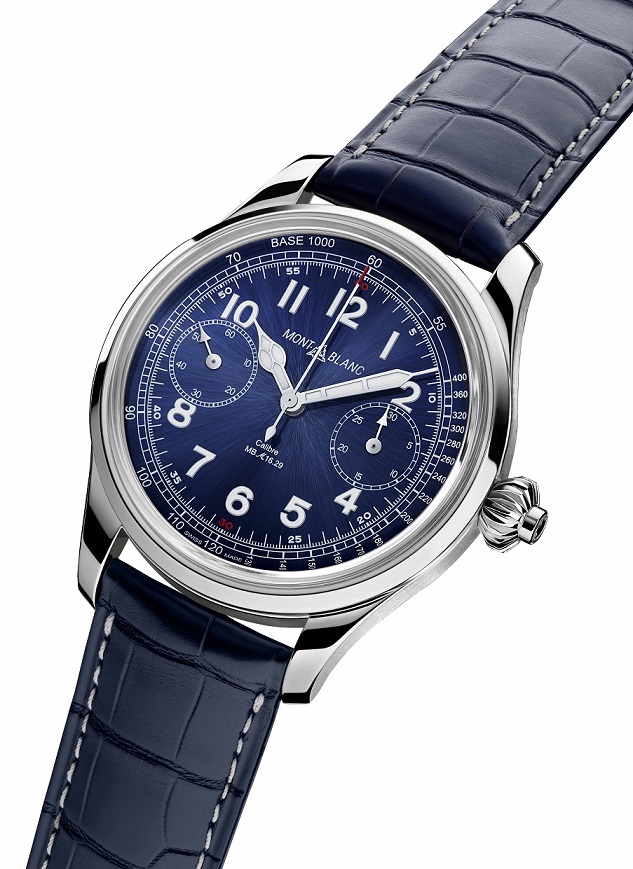 Montblanc pays tribute to the legendary Minerva chronographs with a brand new 1858 Chronograph Tachymeter Blue Limited Edition 100, uniting the reference in chronographs with the innovations of the present. Paying tribute to the heritage of its manufacture in Villeret, founded under the name Minerva and acquired in 2007 by Montblanc, the Maison presents a timepiece inspired by Villeret’s legendary Minerva chronographs. The prestigious Minerva manufacture was the reference in the field of chronographs and stopwatches during the 1920s and ‘30s. These legendary timekeepers were able to measure fractions of a second with the utmost precision - a feat of horological manufacturing for the time. Calibres such as the reference 13.20, launched in the 1920s, were among the very first to be conceived specifically for wristwatches, while the Calibre 19.14, unveiled in 1936, could measure the hundredth of a second. Montblanc’s split-second stopwatches also gained international recognition when they were used for timing the 1936 Winter Olympics, which reinforced the Maison’s reputation. Most watchmakers outsourced their watch components throughout those two decades, whereas Minerva mastered the majority of its fabrication in-house, including its balance wheels and springs…and the same remains true today. This year, Montblanc continues this passion for fine watchmaking by honoring Minerva’s emblematic chronographs of yesteryear with a new manufacture 1858 Chronograph Tachymeter Blue Limited Edition 100. Inspired by a monopusher chronograph from the 1930s, this new limited edition of 100 pieces captures the innovative spirit of the decade by uniting a number of the original design features with one of Villeret’s most elegant manufacture, hand-wound chronographs - the Calibre MB M16.29 featuring a column wheel and a horizontal disc clutch. On the historical side, a fluted crown with a coaxial push-piece is reminiscent of the early crowns that were designed for easy grasp, while the elegant dial, with its large white luminescent Arabic numerals and a railway track, is also typical of the period. The small seconds at nine o’clock, the chronograph 30-minutes counter at three o’clock, the retro Montblanc logo, used from the beginning of the 21st century, and the large “cathedral” hands, with their cloisonné design filled with white Super-LumiNova®, all stay faithful to the original design. Montblanc’s 1858 Chronograph Tachymeter Blue Limited Edition 100 celebrates both traditional Swiss artisanal watchmaking and the rich heritage of Montblanc’s Villeret Manufacture, but offers a contemporary twist to the past with a large 44 mm stainless steel case with slightly enlarged lugs, to keep the proportions of the case the same. The addition of a deep blue dial with a tachymetric scale for measuring speeds over distance, along with a matching blue alligator strap, also contribute to reinforcing the vintage look of this historical timepiece.
Posted by mylifestylenews at 12:00 AM