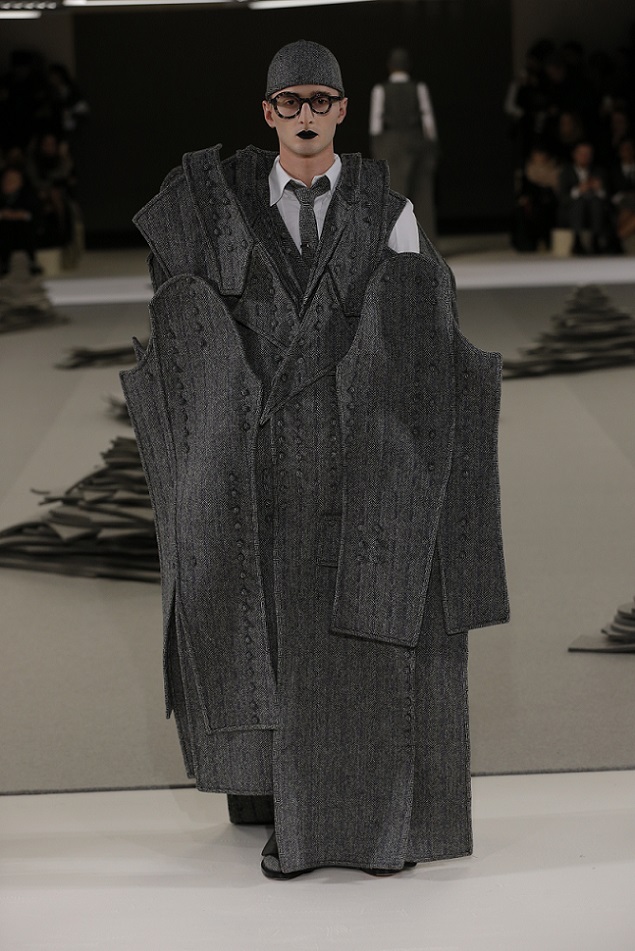 Thom Browne AW2017/18 Men's Collection show took place in a square room with a grey square wool felt stage. On the stage there were 30 piles of wool felt cut pattern pieces, neatly stacked and each pile spotlighted by an overhead fluorescent office light. The show started with 15 models walking out in tight fitting body suits covered in buttons delineating the lines of the various tailored suiting shapes almost as if a tailor had made the markings of the pattern pieces on a body form. 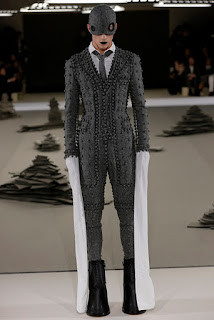 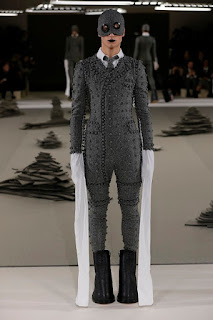 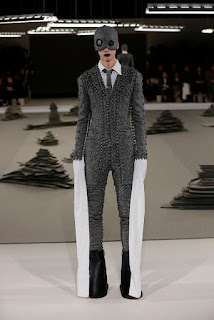 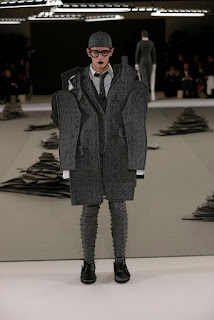 Upon closer inspection it was evident that each of the pattern pieces making up the suit shape on the body suit were meticulously cut and buttoned onto the base body suit. They wore helmets with mismatched eyeholes and platform elongated wingtip brogues and shirts with extra long sleeves that dragged along the ground as they walked. 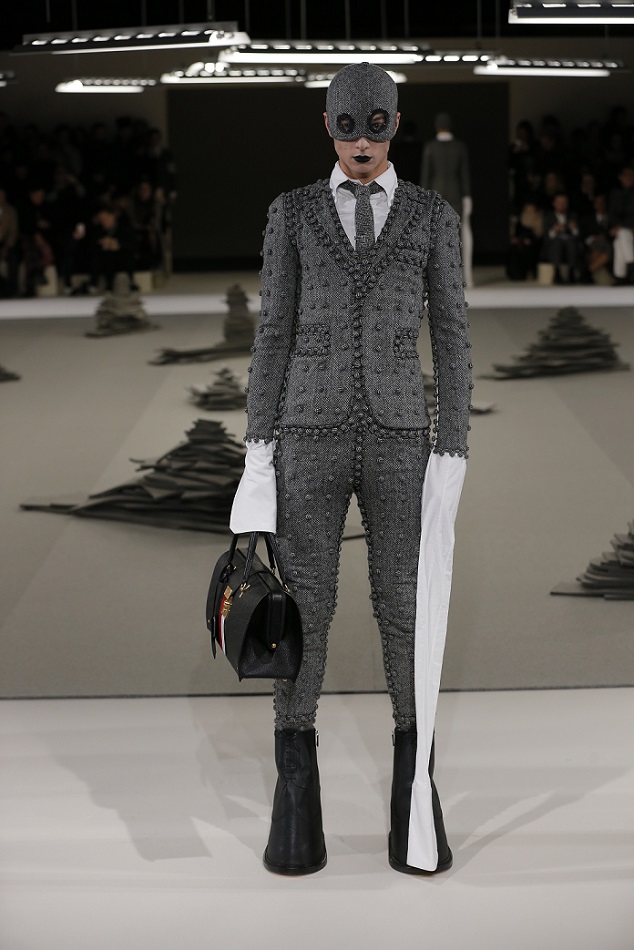 Then the next 15 models walked out each wearing the same style body suits with gridwork of buttons and cut pattern pieces layed flat and attached to the bodysuit using the buttons to showcase the flat pattern pieces making up each of the tailored suit styles including wingtip brogues with flat pattern pieces showing the construction of the shoes. 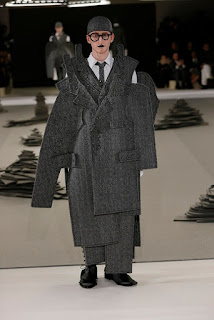 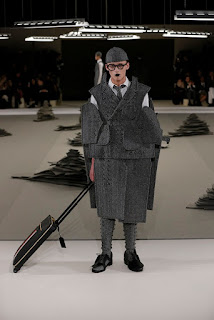 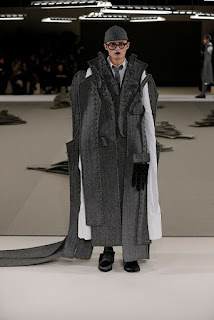 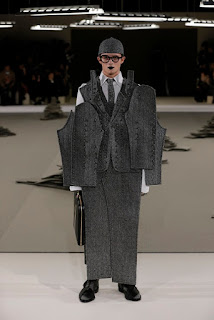 The final group of 15 models walked out again wearing the same body suits with the flat pattern pieces buttoned together where they would normally be sewn to show the final construction of the three dimensional tailored suits. In this way the three stages of the construction and tailoring of the suit were showcased and highlighted the pattern cutting process involved in the creation of the suits from the collection. 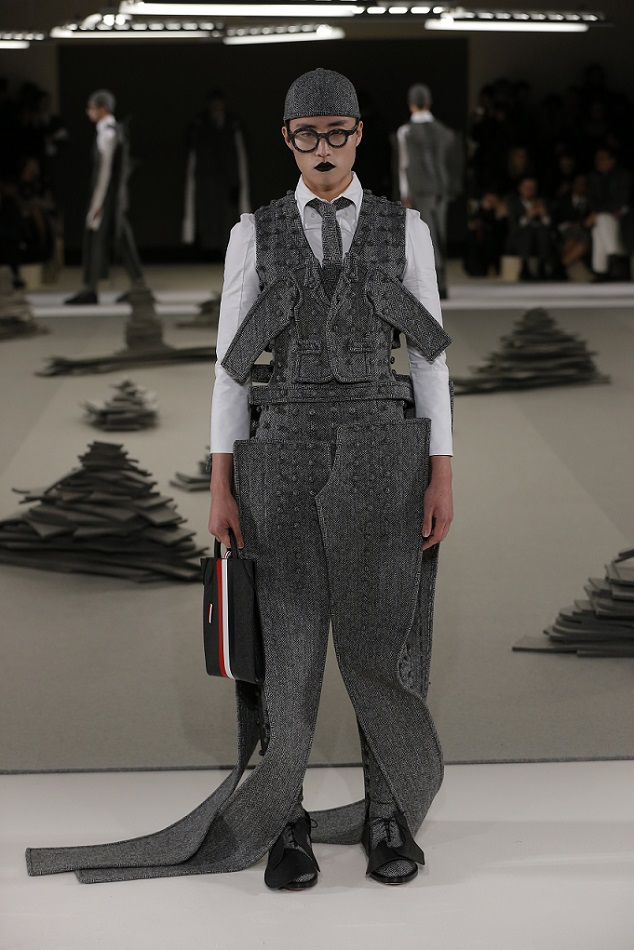 The silhouettes of the suits included the three classic styles of suits Browne is known for - the 3 button jacket and back strap trouser, the slightly more relaxed Sack jacket and trouser, and the slimmer high armhole jacket and skinny trouser shown with Chesterfield overcoats, Sack overcoats, and high armhole overcoats. The play of proportion was shown through the various exaggerated body shapes, sleeve and trouser leg lengths as well as through the use of asymmetry in the suiting. All suiting was shown in the same grey Harris tweed fabric so that the focus was brought on the tailoring and shapes. 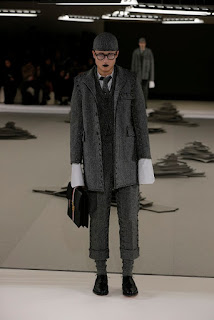 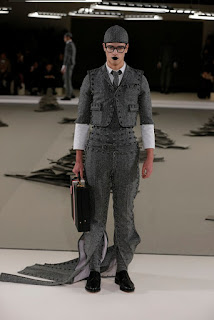 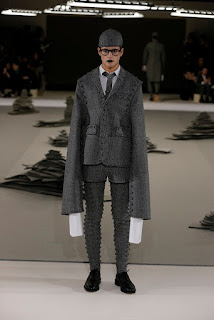 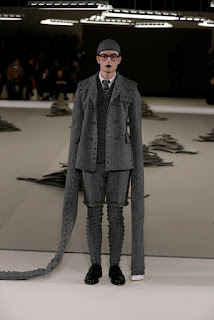 Accessories this season included the classic black leather bags and briefcases but also done in oversized and shrunken down versions as well as a range of leather luggage in various sizes. The hats were made in collaboration with Stephen Jones. There were two styles of eyewear, a classic round frame style as well as an asymmetrical round frame style. 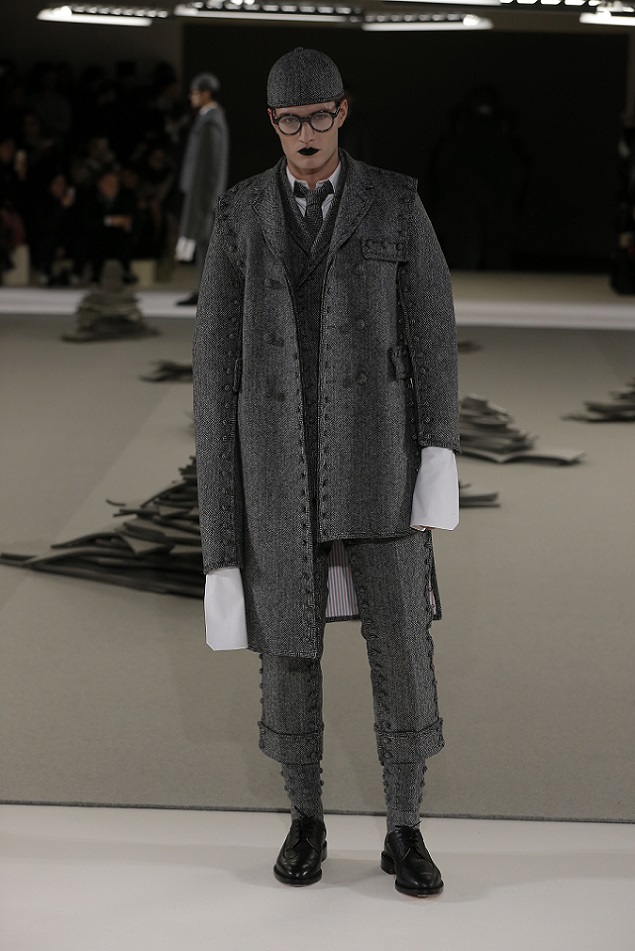 Production:
Back of the House/Anne-Sophie Prevot

Make-up:
Sil Brunsima for Streeters and The M.A.C Pro Team