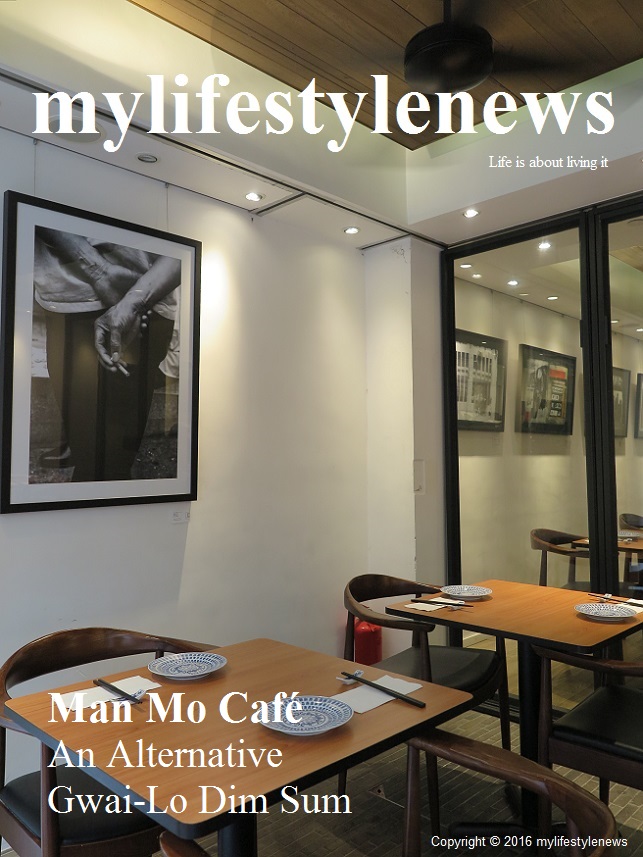 Located just off Hollywood Road amongst the antique shops and trinket stalls in a laneway on upper Lascar row, Man Mo Café has been a curious addition to the dining scene in Sheung Wan for its “Eats” meets West fusion dim sum concept and one of the not so many eateries that run by a team of Westerner from Europe. By mylifestylenews. 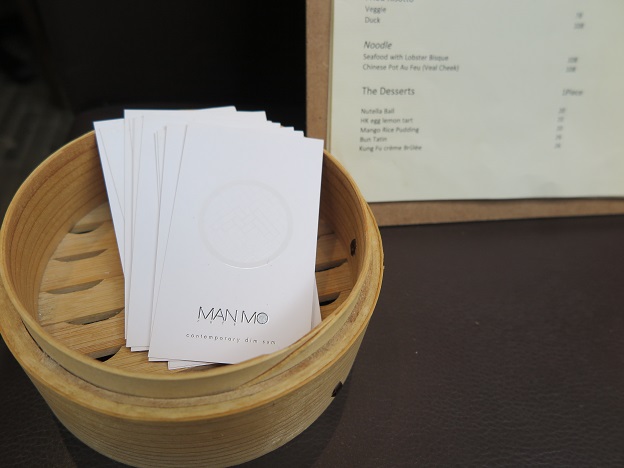 Obviously Man Mo Café is named after the nearby infamous Man Mo Temple for its neighborhood nostalgic sentiment. With Hong Kong being a dim sum lover’s paradise, we are always spoilt for choice but as you know, there are quite a few individually run dim sum eat outs arise recently that trying to avoid by operating in big scales like the traditional “Cha Lau” – Tea House which required lots of skillful dim sum master to make it work. And yet, not everything is what you expect, plus locations can be quite unusual as well which some of them gradually become a hidden gem. 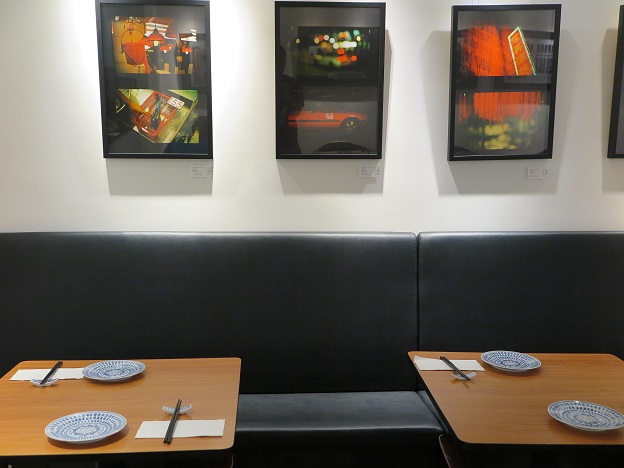 Man Mo Café is relatively small, wooden floor boards with minimalist design and décor in the dining room only lighten by the sellable art work and photography hung against the backdrop of the white walls. Looking up to the ceiling, you will see the wood carving with a giant dragon encompassed the entire dining area. Man Mo Café plays with the contrast of the old and new, the use of traditional blue and white Chinese porcelain chinaware adds that oriental touch before you start tasting the food. 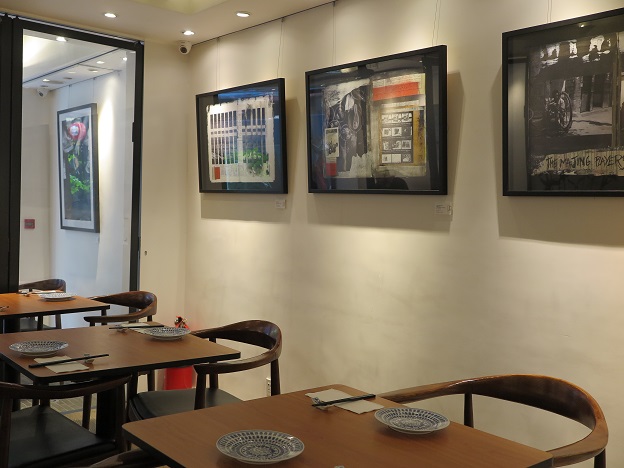 Looking at the short menu, on the surface you are thinking they are trying to elbow into the dim sum competition, but when you examine the names and ingredients of each dish and note that there is a female chef of European origin helming the kitchen. A Gwai-Lo aka white Westerner selling not so traditional dim sum and trying for something different with surprised abound. Either it was done in pretension or smokes and mirrors, at least their guts tells you they can. We tried to sample a good overview to understand their approach to fusion dim sum despite not everything brought us the elevated dim sum flavors, there are still some highlights that would draw for that flavor hit when you crave for it. Warning! Do not expect traditional Chinese dim sum flavor in Man Mo Café as this will only disappoint you if you do so. 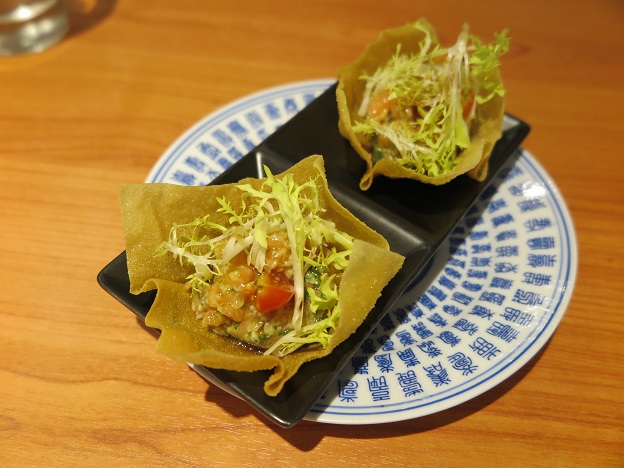 <Salmon Tartare Wonton>
Deep-fried Chinese Wonton paste to crispiness loaded with salmon tartare and buried with leafy greens. The chunky wonton easily make a mess with the fillings spilling out especially it is not prepared for mouthful purpose. 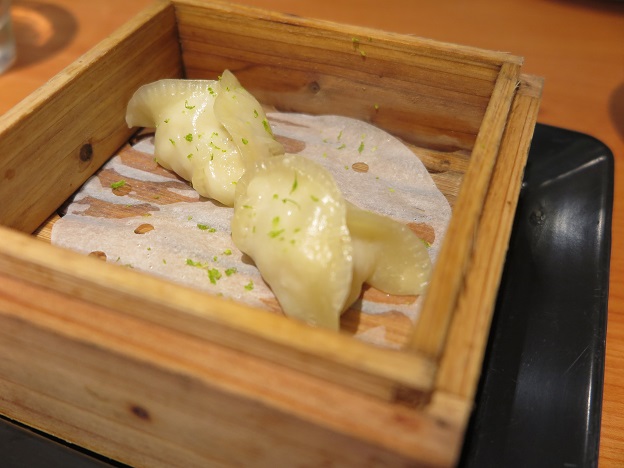 <Sea Bass Dumpling>
Two little fishes steamed sea bass dumpling as bland as its taste and the sea bass itself was indistinguishable. 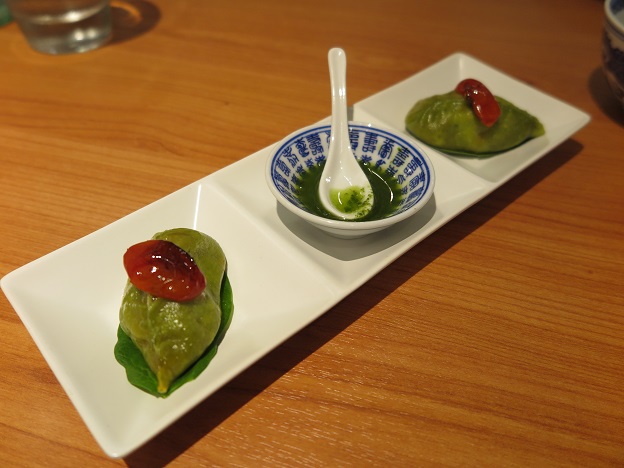 <Tomato & Mozzarella Dumpling>
More like an Italian ravioli instead. Treat it like enjoying an Italian treat with pesto sauce that sits on a baby spinach leaf. 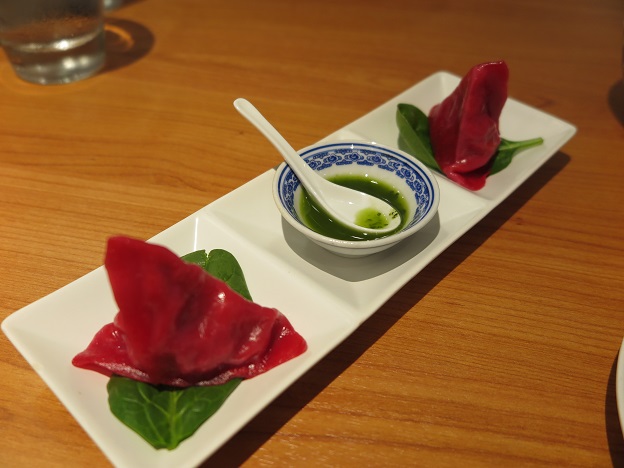 <Ratatouille Dumpling>
Same presentation and pesto sauce dipping as the Tomato & Mozzarella Dumpling with a change of French ratatouille filling. Not much for a surprise. 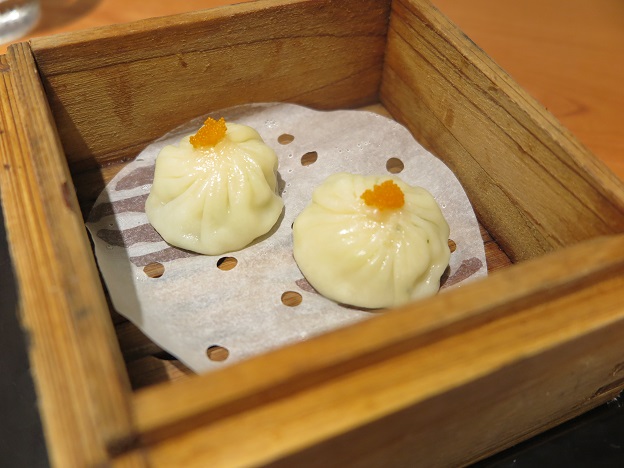 <Scallop Xiao Long Bao>
The paste of the Xiao Long Bao is rather thick and lacking of juice inside. Quite bland in taste and almost can’t taste the scallop. 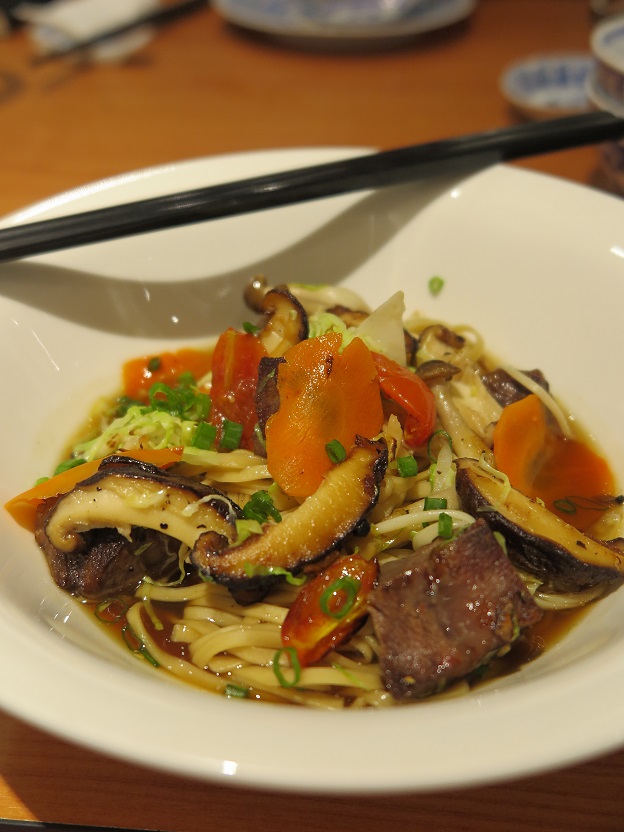 <Chinese Pot Au Feu (Veal Cheek) Noodles>
A real stand out dish! The soup and the veal cheek is heavenly despite the noodle was not married with the soup as well as it should be, Yet, this is the highlight of what we have tasted overall. A must order. 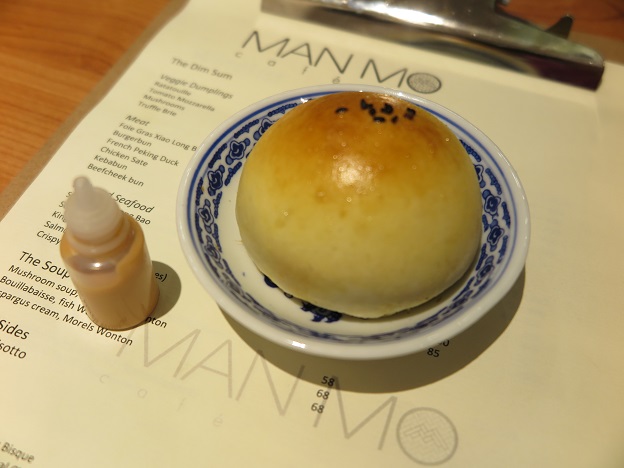 <Burger Bun>
This comes with a little tube of thousand island infused sauce for you to squeeze into the bun to enhance the flavor.  Very dry bun texture and the beef filling is lacking for any complexity. 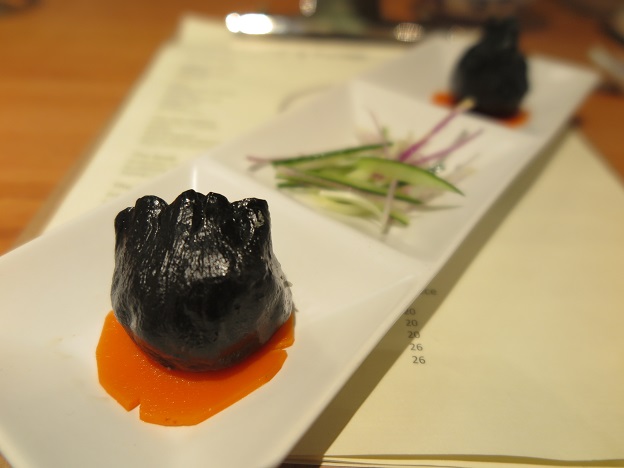 <French Peking Duck Dumpling>
Dry duck ragout are used instead of roasted duck meat that wrapped with the black dumpling paste. The marinated sauce is too salty and this dish has totally lost the essence of Peking duck spirit. 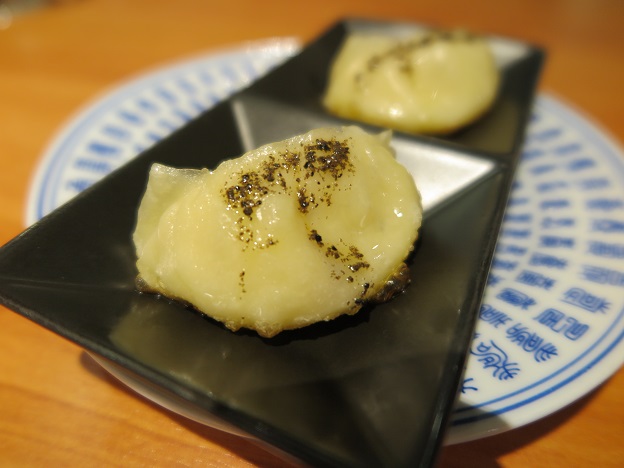 <Truffle Brie Dumpling>
Back to the dumpling and this is catered for cheese lovers and  which is quite a surprise flavor for dim sim serving and now you may get the picture that Man Mo café is not trying to be Cantonese or Chinese, but a Gwai-Lo take on the Chinese treasure. This dumpling has a very strong cheese flavor and the truffle overtones were not too dominant. 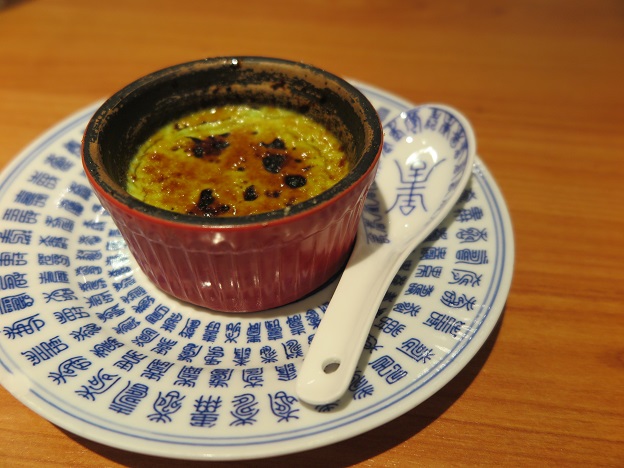 <Kung Fu Crème Brulee>
A classic rendering a French classic with pandan flavor!  A lovely burnt top and the lightness of the crème underneath that could easily pleases everyone. 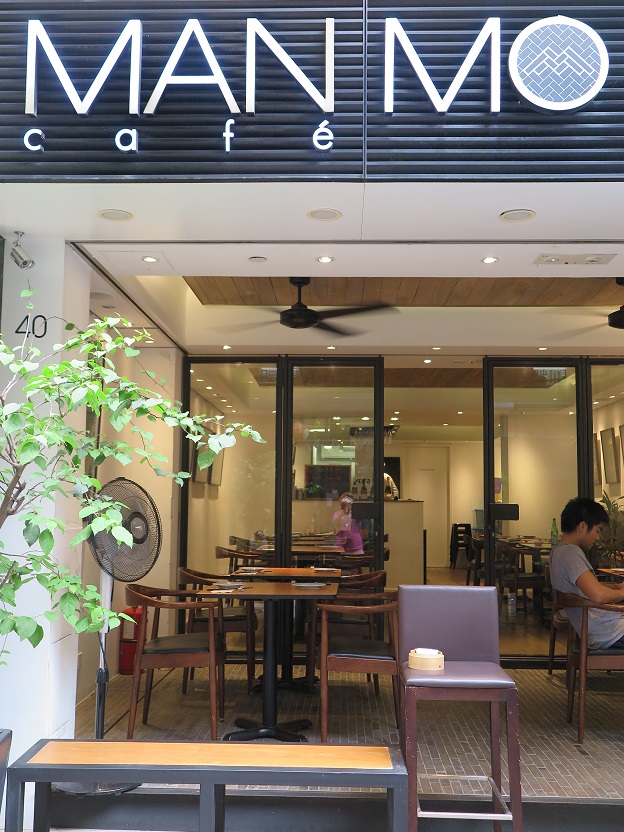 Man Mo cafe has the courage to do dim sum in their way they believe in and not be bogged down with traditions, you have to take your hats off to them. Despite many tastes remind you of French or Italian flavors, but why not if you are not aiming to replicate what everyone else is doing in Hong Kong and beyond. Without a doubt, Man Mo café is certainly not catered for your fussy mom and dad type that fancy only over the traditional dim sum classic but targeting western diners. But once in a while, for a change of surprise, why not!

Email ThisBlogThis!Share to TwitterShare to FacebookShare to Pinterest
Labels: 《EATING OUT》, 《LIFESTYLE》, 《WINE AND DINE》