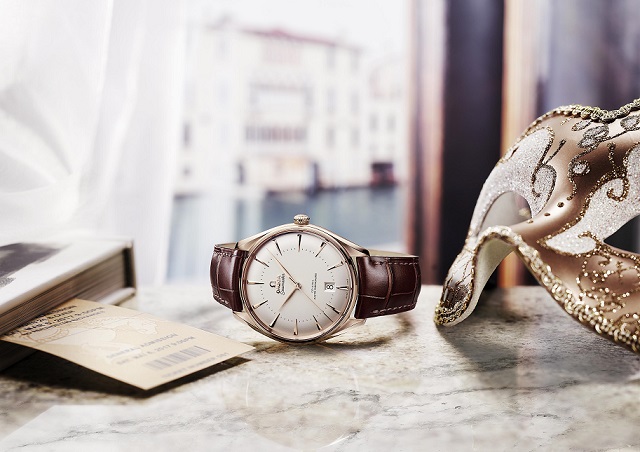 OMEGA unveiled its new collection of Seamaster “Edizione Venezia” watches, which are to be sold exclusively in the famous Italian city. The decision to create a watch in tribute to Venice is no coincidence. In the late 1950s, Venice provided the inspiration for one of OMEGA’s most famous symbols! At that time, the OMEGA Seamaster was a relatively new collection and it beautifully represented the brand’s famous diving heritage and ocean spirit. All it needed was its own unique emblem. The answer was found by a member of OMEGA’s design department. He had already created the iconic “Observatory” medallion that the brand used for its Constellation models. But it was on a visit to Venice that his imagination was captured by the famous gondolas and the beautifully sculpted representations of Neptune’s Seahorse on each side. For OMEGA, Venice embodied the meeting point of culture, history and elegance – perfectly matching the attributes of the Seamaster models. Just like OMEGA’s own pioneering heritage, Venice also represented a place where many ocean explorers had once begun their voyages. Upon seeing the exquisite craftsmanship of the Seahorse, OMEGA knew that a symbol for its Seamaster collection had been found, and the emblem began appearing on models from 1957. The domed opaline-silvery dial on each model draws its design influence from the vaulted ceiling effects of Venetian architecture, and features 12 applied indexes as well as elegant “leaf” style hands. The Venice theme even extends to the spherical crown, which follows the shape of the dome of St Mark's Basilica and gives the timepiece a classic, timeless look. Turning to the other side, the caseback is one of the distinguishing features of each watch. The famous Seahorse medallion has been laser engraved on sapphire crystal and the words “SEAMASTER” and “Edizione Venezia” have been transferred onto the inner caseback ring. There is also a transferred pattern which closely resembles the intricate detail of Venice’s own flag. Two different styles of the Seamaster “Edizione Venezia” are now available to customers – either with an 18K Sedna™ gold case on a brown leather strap, or a stainless steel version on a black leather strap. Both versions come presented in their own special black-lacquered presentation box, lined in burgundy velour reminiscent of a Venetian gondola's interior. With a Master Chronometer calibre of the industry’s highest precision, and a design story filled with true OMEGA heritage, these new models are sure to appeal to collector’s the world over. They can be purchased only at the OMEGA Boutique in Venice, or at T Fondaco dei Tedeschi by DFS.
Posted by mylifestylenews at 12:00 AM