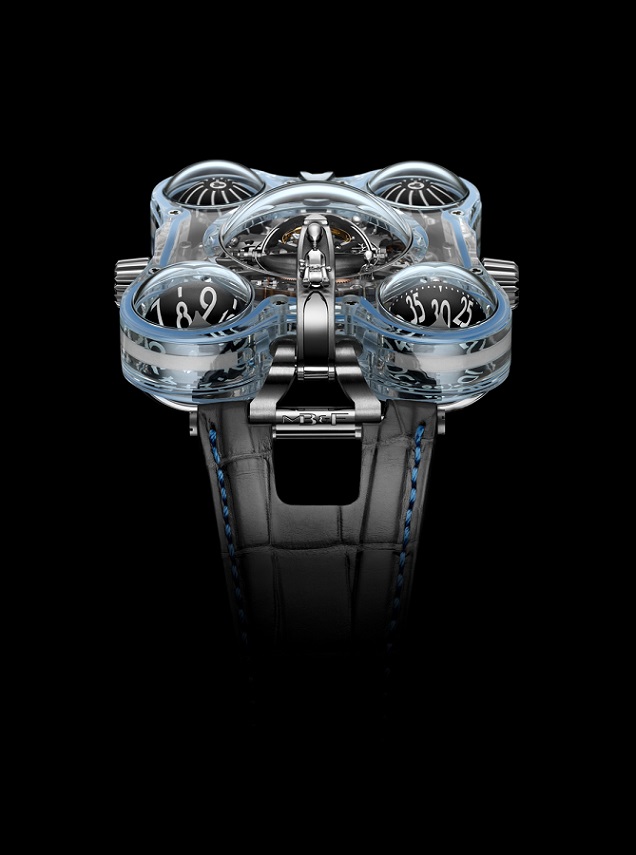 It was 70 years ago that an unidentified flying object crash-landed in Roswell, New Mexico, sparking wild tales of alien visitations and government cover-ups. The nuclear age was slowly but surely giving way to the space age, and science fiction was becoming modern myth. Hence, the crew of HM6 Alien Nation are not unfamiliar to us, even if they may have come from a different solar system. Tales of little green men with oversized craniums and shiny black eyes populate the realm of extraterrestrial science fiction and our imaginations. In addition, those passionate about mechanical watchmaking, particularly the strain of modern independent watchmaking that MB&F embodies, will feel deep affinities with the concept of being a community apart, a tribe with its own codes and culture. The MB&F Horological Machine N°6 Alien Nation is an intergalactic vessel piloted by a silvery-skinned captain and his quintet crew, enigmatic explorers ready to brave a new world. Four Pièces Uniques combining mechanical complexity, extreme artisanship and a near-to-impossible case in sapphire crystal.

The first two series of HM6, the Space Pirate and Sapphire Vision, were unmanned vehicles. This year, MB&F decided it was time to put someone in the captain’s seat. MB&F founder Maximilian Büsser says, “I first came to love watches because I saw them as these machines that were imbued with life.” HM6 Alien Nation is the literal expression of this metaphor. Its alien inhabitants are not passive passengers; they scurry around the HM6 engine, fixing the turbines in the aft, adjusting the gears, hand on throttle, scanning the space ahead. Even when frozen into micro-sculptures of white gold, they are bursting with energy (except for one particularly large fellow, loafing in a corner just out of sight of his captain). Each of the six aliens is individually modelled and hand-sculpted in white gold by engraver Olivier Kuhn. The arms and necks of the aliens are finer than grains of sand, each alien requiring up to 34 hours to complete. Count more than a month of full-time work for the crew of six. As would befit spacecraft coming from an alien civilisation with highly sophisticated technology, HM6 Alien Nation is completely transparent, being formed entirely of sapphire crystal with reinforcing elements in Grade-5 titanium. To be precise, 12 separate blocks of sapphire crystal requiring up to 510 hours of machining and polishing. During the process, breakage is unfortunately frequent, often reducing hundreds of hours of work to zero… And then comes the assembly: the 12 crystals must come together perfectly to present a seamless whole. 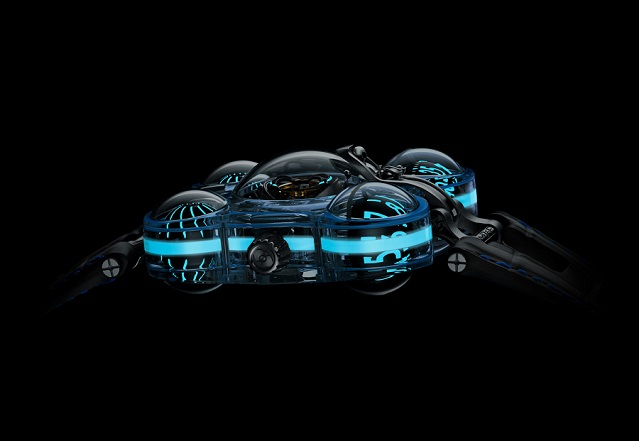 Alien Nation’s crystal-clear skin reveals the radical HM6 engine, the result of 3 years of intense development: a highly complex, totally unconventional construction of 496 finely-finished components. Topped by a 60-second flying tourbillon with retractable shield, the mechanism drives twin hour and minute domes rotating perpendicularly to the movement. Regulating turbines are coupled to the winding rotor. The interior of Alien Nation is shot through with thick bands of high-performance luminous material called AGT Ultra. There will be four unique pieces of HM6 Alien Nation, differentiated by their accent colours: green, blue, purple and turquoise. Each one is on a mission to seek out a new home on this planet. The truth may be out there, but the course of the MB&F Horological Machine N°6 Alien Nation is locked on Earth.

MB&F launched Horological Machine N°6 in November 2014, all biomorphic curves and brushed metal in its inaugural edition, known as Space Pirate. Just over a year later, at the beginning of 2016, the HM6 Sapphire Vision followed, with the uppermost and lowest sections of the case in transparent sapphire crystal, sandwiching a centre segment of platinum or red gold. The initial sparks of inspiration for HM6 came from a 1970s and 1980s Japanese anime TV series called Capitaine Flam, featuring the eponymous captain and his improbably bulbous spaceship. Though ostensibly set in the future, the aesthetic of Capitaine Flam was closely associated with contemporary designers such as Luigi Colani and his love of curved, organic forms. Horological Machine N°6 borrows against this decidedly provocative design philosophy, delivering unexpected sensuality in a biomimetic shell of brushed titanium. The Sapphire Vision edition of HM6 took graphic elements from a travel icon of the 1950s and 1960s - American Greyhound buses of the so-called Streamline Moderne era, with their lateral grooves and bright metal sidings. Every aspect of the HM6 engine is constructed to intersect neatly with this retro-modernist take on space travel and technology, from the sleek whirling turbines with curved fins to the cinematic flying tourbillon with its manually operable shutters. The signature MB&F battle-axe appears in two places in the HM6 engine - in single-headed form for the rotor, and double-headed for the upper tourbillon cage. There were 68 pieces of HM6 Space Pirate (50 in titanium and 18 in red gold/titanium) and 20 pieces of HM6 Sapphire Vision (10 each in red gold and platinum). Including the four unique pieces of the Alien Nation edition, there are currently only 92 pieces of Horological Machine N°6, making HM6 considerably rarer than a UFO sighting. And for those keeping count, this means that there are only eight more HM6 engines left to go.
Posted by mylifestylenews at 12:00 AM

Email ThisBlogThis!Share to TwitterShare to FacebookShare to Pinterest
Labels: 《ART AND DESIGN》, 《WATCHES》