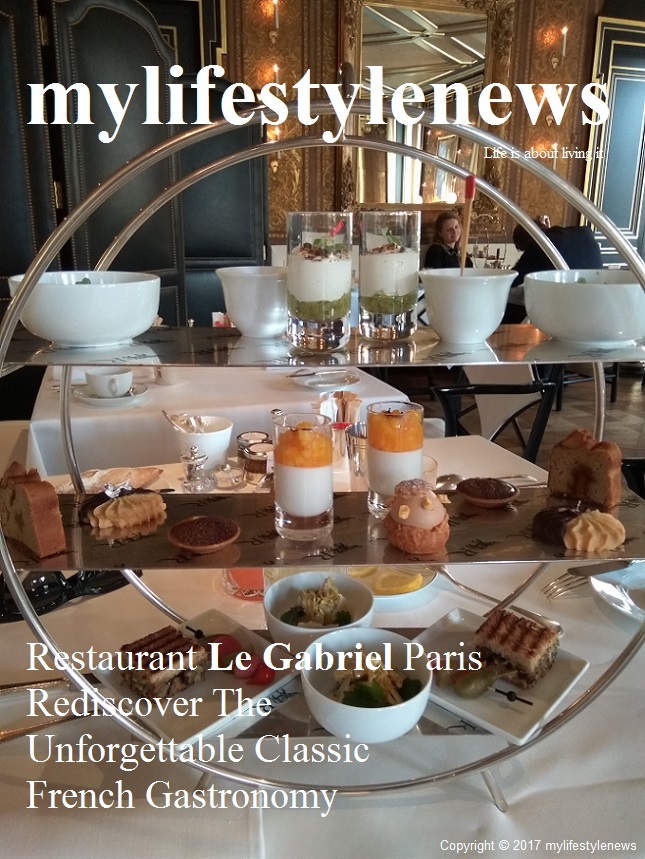 When you are booked in any Michelin starred restaurants in Paris, you will have certain expectations as they are carefully chosen and professionally honored. Not only the food has to win over your taste bud but also the immaculate service level offer is also part of the entire honorable experience. And of course, the location and elegant ambience would be an added value score. mylifestylenews writes. 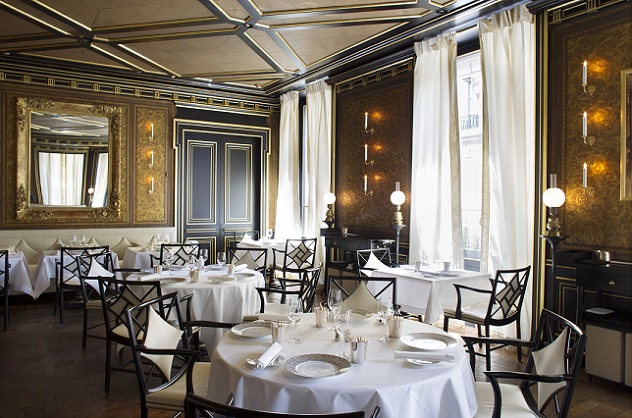 Located along the historical Avenue Gabriel, this esteemed establishment magnificently embodies the quintessence of the Haussmann spirit to perfection. This highly sought after 8th arrondissement won acclaim from the beginning of the 19th century. Over the years, the emergence of the famous nearby “Golden Triangle” has made this quadrangle even more valuable – to the point of it becoming the symbol of Parisian lifestyle. In a capital as stimulating as Paris when it comes to gastronomy, two Michelin starred Le Gabriel at La Réserve Paris Hotel and Spa rises ably to the challenge by offering contemporary French cuisine inspired by the seasons. 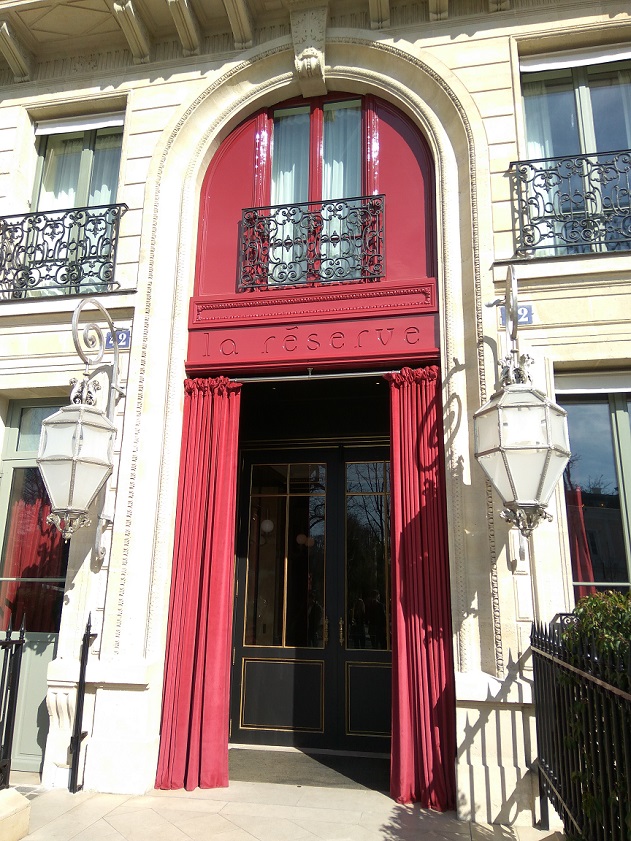 You won’t miss the classic French ceiling high red door when you are approaching La Réserve Hotel and Spa along Avenue Gabriel. Before entering the building, this Haussmann urban mansion or bourgeois luxurious dwelling is there to be admired. Having being sent a reminder email by the F&B team to confirm our booking at 12:30pm with reservation made weeks ago and still couldn’t be found upon arrival, it was not quite a pleasant surprise for a two Michelin stars establishment. After a few moments of checking later, the reservation still couldn’t be found, so the hostess decided to lead us into the restaurant by passing through the intimate lounge and bar with the connecting door to the highly anticipated Le Gabriel restaurant. The interior is a typical early 19th century Haussmann style, the décor enshrines the essence of Parisian chic and a peerless style legacy. With the immense space bathed in light, the entire room is barely muted by the rich fabrics of the hangings echoing the worked façade that is adorned with Corinthian columns. The architectural interiors are reminiscent of the traditional canons of the era and provide an exclusive setting in which the French art of living is lived out in complete intimacy and simplicity. 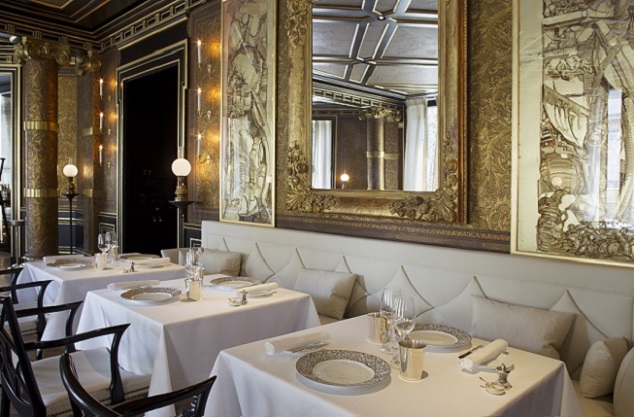 We were seated immediately by offering the brunch menu created by Executive Chef, Jérôme Banctel who has just joined Le Gabriel exactly one year after its opening.  Banctel’s contemporary French cuisine is inspired by the seasons and his approach implies unforgettable dished to be discovered and rediscovered in all their natural glory: enhanced yet never disguised. Moving away from the traditional heavy dishes associated with French cooking, Banctel creates delicate plates with an approach that ensures all his dishes are bursting with flavour. 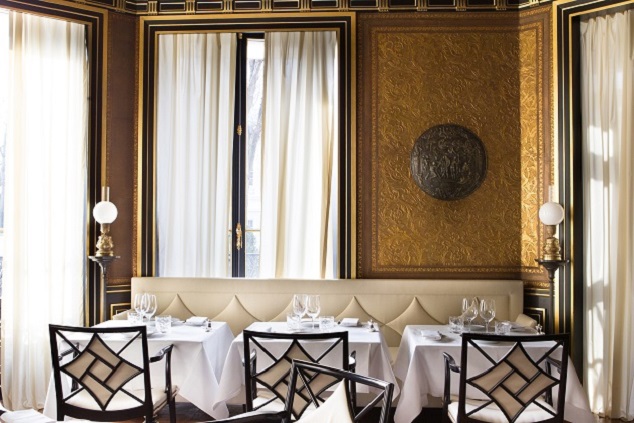 The brunch menu was quite a selection especially the starters are prepared in small bites and served on a three tier round tray like it is used for afternoon tea. Un assotiment de pieces salees (Salty delicacies selection) comes with: 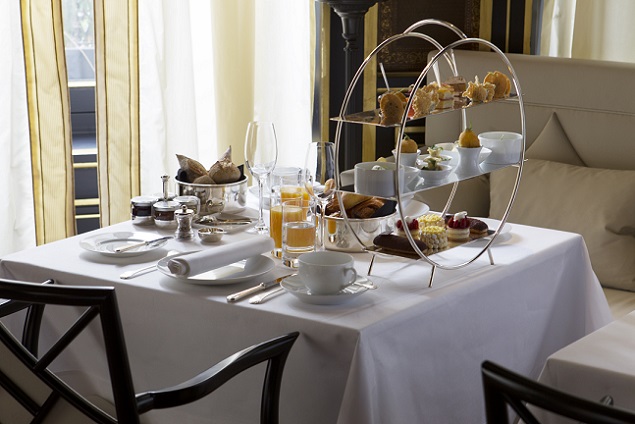 The good thing is you don’t have to worry on what to pick as both salty and sweet selections are part of the Brunch deal. This is an excellent opportunity, especially for the first timers dinning in Le Gabriel, for being able to sample more than 10 dishes carefully crafted by Banctel and his team. But the down side is, you may be sampling some dishes that you may not like or are allergic to, especially for non-seafood patrons or its nut dishes. Service was a little too fast and we were hurried to finish the tray of starters and not in time to enjoy much of the well-prepared varieties and followed by the cette semaine which means this week special Toure de canard, jeunes pousses croquantes (Duck pie salad). 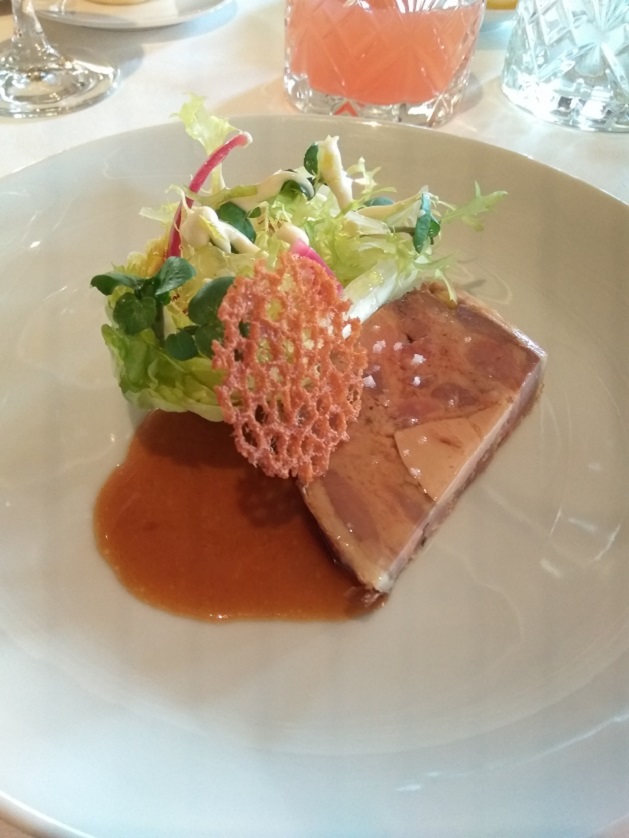 We had no choice but to move forward before the next dish was being left unattended. The managers came around to our table a few times and also keeping an eye to other diners who filled three quarters of the room. Wine pairing was not offered until we asked for the service which is not quite what we expected in a two Michelin-stars restaurant. However, their own production of wine mainly from an exclusive winery and should not be missed, especially their champagne. 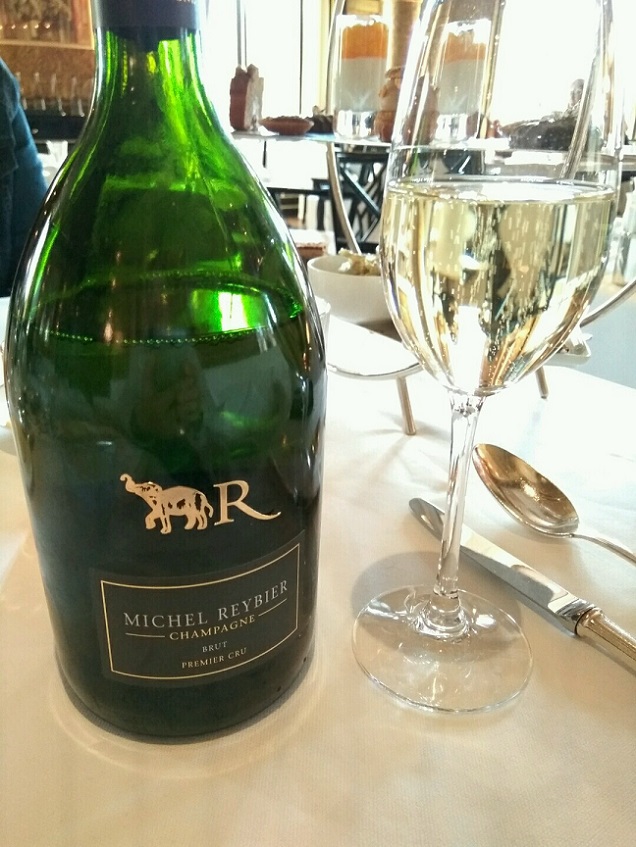 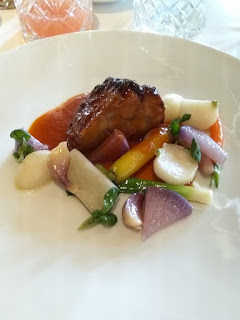 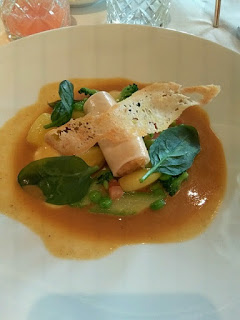 As for main course, you have a choice of Encornets roti, bouillons de poisons de roche au safran (Stuffed squids, rock fish broth and saffron) which is the highlight of the meal with such creation that is absolutely to die for or Epaule d’agneau de lait confite, legumes primeur (Candided suckling lamb shoulder, season vegetables) which is another triumphant creation by Chef Banctel. Simply not to be missed. 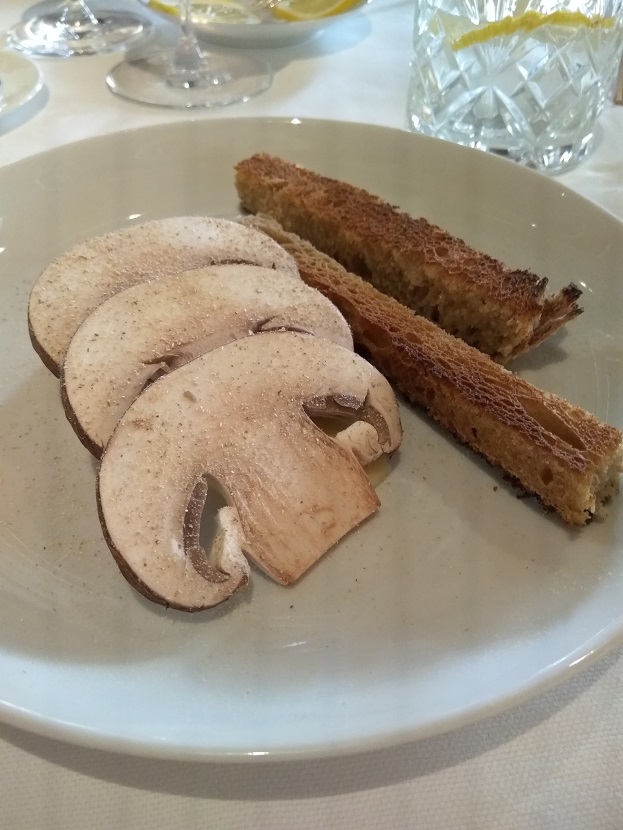 Pre dessert came with Saint Nectaire fermier, champignons crème (Farm Saint Nectaire, mushroom) which is also a dish by itself. A palate cleanser? No, but it is certainly another brave creation by using the seasonal produce. 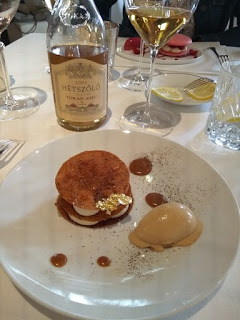 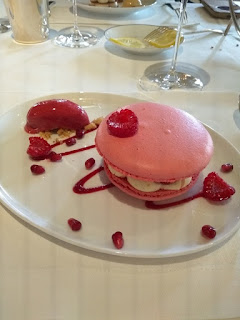 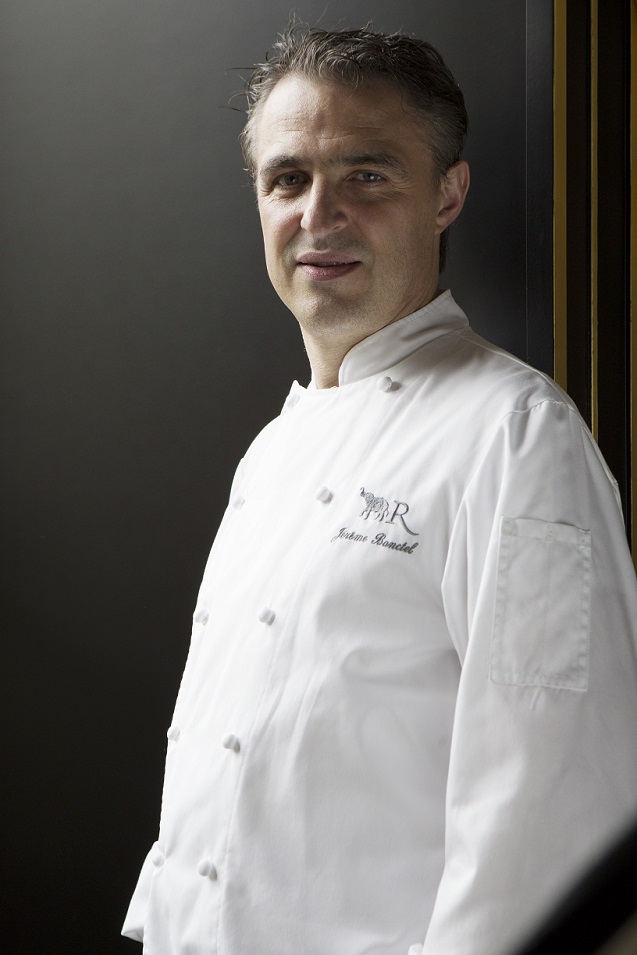 The French contemporary cuisine of Le Gabriel restaurant borrows culinary inspiration from all over the world, to offer an exquisite take on the great classics. The result is a cuisine entirely in tune with the philosophy cultivated by La Réserve owner, Michel Reybier, who advocates “Excellence dedicated to serving a clientele that must be able to dine here on a daily basis and consistently find exceptional dishes." His respect for nature and its produce go hand in hand with inspiration from around the world, surprising discerning palates with his modern interpretations of the great classics. This is not about a delirious avant-garde frenzy, but instead just enough creativity to give each dish the excitement of “a first time”. Dining at Le Gabriel required a proper dress code especially for male patrons. The confirmation email replied to our reservation: “To ensure perfect harmony with our restaurant, men are asked to wear a dinner jacket.” We respected that regulation and came with our presentable jacket and yet there are still a few men at the other tables that came in with just their turtle neck t-shirt. We didn’t quite understand such a standard being made. We hope the ‘excellence dedicated to serving a clientele’ would still be a standard practice.