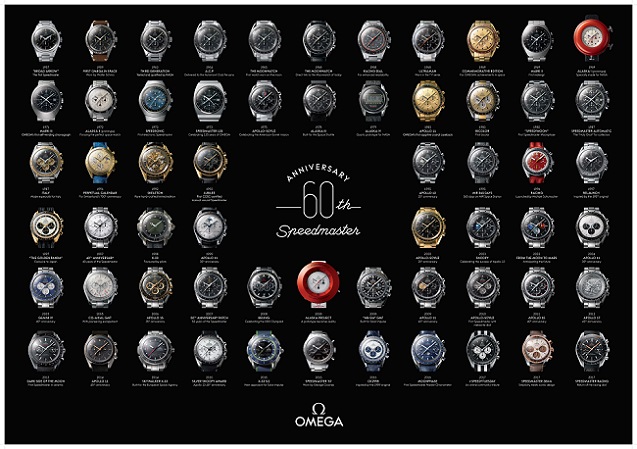 Few watches have the power to inspire like the Omega Speedmaster. The first watch ever worn on the moon, it has become an enduring symbol of the ingenuity and skill that took us into space. On the sixtieth anniversary of the Speedmaster’s release, OMEGA look back with space-enthusiast and brand ambassador, George Clooney, at the heady days of the Apollo program and reflect on why the Speedmaster was able to go where it did. Clooney grew up in the sixties and was eight years old when Neil Armstrong and Buzz Aldrin first set foot on the moon. Like most children of his generation, astronauts were his heroes and going into space was his dream.

Thinking back to that moment in his life, Clooney says, “It was the most exciting time to be a kid. We knew all the astronaut’s names. We even ate the food that the astronauts ate… During one of our vacations, we drove through Neil Armstrong’s hometown, simply because we wanted to drive through his hometown. The astronauts were that big a deal to us. In 1961, U.S. President John F. Kennedy set a bold challenge for the American people. He stated, “I believe that this nation should commit itself to achieving the goal, before the decade is out, of landing a man on the moon and returning him safely to the earth.” According to Clooney, this challenge felt almost impossible at the time, but it did create a new level of optimism that reflected itself in everything that was happening around him.

“In just 60 years, we’d gone from inventing cars to [talking about] landing a man on the moon,” says Clooney, “It felt like the ultimate in optimism, the ultimate in forward thinking. It made us feel like anything could be done.” When Apollo 11 touched down on the moon on July 20th, 1969, and Kennedy’s challenge was answered, the young Clooney watched from his suburban backyard. Standing with his father, looking up at the moon, he felt a special connection with his heroes as they took their first steps into a new world. Like the astronauts they were straining to see, Clooney’s father also wore an Omega. In fact, Clooney still has the same watch today. When Clooney Senior heard that his son was working with Omega, he presented him with his old Omega as a gift.

“He brought it down from the attic, after putting it away for 20 years,” says Clooney, “and he wound it and it started running again. It was a special moment. I grew up with that watch on his arm.” According to Clooney, all the kids knew that the astronauts were wearing Omega watches. He remembers that “Omega was absolutely part of the space program when I was growing up. Omega was about precision time… and it seemed like the space program was a natural progression.” 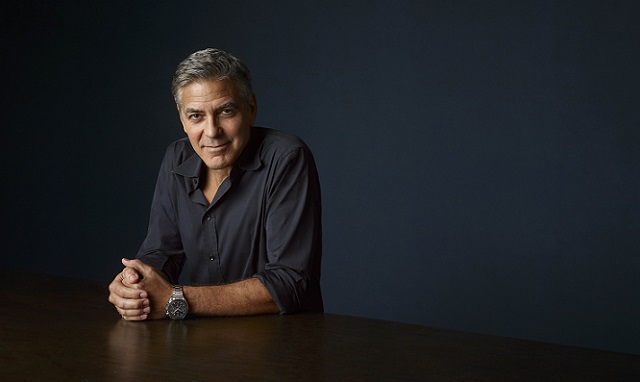 What Clooney didn’t know then, however, was that the Speedmaster was originally envisioned for a completely different purpose. As the name suggests, it was built for speed, and when first released 60 years ago, it was intended not for rocket ships, but for racing cars. Upon release, the Speedmaster was an instant hit with professional drivers. Its rugged construction meant that it could withstand intense vibrations and shocks while keeping perfect time. And thanks to the tachymetric scale on its bezel, drivers could time their laps more easily than ever before. It was the first watch with these features, and at the time, revolutionized the design, durability and functionality of wristwatches. Ultimately, it was these two features that would make the Speedmaster so suitable for space exploration, and would lead to its place on the wrist of every astronaut in the Apollo program from 1965 onwards.

It was in 1964 that NASA began hunting for a chronograph to use on its manned space missions. They chose watches from a number of different brands and put them through the same series of tests that were used for every piece of hardware that was intended for space. Only one watch survived the extreme temperatures, vibrations, hard shocks, and unforgiving vacuums of the testing process – the Omega Speedmaster. Today, six decades on, the Speedmaster is still qualified for all manned space missions and is a permanent piece of equipment on the International Space Station. In testament to the forward-thinking design of the original, the Moonwatch made now is essentially the same as the one released by Omega in the pre-space age.

For Clooney, this makes the Speedmaster a true classic, like a vintage wine. He explains it like this, “Some things are classic, and when they’re classic, you will always want them. You’d be really upset if they changed. We want modern technology – like our cell phones – but there is something about having certain classic things, that if they changed, it would break your heart.” On the inside, the calibre is also unmodified and manufacturing the Moonwatch remains a complex exercise, as it has always been. It takes a staggering 14 months to prepare all the separate component parts prior to assembly, and 80 manual operations are needed to assemble the base plate alone. Like when it was first released, the human hand is an essential part of the process.

It is ironic that the Omega Speedmaster has required no modification, considering that the NASA space program can be credited with technical innovations spanning from mobile telecommunications to SMS messaging, and from solar panels to water purification. As Clooney says, the Speedmaster may well be the true definition of a classic: a design that need never be altered. Further proof of the enduring quality of the Speedmaster’s design can be found closer to home, as a navigational tool for terrestrial explorers. In 1968, Ralph Plaisted used his Speedmaster and sextant to determine the exact location of the geographical North Pole for the first time. Likewise in 1985, explorer Wong How Man used his Speedmaster to help discover and map the elusive source of the mighty Yangtze River. Omega is proud to have played a role in one of the greatest achievements of the 20th century - the moon landing - and looks forward to the many great accomplishments humans will make in the next 60 years and beyond. 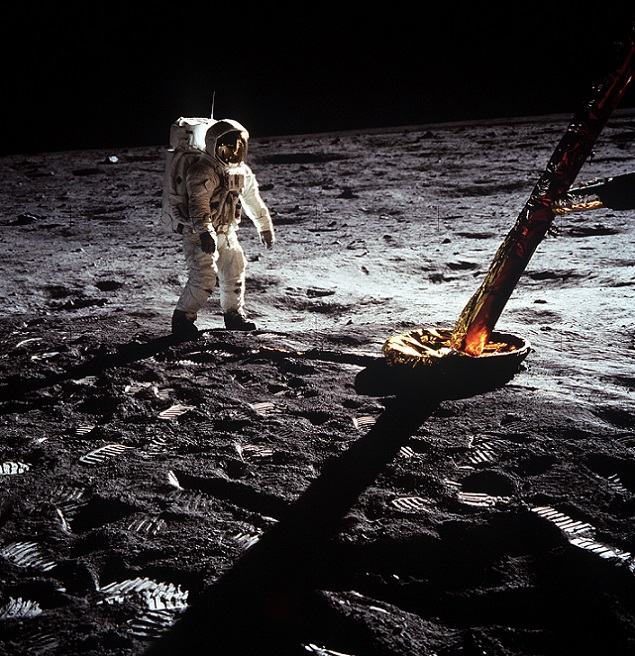 Twisted Lugs
Since 1964, the “twisted lugs” of the Speedmaster have given the watch a truly distinctive look. Their addition enabled the creation of an asymmetric case that provides extra strength and protects the crown and pushers.

Tachymeter Scale
The Speedmaster was the first watch in the world to take the tachymeter scale off the dial and place it on the bezel. The change was initiated with racing car drivers in mind and this is where the “Speedmaster” name originates.

Pure Dial
Loved by watch fans for its understated simplicity, the classic triple-register Speedmaster design delivers superb readability thanks to its black dial with luminous markers and contrasting hands.

Domed Glass
The glass that protects the dial is cleverly domed to give the impression of an overall thinner watch. Over the years, both hesalite and sapphire-crystal glass has been used.

Hands
Aside from the Broad Arrow and Alpha hands associated with early models, it is the Baton style hands that have been most used. Slim and elegantly flat, they further add to the uncomplicated design. 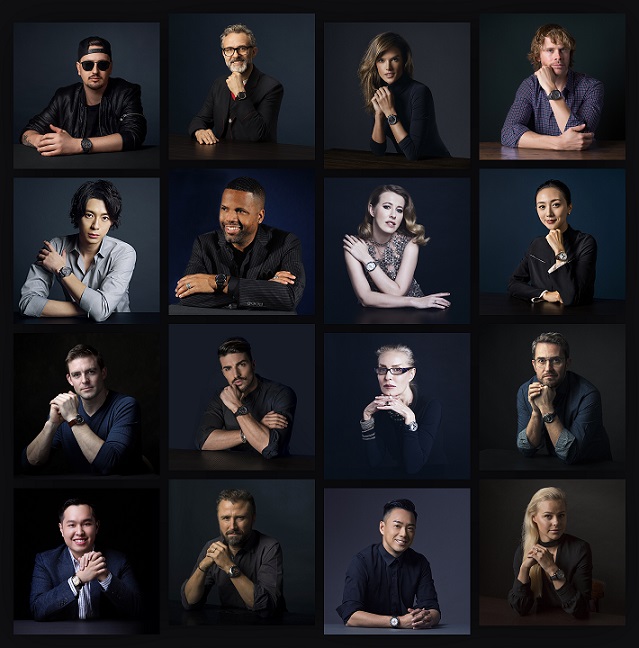 Many stories have been told of the astronauts, explorers and racing car drivers who have trusted the Speedmaster throughout its lifetime, but today, there is a truly diverse community of fans from all over the world. In tribute, OMEGA has tracked down just some of these fans and brought them together in a series of revealing portraits. From actors and chefs to athletes and fashion experts, these people all have one thing in common: They love OMEGA’s famous chronograph. And they have all been photographed to show that the Speedmaster is always close to their wrists, as well as their hearts. Many of the Speedmaster fans may be well-known to the public, such as the Brazilian model Alessandra Ambrosio, Italian chef Massimo Bottura and German DJ Robin Schulz. There are also many other names from a broad range of industries and countries. Each picture will be presented on a dedicated section of OMEGA’s website and visitors can explore each one to understand just how far-reaching the chronograph’s influence has become. Visitors can also upload their own pictures taken in a similar style, with OMEGA choosing the best ones to be included on the site. Through social media, OMEGA will boost the campaign through the #SpeedmasterFans tag, which will further encourage everyone everywhere to get involved and share their love.