UMAI @ The Hallmark of Omakase In Lai Chi Kok 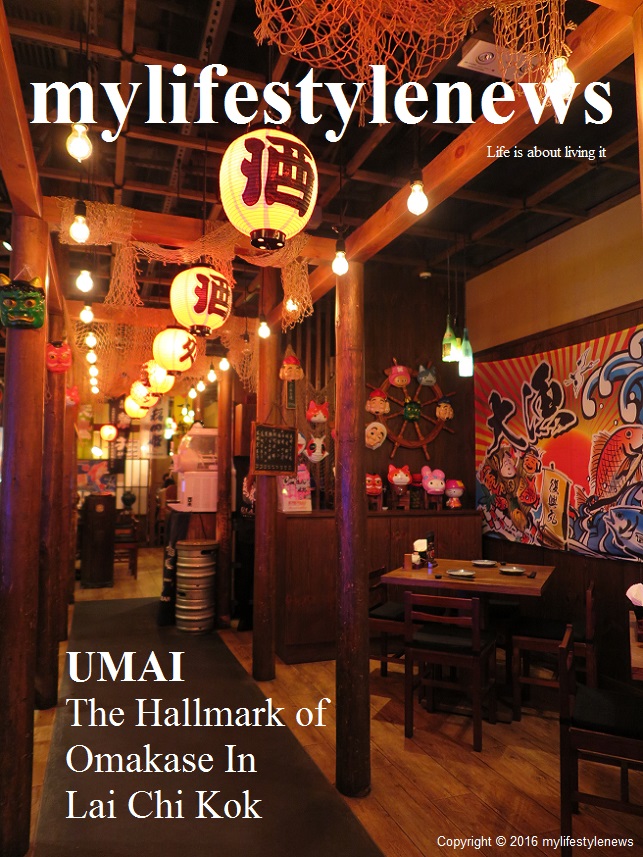 Japanese cuisine is an art and it can certainly establish a point of difference when authenticity is the hallmark, especially when you dine in Omakase, the element of aplenty surprise will always be there. With countless Japanese eateries in Hong Kong, UMAI in Lai Chi Kok wants to bring a taste of Japan in a sincerely authentic way. mylifestylenews writes…… 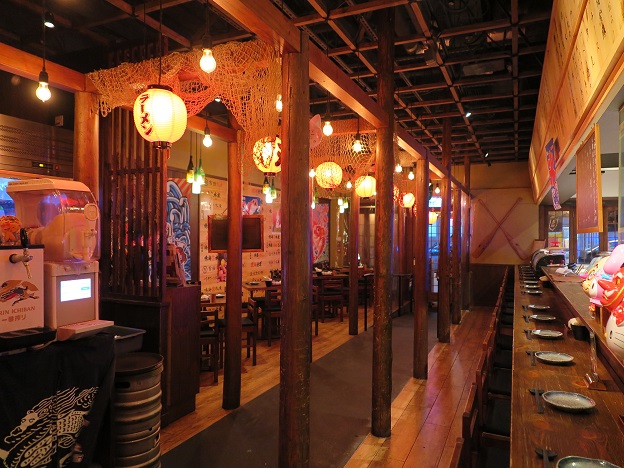 Umai means ‘Dancing Crane’ and such a name can mean grace and elegance. UMAI is the one of the very few Japanese joints that offers serious Omakase – a fancy way to describe a Japanese restaurant or sushi joint, according to some as real Japanese don’t really use the word but somehow people use it to spice up a conversation, depending on how you use it in order not to make you sound like a douche. 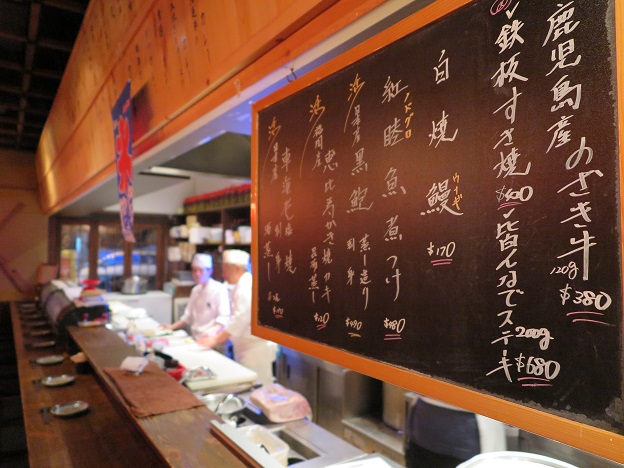 UMAI’s Omakase offers a section with only nine seats where the in house chef from Osaka cooks his daily fresh catch for his seated guests with just a hand stretch away. Almost everything can be seen from the Chef’s culinary skill except some secret recipe that won’t be revealed for sure. With such a not-to- be-missed culinary show in front of you, the food being served is always a surprise, with characters. 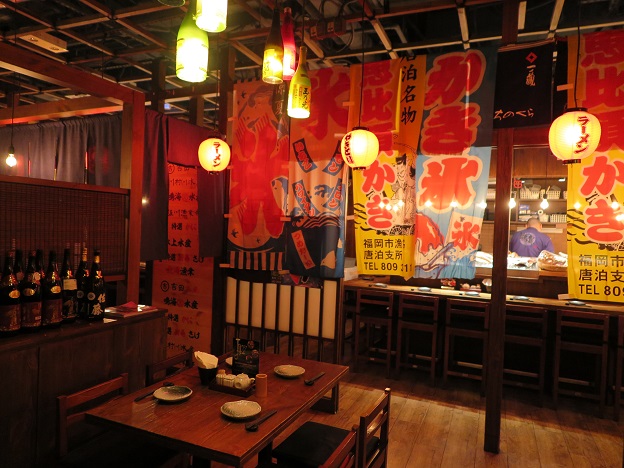 When you step into Umai, you feel as though you are in rural Japan, rather than industrial Lai Chi Kok. Classic Japanese “village’ style with street vendors like interior separate into different sections serving Sushi & Shashimi, Robatayaki and a main kitchen delivers other specialty from the menu. 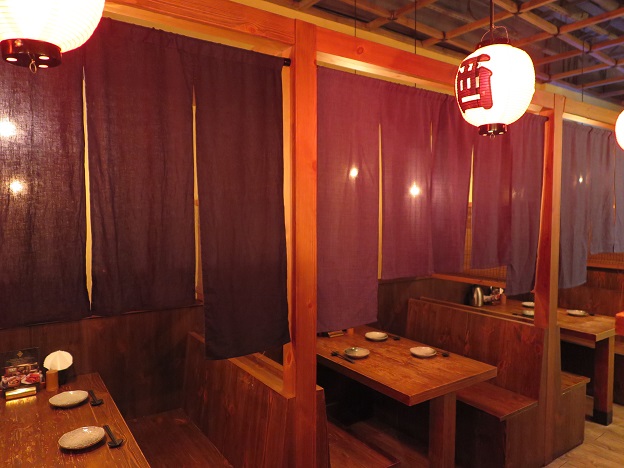 Our initial experience was delightful, soaking up the ambience and adjusting to such an environment where food is king. It was also reassuring to see Japanese diners really happy to sit and wait for the chef to serve them the night’s surprise dishes. 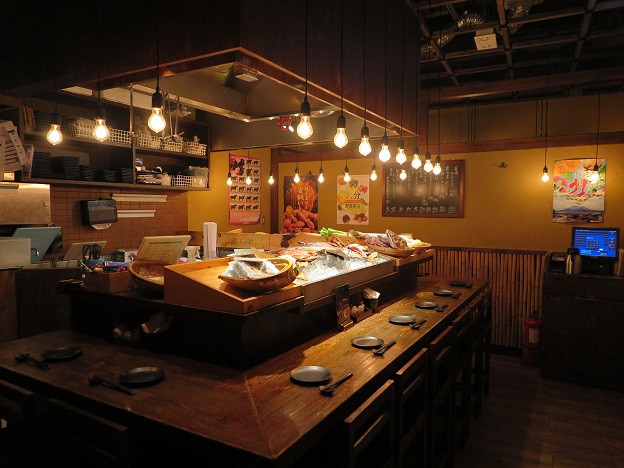 Umai will have all your favourites but for something different and unexpected, the Omakase is our recommendation. 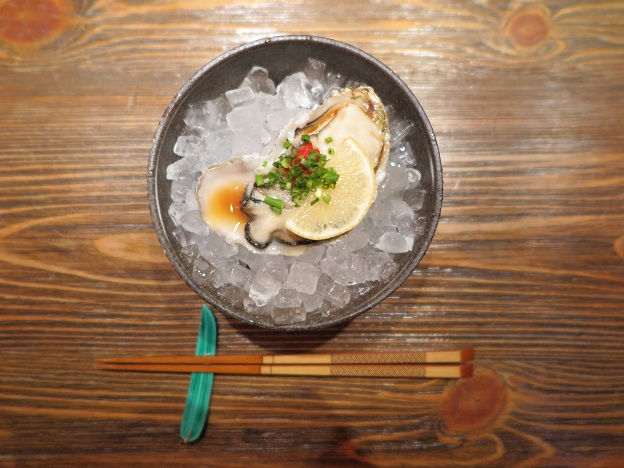 We started with some <Kaki Sashimi> & <Kyushuyu Kaki> Raw and steamed Ebisu Oysters which were large, plump, juicy and as briny as one could imagine the Japanese coastline is, but utterly delicious. 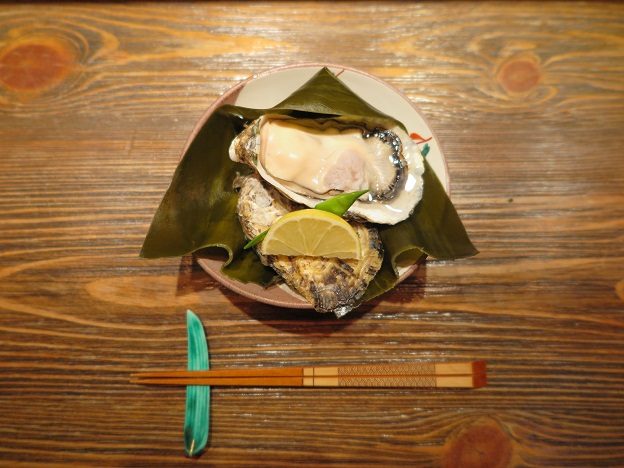 A assorted Shashimi platter to follow, Tako – the fresh octopus was a delight, the Shimaaji deep sea fish being thinly sliced to a perfect mouth full without much bite needed. The Kinmedai fish is rather a rare catch that leave you a hint of sweetness after taste as well as the palatable Saba as best accompanied by some good sake and in cold beer. 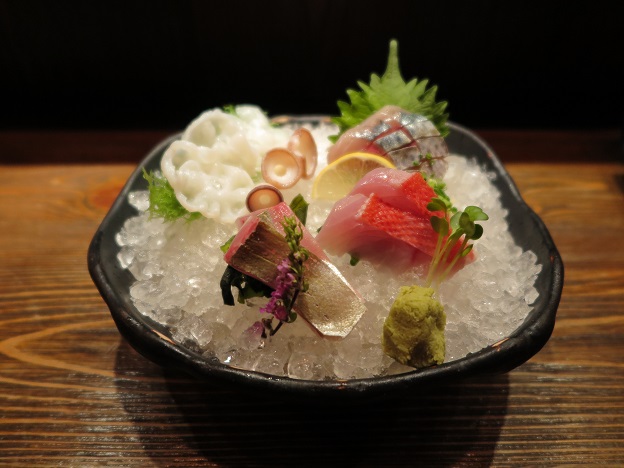 Lastly for this cold section, we had the <Seko Kani> a steamed whole spider crab with roe, the meat is incredibly fresh and sweet and the more you eat, the more you want it. It is easier to get at with the correct utensil than anticipated. 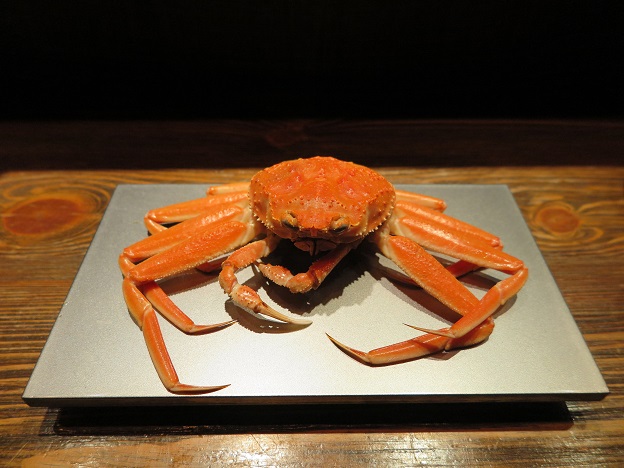 The next dish to come was a real challenge, even not most Japanese would enjoy but the <Shirago> white fish roe was lightly blanched and served with light soy sauce and other secret ingredients. This delicacy usually consumed fried or light grilled that took us to the edge of our hard wooden seats. The fish roe that looked like intestines with a slimy and soft and powdery texture when you bite, the silky palate creates quite a uncomfortable feeling if you are not used to it and you just want it to end immediately. As ever, when comes to food, especially in Japanese gastronomy, you don’t try, you won’t know even thought this is not exactly our thing, but you only live once and in an Omakase, it is inevitable you will try something new and unusual, which this dish certainly was. 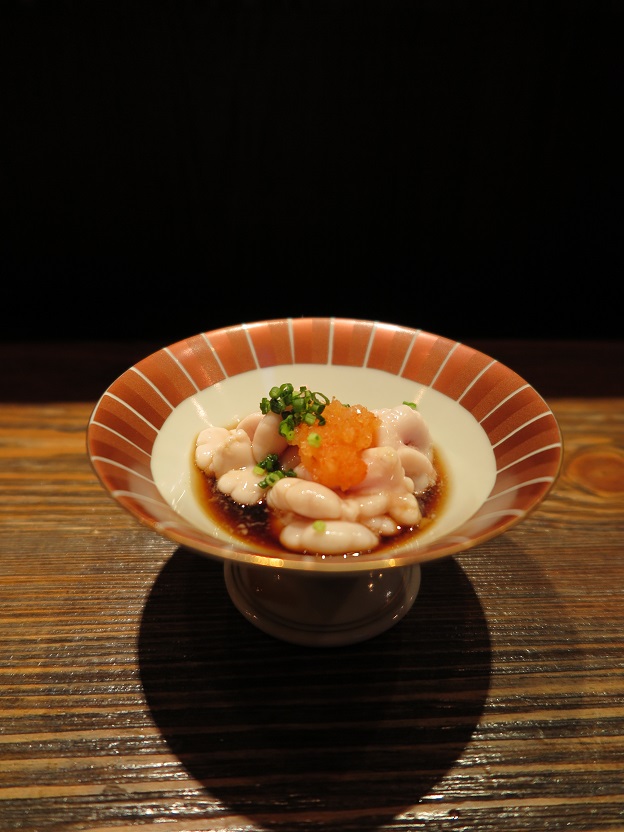 Let’s hop on to something warm and inviting, the <Gyutan>, barbecued beef tongue with chili and yuzu sauce and <Beco> smoked pork from the Robatiyaki took us back to familiar territory and comfort zone. 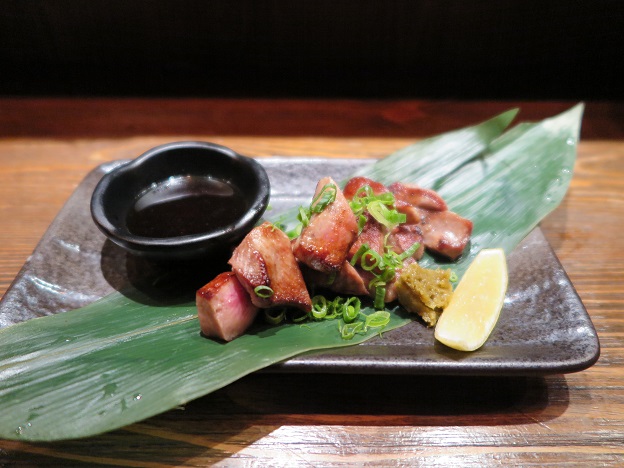 Both were cooked beautifully, with the tongue showing a little tenderness and the sauce was the perfect zinger on the palate to counter-balance the richness and texture of the tongue. The pork was thickly cut with layers of fat and oozing juices and was absolutely delectable. It had a chewy texture, but so more-ish. 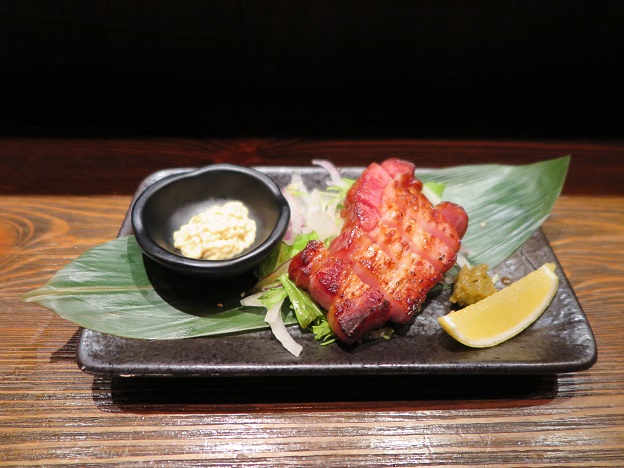 The <Boiled Kuromutsu in Black Sauce> is something what we anticipated, this stewed fish with carrot, radish and mushroom in a sweet sauce was a complete opposite in flavor to what we just had. It was evident the chef loves his fish, as this dish was extraordinary, with the fish flesh just falling apart with a gentle touch and the carrot and radish absorbed the sweet sauce by adding another level to the overall taste. It is divine and gohan (steamed rice) is a must to have and a complete enjoyment to enjoy this dish. The sauce was so delicious that we drank the remaining juices with a Kirin Ichiban Beer chaser. 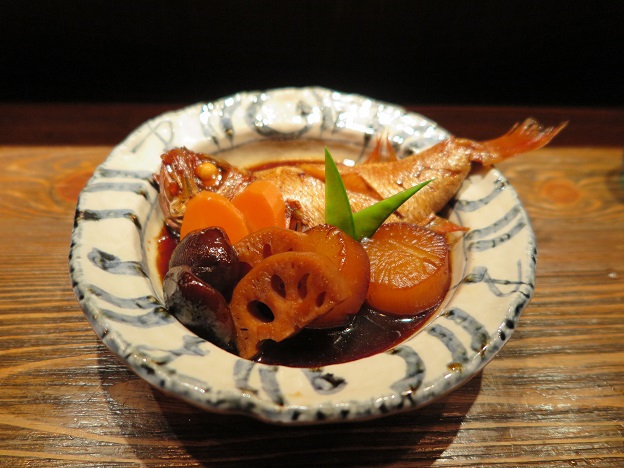 Fish dishes feature frequently in traditional Japanese cuisine due to its geographically location, we had <Nodoguro Kamameshi> steamed fish head rice, with the fish head imbuing the rice, the freshness aroma fills the air and great flavor that was self-evident the moment when you open the lid. 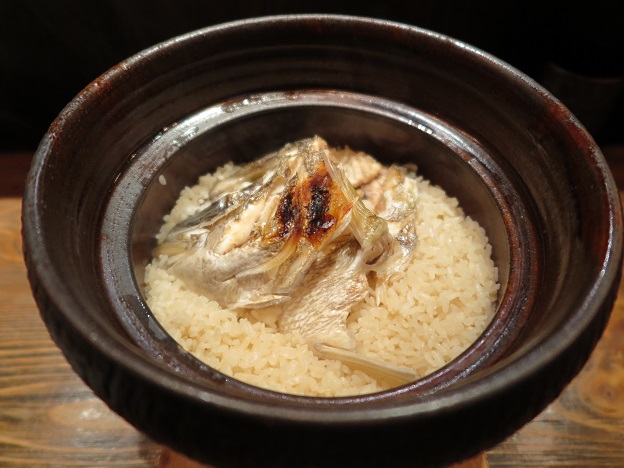 The rice absorb all the juices from the fish head was a sublime. A must request dish (only when they are available). 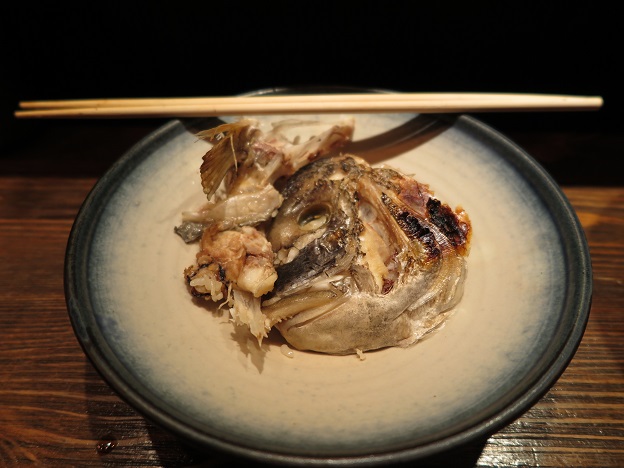 The <Clams with Sake> soup with light rice wine and seaweed was a little too flat in taste and the sequence of serving soup at the end of the dish seemed odd instead. It was a charming evening that took us worlds away from the usual hustle and bustle of the city of Hong Kong especially to experience such fine Japanese gastronomy. The food quality was second to none and way above our expectations despite the service was not as switched on as the food and the staff quite often could not give us the product knowledge we requested and they had to wait for the chef to explain the details. While the Manager was looking after handling our section, we expected more in depth information from the person front of house, rather than the chef. A bit more knowledge and passion in service from the front of house staff would go a long way. 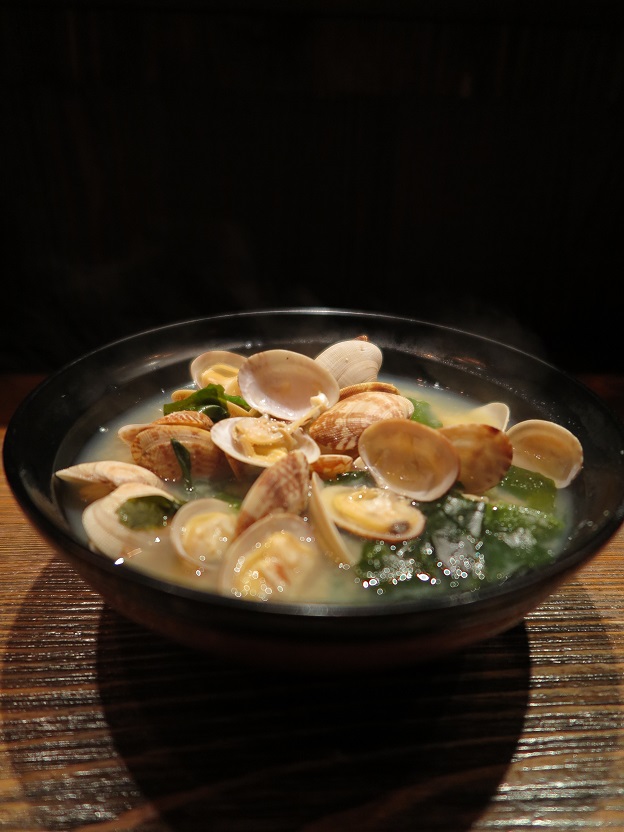 Email ThisBlogThis!Share to TwitterShare to FacebookShare to Pinterest
Labels: 《EATING OUT》, 《LIFESTYLE》, 《WINE AND DINE》