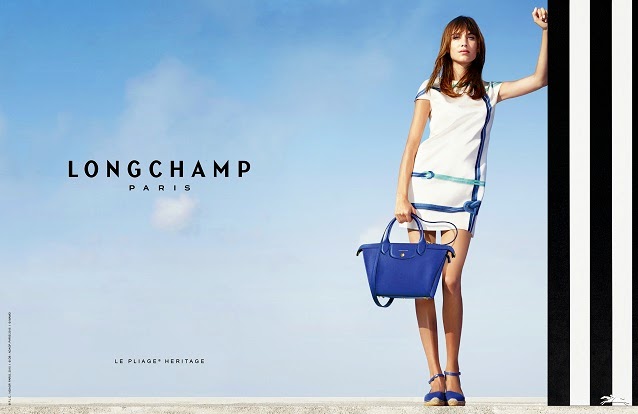 LONGCHAMP x ALEXA CHUNG @ Spring 2015 Le Pliage Heritage Ad Campaign was held at the MAMO, Centre d’art de la Cité Radieuse, in Marseille, France. It was the first time that designer Ora Ito had opened the doors of the roof terrace of his unprecedented new arts center for an event of this kind. Surrounded by works by major French artist Daniel Buren, the photos were taken in this exceptional outdoor venue. A setting all the more fitting for Longchamp as it corresponds to the graphic feel of this spring’s new collection. The other important element highlighted is color – a Longchamp hallmark reflecting the luxury house’s optimism. 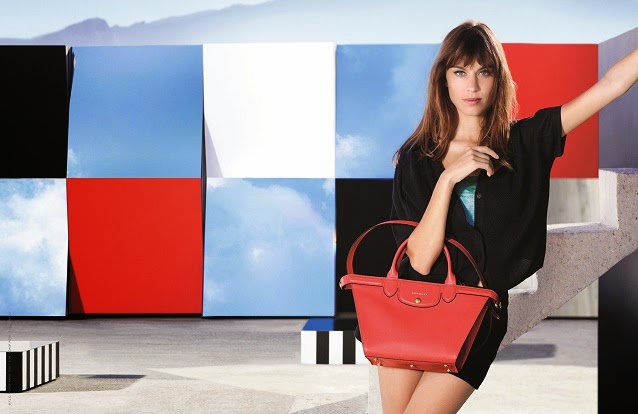 The concept is “creative movement”, which is part of Longchamp’s very DNA, as a brand that is constantly moving forward and continually evolving. This concept also embodies the Longchamp woman, who is dynamic, urban, and cosmopolitan, in step with her time. Longchamp is a global brand and this theme showcases the world of fine leather goods, as well as ready-to-wear and shoes. The photographer Max Vadukul was the man behind the camera. The elegant and luminous images he has created perfectly reflect the pure atmosphere of Longchamp’s new Spring 2015 collection. Alexa Chung is the face of Longchamp for the third consecutive season. The young English woman’s spontaneous and energetic personality made her a natural choice. “She’s a woman with a natural elegance and style, for whom fashion is a reality,” states Marie-Sabine Leclercq, Longchamp’s Head of International Communications. “She perfectly embodies the Longchamp woman with her eyes, which capture your attention and bring a lot of strength to the images.”

The spotlight is on the Le Pliage Héritage bag, Longchamp’s new “It bag” that combines a contemporary style with traditional craftsmanship in homage to the legendary “Le Pliage” bag. It reflects the house’s tradition of excellence. The campaign showcases a new mini-version in bold, dynamic colors. Its graphic silhouette and refined leather come in electric blue or bright coral: streamlined sophistication in concentrated form. Longchamp has once again called on the talents of director Jean-François Julian to shoot a new punchy and dynamic short film that presents Alexa Chung on the roof terrace in the sky. The soundtrack “Busy earnin” is by the London duo Jungle. This energetic film offers a colorful discovery of the space. It will be revealed on longchamp.com and Longchamp’s
social networks from February 9, 2015.

Posted by mylifestylenews at 9:00 AM