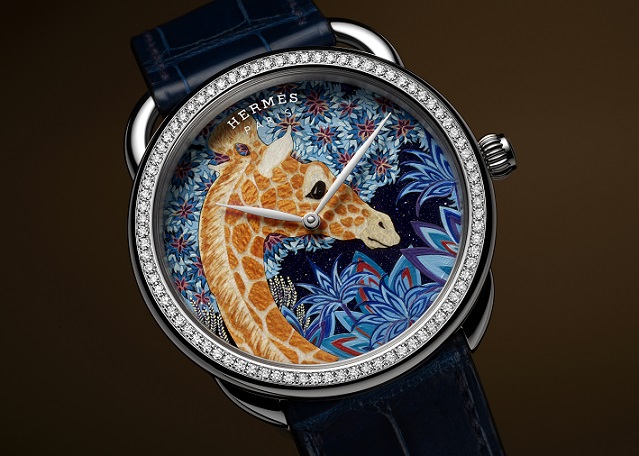 Created in 1978 by Henri d’Origny, the Arceau watch lends itself to the expression of Hermès skills. Produced in a numbered limited edition of 24, the white gold and diamond Arceau The Three Graces reinterprets the theme of the eponymous silk scarf designed by British artist Alice Shirley in 2020. Crafted in wood marquetry and miniature painting on aventurine, the elegant giraffe adorning the dial of Arceau The Three Graces was originally inspired by a trip to South Africa, when Alice Shirley had the privilege of spotting three giraffes partially concealed by an acacia tree. The delicacy and poetry of this gigantic creature, with its ample and graceful movements, is highlighted by the skilled touch of Hermès artisans, who have reproduced its natural harmony. To transpose the animal’s profile, long neck and mottled coat to the scale of a dial, the marquetry specialist begins by transferring and downscaling the design, then rigorously selecting the type, grain and colour of the wood used to reproduce it. In this case that meant a combination of naturally dark, light, stained or bleached wood – American walnut and maple, European sycamore and tulip tree – chosen for their nuances and textures similar to those of the original design. The artisan cuts out the multitude of tiny elements – 195 pieces in all – forming the portrait that is then assembled like a puzzle, before gluing, sanding and applying a protective varnish. This marquetry decoration comes to life in the heart of a work that also requires meticulous care and a flair for colours. On a scintillating aventurine base, the painter traces the outlines of the motif before placing the piece in the kiln to fix the colours in place. He then forms the various volumes of the background vegetation using successive layers of micro-painting applied with a brush and heat-dried in a kiln. He proceeds in the same way for the flat areas of colours, before finalizing his composition with small precise touches. The challenge of such an endeavour lies in miniaturising a rich palette of nuances, contrasts and subtle details. Several weeks of rigorous discipline, patience and dexterity are required to produce this dial, which is by nature unique. Representing a combination of artistic crafts and watchmaking, the Arceau The Three Graces watch is powered by the Hermès H1912 mechanical self-winding movement driving hours and minutes hands. The deep hues of the dial, framed by a precious white gold case set with 82 diamonds, are highlighted by a blue sapphire alligator strap made in the Hermès Horloger workshops.
Posted by mylifestylenews at 12:00 AM