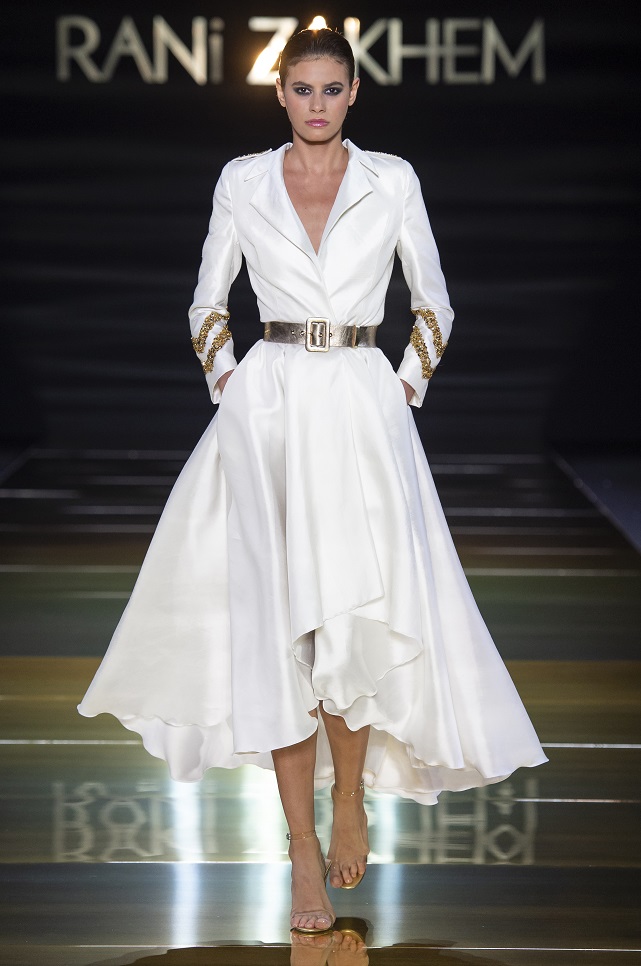 Rani Zakhem AW2018/19 Couture Collection is a vibrant and sparkling tribute to the combating and combative woman, Amazone of all jungles and terribly "Glamazonian", fatally seductive when, like a warrior goddess, she appears in her crystal armor. 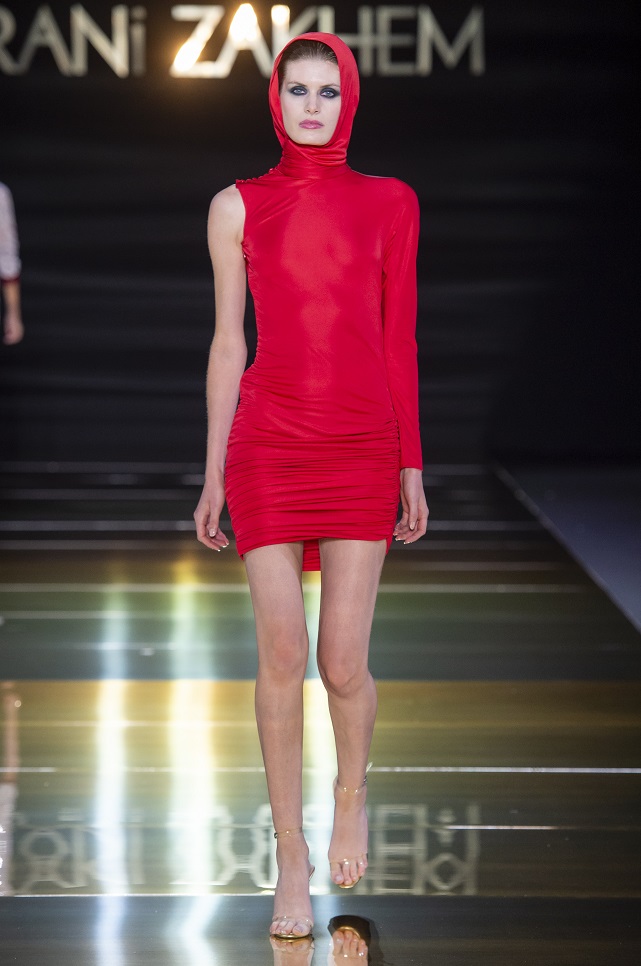 All elements of nature are invoked to protect this dangerous chameleon emerging from the foliage or surrounded by all the animals of Creation. Militia woman, super woman, general of the armies, admiral, archer of Amazonia, queen and sovereign, the power appertains to her and lives in her evidently, with elegance. 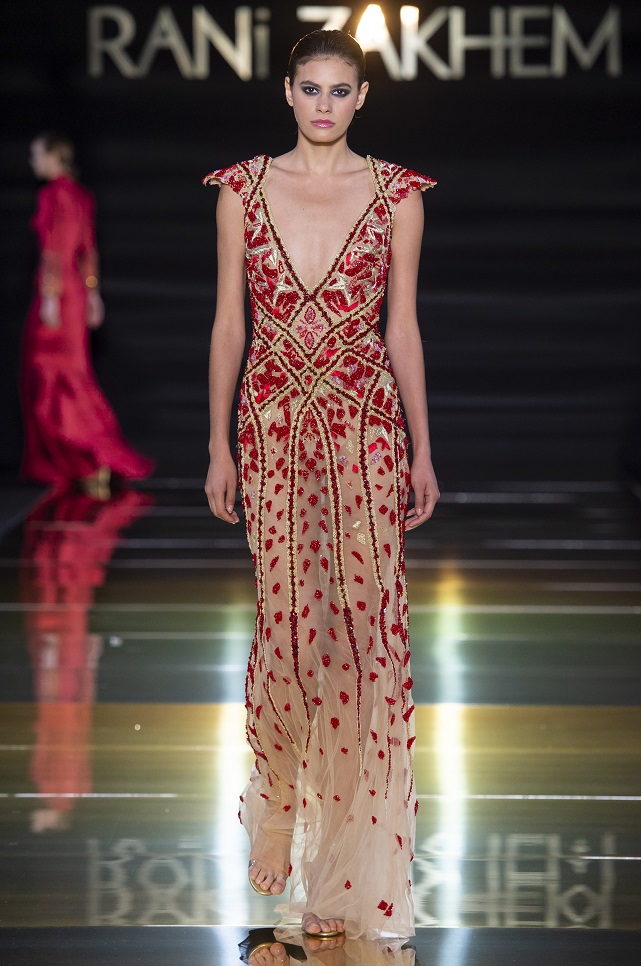 The camouflage spirit dominates the graphic scene of this Couture collection. This never-ending motif on military combat clothing, depending on whether they are fighting in urban areas, in deserts, forests or snowy planes, tells the tale of human fragility and highlights the need to blend into the environment to escape the enemy. 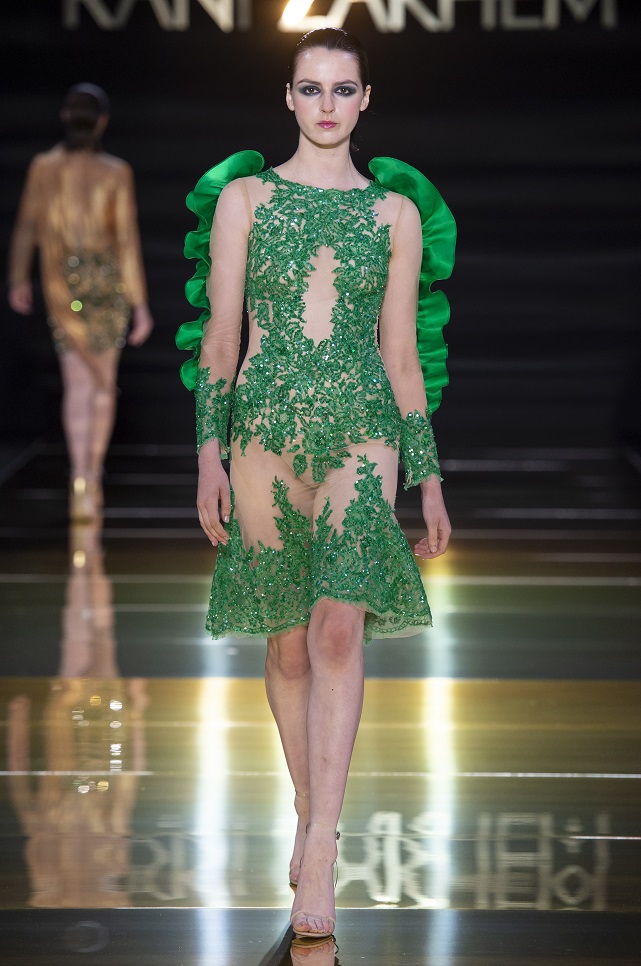 Rani Zakhem redesigns it and transforms it into a manifesto, as an embossed sumptuous ornament embroidered in new tonalities: glittering emerald, bronze and gold on a pencil skirt; red, black and gold crystals in clusters on an incendiary sheath or on the sleeves of a black spencer jacket; or in a single element, gold, iridescent crystal and silver, wrapping the waist of a white silk crepe cocktail dress vertiginously slit on the bias. 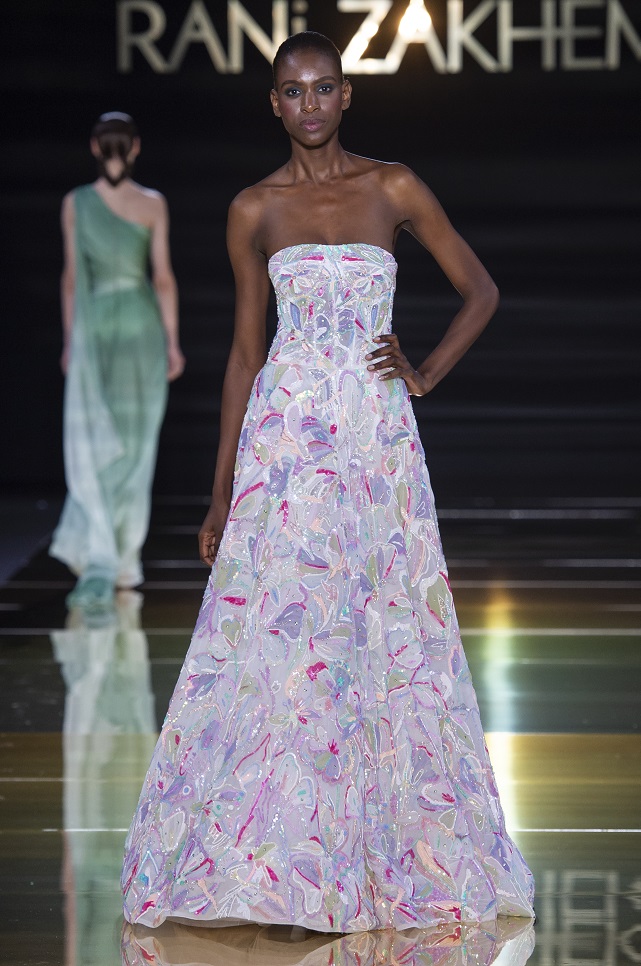 Elsewhere, we find the motif in an almost crude state, treated in a falsely literal way, as a serigraph in shades of khaki on a precious silk crepe sablé, for a tailleur composed of an ultra-feminine “V” neck spencer with structured shoulders, and sharp cigarette pants. 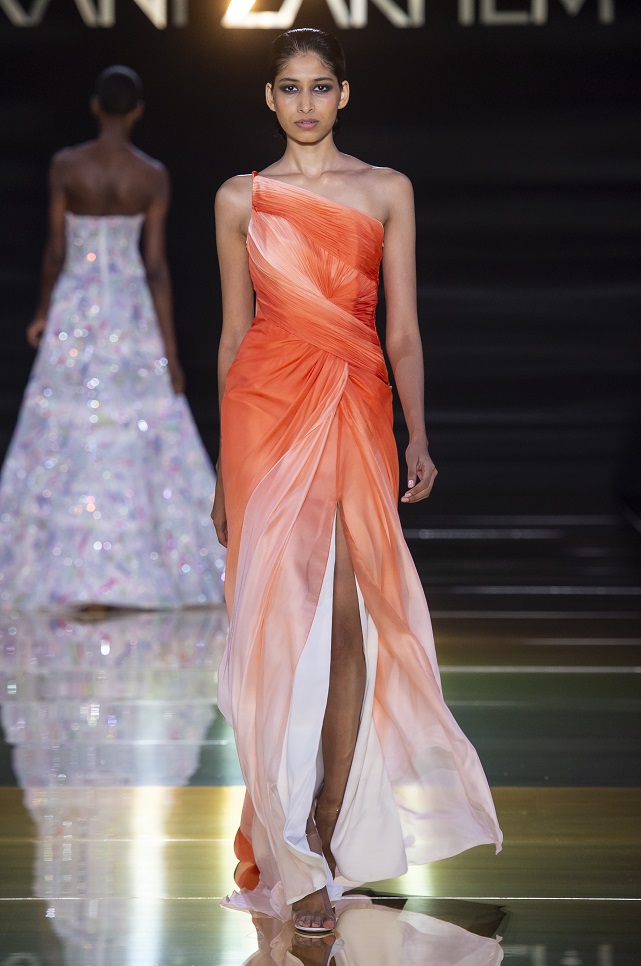 The very idea of invisibility inherent to camouflage is here reinterpreted into hyper visibility. Another recurring motif is the oversized military insignia, which adorn the sleeves of a jacket or coat as giant gold glittering embroidered chevrons. 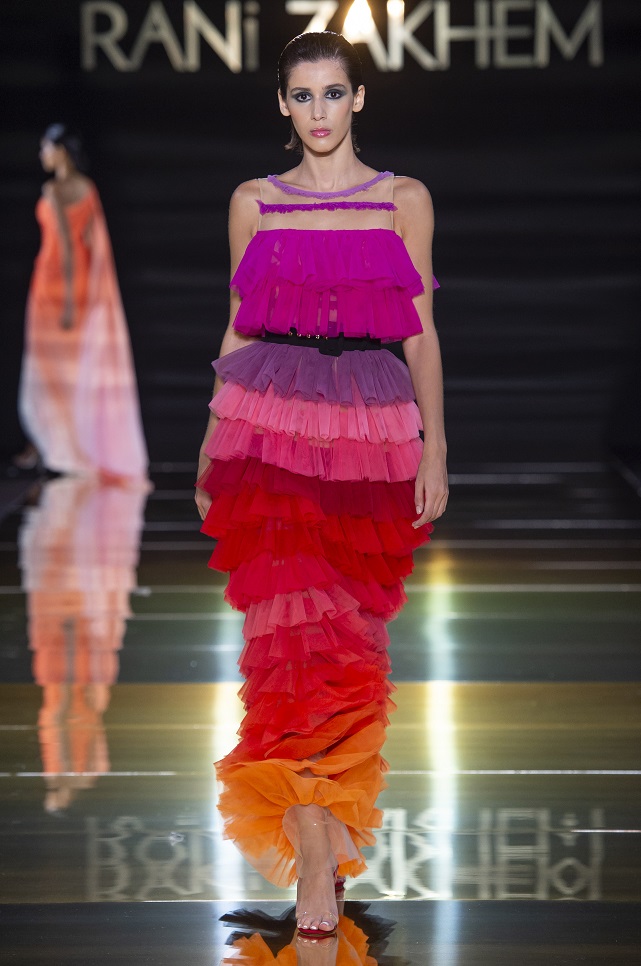 A large chunk of this collection, an explosion of white, a value rather than a color, considered fragile but luminous, bold, a symbol of renewal and resilience. The new Amazone stands out from the crowd and appears, strong and sensual, exposed but invulnerable, ready for all fights. 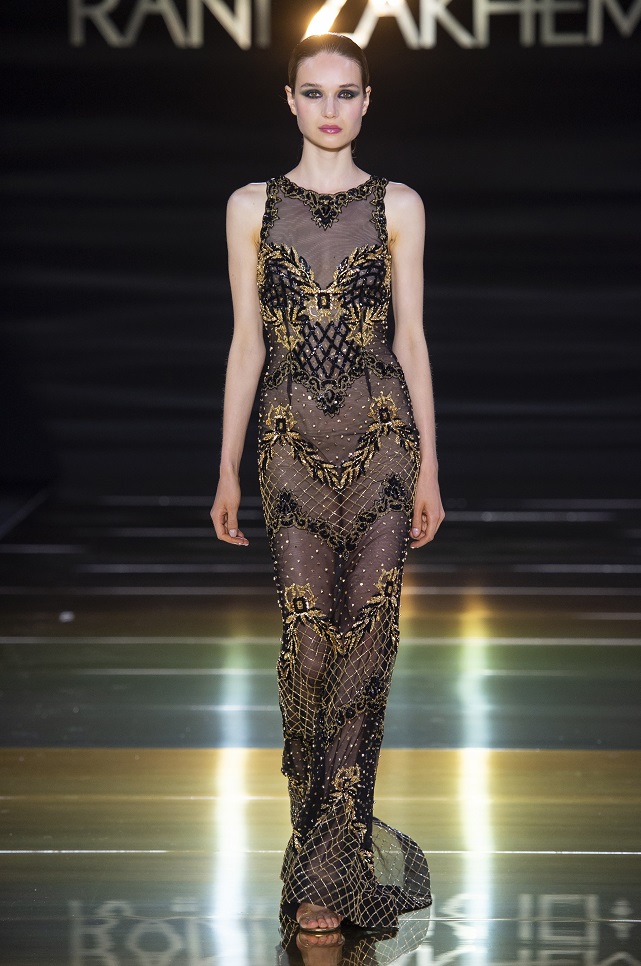 Rani Zakhem’s "glamazone" is also the delicate guardian of a paradise that she will not let falter. Like a nymph, it is marked with the seal of the forests translated, here in diaphanous sheaths where intertwined cascades of lianas drawn by the designer and hand embroidered with sequins and white, bronze, silver and gold braided threads. 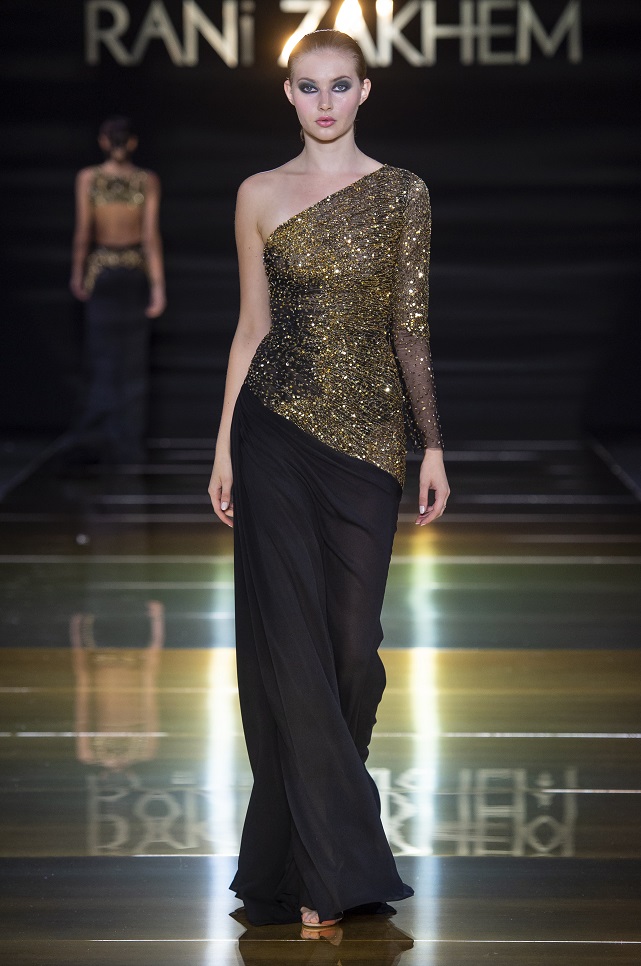 On the skirt of a tulle dress with crinoline all the poetry of an imaginary jungle unfolds, a fairy where fauna and flora blend in a palette of sky blue, pale pink, gold and copper, punctuated here and there by a flight of black birds. The strapless corset draped in nude tulle, joins the skirt by a movement of ruffled tulle. 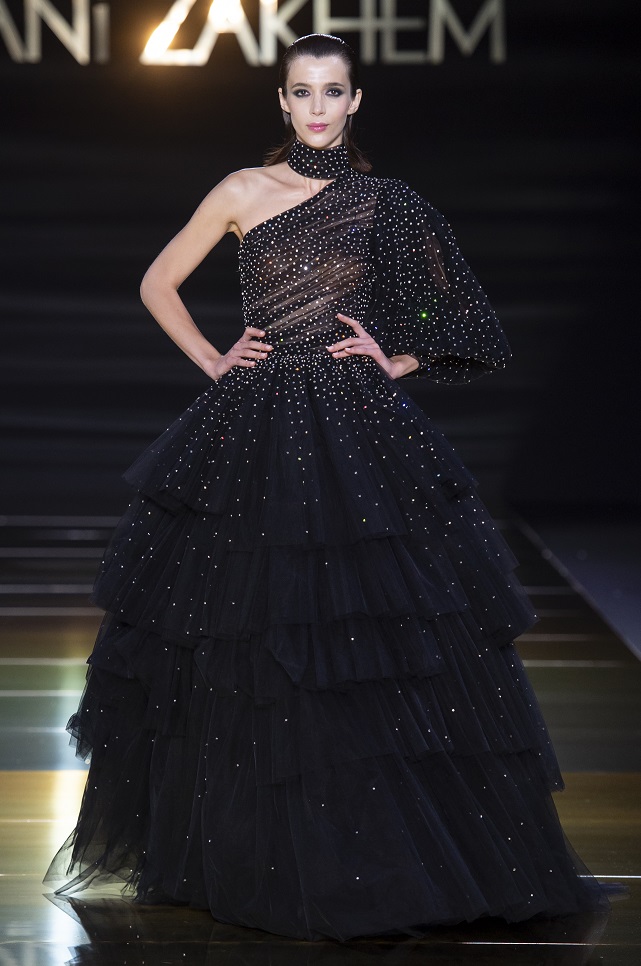 In this celebration of nature there is also a spectacular crinoline creation, fluttering black tulle, with scattering of crystals, evoking a spider in its precious cobweb. Dragonflies flutter over pastel hues of aquatic vegetation on an exquisite revealing ballgown as well as an adorable sheath in tulle cascades, nuanced from orange to pink, like a poisonous flower or panoply of native warriors. 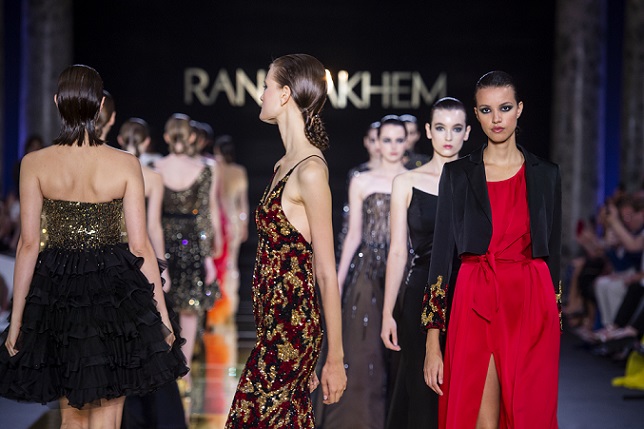 Subtle references from Yves Saint Laurent, Marc Bohan and Azzedine Alaïa punctuate the couture vocabulary of Rani Zakhem, between a Saharienne detail, a draped moulage, the powerful minimalism of a white dress enhanced by a slight ornament, all brilliantly inserted in a personal interpretation! 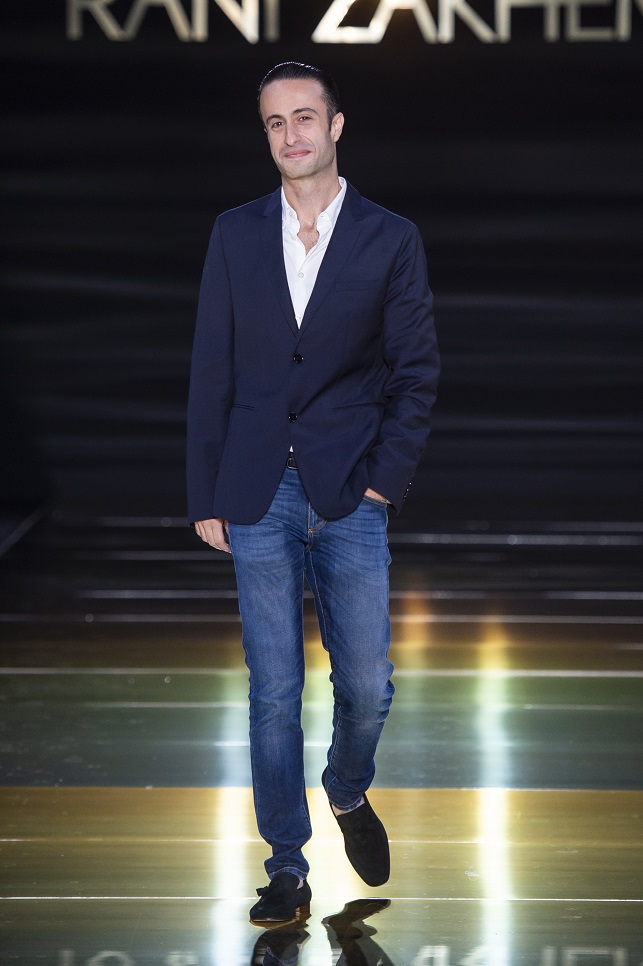 A warrior goddess in her crystal armor!
It's not a show, it's a parade!
Posted by mylifestylenews at 12:00 AM