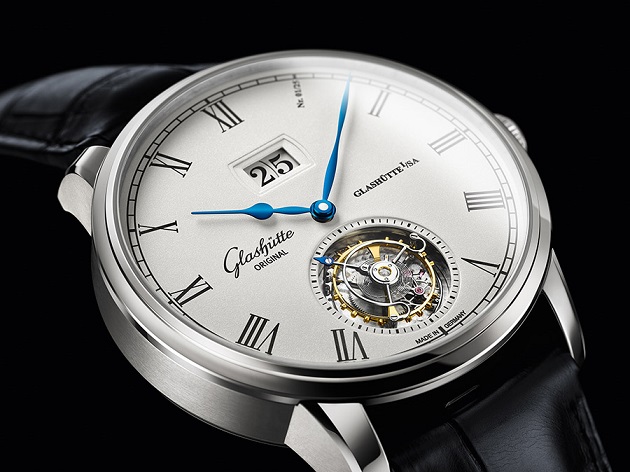 The Senator Tourbillon – Edition Alfred Helwig appears to contradict the law of gravity in two ways at once: The untiring rotation of its Flying Tourbillon resists the pull of gravity, and the filigreed mounting reinforces the impression of pure weightlessness. With its new, light dial and individual numbering, the edition, limited to 25 pieces, offers moving insights into the lightness of being. Timelessly beautiful: The new face of the Senator Tourbillon The new version of the Senator Tourbillon is presented in a 42 mm white gold case framing a light, silver-grained dial whose finely textured surface sets off the black laser engraved indexes and railroad chapter ring clearly. This exclusive timepiece confirms its uniqueness in a manner as discreet as it is elegant: The Roman “index” at 1 o'clock reveals the individual numbering of the limited edition. A black Louisiana alligator leather strap with white gold foldover clasp assures a secure and stylish presence on the wrist. Ticking within the watch is the manufactory Calibre 94-03 movement with 48-hour power reserve. Additional classic features of the Saxon art of watchmaking can be seen through the sapphire crystal case back, including the Glashütte stripe finish, blued screws and the two tone galvanized skeletonized rotor.

The new model carries the name of the inventor of the Flying Tourbillon, the master watchmaker Alfred Helwig. Born in the region of Niederlausitz, Alfred Helwig graduated with honours in 1905, having completed his training at the German Watchmaking School Glashütte, where he remained a loyal teacher for more than forty years. Given his work and writings, he is considered one of the most important figures in the history of Glashütte watchmaking – and yet it is his invention of the Flying Tourbillon from 1920 that has secured him his place in the international annals of haute horlogerie. Today his name graces the Glashütte Original watchmaking school, located in the same building where he once worked and taught, educating the future of the Glashütte art of watchmaking.

Two classics from Glashütte: Panorama Date and Flying Tourbillon The Senator Tourbillon Edition Alfred Helwig presents not one, but two classic Glashütte complications. The Panorama Date, positioned below 12 o'clock, celebrates its 20th anniversary this year. Since 1997 Glashütte Original has used two date discs arranged concentrically on the same level to ensure that one can read the date easily without a central separation bar. In the Senator Tourbillon one encounters a further child whose origins lie in Glashütte: The Flying Tourbillon was developed almost 100 years ago by Alfred Helwig. Following the reorientation of the Saxon watchmaker, in 1995 it was chosen for good reason as the first complication to take up the traditions of its home town. 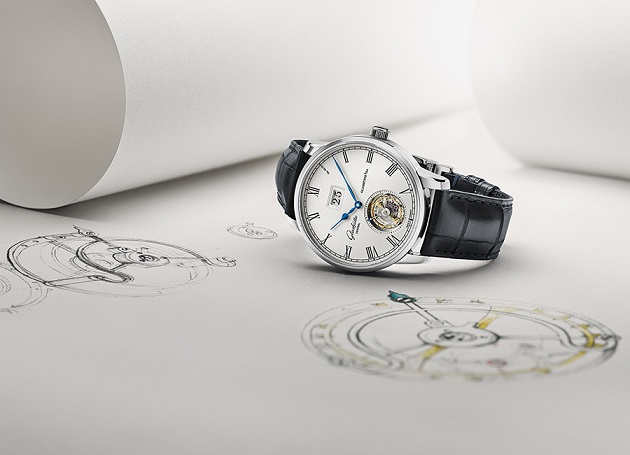 The tourbillon (French for whirlwind) is one of the most sought-after of horological complications. The tiny carriage was originally developed by Abraham Louis Breguet in 1801 to compensate for the effects of gravity on the rate precision of mechanical pocket watches. The ingenious construction compensates for the centre of gravity fault resulting from the vertical position of the watch by causing the entire oscillation and escapement system to turn on its axis once a minute. The effect of this movement is to ensure that the carriage, with its balance, pallet fork and escape wheel, offsets an imbalance resulting due to its influence on only one side in a negative impact on the rate precision of the watch. In the era of pocket watches the tourbillon was thus a revolutionary invention and a guarantee of precision. Even today its construction is considered exemplary of the highest levels of the art of watchmaking.

The Flying Tourbillion lends this principle even greater elegance, offering fascinating insights at the same time. The advanced version built by Alfred Helwig in 1920 differs from the classic tourbillion primarily in terms of aesthetics: anchored on one side only, it has no need for the top bridge, thus offering the viewer an unobstructed view of the beauty of this highly sophisticated complication. Secured exclusively below the tourbillon base, it is this apparently weightless construction that makes it, from a watchmaker’s point of view, particularly challenging and labourintensive. In this case the tourbillon is powered from the third wheel to the fourth, which is mounted below the tourbillon and secured in the tourbillon assembly.

The escape wheel pinion protrudes from below the tourbillon and engages with the fourth wheel, secured firmly to the base plate. The rotation of the tourbillon results in the escape wheel pinion engaging the fourth wheel, which allows the escape wheel to trigger, via the pallet fork, the oscillations of the balance wheel. Thus the movement of the balance and cage can be admired without interference from a top bridge. The lightness of the construction is certainly meant to be taken literally: The “flying” tourbillon from Glashütte Original weighs only 0.2 grams. It is comprised of 72 finely finished components, which are painstakingly decorated and assembled by hand.