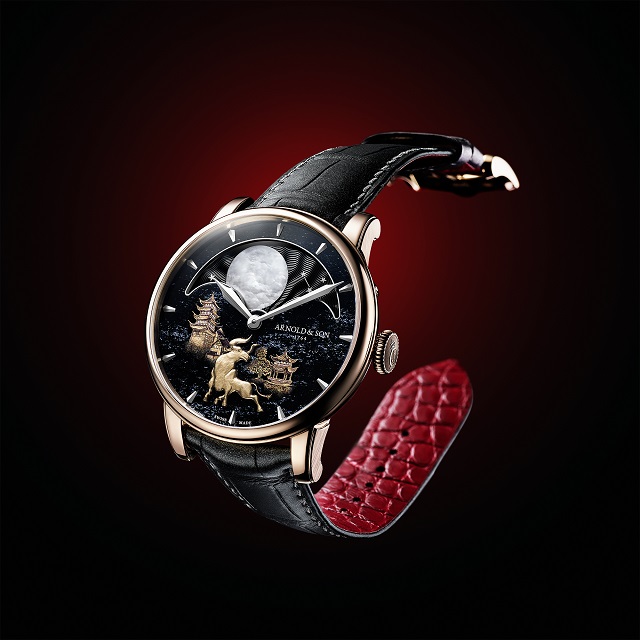 In honour of the traditional Chinese zodiacal calendar’s new year, Arnold & Son has produced an eight-piece limited series of its high-precision moon-phases model decorated with a buffalo. The year of the Metal Buffalo begins on 12 February 2021 and symbolises appeasement, dialogue and soil fertility. It is thus a powerful and docile animal that is represented on the dial of the Perpetual Moon “Year of the Ox”. The year of the Metal Buffalo has been the inspiration behind a scintillating production of the Perpetual Moon. Arnold & Son dreamed up a powerful animal, an immense moon, refined production drawing on the Manufacture’s know how, and the variety of motifs offered by the mineral kingdom. Yellow gold and specular haematite dominate by day, and at night the scene lights up. 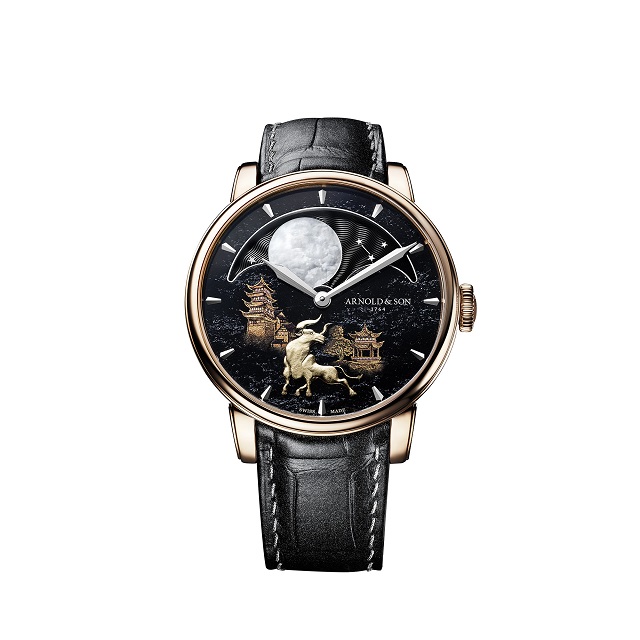 IMMENSITY
Arnold & Son have installed their large moon in the night-sky that forms the dial of this exceptional time-piece. In a large aperture, a disc turns to show us the age of the heavenly body, the appearance of its crescent and its light. This moon is crafted in mother-of-pearl, its shadows are hand-painted and it is coated with Super-LumiNova. In the daylight, it is almost white. In the dark, it lights up from within and takes on a new aspect, with details emerging. Further along on this disc, the constellation has been created using the same methods.

RARITY
Arnold & Son continue to make the most of the infinitely varying textures nature has to offer. After obsidian and aventurine quartz, it is specular haematite that has been selected for making the dial of this Perpetual Moon. This variety of haematite is in laminated form, with layers that are naturally smooth and shiny. As with all haematites, due to its iron composition there are silvery flakes in its totally black mass. These glittering specks have also been incorporated into the doublefaced alligator-skin strap, the outer face of which is black, flake-speckled and embellished with stitching in veritable platinum (Pt950) thread. 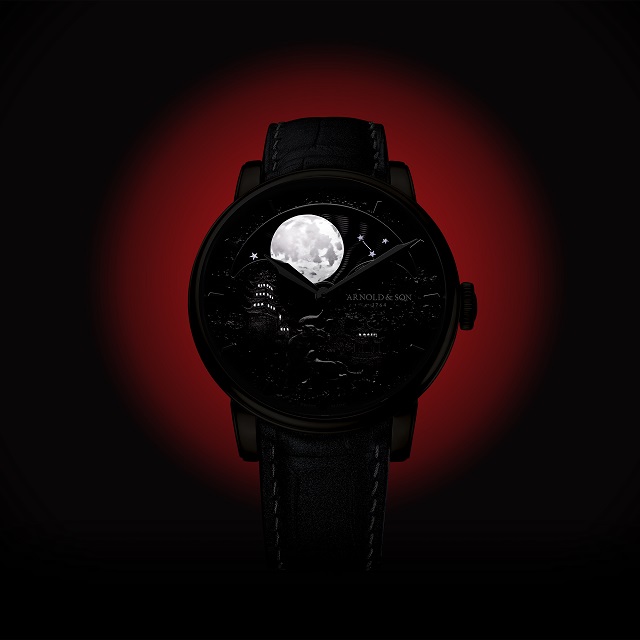 HORNS
But the unique and exclusive signature of this limited series is the buffalo with immense horns standing, imposingly, at 6 o’clock. It is a miniature gold sculpture featuring the animal in a majestic posture. In the background is a scenery of multi-storey pagodas, hand-painted with gold powder. Their windows have also been painted with Super LumiNova. Thus at night-time, these temples are lit up from the interior and the Perpetual Moon takes on an inhabited aspect.

ACCURACY
Like all the movements used by Arnold & Son, the calibre A&S1512 was entirely developed, produced, assembled, decorated, adjusted and cased up in the brand’s Manufacture in La Chaux-de-Fonds. This calibre is based on a large barrel with an oscillation frequency of 3 Hz, giving a 90-hour power reserve. Last but not least, the moon-phase display of this movement will remain accurate for 122 years before deviating by one day from the actual appearance of the moon in the night-sky.
Posted by mylifestylenews at 12:00 AM