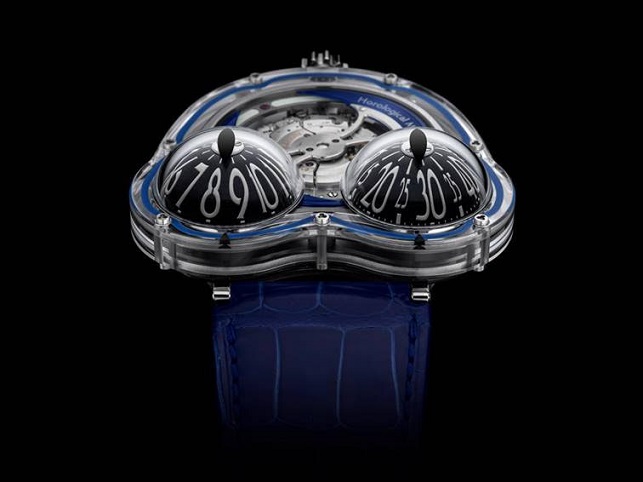 In 2009, MB&F was four years into its creative expression of mechanical art. Horological Machines N°1 and N°2 had established the guiding principles of the Maximilian Büsser & Friends collective: audacious design, transformative micromechanics, untrammelled imagination. Then came Horological Machine N°3; HM3 had everything that HM1 and HM2 had before - the design, the micromechanics, the imagination - but its defiant three-dimensional construction shot MB&F into hyperspace. One year later, in 2010, the vehicle that transported MB&F into a new universe proved its versatility and cemented its place in the hearts of MB&F lovers everywhere, by morphing into the Tribe’s first (and best-loved) mascot: the HM3 “Frog”. Two globular “eyes” that rotated to give the hours and minutes. A widely grinning “mouth” revealing the occasional bright flicker of the signature MB&F battle-axe rotor as it swept past a date scale. A glistening “skin” of titanium, red gold or exotic zirconium. HM3 Frog may have been small as a specimen of amphibious pondlife, but it was mighty on the wrist as it leapt to iconic status at the crossroads of kinetic art and horology. 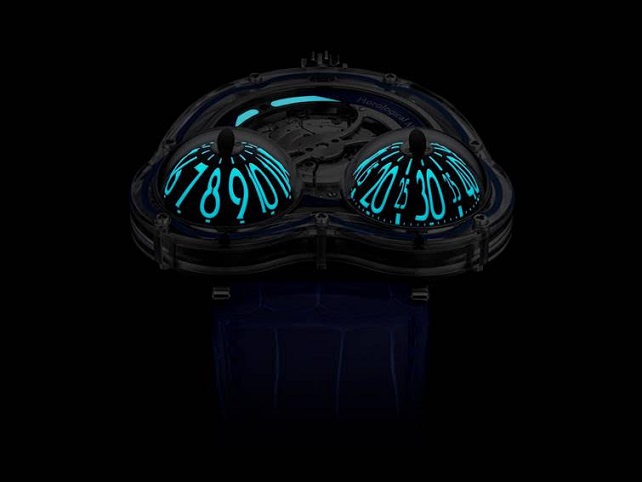 Now, 10 years after its debut, HM3 Frog makes its comeback, radiantly exposed in a sapphire crystal case, yet still with a hidden message to be discovered. Presenting Horological Machine N°3 “FrogX”. For the first time, the HM3 engine is showcased in all its glory, used here in its MegaWind iteration that trades the date display for an expanded rotor. Two paper- thin domes, milled out of aluminium to be as light as possible, indicate the hours and minutes, rotating under markers designed to resemble the lateral pupils of a frog’s eyes. Super-LumiNova accents, like the vivid colours that nature endows upon its feistiest creatures, reveal themselves in fluorescing segments under the rotor and on the time-display domes. If the first HM3 Frog was an animal of land and lake, FrogX brings us into the arboreal realms of the transparentskinned glass frogs of Central American cloud forests. The transparent case of FrogX is entirely of sapphire crystal, one of the hardest known minerals, and must be milled with diamond-tipped tools or special high-tech carbide bits. 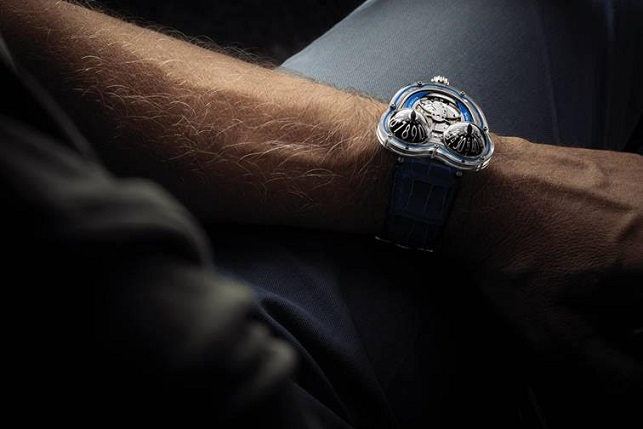 Despite MB&F’s experience with the most advanced sapphire-crystal producers (as demonstrated in earlier MB&F creations such as the HM4 Thunderbolt and HM6 Alien Nation), machining the case of HM3 FrogX still provides a considerable challenge. The separate sapphire domes not only need to be uniform in size, they must also be exactly uniform and consistent in thickness and curve so as not to create any final optical distortions in the reading of the time. Those looking at the winding and setting crown of HM3 FrogX, expecting to see the usual battle-axe insignia, will be slightly baffled to find a smooth, highly polished disc (although exceptionally observant individuals may notice a slight irregularity in its reflection of light). At just the right angle, with just the right kind of directional light and just the right receiving surface, the final secret of the fully exposed FrogX is revealed. A secret signal, created by sculpting the metal crown at microscopic levels to allow it to reflect light in highly specific ways, is the key to unlocking the MB&F battle-axe. 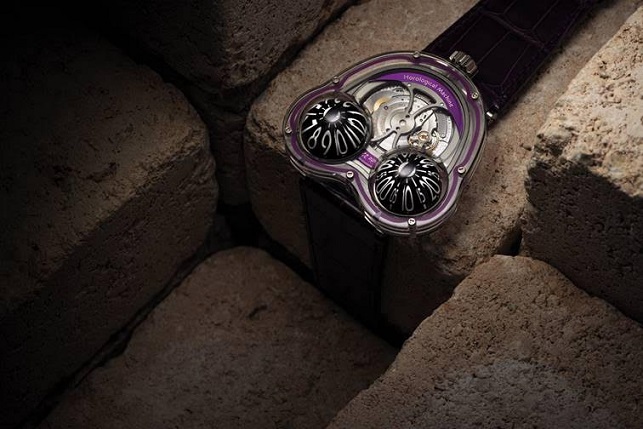 The HM3 FrogX 10th anniversary limited editions are available in three versions of 10 pieces each with blue, purple or turquoise rotors and matching colours of Super- LumiNova and case gaskets. To create the secret battle-axe signal, MB&F worked with light-sculpting techniques pioneered by Rayform, a Swiss company whose technology has various applications, from design to anti-counterfeiting measures. By micro-forming a metal surface at levels nearly imperceptible to the human eye, Rayform technology is able to direct incident light beams to be reflected in customised ways, creating a light-encoded message or design that can be viewed on any relatively uniform surface. Among the global Tribe of MB&F, certain elements constitute an insiders’ understanding of a shared passion, the battleaxe insignia being the first and foremost identifier of this exclusive community. With the secret message hidden via Rayform technology in the crown of HM3 FrogX, the code goes further undercover… even in a creation that exposes its innermost workings to the world. 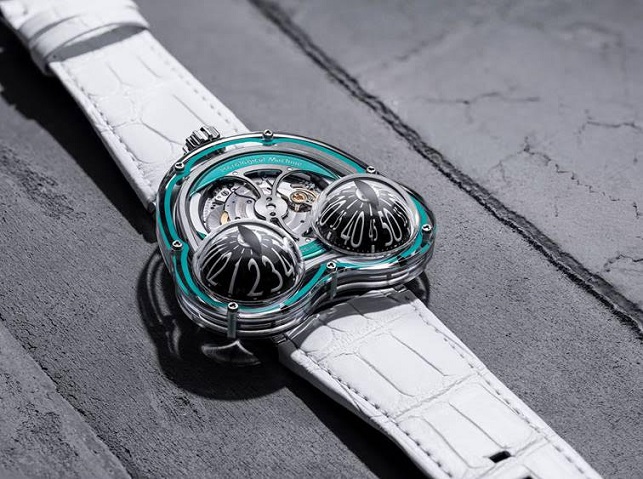 Corundum, commonly known in its gem-quality form as sapphire, is one of the hardest minerals known to man. It is surpassed in hardness only by a few other materials, notably diamond (crystalline carbon), which rates a 10 on Moh’s scale of hardness, while corundum is rated at 9. This exceptional hardness means that sapphire watch crystals are virtually scratch-proof, providing unparalleled legibility and material integrity over the long term, not to mention imparting a level of prestige that is not associated with regular silicate glass or transparent polycarbonate - the two most common alternatives to sapphire watch crystals. Concurrently, this also means that sapphire is extremely challenging to machine in complex three-dimensional shapes, a challenge that is compounded by the small machining tolerances required in watchmaking. Since its very first creations, MB&F has worked with ever-increasingly complicated sapphire crystal components; the HM2 “Sapphire Vision” editions, the double-arched crystals of the HM4 Thunderbolt and the hallucinatory body of the HM6 Alien Nation being prime examples. 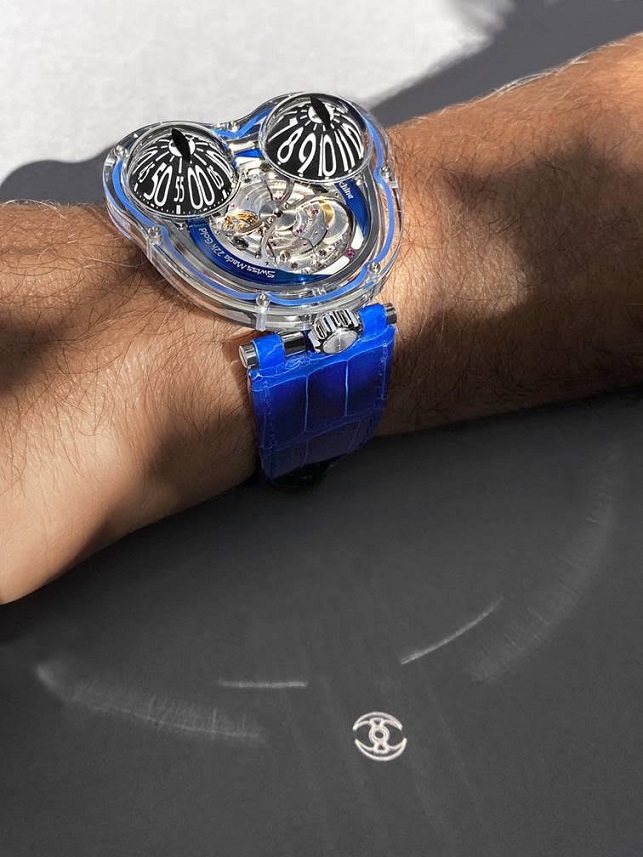 The very first MB&F HM3 Frog from 2010 already presented a significant advance in its time, with the twin domes in sapphire crystal over the indications of the hours and minutes. Not only did the curvature of the domed “eyes” of HM3 Frog have to be exactly right, the thickness of the crystal was strictly controlled throughout so as not to distort the time display. In FrogX, the two sapphire domes are fused to the upper case body, itself also in sapphire crystal, creating an additional level of difficulty. Something we take for granted in biology - the formation of perfectly shaped pairs of optical lenses - proves a daunting task to replicate by mechanical means. Machining and polishing each case of HM3 FrogX requires weeks of intensive and meticulous work, a number that would be multiplied greatly if not for MB&F’s 15 years of experience in boundary-pushing sapphire crystal design since 2005.
Posted by mylifestylenews at 12:00 AM