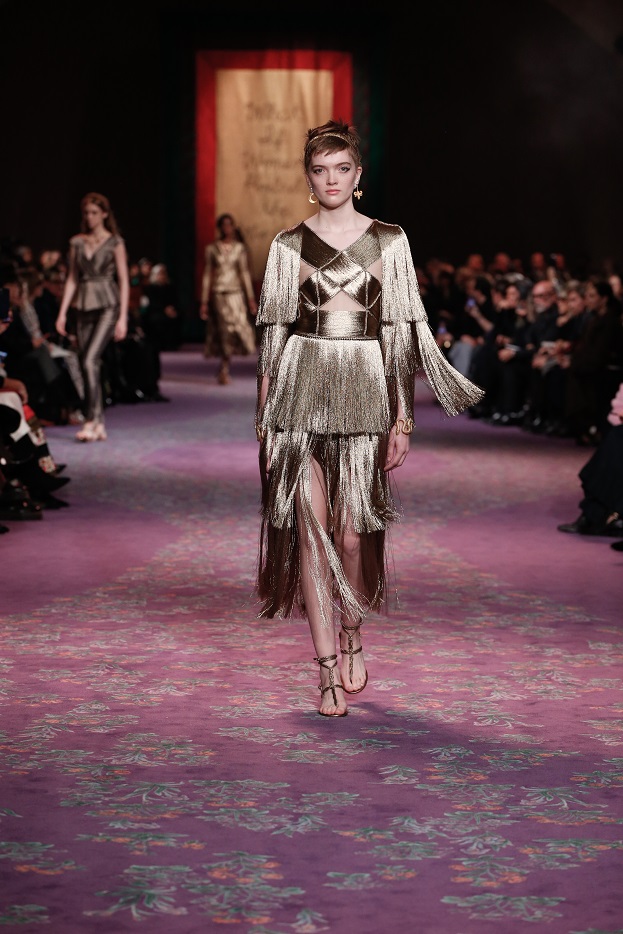 “What if Women Ruled the World?”. A committed question raised by the iconic American artist Judy Chicago became the driving inspiration for the creations in Dior SS2020 haute couture collection. 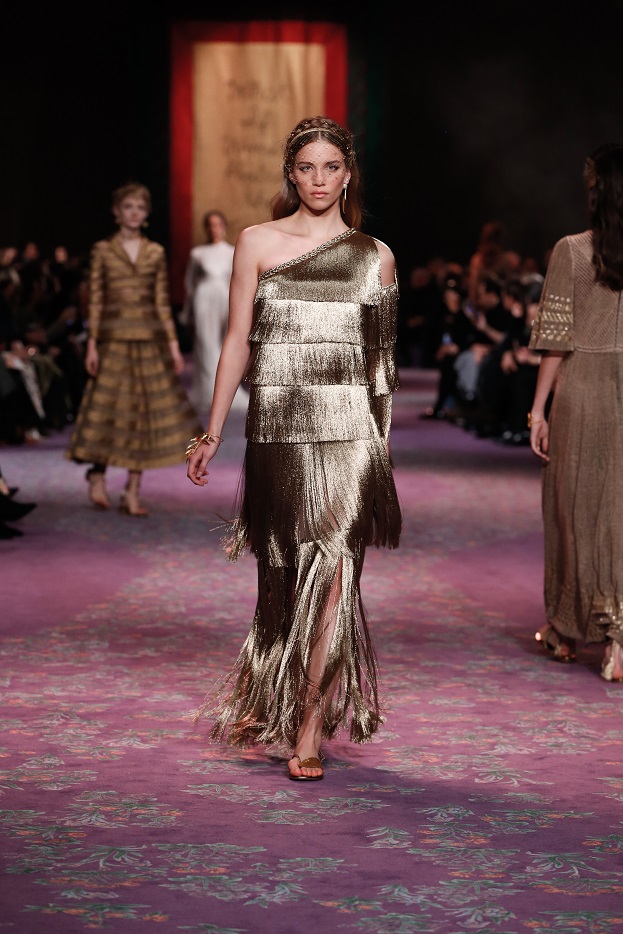 For Maria Grazia Chiuri, each collection offers an opportunity to study a specific subject and contributes to the evolution of her singular approach. In opening herself up to other ways of thinking, the Creative Director seeks to grasp the complexity of relationships between feminism and femininity. 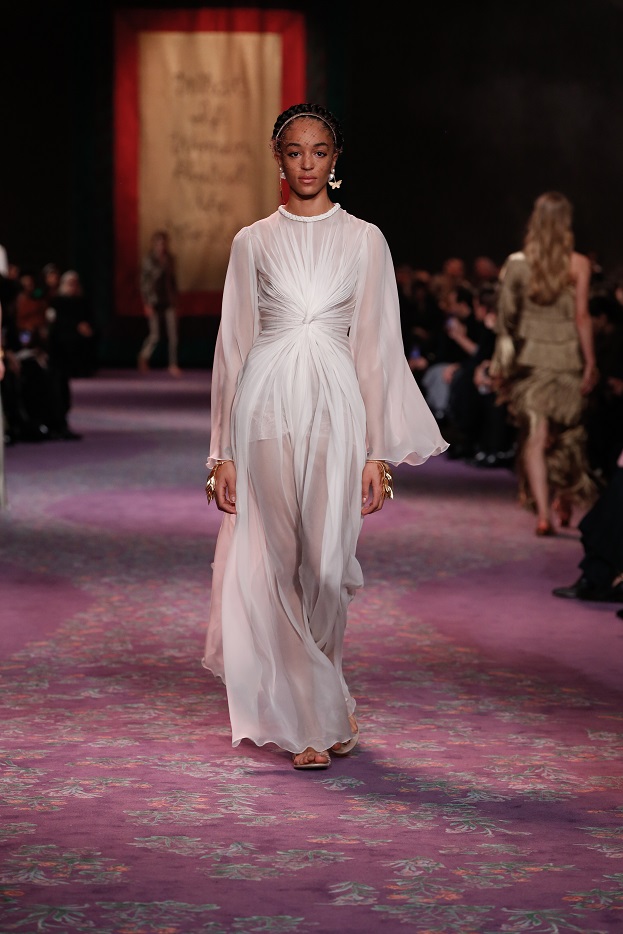 Mindful of the fundamental link between fashion and the body, she resculps it, like a manifesto. This committed approach has led to dialogues with writers, researchers and artists, with whom the Creative Director conceives the set and the spirit of her fashion shows. 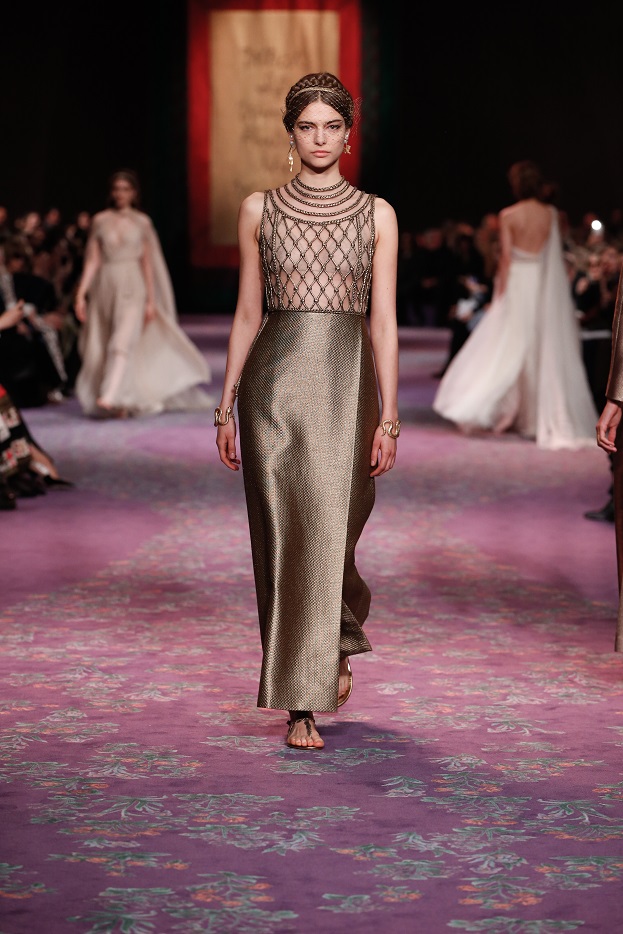 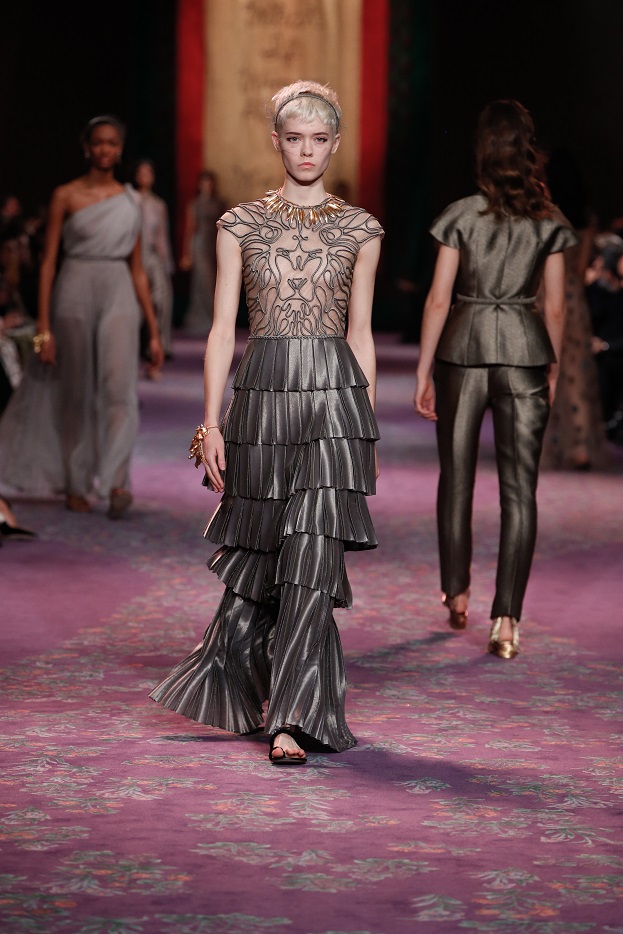 The Female Divine, an installation specially designed by Judy Chicago for the garden of the Musée Rodin, at once serves as a sanctuary, a stage and a monumental artwork. 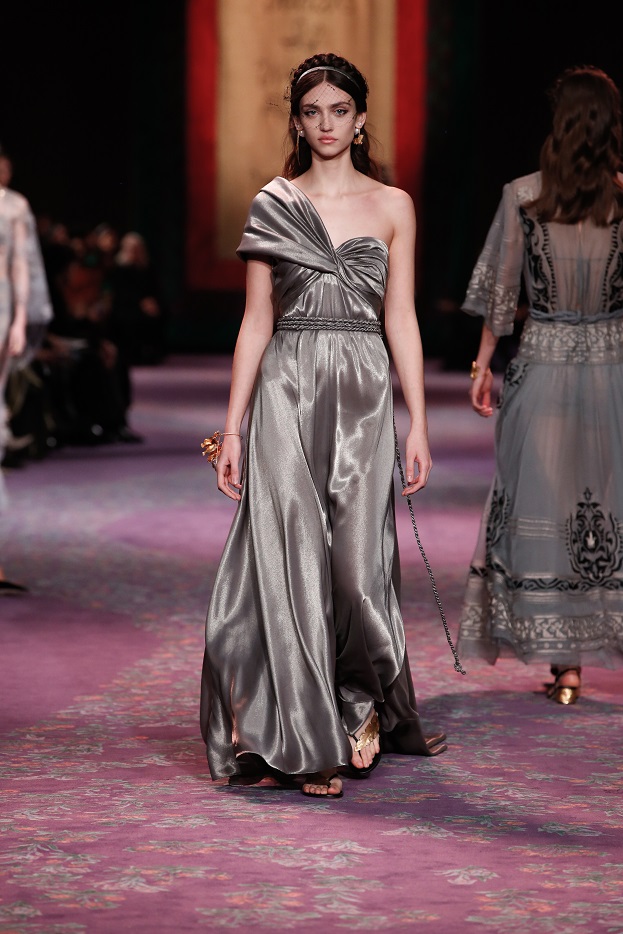 But above all it represents a tribute to, and reappropriation of, an ancestral power that goes beyond the idea of procreation. Maria Grazia Chiuri highlights the vision of a pioneer, a founder of American feminist art, as the revivor of a triumphant, divine conception of femininity, mistress of her destiny. 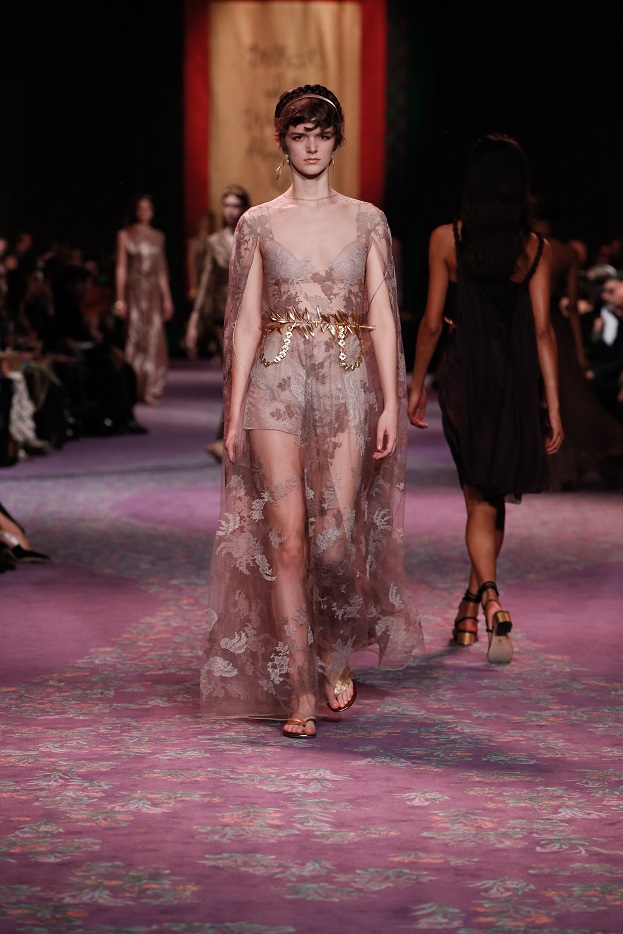 The peplos, a garment of timeless modernity, is reinterpreted as evening dresses. The drape, with its clean line, follows the curve of the body and gives structure to the silhouettes, such as fitted jackets with loose collars, and skirts and pants that are transformed into tuxedos in more masculine materials - like houndstooth and herringbone – woven with gold. 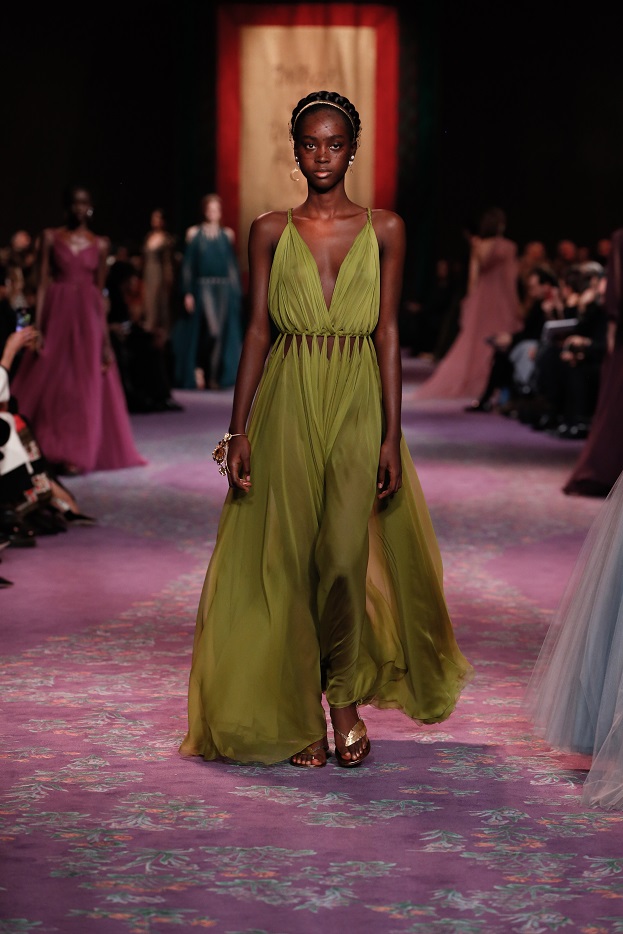 Going back to the origins of these ancient costumes extends the question “Are Clothes Modern?” – as a recurring thread in Maria Grazia Chiuri’s creative process – while enhancing Dior’s codes. These new reinterpretations are given a marvelous palette, wrapped in braided cords. 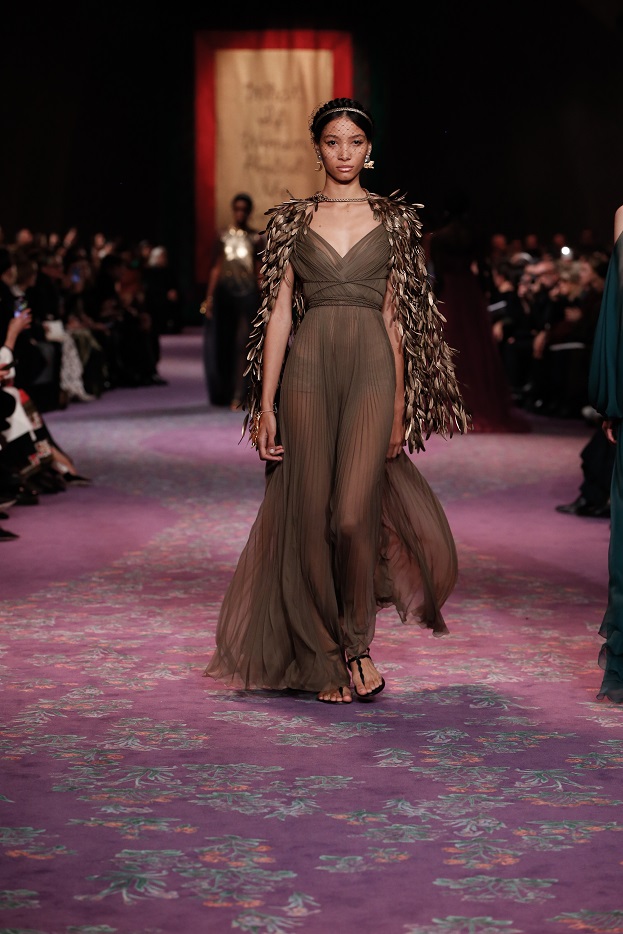 As she developed her looks, the Creative Director drew inspiration from classical representations of goddesses, such as Athena. Her majestic allure is a neo-platonic allegory of beauty, magnified by iconic works such as the Winged Victory of Samothrace and Primavera by Sandro Botticelli, combining intellectual strength and aesthetic harmony. 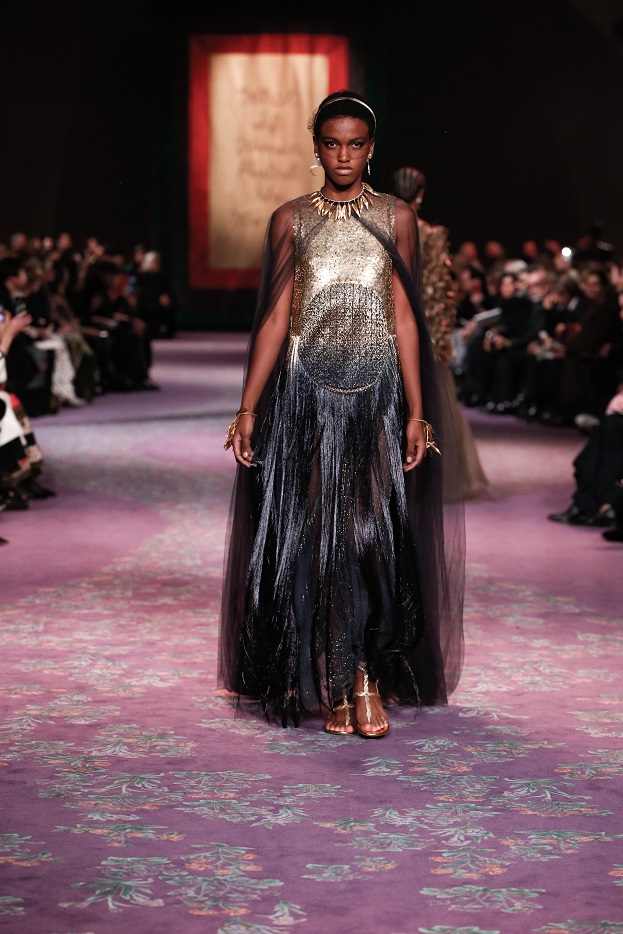