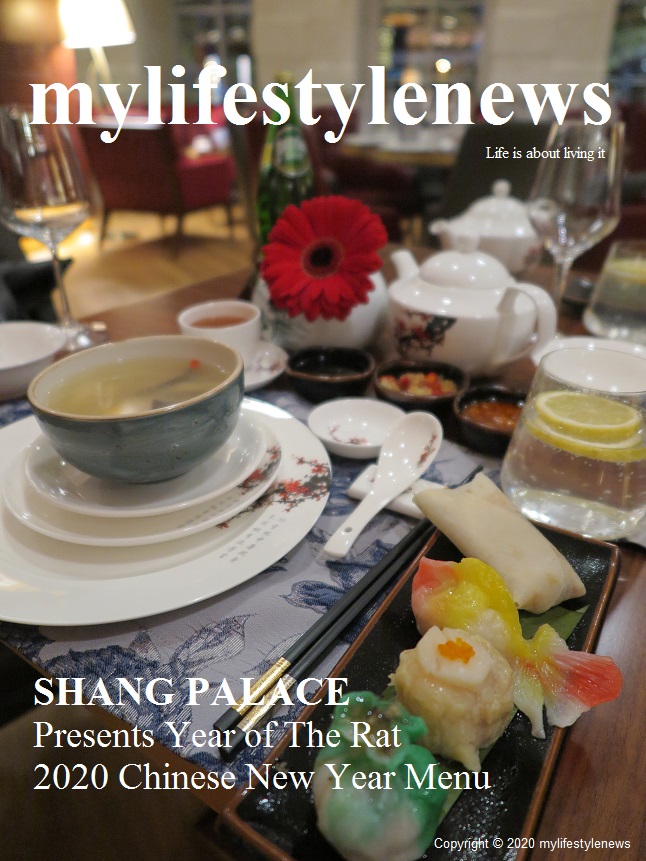 While Shang Palace Shangri-la Dubai has been delivering its Chinese gastronomy for the Chinese and Asian community in Dubai as well as the locals alike in the past decades, entering the Year of The Rat in 2020 Chinese lunar calendar with most anticipation, the restaurant has specially crafted a prosperous 11-course menu symbolizing good luck and good wealth to whet your appetite for some delightful Chinese New Year dishes. Celebrating lunar Chinese New Year in a foreign land can somehow be a challenge especially when and where to look for a traditional Chinese New Year’s meal that translates nostalgic memories and emotions that makes you feel less home-sick while craving for those salivating home cooking Chinese New Year dishes to satisfy your yearning. With the Shangri-La, you are very much on a safer ground even the Shang Palace Chinese restaurant that is not in Asia but yet maintains the consistency to deliver the close-to-home comfort palate to satisfy your craving. When it comes to personal taste, it is variable from one to the next, but at least we knew we were in for a treat this Chinese New Year in Dubai. Finding the right ingredients from the local market can be a challenge by the culinary team due to some import restriction and also limits their talent with the know-how and skills to bring out the best taste and flavours from their talent. Hence, it may lose the authenticity from the taste of its origin.  Most of the time, the chef will improvise with an alternate version by introducing their most traditional way of cooking and presentation to suit the local palate in which many may not know how to appreciate the best of flavours. If it is done properly, a fusion alternative could be another great invention, but failure to which, it could then turn out to be a disaster and being like the locals and many other by consuming food that they think its best suits their palate but definitely has lost its charm from its authenticity flavor. The culinary team at Shang Palace Shangri-la Dubai has done a great job in maintaining close-to-home flavours, even if occasionally the taste is not what we expected, but streets ahead of many other competitors. mylifestylenews writes. 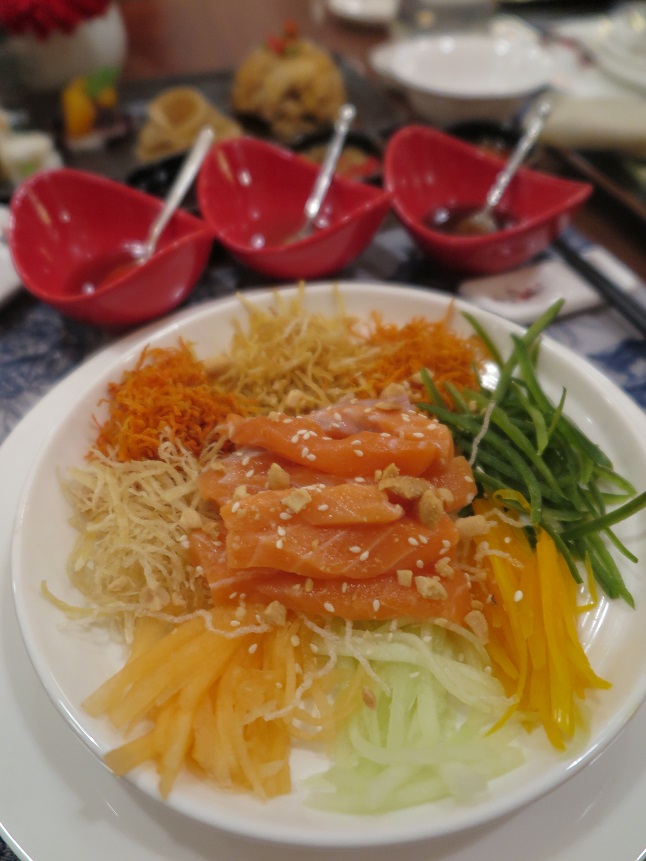 <Chinese Rainbow Combo Fish Plate>
The Chinese New Year Dinner begins with “Lo Hei” or “Yu Sheng” – a tossing salad with raw fish to be reminiscent as the wishes for a better achievement for your work as well as better wealth and prospect. This combination of ingredients has to be raw for its activeness, alive and better achievement in work and life, ranging from a combination of julienned greens and salads such as carrot, chili, turnip, cucumber, pickle, pomelo, onion, parsley, spring onion, ginger and etc to get the colorful rainbow effect and with a bed sliced raw fish (salmon are used here) being marinated and cured with hard liquor. The salad is to be tossed together by everyone on the same table as high as possible with homemade plum sauce. Every toss spells out with good wishes and blessing in bustling noise to share such jolly time. Shang Palace version of Lo Hei may not have all the right combinations and the right sauce to stimulate your palate, and the salmon was sliced into a thick cut and chewy that lost that delicacy of touch. But, the intention by making this festive dish and present it onto the table especially in this region counts, as there were lots of mise-en-place involved to make this a truly memorable dish to celebrate in such festivities. 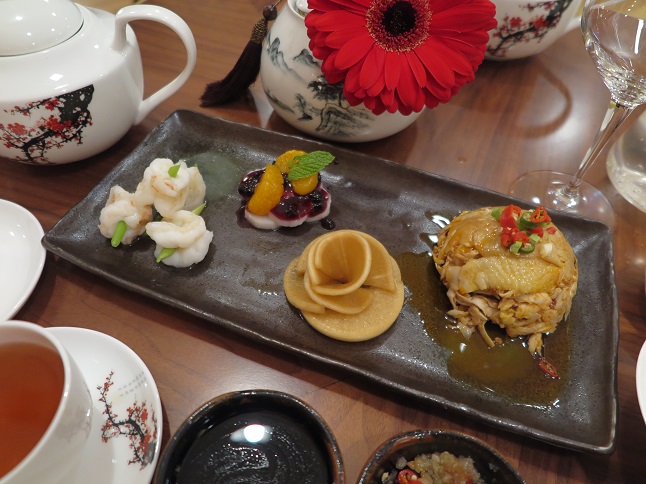 <Shang Palace’s Delicious Platter>
This cold platter dish is a selection of chicken, shrimp, blueberry yam and marinated radish. This presentation was perfectly done and surprising in a way. The shrimp was so fresh, springy texture and perfectly cooked. The marinated radish was very piquant and with sweet and sour elements on the tongue. The blueberry yam was a welcome surprise in presentation and flavour and utterly delicious. The Sichuan style chicken was equally delicious with a hint of the heat from the chilies. 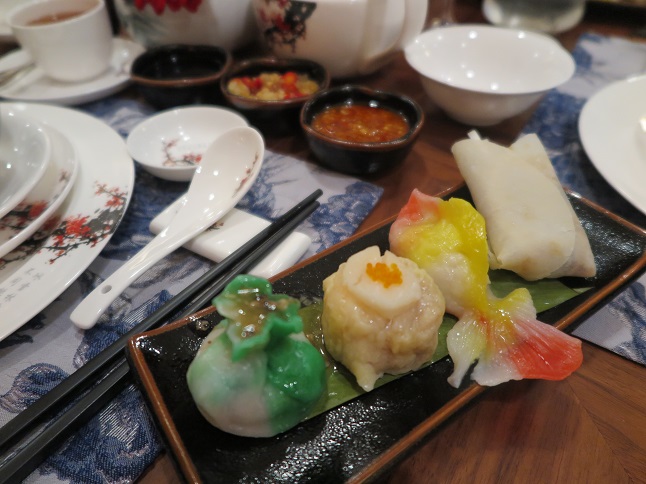 <Signature Dim Sum Platter>
While steamed Dim Sum dishes are not exactly for Chinese New Year, restaurants these days would do it as an extra value and for the courtesy by popular demand.  The signature Dim Sum platter is the first main course dish served with a gorgeous presentation that is colourful and eye-catching. The Scallop Sui Mai was excellent in texture despite chicken being used for its filling. While the fish dumpling looked great in presentation that came as a fish model but the wrapping dough was too thick and made for an unpleasant palate in the mouth. The duck roll was pleasant in flavor, but the pancake was cold and a little too heavy – some lightness in touch here would have made this a winner too. 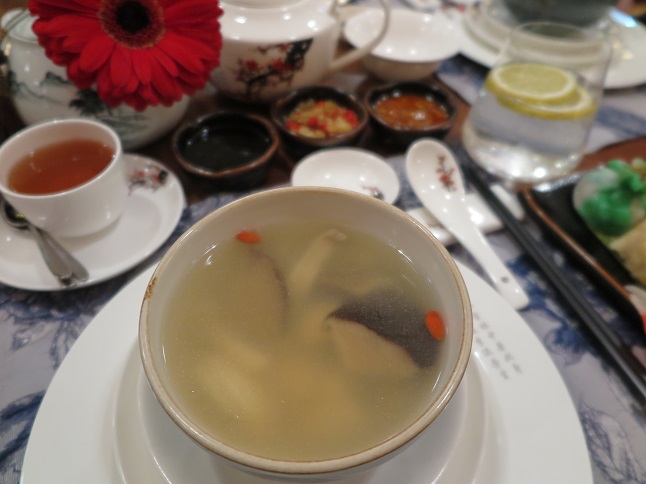 <Emperor Steamed Sea Cucumber and Abalone Soup>
While soup dishes are an essential must-have when it comes to Chinese dinner, the ancient Chinese knew how to make good clear soup for its wellbeing intention in the past and old and traditional recipes are being shared among good chefs and many others till present. The clear broth is quintessential with a light taste derived from all the essence of the premium ingredients used and is an absolute winner. The delicious soup stock was a chicken base, with one whole steamed abalone and small crunchy morsels of sea cucumber for texture. A good way to warm up your appetite! 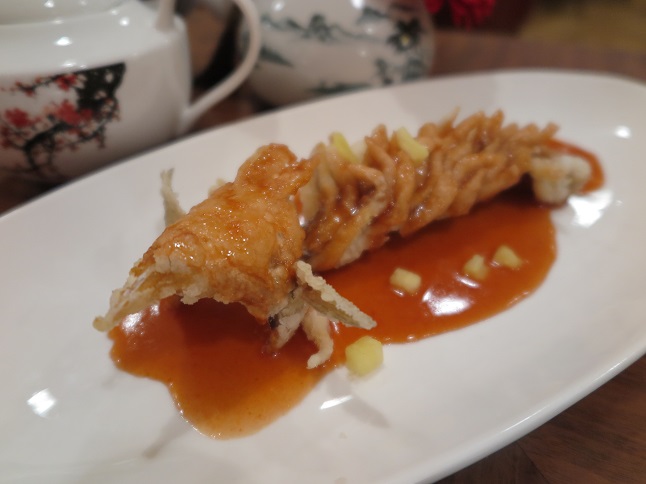 <Deep-fried Garoupa with Sweet and Sour Sauce>
Mandarin fish were commonly used in China for this prosperous dish. The fish were supposed to be sliced to a diced cube size and battered well with flour and deep fried to its light crispiness and topped with sweet and sour sauce. While the presentation of the fish was rather strange and it seemed looking like an ‘Alienized” fish appearance, yet the garoupa meat was tasty, but did not come to the table hot and it was soggy and did not have one bit of crispiness to be expected. 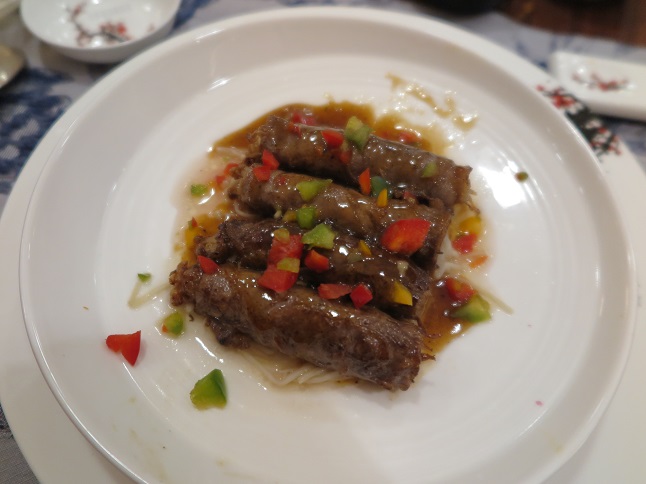 <Sliced Wagyu Beef with Mushroom>
A very flavoursome dish, but we would not describe it as a Chinese dish in this incarnation, as it tasted more Japanese influence instead. It was delicious nonetheless. 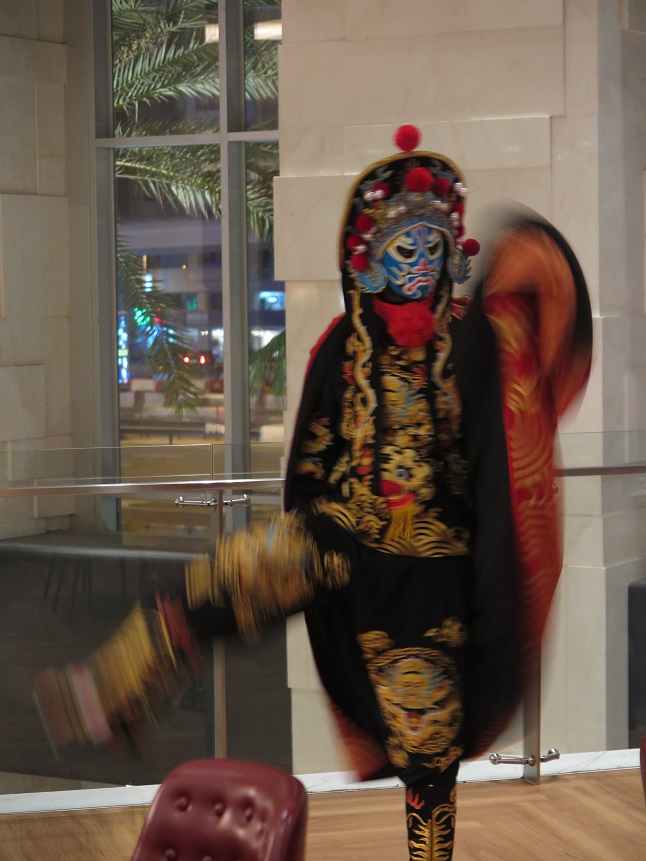 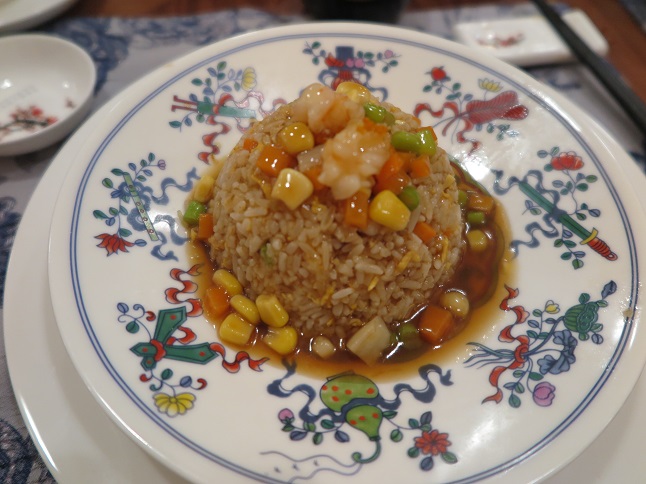 <Shang Palace Fried Rice with Seafood>
Unlike the regular fried rice dishes that are usually being served dry and fluffy, this version of fried rice from Fujian province has been well liked by many other Chinese and Asians for its light starched gravy for alternative enhancement. A good dish in all respects and well prepared. 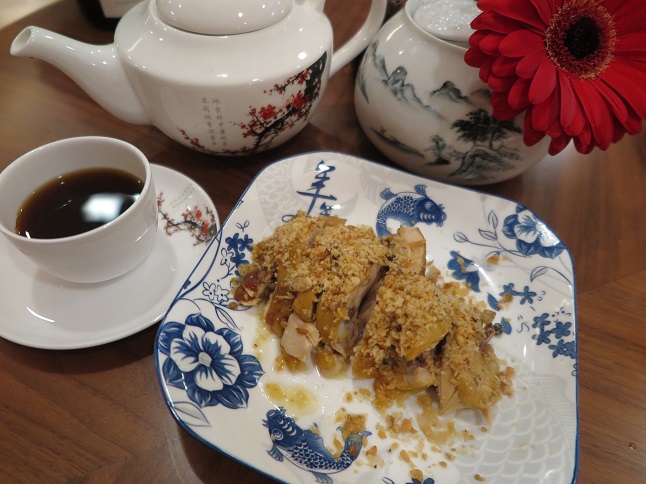 <Hong Kong-style Barbeque Chicken>
This chicken did not have a BBQ taste or texture, but rather deep-fried and below lukewarm temperature. Something less and the menu description did not match what one tastes on the palate. 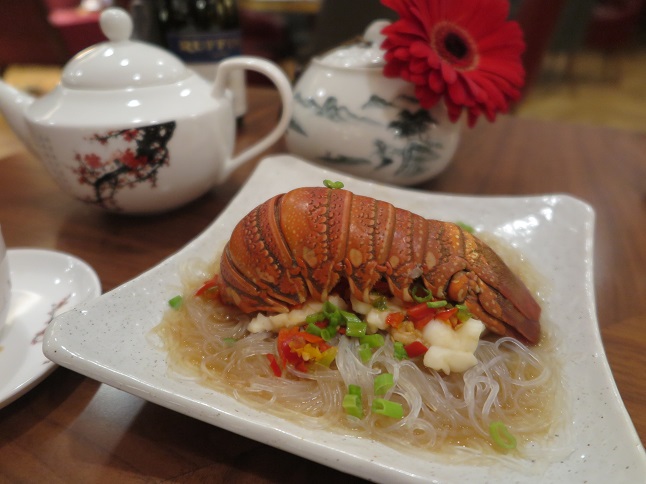 <Steamed Canadian Lobster with Sichuan Sauce>
Excellent presentation but the lobster was a tad overcooked and bland in flavor and the glass noodle did not absorb the supposed tasty sauce that usually becomes the highlight with such a superior dish being served . 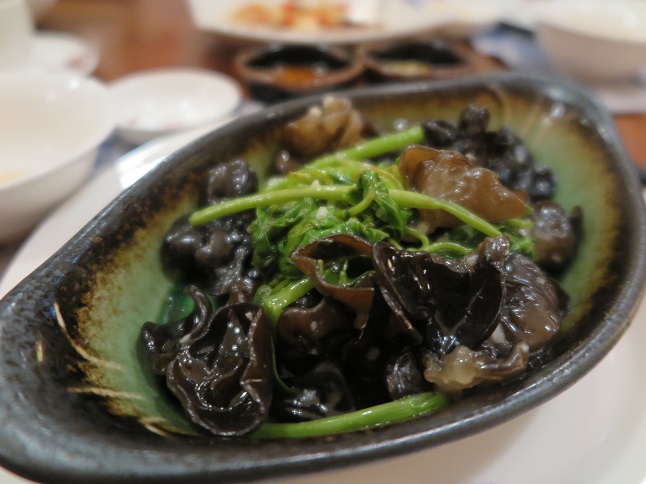 <Stir-fried Kangkong with Garlic Sauce>
Despite Kangkong (Chinese watercress or morning glory) shall not be used over Chinese New Year menu for its hollowness in its stems that is representing emptiness and poverty in the superstitious belief, the taste of this dish was absolutely spot on! The Kangkong was finely cooked with high heat in seconds with the great touch of black fungus and minced garlic. 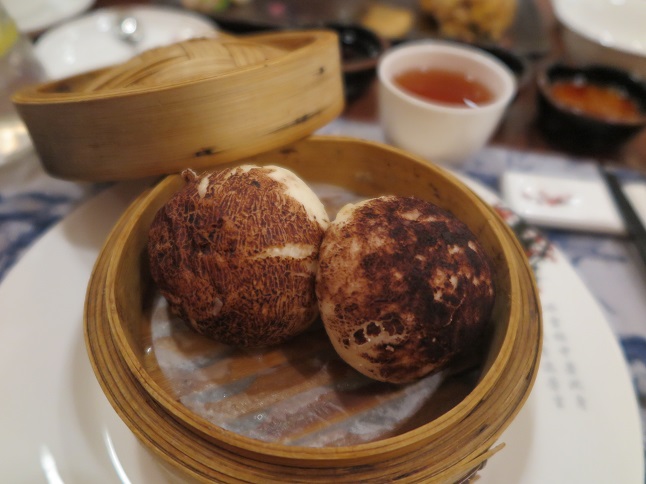 <Steamed Mushroom Bun>
Technically this was not on the menu, but we wished to include this as the presentation looked great that it was being made to look like a real giant mushroom instead of a bun. As it transpired, this is a signature dish that you have to try and quite tasty with a hint of truffle oil. 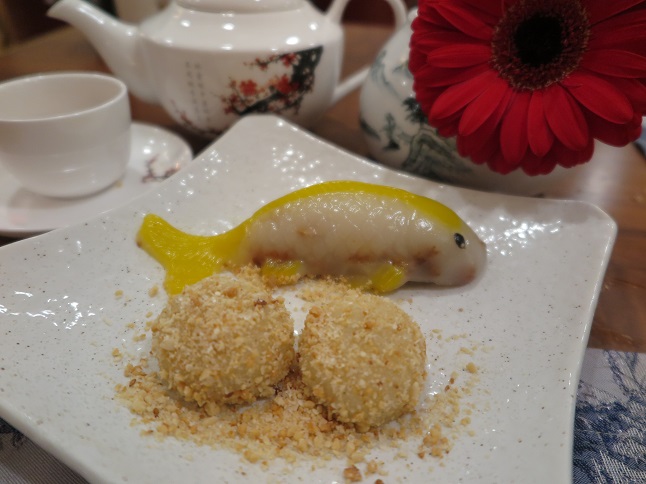 <Glutinous Rice Balls with Sesame Seed Paste and Rice Cake>
A good finale to round up the entire crafted Chinese New Year menu with a lot of effort on presentation and the taste was fantastic! 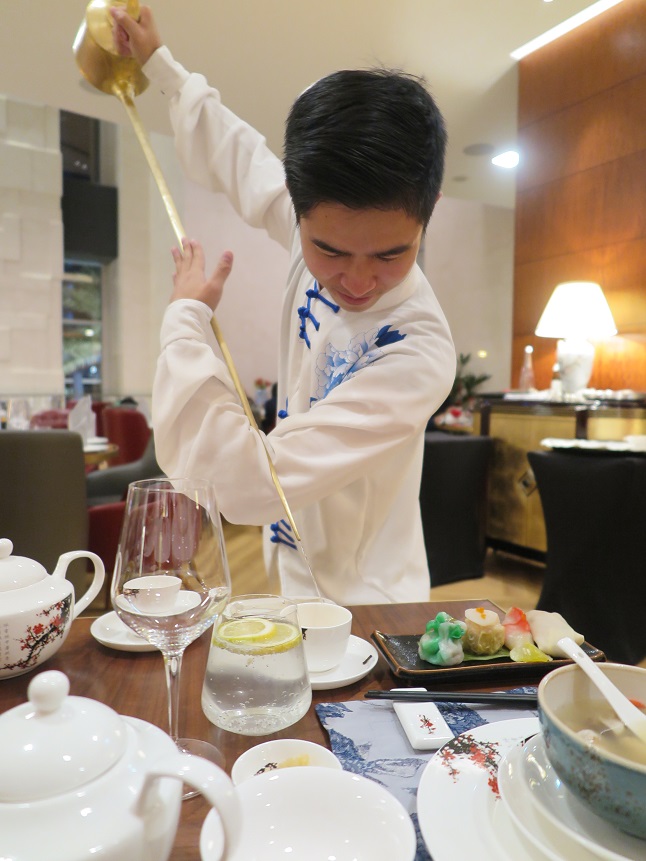 The Chinese New Year menu was in no doubt carefully crafted to fit in to the festive mood despite every dish not being executed to our taste nor authentic flavors being delivered due to numerous challenges mentioned above, at least the detail and intention as well as the effort being put in to make this work was more than a plus as well as a small performance of Kung Fu Tea presentation and traditional Face Changing performance. With the attentive and prompt service from their service team after they re-opened a week ago from a soft renovation, the new look is there to enjoy a ubiquitous Shangri-La ambience.