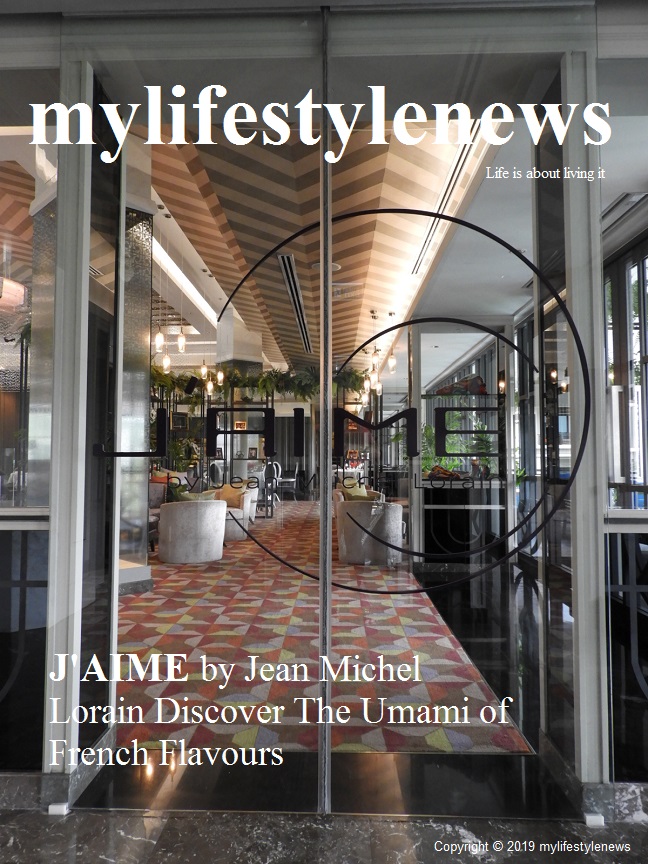 Celebrated Michelin Star French Chef Jean Michel Lorain had set sailed for his gastronomic and culinary adventure in the far east over the years and his star restaurant J’AIME is discreetly sited in an Urban Resort in U-Sathorn Hotel in Bangkok and continues to delight his guests with the umami of French flavours. mylifestylenews writes. 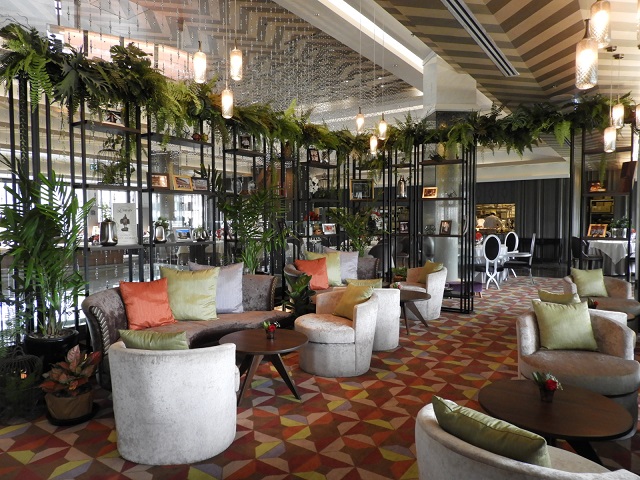 Tucked in a location that is not very far away from Lumpini Park, but finding it can be a little of a challenge, if your taxi driver is well aware of the Sathorn neighbourhood renown for its maze of narrow lanes and roads which stashes quite a few hidden gems like unique restaurants and local eateries, small boutiques as well as art galleries with surprises that are totally off the tourist beaten tracks to be discovered in this residential neighbourhood. 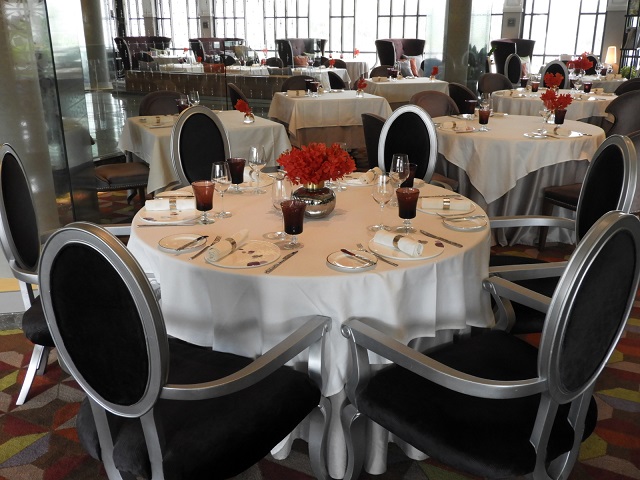 Bangkok is not short of unique dining experiences, cool concepts, classic fine dining and the list goes on. There truly is something for everyone and can be found in the least expected of places. So we were intrigued about this location and what uniqueness it brought to the table, as it were, as they do have the catch phrase “Make every day an occasion at J’AIME”. Well, we certainly wanted to make an occasion of it, as the dining room has a chic cool interior style that gave off a vibe that it was not your average dining space. Jean-Michel Lorain is actually the owner of the Michelin stars Côte Saint Jacques restaurant and hotel in Burgundy and is recognized as one of the most highly respected chefs in France. 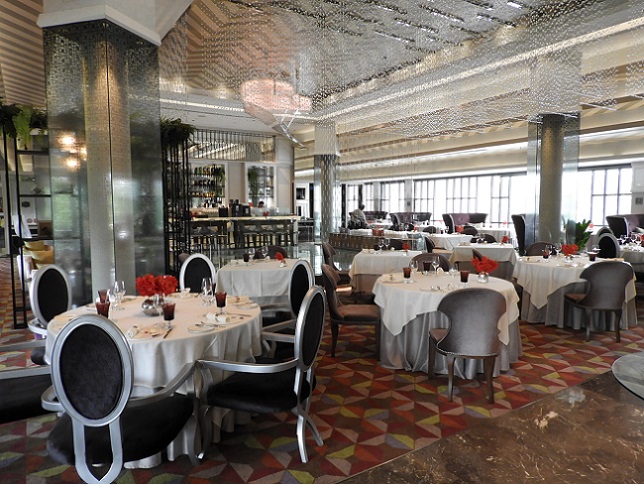 Teaming up with his father Michel in the family business, the Lorain’s culinary efforts had been justly rewarded with the restaurant’s first two coveted Michelin stars being awarded to Michel in 1971 and 1976 with a third following in 1986. The Bangkok outpost is helmed by the Italian native Chef Amerigo Sesti who has worked in a number of Michelin-starred establishments throughout Europe and before relocating to Thailand he honed his skills to a fine degree at Jean-Michel Lorain’s Côte Saint Jacques, under the tutelage of Jean-Michel himself. 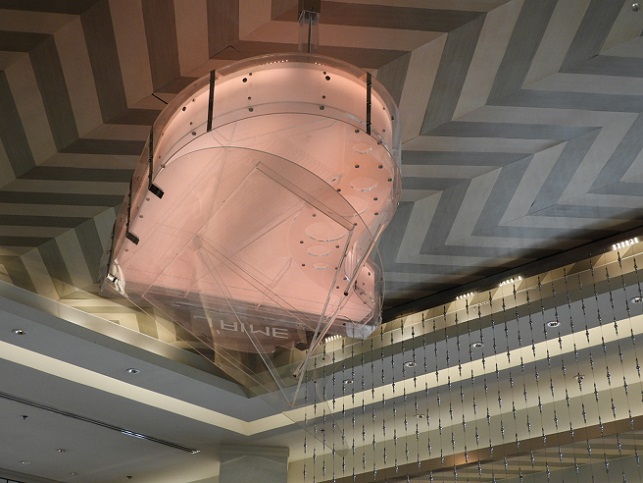 Naturally, we had high expectations for our dinner with all this knowledge at hand. We had changed our original reservation which was not fully communicated, which created a little confusion on arrival, but we were promptly seated and so the fine dining experience began. Given that so many new dining destinations are trying to be too clever in their culinary execution, we were looking forward to some beautiful food that would resonate with us because the ingredients will speak for themselves. 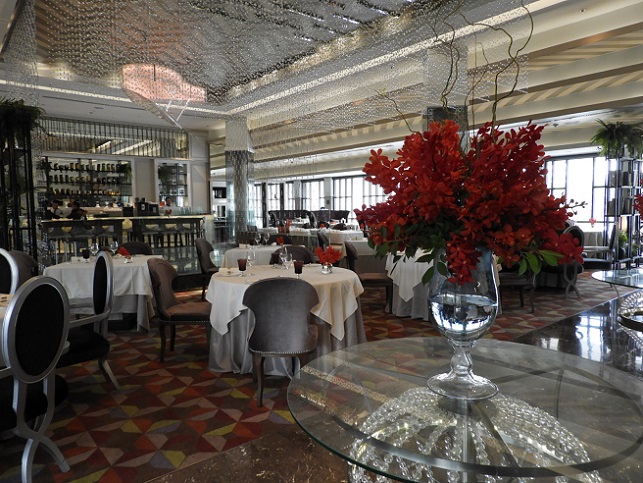 After perusing the set menu and being asked if we had any allergies, we requested a change for one of the seafood dishes to something else, so they suggested foie gras to replace one of scallop dishes for one of us, which was the perfect choice for an entrée dish. 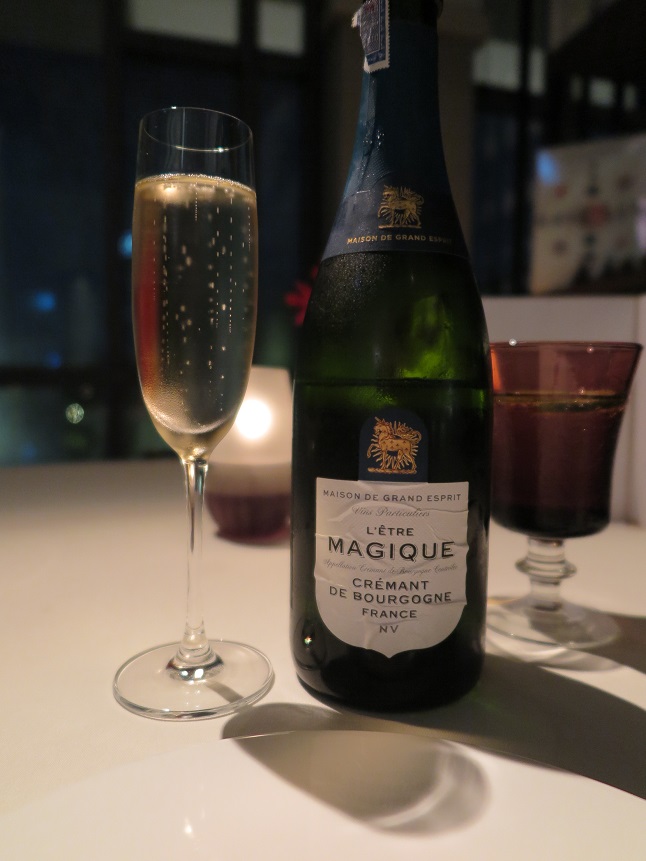 We opted for the wine pairing and prepared ourselves for a beautiful marriage of food and wine, which began with a very elegant glass of L'etre Magiqie, a sparkling wine from Burgundy made using the traditional champenoise method and it was perfect to kick off the evening. A delicious trio of vegetarian canapes was presented to set the taste buds ticking over and a perfect accompaniment to our sparkling wine. 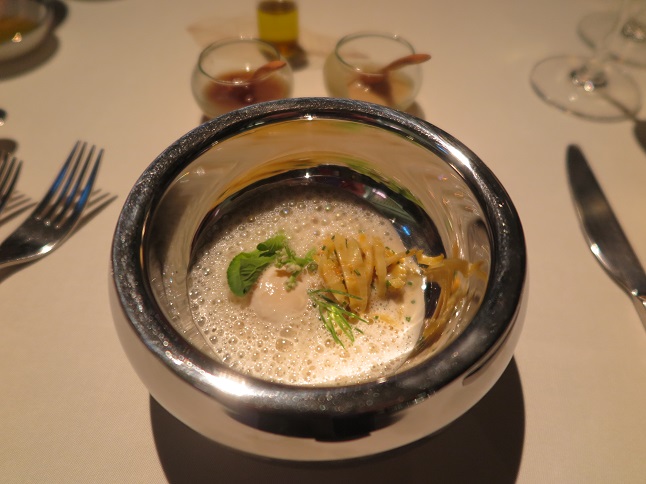 This was followed by the Amuse Bouche, consisting of a poached quail egg with fish stock foam, white wine and herbs with sea pineapple (like sea urchin). It was a delicate combination that resonated with us and had us looking forward to the next course. 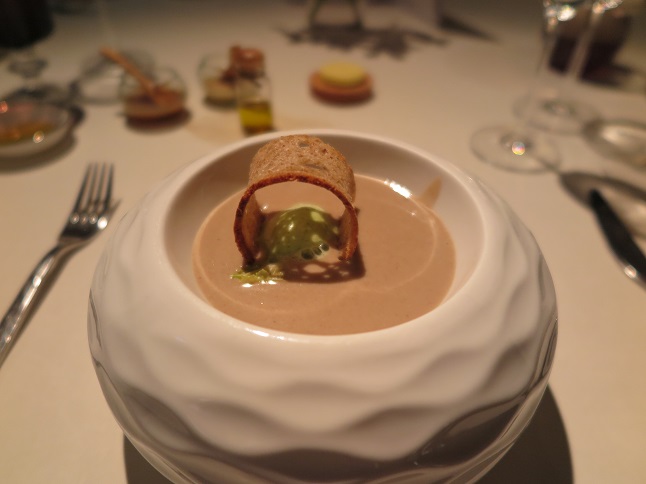 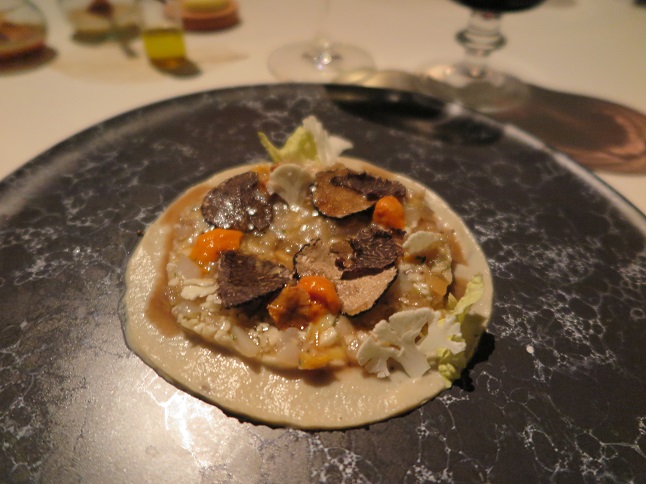 Next was a scallop and sea urchin tartare, clams. Local pickled chanterelle, cauliflower and black winter truffle. The presentation was ambitious but visually may not be as “sumptuous” as it looks. But hey, do not judge the book by its cover too soon, such a crafted creation was being thought through and it was a very delicate dish with distinctive flavours that perfectly blended into a homogenous presentation that had so much to say on the palate. 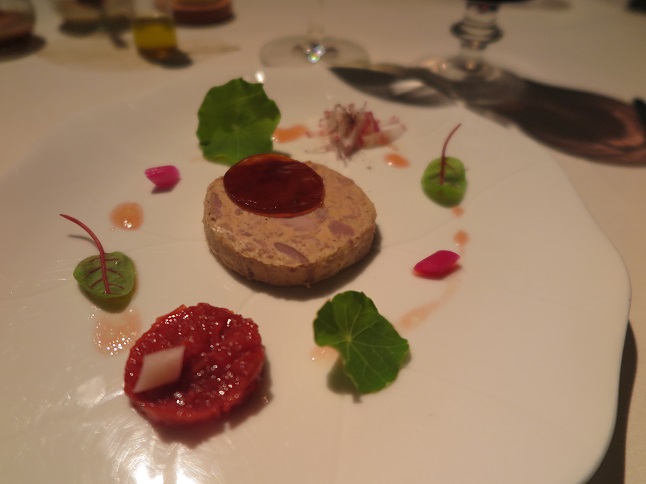 As one of us was not into shellfish, we were served foie gras with radish puree and toasted bread. A total classic French dish with a twist – the radish puree – with rustic and impressive flavours. 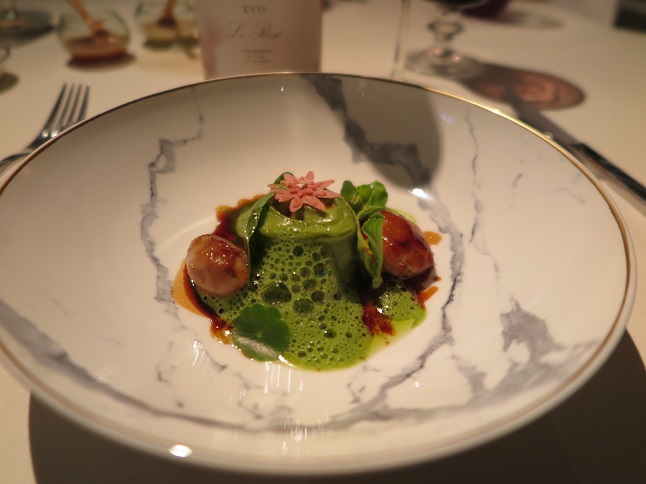 It was wonderful to see a pasta dish on the menu: Pennywort pasta gratin, frog legs and declinaison of cabbage and shallot. Pennywort is from the spinach family (a local ingredient) and was the perfect foil for the rich and tender frog legs and the pasta gratin is a great foil to the rich meat and sauce. A triumphant dish! 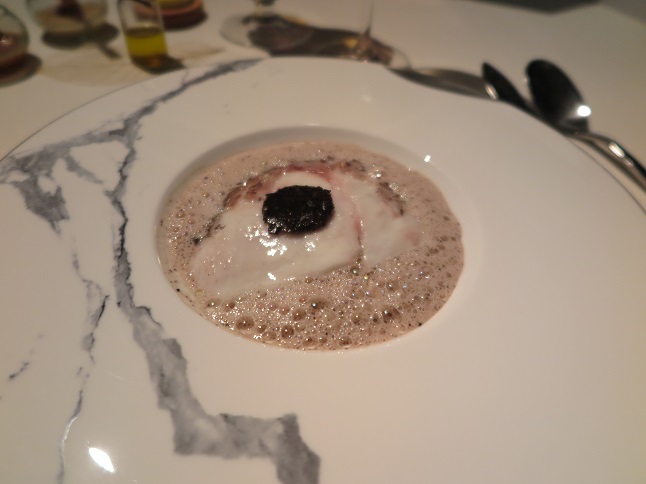 Steamed Umemadai served with celeriac julienne and truffle butter is another delicious discovery. Umemadai is a white fish akin to sea bass and is very delicate and with a hint of sweetness from its flesh. The other ingredients played a crucial part in creating a very special dish, including a rich sauce that was not too heavy. Unfortunately there were fish scales in one of the servings, but other than that, a superb combination of textures and flavours. 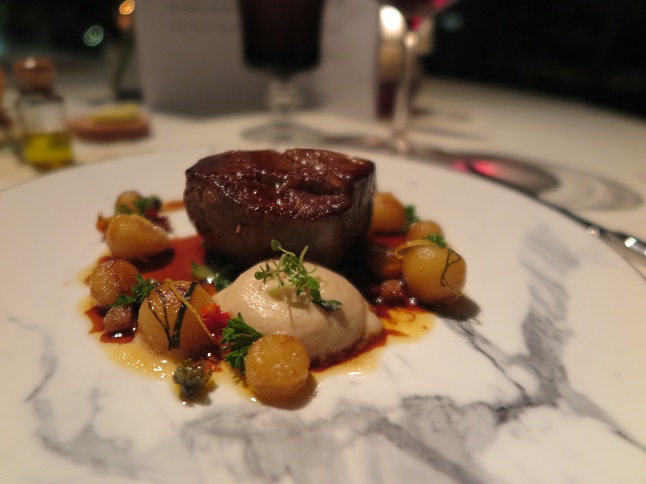 Pan-seared Kamui beef fillet, smoked paprika sautéed potato, capers, tomato confit and black garlic spume was most anticipated. The cut of meat is British Angus beef raised in Japan with lots of TLC and raised very sensitively. The lemon zest and black garlic foam were crucial to elevating this dish. The meat had a superb flavor and we could not get enough of this dish, as the flavor was so moreish! 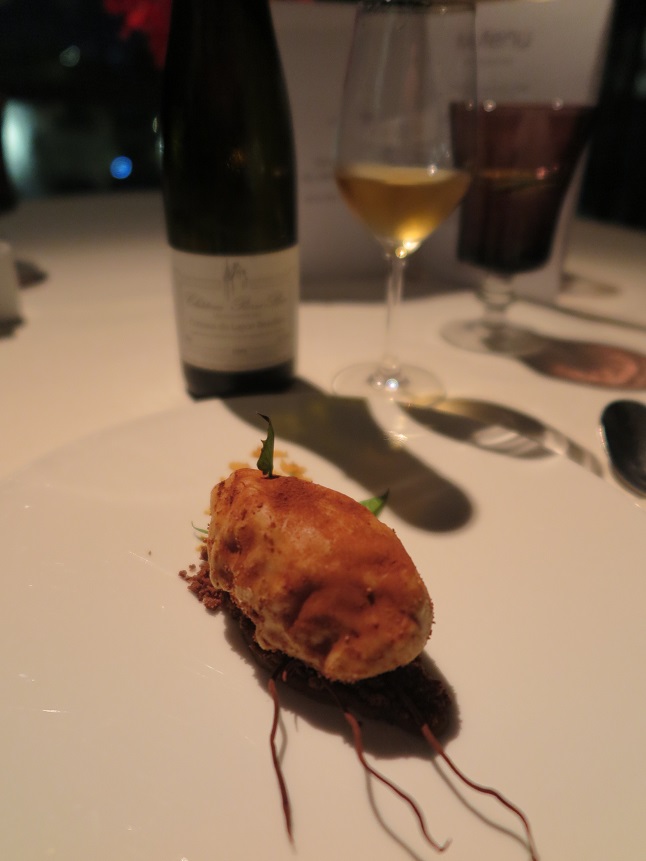 Before dessert, we were served a taster of olive oil and brown chocolate which piqued our taste buds, with a delicious texture and flavor. Lastly, a dessert of sweet potato, black cardamom and white chocolate to round up the evening with an interesting combination and well executed. There was a richness that was counterbalanced with the other ingredients which we savoured to the last spoonful. 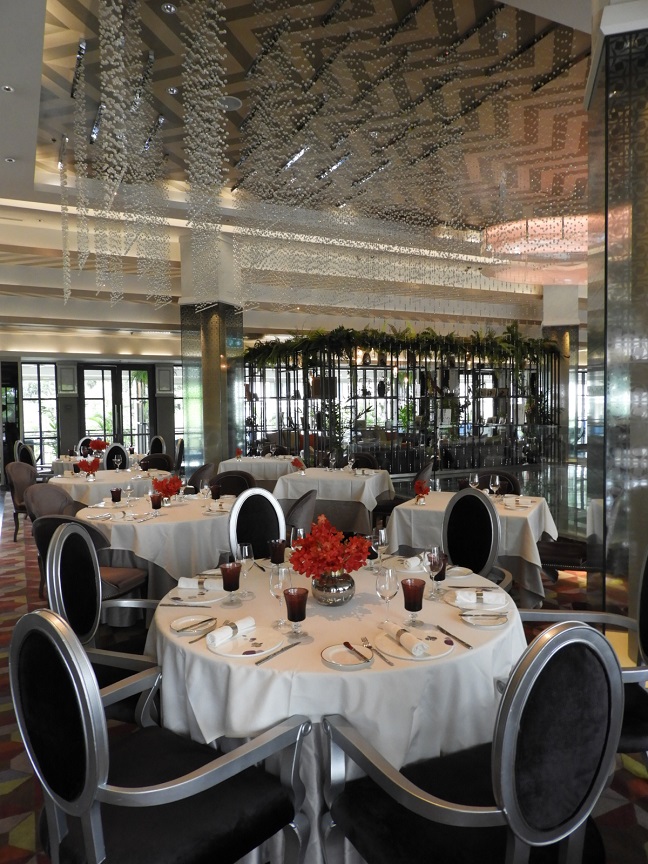 The front of house is helmed by Marine Lorain, the daughter of Jean-Michel and she provided a seamless experience that was to be expected from such a Michelin starred heritage. The service team had a great knowledge of each dish and the food rises above all other considerations with the unmistakable wine pairing that was perfectly judged and we had a memorable evening.