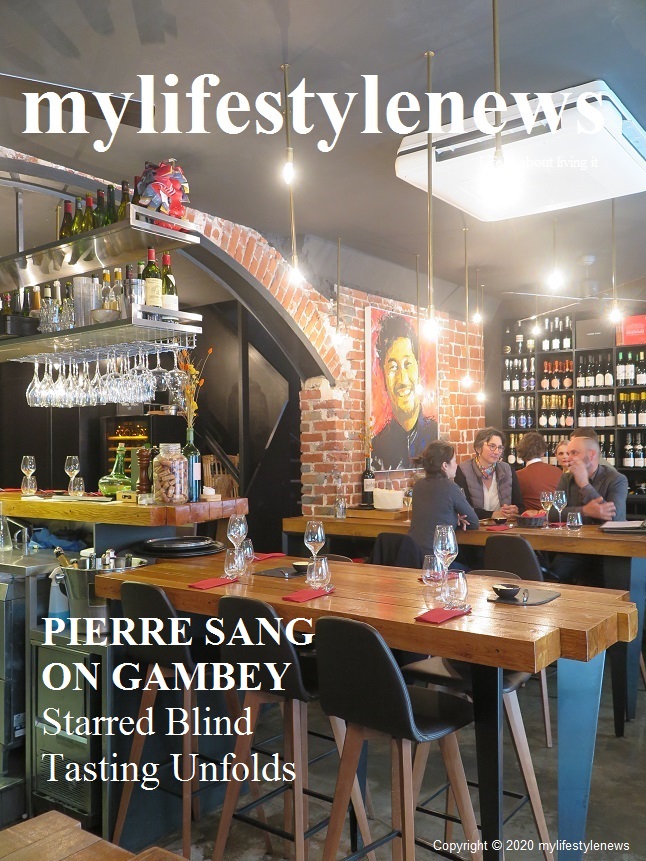 Dining out at the 11th arrondissement in Paris has never a dull moment, thanks to its multi-cultural immigrants that have lifted up and added so much vibrancy in the neighborhood and made this one of the most visited gourmand precincts. Minutes away from the 4.6km long Canal Saint-Martin, The French-Korean brasserie Pierre Sang on Gambey is our most recent find over a blind tasting lunch.  mylifestylenews writes. 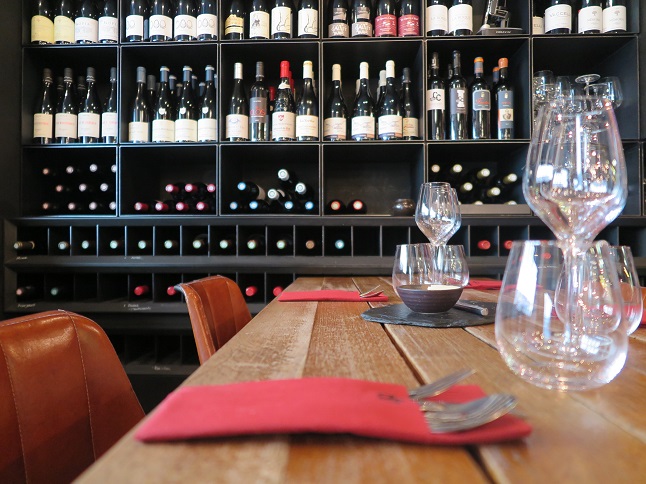 Since the opening of his first restaurant Pierre Sang in Oberkampf in 2011 at the bustling corner of Rue Oberkampf and Rue Gambey, the successful venture won him positive feedback and earnest recognition. His second venture for Pierre Sang on Gambey brasserie was born two years later on a surprising choice of location literary only a few steps away from the first. The Korean born French Chef  Pierre Sang is now a well-recognized Michelin chef  who has grown his empire to three restaurants, all on the same street and within a one block radius, 50 meters of each other and the fine dining concept restaurant Signature by Pierre Sang was the latest add-on to his ‘gastronomique’ sojourn in 2017. 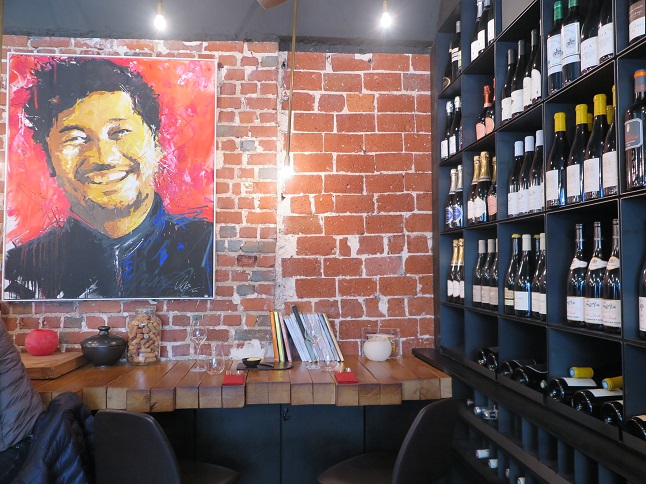 With his French culinary background trained near Lyon and he went on with the adaptation on modern take after finding the tastes and flavours of his country of origin in South Korea when he was 21. After numerous internships and apprenticeships, he achieved the completion of Club Gascon, a Michelin-starred restaurant in London. At this juncture, Pierre Sang became almost a household name in the new age dining scene after his participation in the Top Chef Television show and finished as a finalist. And now to dine in Pierre Sang for its Asian-influenced French cuisine is  written on many international food aficionados’ check-box waitlists to be ticked. All of his three restaurants are open 7 days a week for lunch and dinner, with all three very busy while we were given a short tour of them all. Just like many well-recognized restaurants everywhere, prior reservation is inevitable to avoid any disappointment especially if you are coming from abroad for your anticipated meals and to explore an adventure with new dining experience. 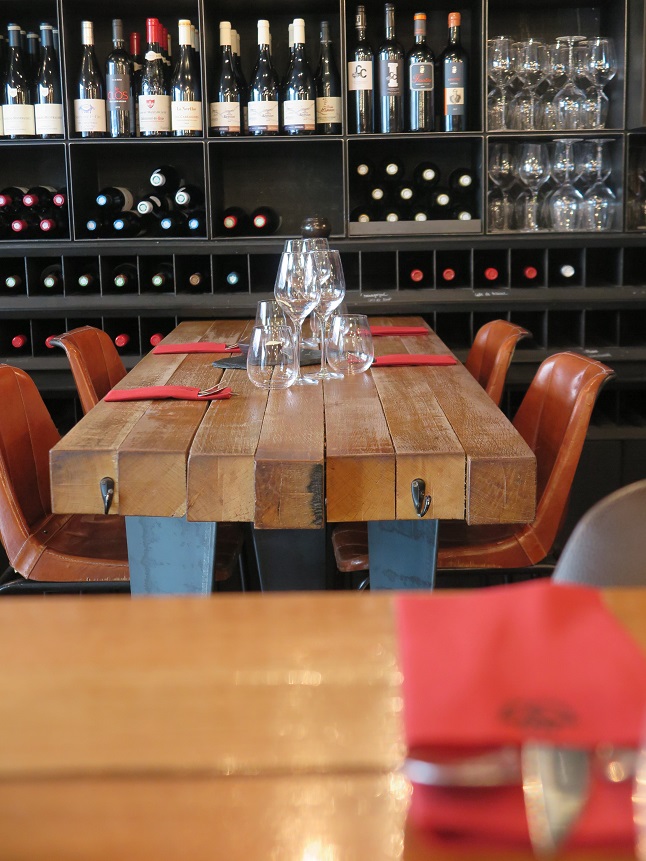 Set in a very intimate ambience, Pierre Sang on Gambey has a very chic and cool feel to it. Industrial sleek was the first impression upon entering this tiny brasserie with exposed red brick walls and polished concrete floors that are warm and stylistically curated; this leads to a very rustic feel with roughhewn high and low solid wood tables, modern industrial slim line pendant lights that are very unobtrusive, the touch of comfort in the leather seats and bar stools with mostly counter-top settings especially those facing the open kitchen where the most action takes place are mainly the most popular by demand. Black is a dominant colour, but the interior has a glow to it and the 30-seatings is not incredibly spacious either, but you feel you want to be a part of this dining experience, no matter what. 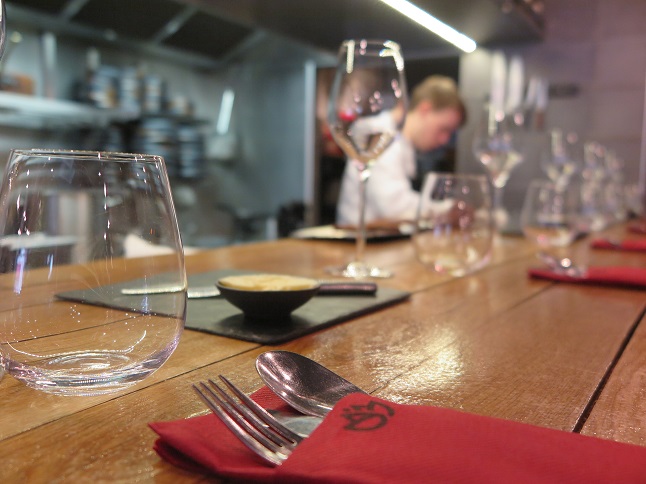 “Same Same But Different” logos are used and represented for each of his three restaurants, which is a lotus flower in three stages of growth – closed, open and then blossoming. With the marriage of Korean and French cuisine, Pierre Sang never stops creating interesting menus to fascinate his diners-turned-fans. Modern and trendy cuisine is served here with prix fixe menu ranging from two to three-courses for lunch and up to six-courses for dinner. If you are an adventurous foodie with lots of curiosity, the Asian-influenced French cuisine will definitely be your cup of tea. 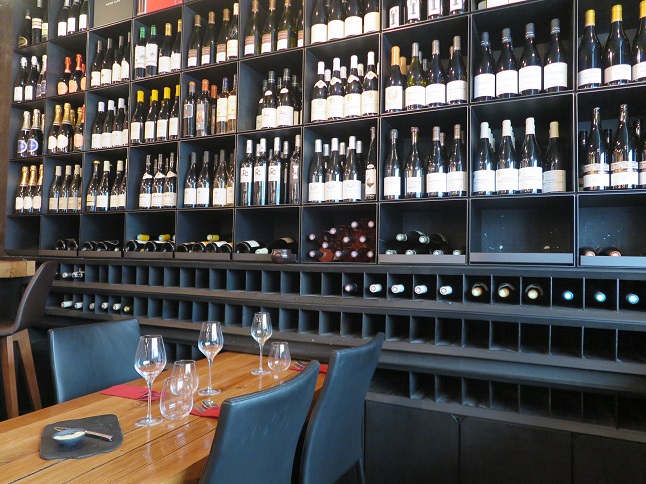 They pride themselves on their wine lists and each restaurant has their own curated list to create a distinctive pairing opportunity and our pairing was no exception, otherwise, you could easily look at all the wine on display to make your choice anyway.  A beautiful and generous glass of Laurent Perrier La Cuvee was poured (Pierre Sang is also the brand ambassador for the champagne house) on our arrival upon being seated and we chose the bar top dining with a big window by the entrance overlooking the street instead, to watch the world go by while sipping the bubbly champagne and that set the scene for much anticipation. 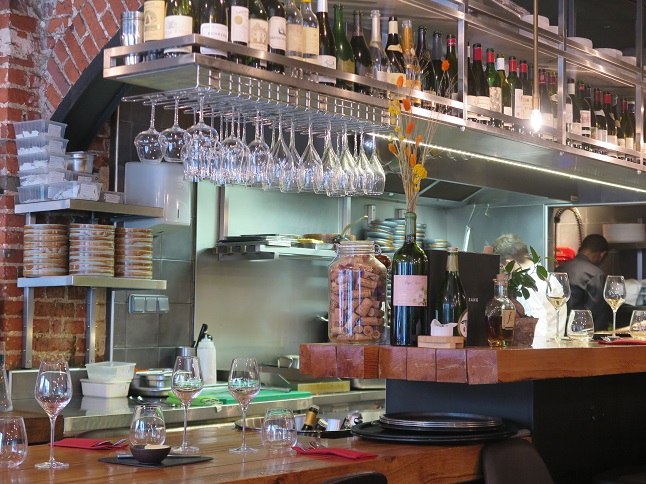 Basically there isn’t any menu given but questions were raised to avoid any food allergy or dislikes before the order is taken. Almost an Omakase concept by bringing the diners the freshest ingredients to the table on the current season’s favorites. While we were watching the open kitchen behind us and knowing that the food to be served is whatever the chef wants to cook and rather than tell you what you are eating when the dish arrives, they tease by letting you eat first and then testing your knowledge of taste to identify the ingredients. You absolutely won’t know what the menu beholds and only check on your table when you finish your plate that was served. First you to tell them what you have eaten before they tell you what was being served. The riddle will be spoken eventually. We loved this ambitious and unconventional approach yet comforting notion of diving into the unknown for a change. 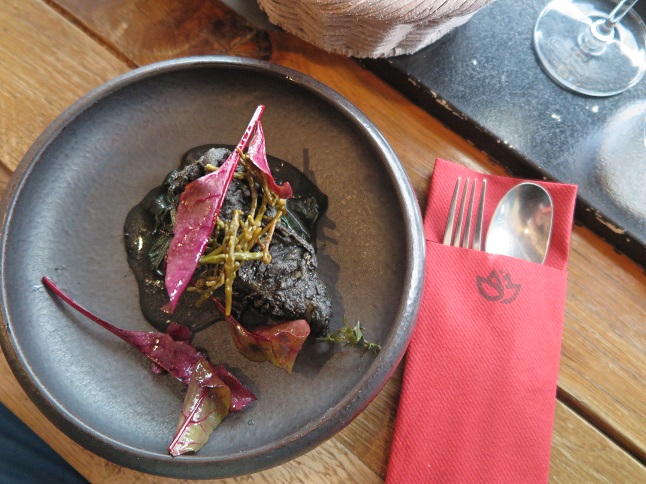 The knowledge of the Sommelier is more than trustworthy and very well spoken in English, hence, wine pairing is recommended and we let them pair the wines with the food to come. Our starter was a Squid Inked Deep Fried Cod Fish Tempura garnished with succulent salicorne from Brittany and a sauce of crème fraiche and onion in pork ribs stock along with spinach leaves and beetroot as a vegetable base to sit the tempura on. The first impression was quite striking and the taste was superb. The crunchiness of the tempura was perfect and such a sensational texture and taste on the palate – full of diverse flavours, at once very exotic and creative in presentation, unexpected but still very French in flavour. 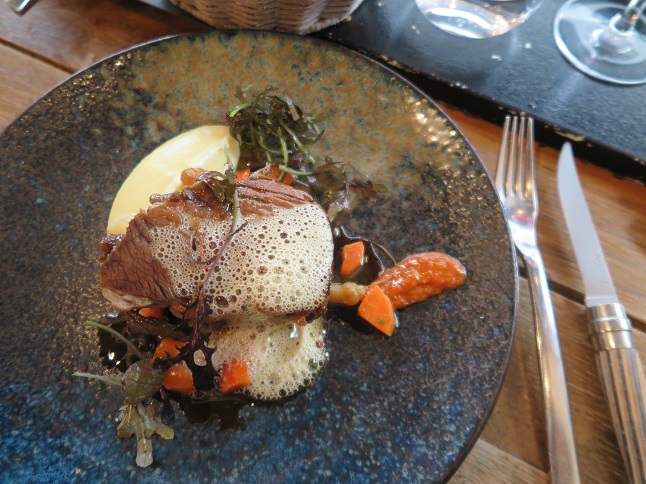 Beef Cheek was served as the main course over lunch with creamy mash, diced carrot in butter, crosne – a radish pickle which is a type of Chinese/Japanese artichoke, mustard beet, foam of foie gras and fermented Korean chili doen-jang paste as a substitute for mustard in Sang’s menu creation as a highlight and twist – which works. The tenderness of the meat cut like butter, and the doen-jang paste is an immense alternative for mustard and added a little kick and spicy piquancy to the softness of the beef while the crosne pickles gave a nice crunchiness with some sourness to counterbalance the richness of the meat, paired with the fruity ruby red Côte de Nuits Villages mise en bouteille par Dominique Laurent for an impressive balance of acidity and sweetness and lingering finish. 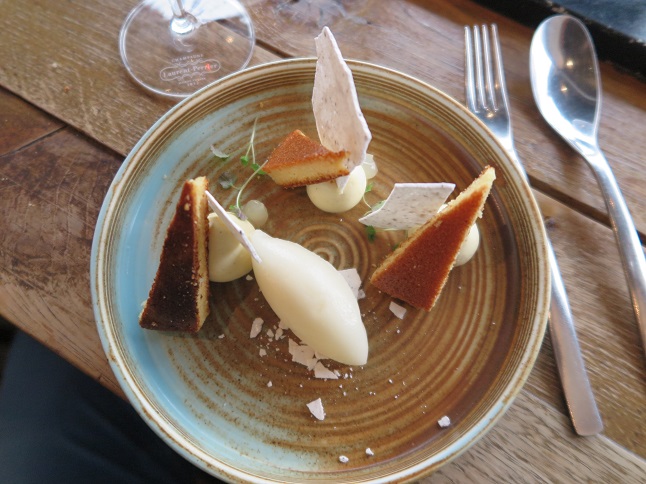 Dessert can only be described as an architectural assemblage on first glance! The Lemon Sorbet Clementine Ice Cream garnished with slivers of vanilla cream and white chocolate sandpaper meringue that have both savoury and sweet flavours. Then there was the Italian style recipe of almond sponge cake with Bergamont sorbet and gel with a white alcohol of rice. This creation blew us away. It is total triumph of flavours and textures that lingers and was a fitting end to a fabulous prix fixe lunch that never ceased to amaze us on all fronts. 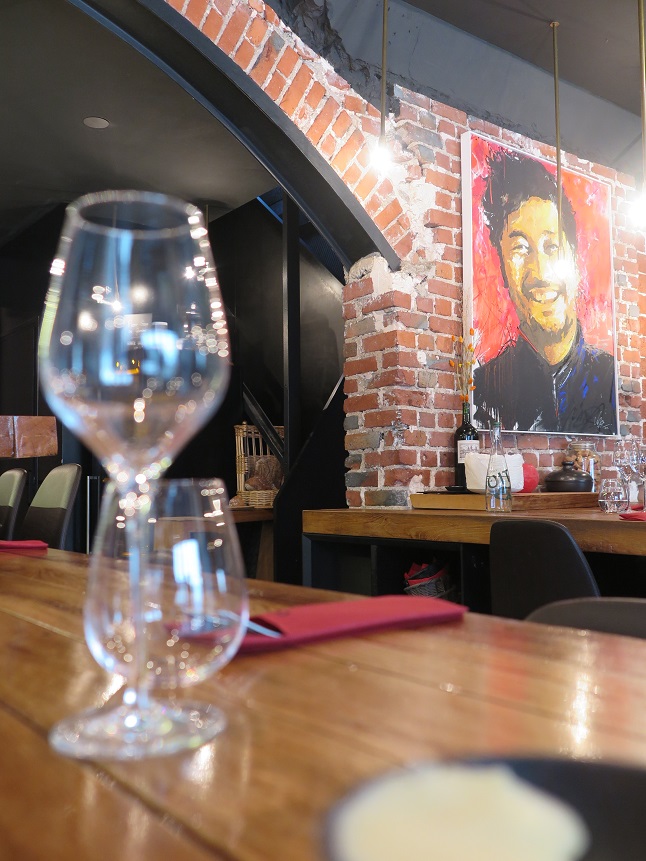 Pierre Sang’s conceptual cuisines may be new to some Parisian palates for his Korean touches, but dishes are artfully executed with the commitment to quality and freshest ingredients sourced directly from the nearest Oberkampf’s market supply and his culinary team prepared with care and with creative intent conveyed distinctly in each dish. There are a lot of hidden gems in this gastronomic neighborhood to be discovered, with the warm and well-organized service to share their passion on their product know-how, Pierre Sang on Gambey is one spot on in a new gastronomical discovery.

Email ThisBlogThis!Share to TwitterShare to FacebookShare to Pinterest
Labels: 《EATING OUT》, 《LIFESTYLE》, 《TRAVEL》, 《WINE AND DINE》 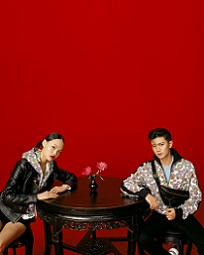 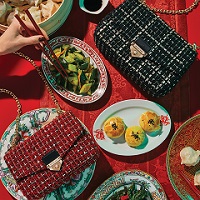 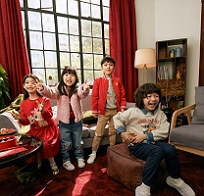 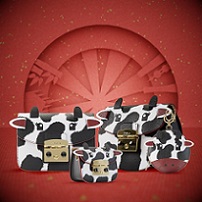 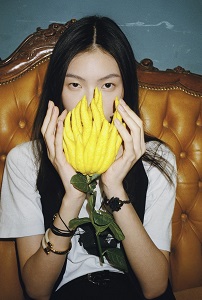 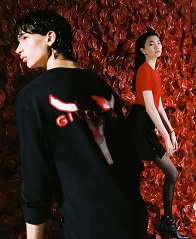 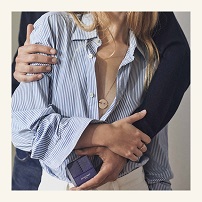