The Peacock Chinese Restaurant - A Taste of China 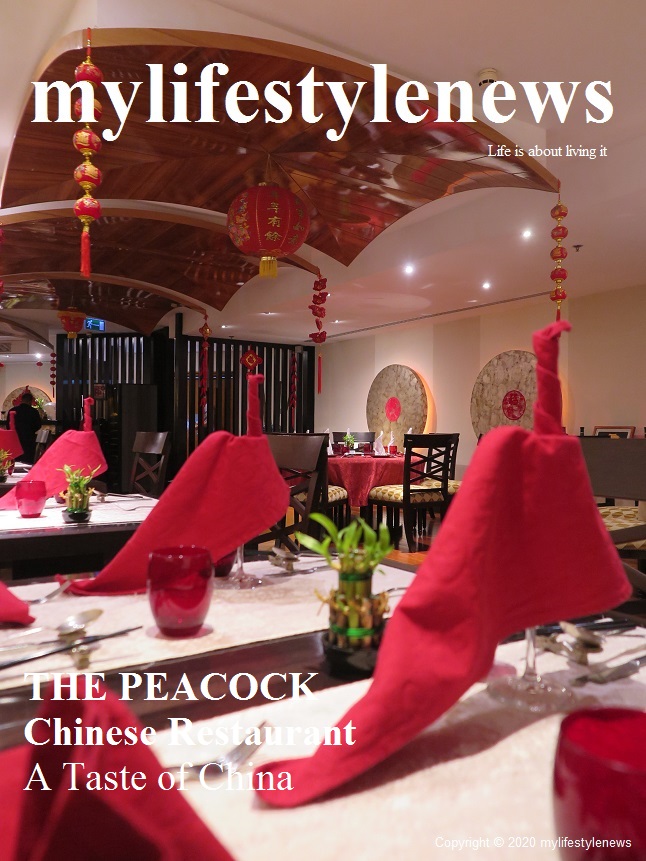 Finding authentic Chinese food is not that easy as it sounds despite the proliferation of Chinese Restaurants in many capital cities where there is a solid Chinese community and Dubai is no exception. While almost every Chinese/Asian restaurant claims that they serve the most authentic regional cuisine in Dubai with many other options that are to delight your palate in their own way of belief. Does The Peacock Chinese Restaurant in Sheraton Jumeirah Beach Resort have what it takes? mylifestylenews discovers. 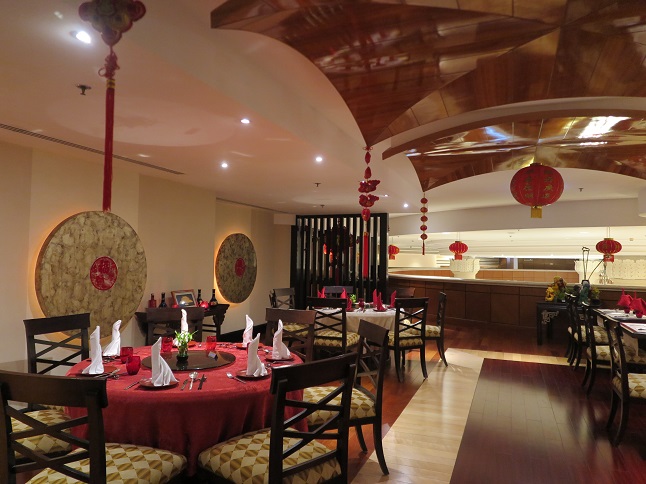 Over 20 years at the Sheraton Jumeirah Beach Road (JBR), The Peacock Chinese Restaurant touts itself as serving the most authentic Chinese and Szechuan dishes prepared by Chef Xiao Jun who hails from Beijing, so we were quite interested and anticipated to see what and how authentic flavors he can create in his kitchen with his non-Chinese culinary team. The restaurant itself is located on the mezzanine level overlooking the main lobby and has a very Oriental classic feel and fit out that could do with a refresh, but it is all about the food and service for this evening out. Our visit was on the second last day of the Lunar Chinese New Year, hence the Chinese New Year decorations were still up, adorned with a multitude of red lanterns, tassels and chilies ornaments reminiscent to good luck and wealth and also to brighten up the festive mood. 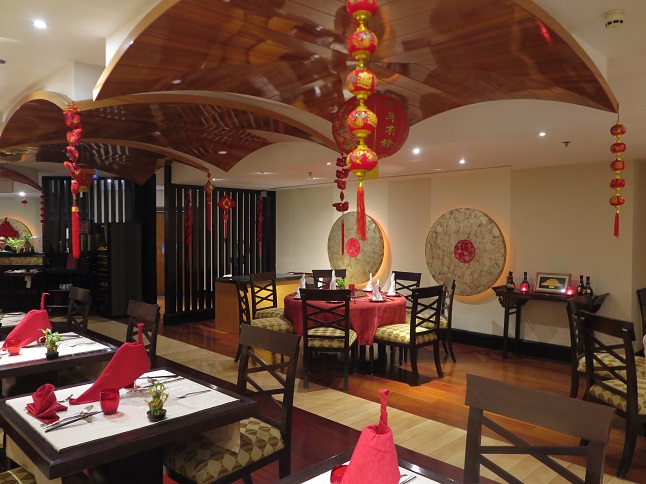 Red and gold are the preferred colors for Chinese to create a warmth and bustling yet contemporary ambience. Tabletops reference the Chinese touch with red linens and decorated with red water tumblers settings juxtaposed with the folded napkin in peacock motifs accompanied by miniature bamboo plants and candle lamps adding more color to the cozy restaurant. Dark solid wooden flooring contrasts with the hanging round panels on the walls with tradition paper cuts from the Lunar New Year decoration. 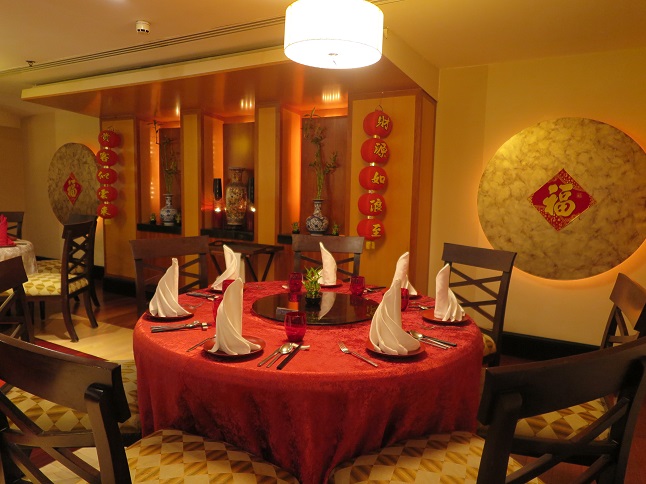 Tall celestial pillars from the lobby set a rather majestic mood that enlighten the ambience in the restaurant as well as decorative vases, huge hand painted fans mounted to the walls with traditional Chinese mountain scenery as well as peacock paintings representing longevity in Chinese belief. While the light background classic Chinese was played from the piped-in system, and you can also hear the woks in the kitchen being fired up which creates some expectations, so we were set for a most anticipated feast. 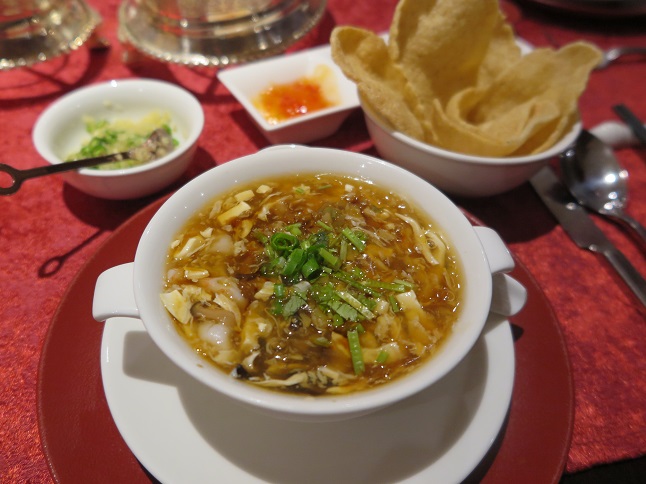 <Szechuan Hot & Sour Soup>
Soup plays the role as an appetite opener for any traditional Chinese dinner as it is not only to “warm up” your appetite but also to warm your empty stomach before venturing for the feast. Szechuan hot & sour is commonly find in any Chinese restaurant especially from the northern region as well as those Chinese restaurants in a foreign land seemingly becoming a must on their menu and being modified to suit the local palate and most of the time, it turns into a disaster. It is a common dish but many don't get it right for its complexity of taste and flavor from the ingredients used. The Peacock Chinese Restaurant version has most of the condiments right and quite generous in volume to get the right texture for not being overly starched to the overall presentation but forgotten the highlight of this soup by having the kick and pungent kick of the hot – from the chili and sour – from the vinegar. It was absolutely bland in taste and not any close to the taste of origin. A rather disappointed start! 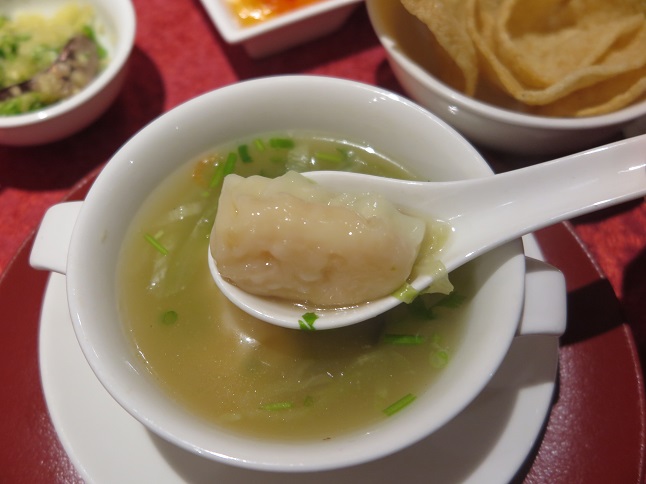 <Wonton Soup with Chopped Shrimp>
Another soup dish commonly found on the menu in any overseas Chinese restaurant is here to please. This light clear chicken broth was nothing surprising and the wanton paste dough was a little heavy and tough, garnished with seaweeds which was not really the version commonly known to any Chinese on such serving. 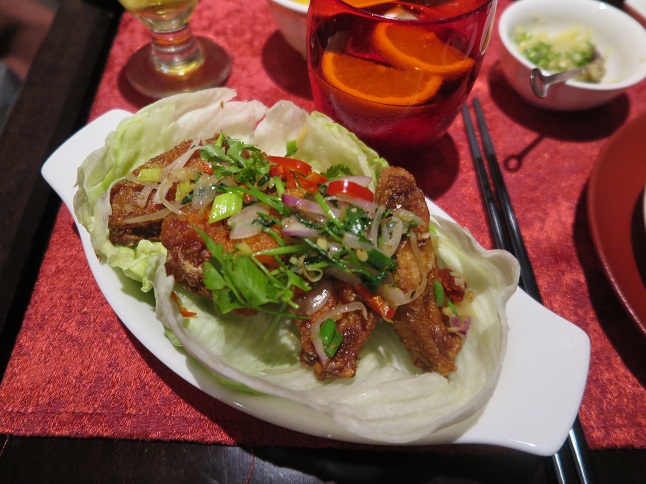 <Fried Chengdu Chicken Wings>
Not that we particularly love to have all the deep-fried items on the menu but the Fried Chicken Wings - Chengdu version was quite aromatic and enticing that was garnished with lightly stir-fried Chinese parsley, onion, chili, pepper and salt. Such combination gives a pleasant fragrance while it was served hot to the table. For such a recipe, it could be a little more salty (which it is meant to be) for authenticity but a winner. 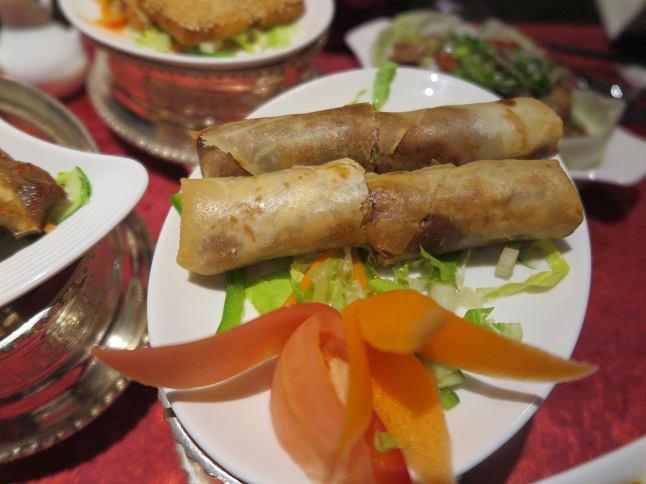 <Duck Spring Roll>
You may once again think that this is a non-Chinese diner must-order when it comes to any Chinese restaurant, as spring rolls are many people’s all time favorite as a snacker or appetizer to them. You are half right. The duck spring rolls here are quite outstanding, with a rich shredded duck filling that was well marinated, cooked and wrapped around with the spring roll paste that was deep fried to golden brown, halved and served on a bed of roughly chopped lettuce and decorative carrot. A must order! 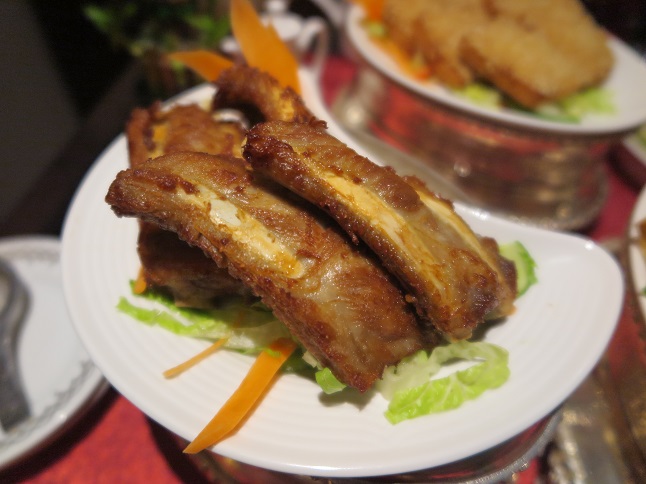 <BBQ Pork Ribs>
While there are less than five fingers count of Chinese restaurants in Dubai that has a pork kitchen that serves non-halal food especially with a variety of pork dishes, The Peacock Chinese Restaurant BBQ Pork Ribs doesn’t disappoint. The chunky meat was cooked to perfection, meaty and flavorsome and needs no dipping sauce but to enjoy the taste from its well marinated meat. 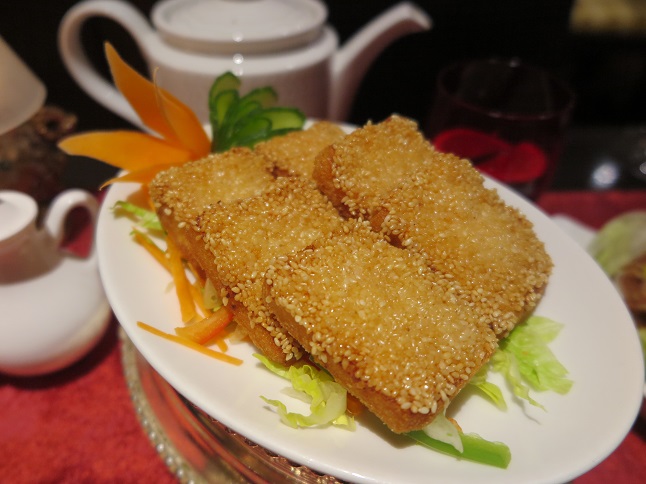 <Deep Fried Prawn Toasts>
Six pieces of well sliced and small toasts fully layered with prawn paste and topped with sesame that was deep fried to its crispiness. Slightly on the oily side yet quite delicious and worth ordering. 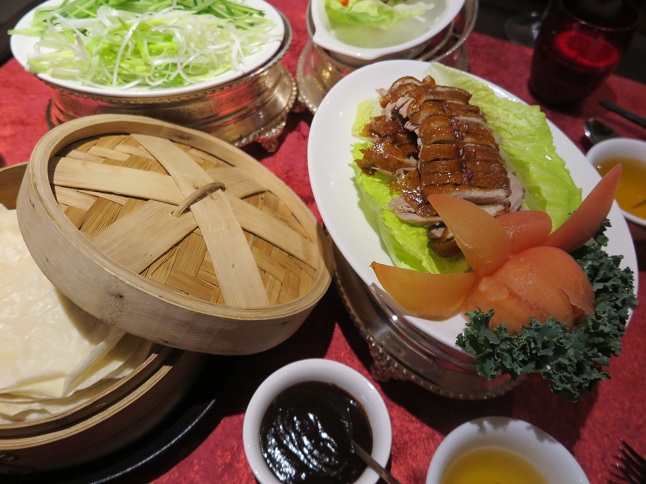 <Half BBQ Peking Duck>
Since Chef Xiao Jun originated from Beijing, hence a Peking duck dish is a must order and for us to see what kind of version or secret recipe that he would deliver to his diner of this national dish. The meat was dry and in quite small portion and was not being sliced instead of chopped into pieces. None of the skin was orderly sliced either, not to say it was not crispy but soggy – it was deep fried instead of being roasted as we suspected. This is always a challenging dish to get it right as most diners have a high expectation and anticipation for Peking duck. When a kitchen is not well equipped to have a special roast oven in order to get this right, would you like to have a pan-fried pizza instead of an oven roasted pizza? Same theory applies. The accompanying pancakes were another disgrace where most of them were broken into half or few pieces and made it not possible to roll and half of them laid in the basket not in a complete round shape and below lukewarm temperature. A total let down! 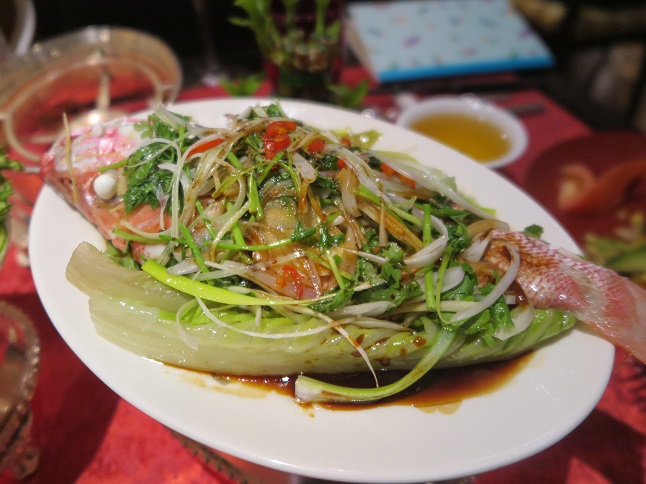 <Steamed Whole Fish from the Coast with chilli, spring onion and soy>
Red snapper was presented as ‘fish of the day” not overly cooked and steamed to the right temperature served with chili, spring onion and Chinese parsley that gave a bit of tart counterpoint to the premium soy sauce and overheated oil poured onto the fish. A true Cantonese style of cooking to steamed fish dish. 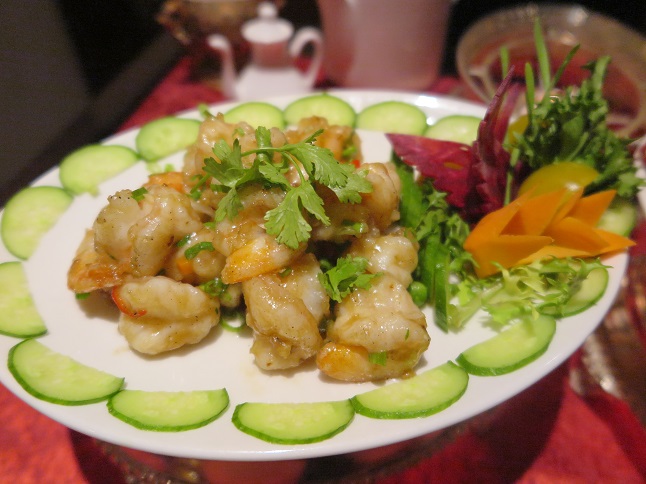 <Sauteed Prawns with soy, spring onions, ginger and hot garlic>
One of the many delicate dishes from the menu that is worth ordering for its freshest taste and delicious flavor, the prawns were springy and not overly cooked and enhanced by the light soy sauce which was well executed. 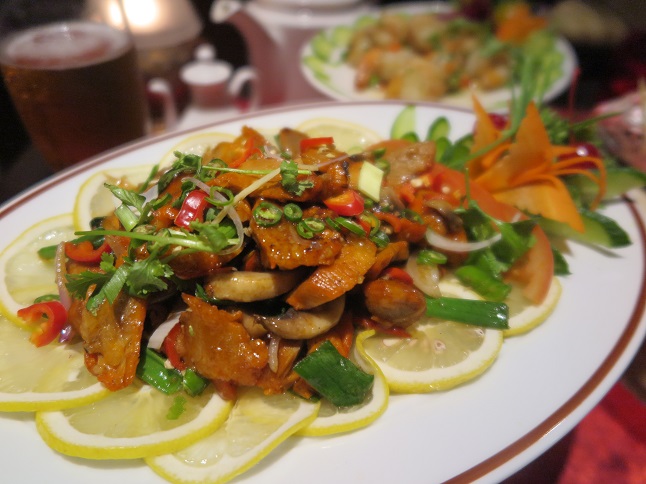 <BBQ Pork with garlic and green chili>
The pork meat was tasty but rather old and too lean for such stir-fried combination as the fats from the meat are the soul and spirit to highlight the flavor of this dish. The supposed reddish coloring marinades turned orangy and not as authentic in flavor as we expected. 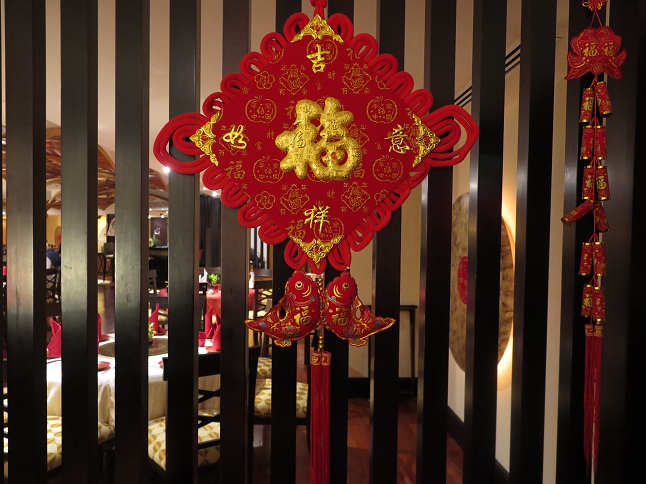 The overall taste and authenticity from the menu did not bring out the best from the cooking, but credit still has to be given to the culinary team trying to bring the closest taste of origin as they can from the limited ingredients supplied in Dubai and also the know-how to get it right and excel with its authenticity. But one has to be circumspect in knowing that the chef is appealing to many different palates. The service team is very warm and welcoming and prompt in serving. Bernadette’s shining hospitality is particularly a standout with her cheery, helpful approach and was spot on with managing our table requests. 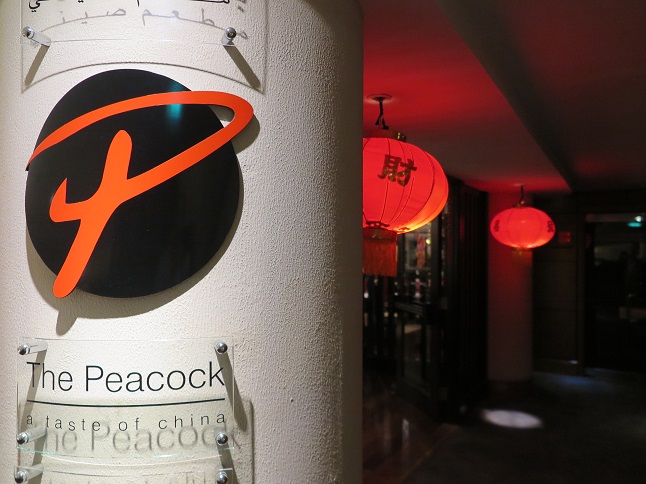 The food was overall well cooked and while not everything was authentic with a few hits-and-misses, it is always a matter of personal taste. The overly decorated vegetable garnish plated with each dish was not really necessary, as the menu items described are what counts in Chinese cooking. The extensive menu has so much more options to try on our next visit and there is certainly a deft hand in the kitchen in areas where other Chinese kitchens fail, so some dishes were beyond our expectations, which is always an experience you want to have. When you are craving something and looking for a change for Chinese food, finding a “Taste of China” – in general and more than just a glimpse, you may find what you want here.