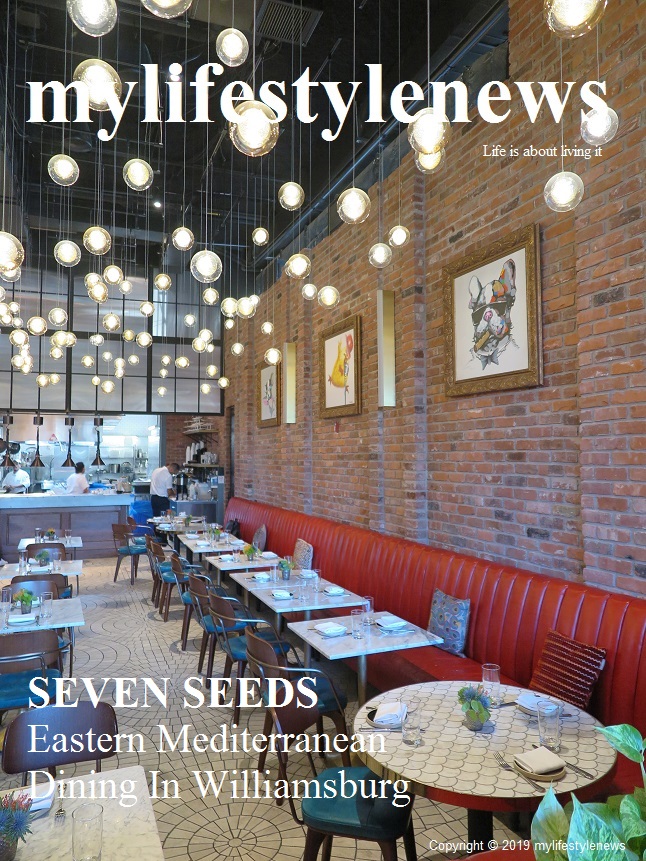 Dining in Manhattan can be an exciting prospect but when the city is congested with overcrowded tourists especially in summer, exploring neighborhood dining across other boroughs such as Williamsburg may not be a bad idea as the edgy hood is a constant battle with mainstream culture to dine in some of Brooklyn’s best eats and the area works hard to maintain its indie feel. mylifestylenews writes. 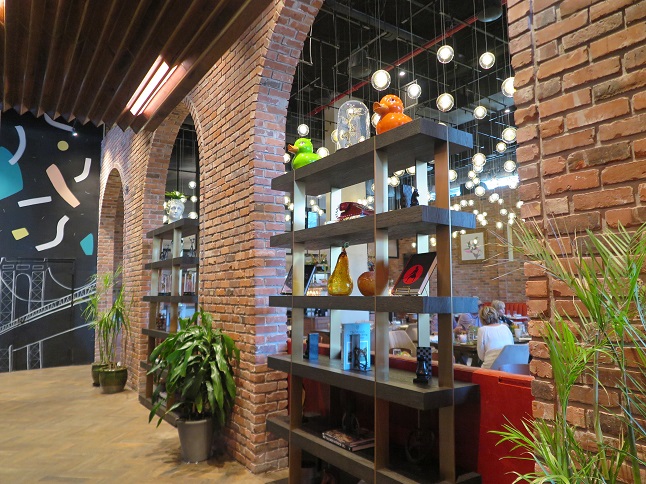 Brooklyn for some New Yorkers is out of their comfort zone. While Little Italy in downtown Manhattan had already branched out to Queens and a new China Town became an add-on in Bronx, Williamsburg is another gentrified neighborhood that has been garnering a lot of buzz lately and straddles old and new with lively arts, music, trendy cafes, bars and restaurants, chic designs stores and boutique hotels which have revitalized the sleepy old industrial area with vibrant soul yet some things in this hipster-hood remain timeless. 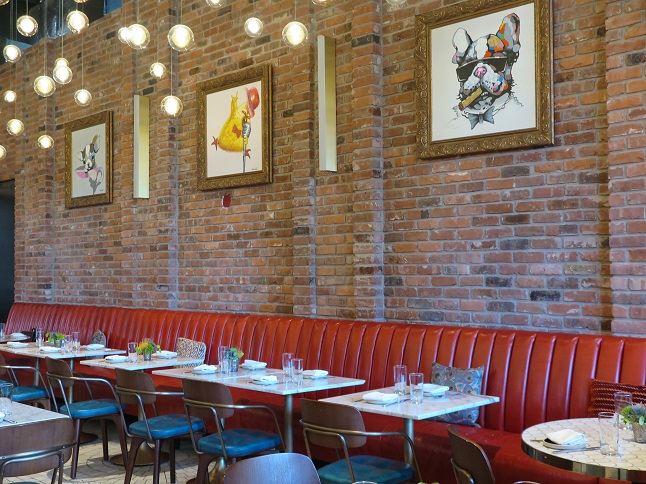 With just three Subway stops on the L train over to Manhattan Union Square Station from Bedford Avenue where the heart of Williamsburg is, you will be spoilt by choice to drink up and chow down in this hippy neighborhood. The latest transformation of Seven Seeds in The Williamsburg hotel is now helmed by a passionate Lebanese American female Chef, Melissa O’Donnell with a brand new designed and crafted Eastern Mediterranean menu based on all the spices frequently used from her homeland with Arabic and Oriental influence that is almost to none and a new dining adventure in the suburb. 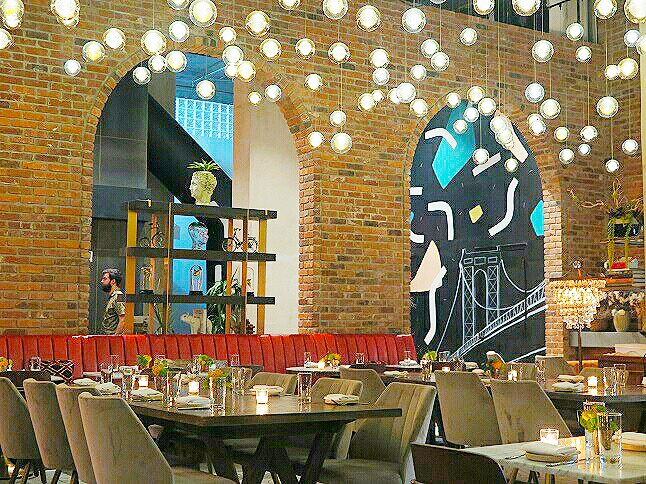 Seven Seeds has a prime location in north Williamsburg, taking up a sizeable chunk of the lobby and is all things for food & beverage in this hotel. The interior design is certainly eye-catching, with a sea of suspended lights hovering over a chic dining room, composed of an eclectic mix of modern and rustic furniture that brightened up the entire ambience. 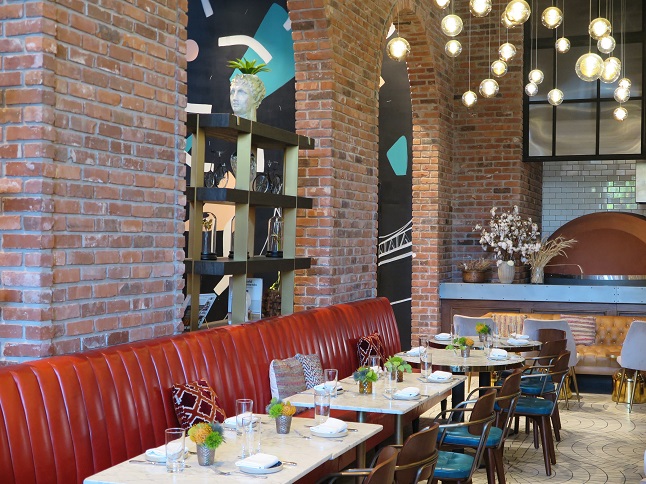 Being an old industry warehouse and with the benefits of double-height ceilings before being turned into one of the most talked about hotels in Williamsburg, there are still internal arches of exposed brick framing the dining room. Red leather banquettes, brass and leather chairs and a mix of marble top and wooden dining tables create a great vibe that would invite you to stay awhile. Lighting is a key part of setting a very sexy ambience with an open kitchen to give a lot of openness which flows into the bar, which in itself is like a brass ship in the middle of the main lobby area – some wonderful design elements that are too many to describe, but not over-done. 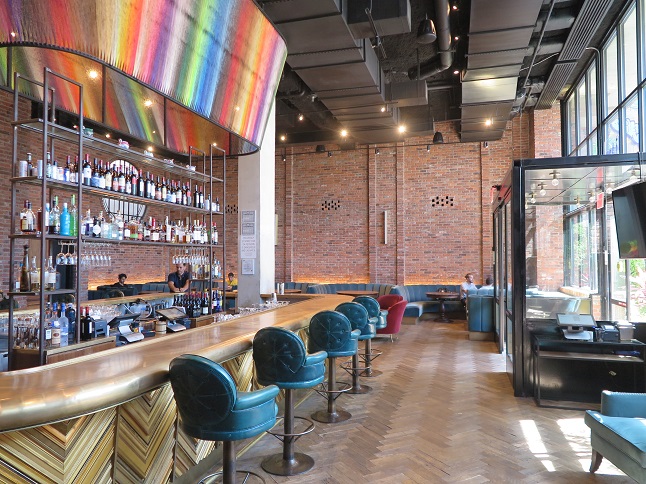 As is the case in a lot of hotels, it is a fine line convincing your guests to stay and dine in with so many chic establishments outside, so Seven Seeds was exceptionally quiet, plus it was a weekday, the ambience was not at the optimum. When the bar is busy, the whole lobby area has a buzz, so it has potential. From the typical Orient dips to Hot and cold Mezze, Hummus, Smoked Eggplants Babaganoush, Labneh, Quinoa Kibbeh Naya, Duck Fat Fried Potato Wedges, Lebanese Spiced Confit Duck Wings are the common hits on the list. The breads are made in their Brooklyn Bread Lab in Bushwick, NY that boasts the largest stone mill in the Northwest. 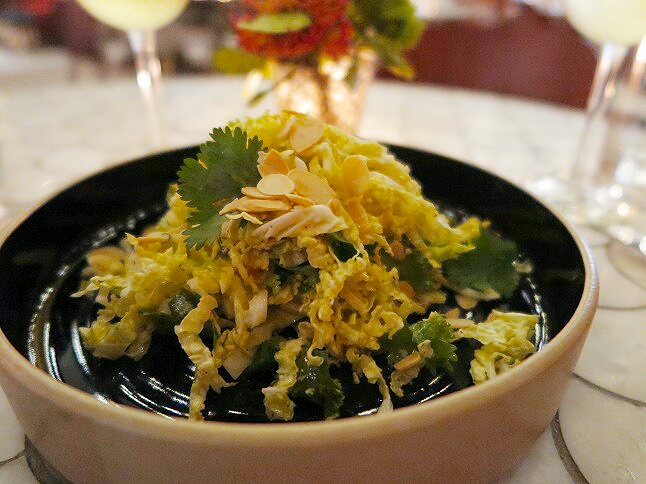 <Shaved Nappa Cabbage> - Pecorino, Cilantro & Almond
A surprise and refreshing start to the evening with a sharp zestiness palate, thanks to tangy lemon juice which is offset by the Pecorino cheese. A well-crafted cold mezza from the menu. Love it! 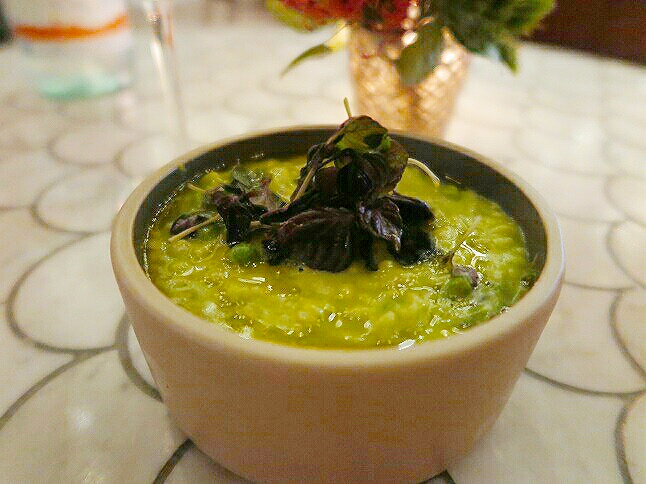 <Asparagus & English Pea Risotto> - Grana Padano
A classically prepared dish with all the ingredients harmonized. Rich and thick risotto cooked with a generous amount of diced crunchy asparagus and fat round peas gave some texture on palate. Portion is reasonably big and filling for a hot mezza as the risotto served in a deep small bowl is deceiving. 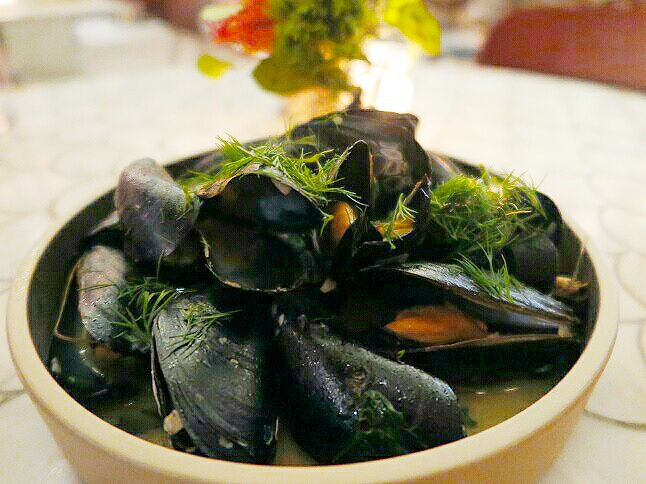 <Hollander Mussels in Massaya Arak> - Dill & Cilantro
The mussel was fresh, firm and meaty, but not so sure about the pungent alcohol content from the Massaya Arak sauce which was overpowering the entire palate. The soul of any mussel dish being served is always championed by its sauce but this dish did not bring out the best from the Hollander Mussels. 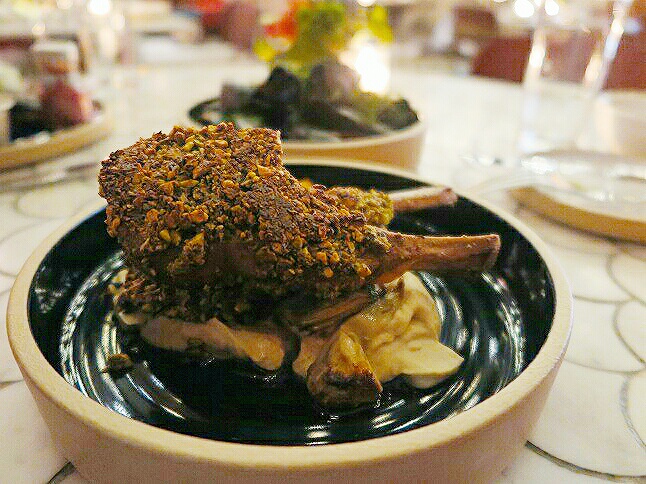 <Dukkah Rack of Lamb> - Artichoke Fricasee & Puree
The rack of lamb was beautifully cooked and the Dukkah crust added an exotic touch. The artichoke fricassee in thick white sauce is the perfect foil for the richness and a compliment to the lamb. 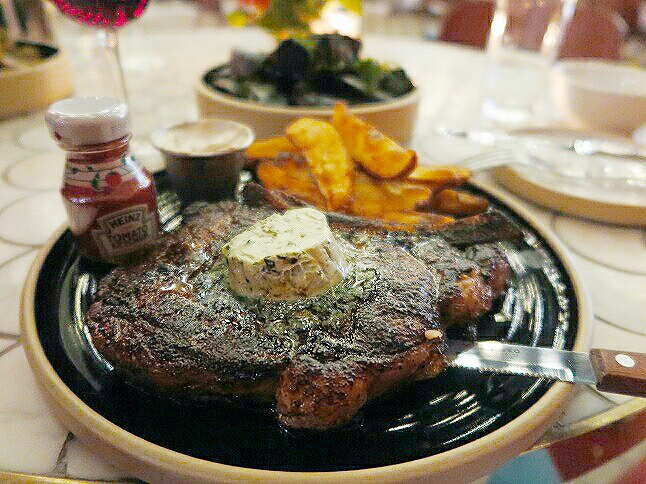 <16oz Prime Bone-In Rib Eye Steak> Coffee-Aleppo Crust & Herbed Butter
The steak was perfectly cooked and very tender, but may be a little too ambitious from the combination of the ingredients used as the coffee crust may not be to everyone’s taste, being a little too sweet as the meat was overshadowed by the coffee flavor and the accompanying duck-fat fries were also not that crispy and in lukewarm temperature which was quite a let down. 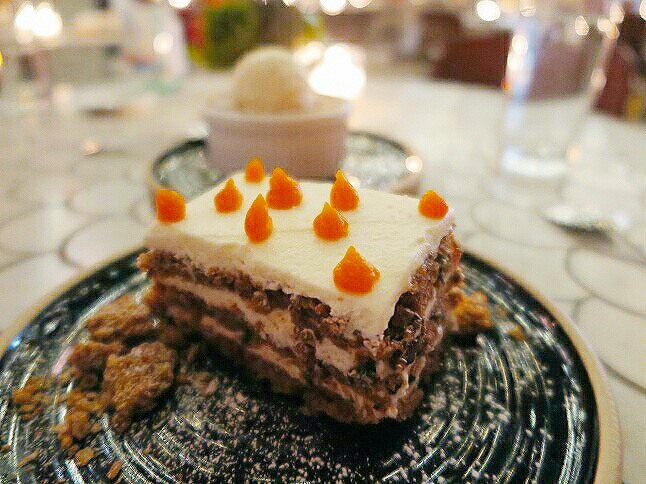 <Mikey’s Carrot Cake>
The layer of the cake was not as firm as a good carrot cake could get and the carrot gel and granola dust also did not give any compliment to elevate the taste or give any excitement on the palate. 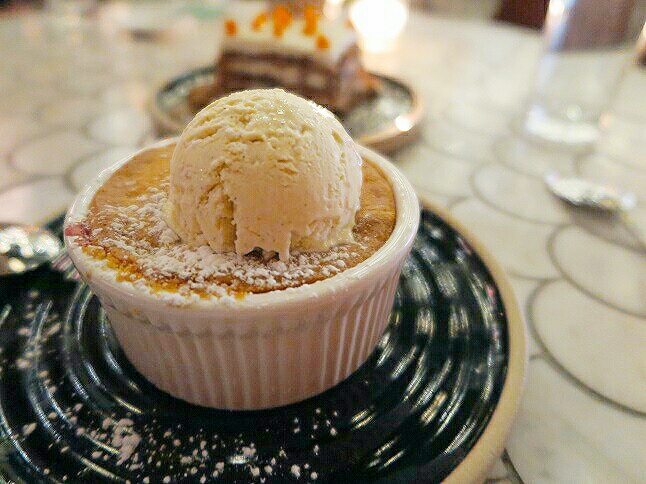 <Stone Fruit Cobbler>
The Stone Fruit Cobbler is quite a rich combination from the ingredient used for this dessert. Similar to a good fruit tart, peaches, raw honey, apricot, vanilla ice cream rounded up the evening with a delightful smile. 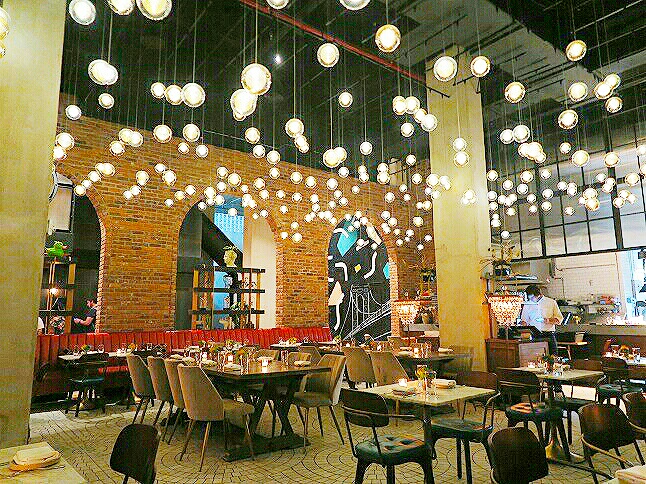 When comes to its service, the front of house team were quite warm and friendly. We were recommended some interesting wines by the glass to pair with our food, which worked extremely successfully. However, there were a few things that we felt needed work. The sequence was not right, serving the mussels along with the mains only rush you in to finish as each dish does has its own particular flavours to get sampled. We admired Chef O’Donnell's creativity by bringing the new dining adventure to the neighborhood by using spices in an inventive way, but some of the dishes did not resonate with us. While Williamsburg has become one of the newest culinary destinations in New York City, Seven Seeds has its potential by delivering a Middle Eastern twist from its menu and is definitely worth exploring especially when you are looking for a neighborhood option outside of Manhattan. 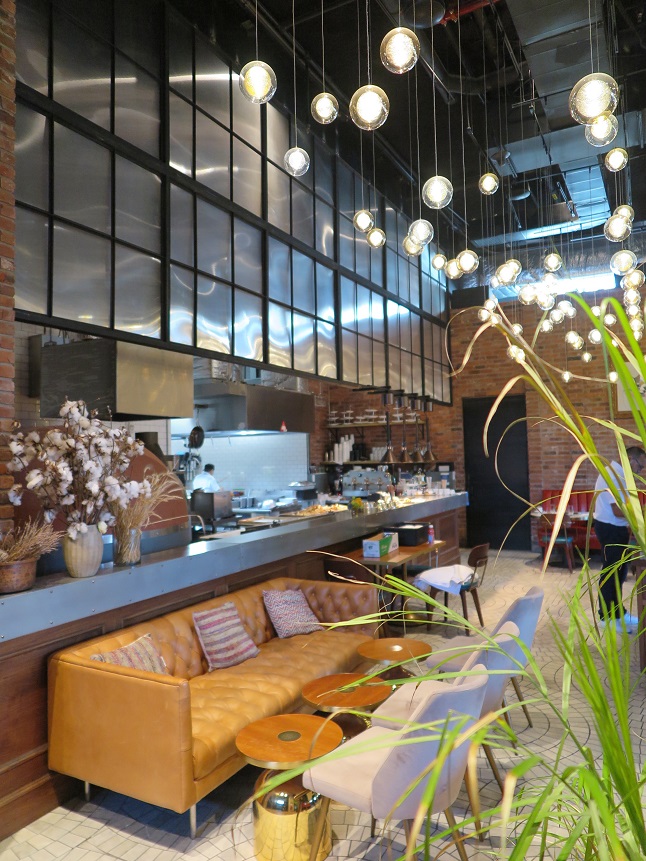