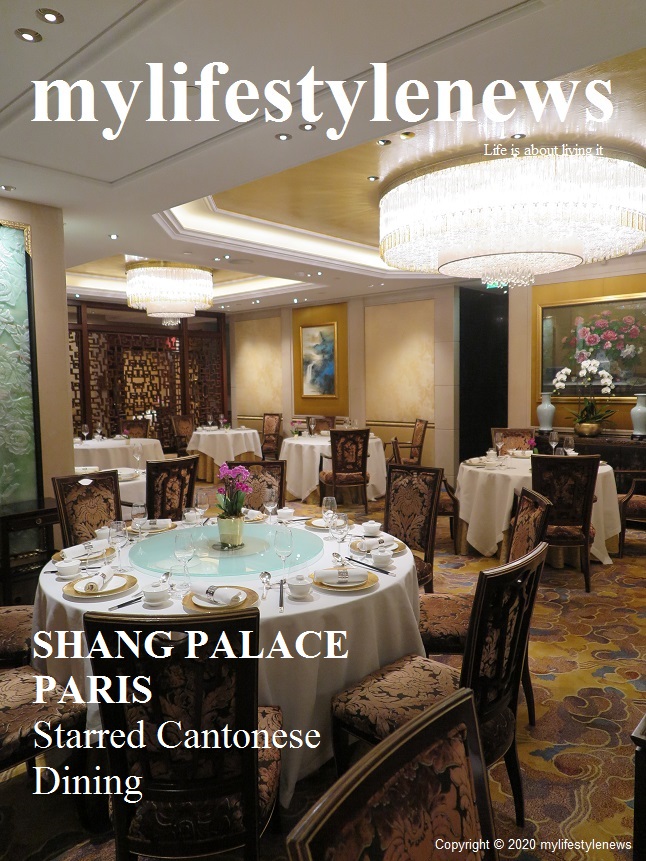 When you crave for authentic Cantonese food in Paris and wish to go for an up market dining experience, there aren’t too many options to choose from, Shang Palace at the Shangri-La Paris may well be the authentic choice to satisfy your demanding palate. mylifestylenews writes. 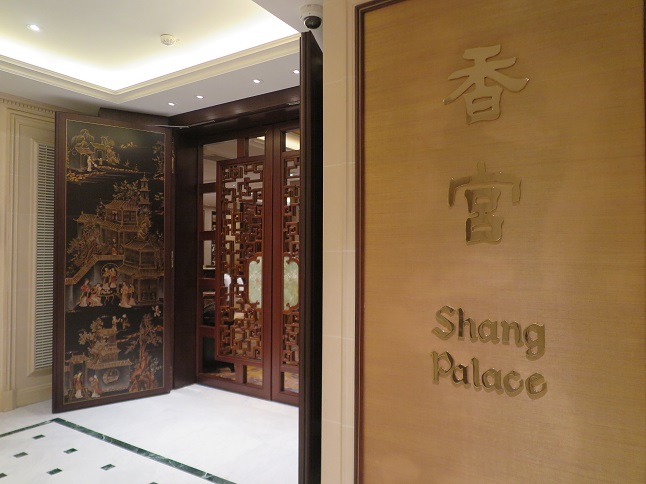 Specializing in the preparation and presentation of the most sophisticated Cantonese cuisine known worldwide and done with skill and grace, Shang Palace at Shangri-La Hotel Paris, the one and only one Michelin-starred Chinese restaurant is nearly flawless. <Xiang Gong> makes up the name Shang Palace in Chinese characters and also means “aromatic scent” and “haven for royalty”. Shang Palace at Shangri-La Hotel Paris is the first in Europe and offers authentic Chinese food inspired by the cuisine of two regions in South East China (Canton and Huaiyang) while the restaurant brand is all about authenticity in flavours, hospitality and immaculate service is another powerful thing that won them much recognition. With the evocation of a touch of the orchid floral arrangements and set on a plush carpet with subtle and auspicious Chinese style motifs, all of which creates a luxurious and sophisticated dining ambience yet alleviated with friendly and unpretentious comfort together with a subdued soundtrack of traditional Chinese music in the background, you are set for a grand experience. 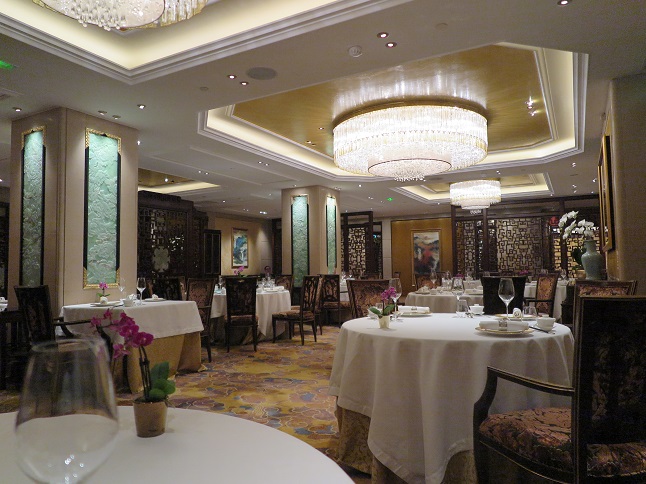 Walking into any luxury ‘palace’ hotel in Paris is a sight to behold and the lobby is where the anticipation begins. Shang Palace at Shangri-La Hotel Paris has a classic ambience that is consistent with all of the Shangri-La’s around the world. Entering the restaurant by passing through a crafted high wooden Chinese motif see through screens adorned with two giant Chinoiserie doors on the well polished white marble floors, the contemporary Asian main dining room is divided up into semi-private spaces with backlit jade columns with inlay of jade panels representing peony flowers separating some of the tables settings, spaced far apart from each table for the luxury of space, contrasting the ubiquitous crystal chandeliers reflecting in the rich gold ceiling treatment. 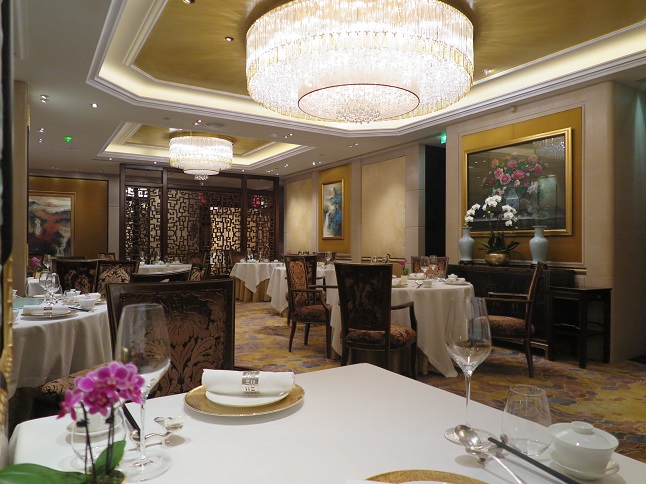 Helmed by the young and talented Executive Chef Samuel Lee who joined the team in March, 2015, originally from Hong Kong and having worked in various gourmand cities in China, Chef Lee strives to excite your palate while generously sharing his most authentic flavours of his gastronomy. Shang Palace at Shangri-La Hotel Paris is not only dedicated exclusively to Cantonese style Chinese cuisine, but  now with an extra add-on to Sichuan delight by his starred kitchen. While Cantonese cuisine is considered as one of the most refined cuisines in the world, Chef Lee brought Cantonese and Huiyang regions’ best secret recipes to his diners’ table with subtleties of traditional yet elevated Chinese flavours. 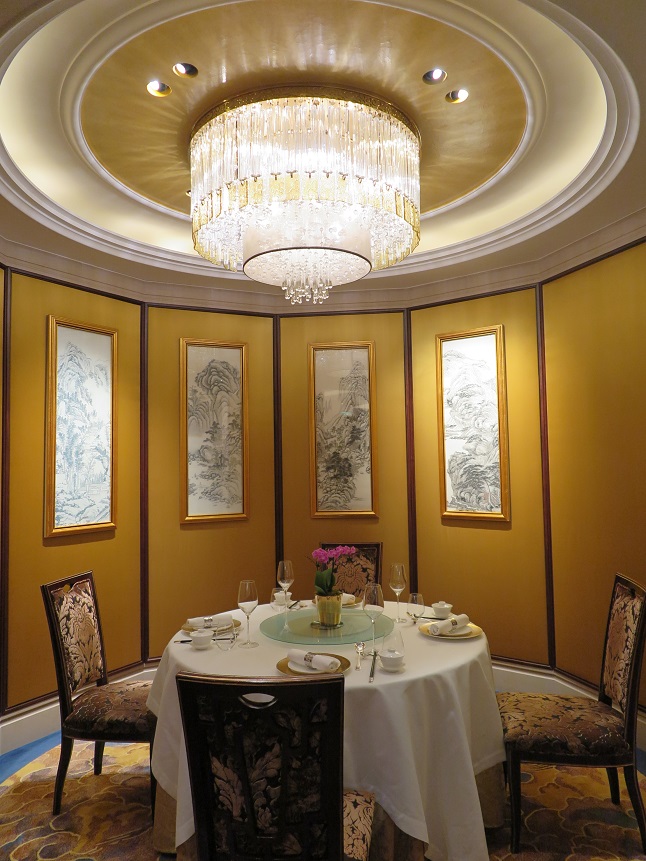 Cantonese cuisine is presented in a family style manner with dishes served at the center of the table for everyone to share. Sharing is caring, it is also current that some are savoured with fingers for that licking good effect and not wasting any drops of the palatable flavours from every dish presented. It all begins with appetizers, which this evening was black fungus marinated in rice wine with sour plum sauce on slices of cucumber and carrot to pique the taste buds. Ludicrous for your health but so charming and delicious….and you only live once! 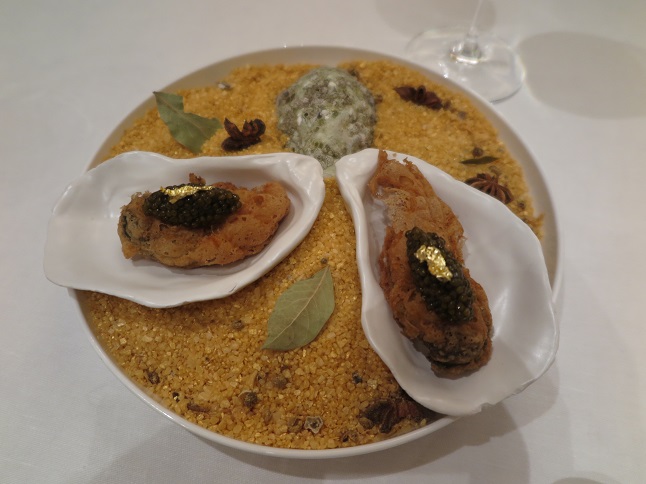 <Deep Fried Gillardeau No.2 Oyster Topped with Caviar>
We kicked off the evening by selecting one dish from the Chef’s recommendation menu. The Gillardeau No.2 Oyster was deep-fried to a light and fluffy texture without any trace of excess oil which required an eminent skill to achieve that, yet remain juicy inside. The oyster was further elevated with a topping of caviar and gold leafs, carefully placed on a round white plate with the shell and a bed of refined rocks reminiscent of the beach by the sea, garnished with condiments and spices such as bay leaf and star anise. A beautifully executed dish and it was unexpectedly exquisite with a memorable texture and taste of the oyster. 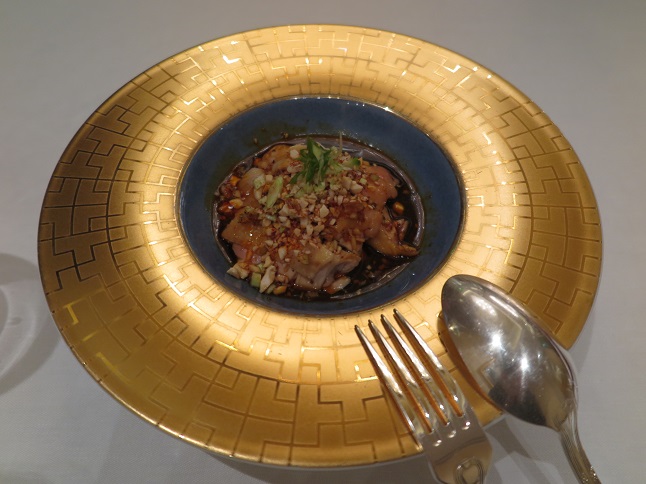 <Marinated Organic Chicken with Chili Oil, Peanuts, Spring Onion & Sichuan Pepper>
Another Sichuan appetizer we sampled. Chef Lee may have reserved his benefit of doubt by using or playing around with his Sichuan pepper daringly, at least to numb your lips to begin with. Be it too modest or considering how spicy can the French take in, it was still lacking of soulful palate from the Sichuan pepper spice to make you ‘salivate’. A well hit-and-miss dish! 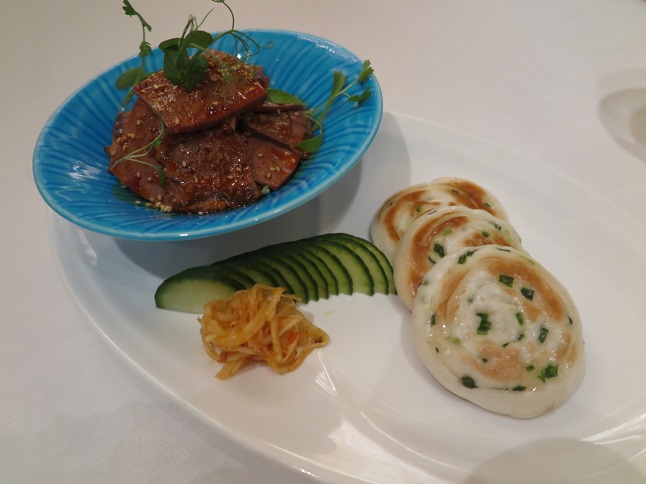 <Marinated Beef Shank with Leek Pancakes>
This popular Sichuan appetizer served cold or at room temperature was given a twist by Chef Lee. Despite only beef shank and tongue being used instead of the original version where thinly sliced beef and beef offal reminiscent of an “inseparable couple” hence the name fuqi feipian was named after. Common ingredients in the modern version include heart, tongue and tripe, and a generous amount of various spices, including the soul ingredient – Sichuan pepper.  This was a dish that resonated with very tender brisket accompanied by sliced cucumber to cleanse the palate as well as spicy radish on the side and finished with leek pancake which was quite enjoyable. 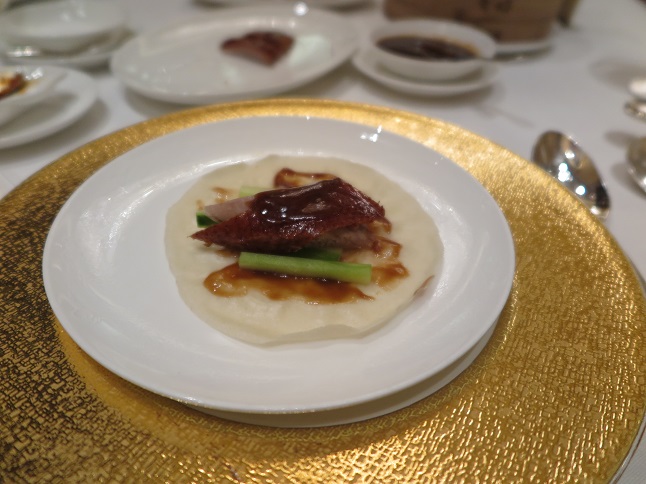 <Roasted Whole Beijing Duck>
Another Chef’s recommendation dish on the menu and quite irresistible to avoid for not ordering it! This was Chef Lee’s French version of glazed Beijing Duck, as the bird was too skinny and in the Chinese opinion, lacking flesh. The duck is from Ireland as we were reliably informed by Chef Lee when he came out from his busy kitchen for a small chat and he commented that French ducks are too fat for a Beijing Duck dish (just goes to show how Chinese can differ on opinions of food)!  It was sliced according to the veins that won’t destroy or ruin the palate and plated with expertise and with passion on guéridon service by a Frenchman no less, so knowledge is transferred from one culture to another and yes it was delectable with the homemade bean sauce and julienne spring onions and cucumbers. 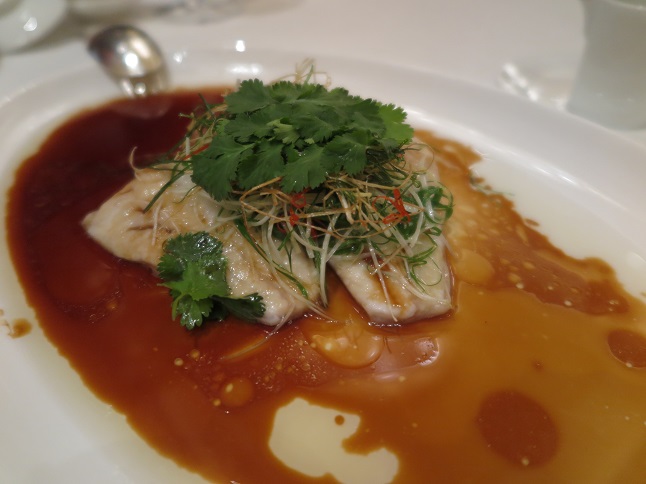 <Wild Turbot Steamed with Ginger & Spring Onion>
Presentation was a little under whelming, with soy sauce spilled all over the plate and we were expecting a whole fish (head & tail included) steamed but it was filleted into two small slices. The wild turbot was not overly cooked which was a good thing for any steam fish by enjoying its delicate flesh. An authentic way of serving Cantonese steamed fish is best accompanied by a quaint touch of soy sauce and splashed with a big spoon full of boiling hot oil over the fish with refined julienned ginger and spring onion -  a signature component of this dish. A tasty dish nonetheless. 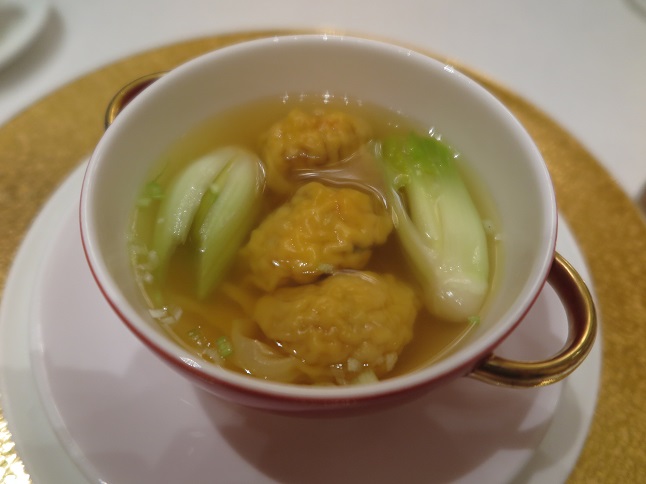 <Wanton Soup>
Superior presentation but the taste is a total let down especially coming from a refined Cantonese restaurant. Despite that the soup was prepared in a traditional Cantonese broth as described on the menu, it was too bland, almost tasteless and just seemed to be lacking something. It was even being empowered by the vegetable that was poached in the broth with the three pieces of firm rather than tender shrimp, pork and black mushroom fillings for the wanton dumplings. 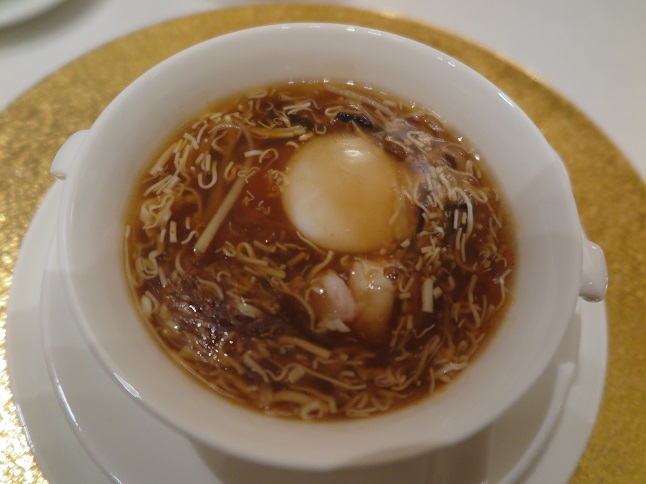 <Cantonese Hot & Sour Seafood Soup>
Do not expect the taste from your regular Sichuan version of hot and sour soup with the real yin and yang as well as the kick from its Sichuan pepper used as Chef Lee’s Cantonese version is less complex in taste, mild and yet with more harmony and redolent on palate. The tofu was delicately sliced to create that ‘wow’ effect on being presented at the table. 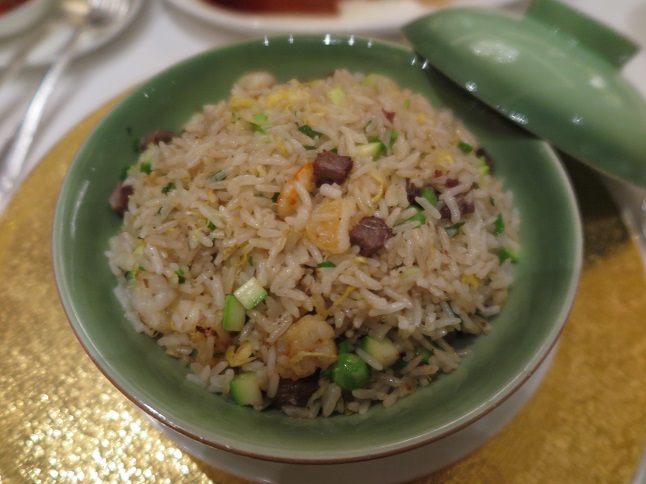 <Shang Palace Fried Rice>
Back to the basics and the basic turned out to be one of the best dishes for our evening. The signature Shang Palace Fried Rice with barbecued pork, eggs, shrimps, spring onion and vegetables was absolutely perfect in many ways. The rice was stir-fried to a dry and yet wok-y (from the absolutely high heat in short amount of time with the talented well-trained skill) texture. Well-balanced in taste and with an additional dash of soy sauce from the steam fish, the dish tasted complete and was a hit. 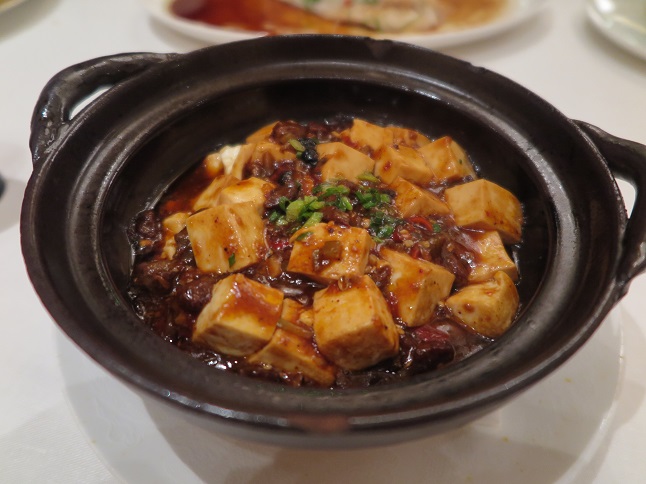 <Mapo Tofu>
A classic Sichuan braised tofu dish with minced meat (mainly pork is used). A genuine comfort food for its nation which is complex in taste from the amount of chili and pepper used to stir up the spicy level. It is a popular dish that is ideal by rounding up with a big bowl of steamed jasmine rice. Yet, once again Chef Lee’s hesitation of pepper ingredients used did not achieve the desired effect on our palate to make this a star dish for the restaurant. 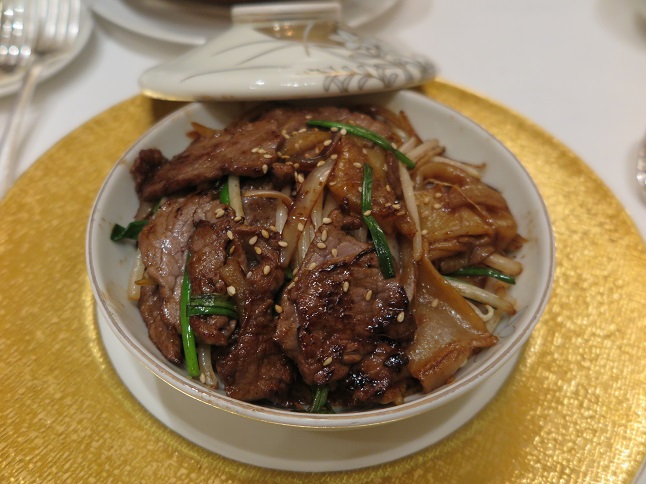 <Wok-fried Homemade Rice Noodles with Sliced Organic Black Angus Beef in Superior Soy Sauce>
Absolute perfection personified with every ingredient and piquancy on the palate. The noodle is handmade by the culinary team – hand pulled every morning to get the right texture and size. This wok-fried noodle dish in high heat may seem easy but it takes years to master. An absolute spot on in every way, in particular the organic Black Angus beef with Chef Lee Sum’s secret homemade sauce are the heart of the menu pleaser, taking centre stage and is an utterly compelling dish. It is one of the best wok-fried beef noodles we have had in years. Bravo for the team’s effort and passion and it should be boxed in the chef recommendation category. A must-order! 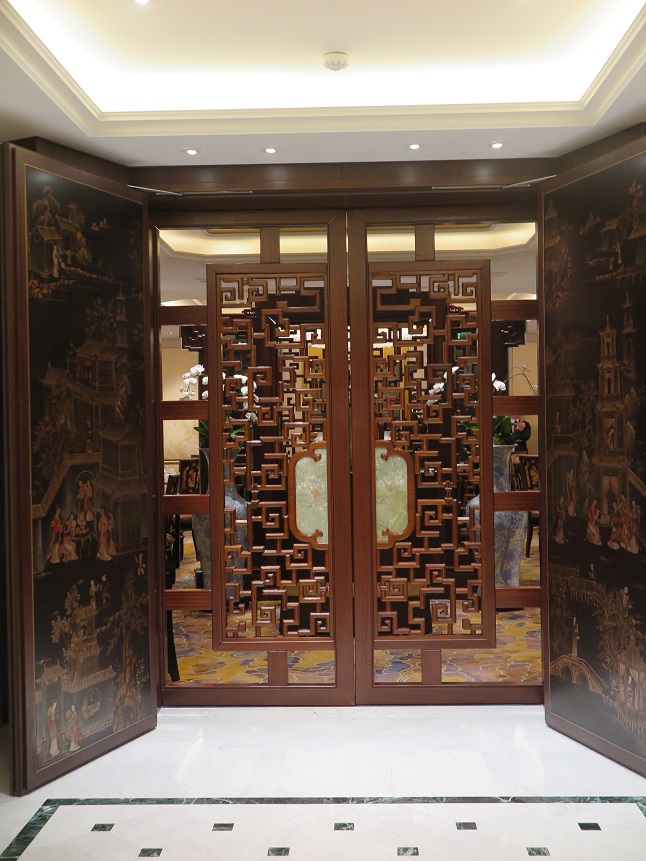 Taste is a personal thing and despite some dishes had been altered for European palates, yet refined ingredients are used with some specific choices to get to the heart of authentic Chinese (Cantonese & Sichuan) flavours and texture with the dishes that we sampled. This is achieved on many fronts and although not meeting our high expectations from its starred recognition in every dish, the evening was a huge success. The highlight was the signature Shang Palace Fried Rice and the Wok-fried Black Angus Beef Noodle that would do any Chinese restaurant proud in any location around the world. The service was impeccable and product knowledge was not to be questioned and was consistent with every member of the F&B team. The supervisor Geoffroy was our table host for the evening and he was a delight with his warm character and his know-how was spot on with every detail and service sequence as well as his team-mate monsieur Henry looking after us in perfect manner and attitude. All in all, it rounds up our Paris dining sojourn with great expectation and memories. Totally worth a visit at Shang Palace at Shangri-La Paris when you are in Paris next to enjoy a heightened Chinese food experience and you will be delighted with what they have to offer, with the right pick from the menu.