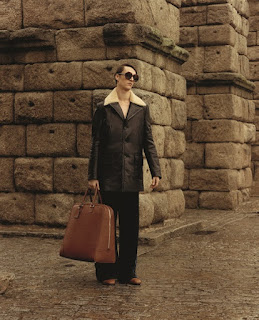 The first images from the campaign unveiled on kiosk across Paris that includes bold silhouettes showcasing LOEWE's FW2015 Menswear collection styled by Benjamin Bruno and photographed by Steven Meisel.

anchoring the campaign, a series of 'Self-Portraits"- undated images from Steven Meisel's personal archives re-photographed by the photographer himself especially for LOEWE - manifests Anderson's desire to activate diverse visual documents in a way that reflects his multi-faceted direction of the house.

The previously unreleased images pay tribute to Meisel's roles as an indispensable inspiration when Anderson was called upon to rebuild LOEWE, while indirectly highlighting the evolution of self-portraiture from a classical art convention to the more disposable modes of self-representation now prevalent.

By embedding the archival shots, exclusively released by Meisel, the personal history of a photographer inextricably linked the house and instrumental in shaping contemporary fashion we know it, is interwoven into the landscape of LOEWE, becoming one of the many threads that inform the brand today.

Descriptive shots of key pieces from LOEWE's current collections, including the desirable X-cross travel series now in stores, form the campaign's third and final component, photographed by Damien Ropero. With its liberally juxtaposed elements, the new campaign exemplifies the way in which,m hm at LOEWE influences and ideas co-exist as part of one creative universe, connection past and present to crate a template for future.