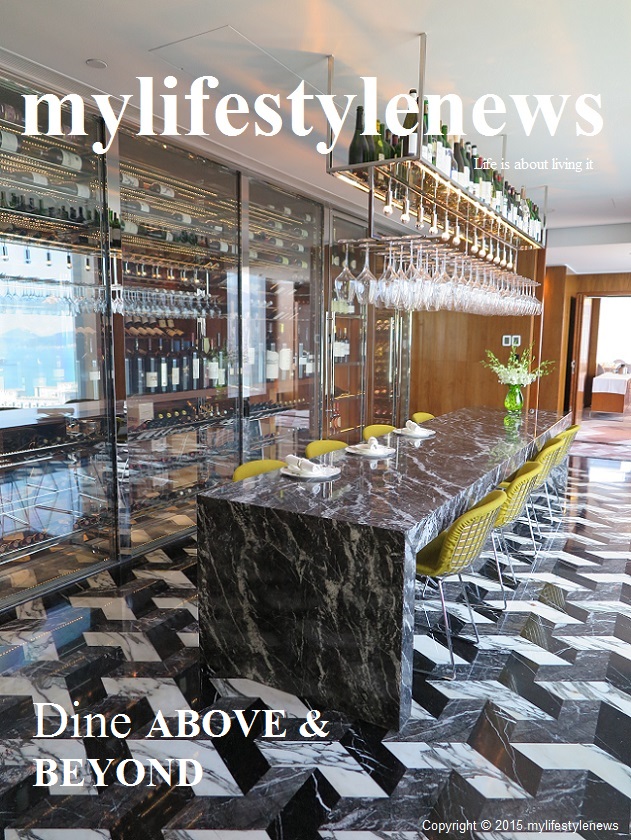 Hong Kong has a plethora of restaurants on the top floors dining, thanks to the magnificent Victoria Harbour view that you won’t get tired of. mylifestyelnews went ABOVE & BEYOND to explores their latest Cantonese weekend lunch menu pairing with some surprising new world wines produced in China…… 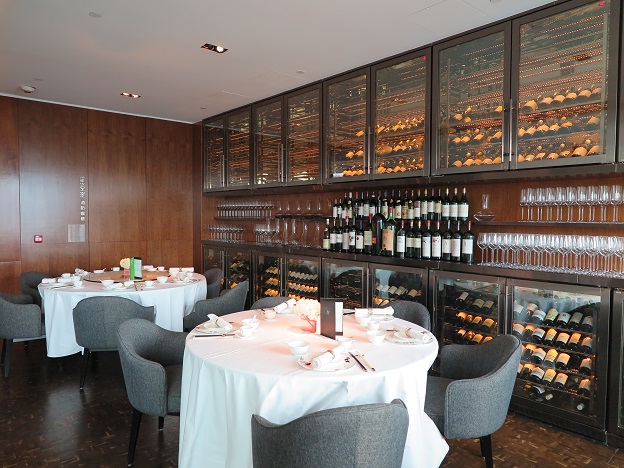 ABOVE & BEYOND is a nouveau Cantonese restaurant that sits on the 28th floor of the Icon Hotel in east Tsim Sha Tsui, Kowloon that is absolutely worth exploring. As we are quite familiar with Cantonese cuisine, we asked the chef to surprise us with an eight course tasting menu. 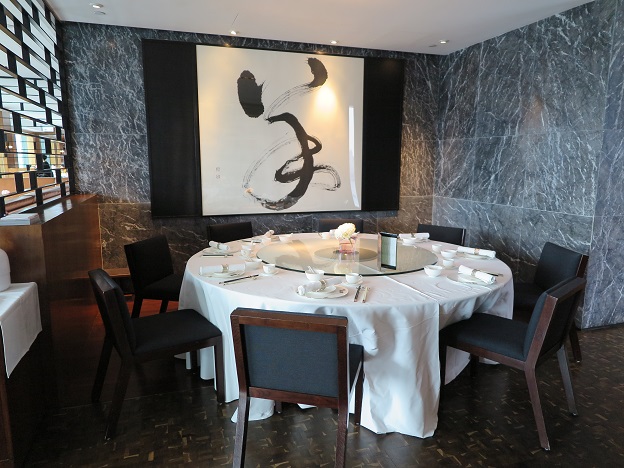 It may sound like a Chinese Banquet meals which is quite typical for Cantonese cuisine when you dine out, unlike ABOVE & BEYOND, the portions are more favorable to degustation menu size with a well balance selection with three seafood dishes, three meats dishes, one vegetable dish and one dessert du jour. 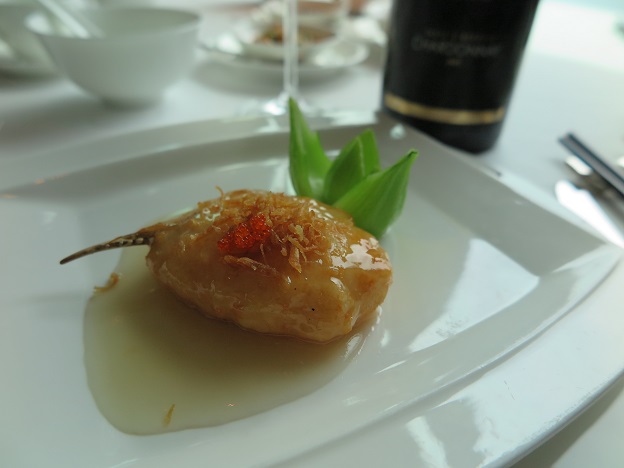 To begin, it was the <Crispy Crab Claw with Shrimp Mousse> with a Chinese Bak Choy’s heart on the side. Minimalist garnish makes a beautiful presentation with plump and juicy meat that was not overly strong in flavor, a good savory to begin the meal. The glutinous sauce added to the overall balance and juxtaposition of rich meat with the Bak Choy provided a hint of sweetness. 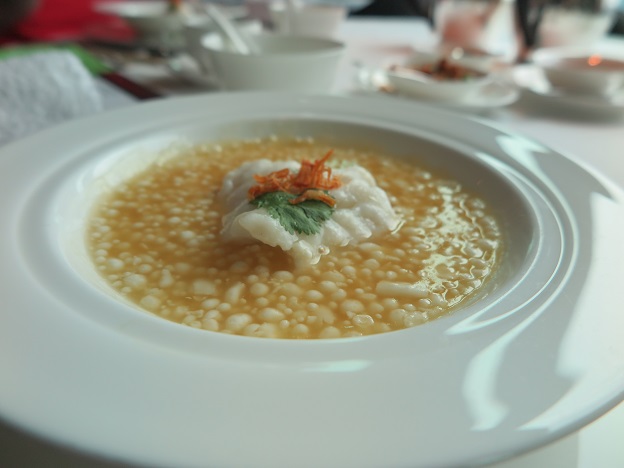 <Steamed Garoupa Fillet with Egg White and Yellow Broth> was the next course and it looked as delightful as it was. Simply mouth-watering! The tender Garoupa fillet falling apart with the touch of a knife and the egg white in the yellow broth was an added bonus as this required some special skills in order to allow the egg white not being overly cooked while not empowering the taste of the delicate yellow broth made from some secret recipe. This dish is such a delicacy. 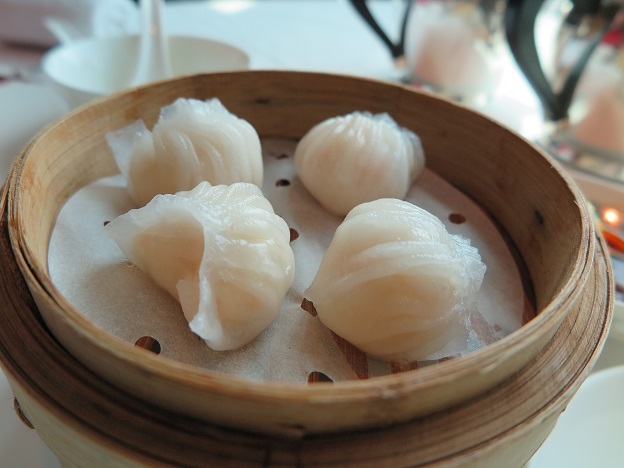 We decided to intersperse the set menu with some dim sum and some other classic choices to see how the kitchen handles the comfort food side of the menu. The <Har Gau> Steam Shrimp Dumpling was very well done, with sizable prawns and a little juice within a thin casing made it just right for the exquisite Cantonese style dim sum. 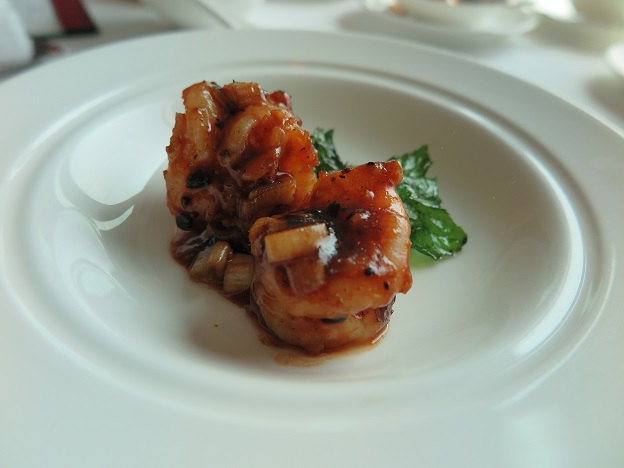 Another seafood dish was <Wok-Fried Prawns with Tangerine Peel and Luoding Fermented Soy Bean>. The presentation alone created a big expectation and it did not fail to deliver. The prawns were fresh, big and juicy and the combination of elements gave it a real depth of flavor. Another stunning dish that had us waiting with further anticipation. 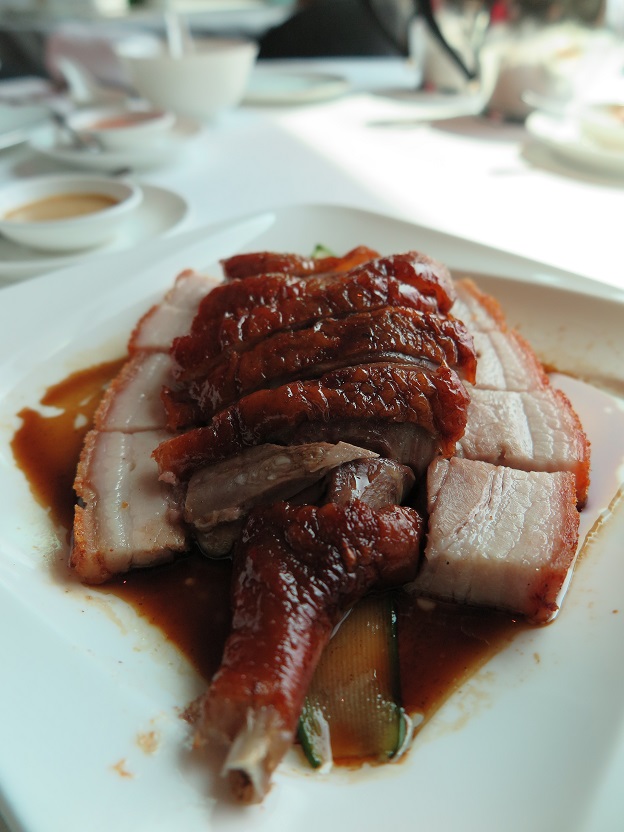 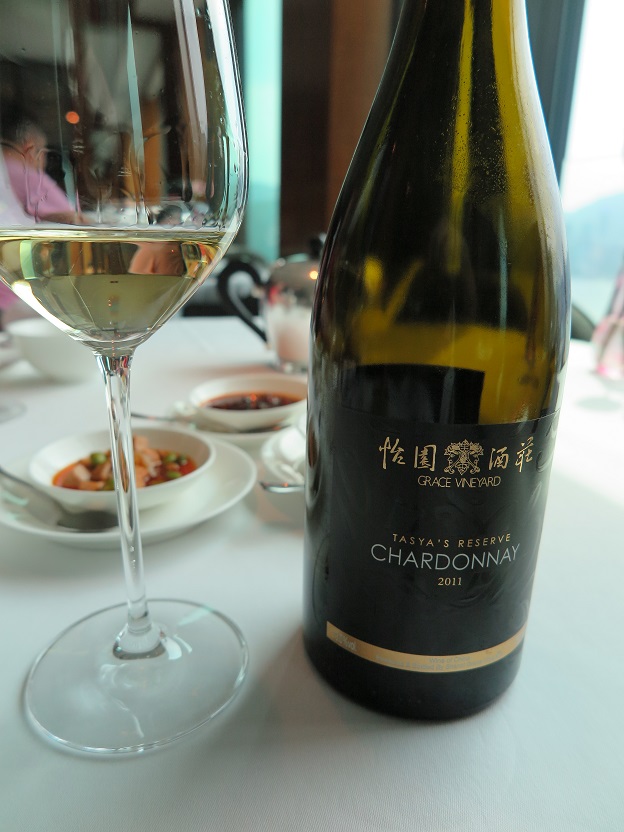 We threw caution to the wind and go with wine pairings to see how they would match the food flavours and the sommelier was spot on. We were quite skeptical when Chinese white and red wines was on the pairing. Grace vineyard’s production could change your perception of Chinese wine production. We were being misled by the Great Wall’s production for quite a while until some real delicate production was introduced. 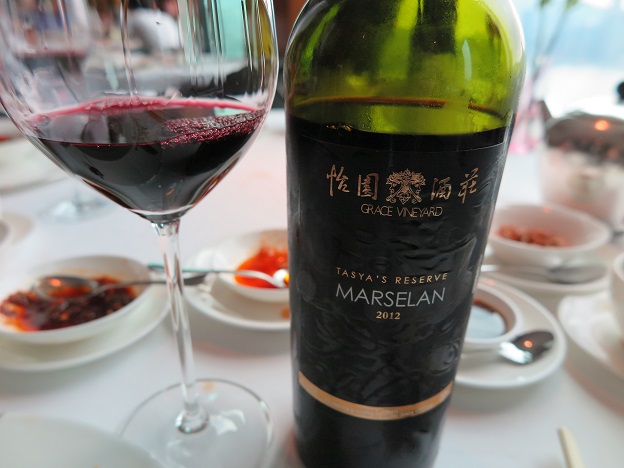 Grace vineyard 2011 Tasya’s Reserve Chardonnay is worth exploring. The pale straw color with complex tropical fruits with some nicely integrated oak. On the palate, fruit acid and oak are well balanced. The 2012 Marselan is something spicier, bigger and more concentrated and high in alcohol. 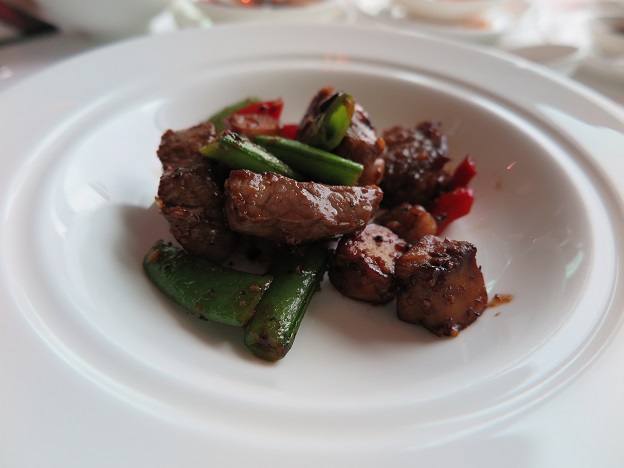 Moving onto the <Wok-Fried Wagyu Beef Cubes with Chiu Chow-Style Soy-Marinated Goose Liver>, we had segued into a very rich meat dish that was packed with flavour and richness that really didn’t feel too heavy, which was partly due to the portion size, which we were grateful for, as we know there was so much more to come. 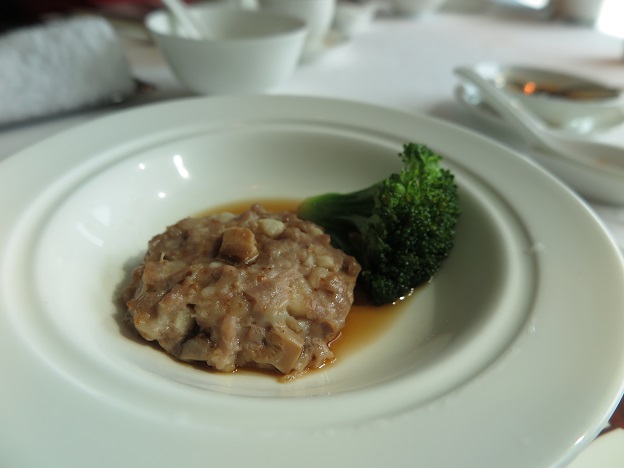 <Steamed Minced Pork with Tai O Salted Fish> This is the classic Cantonese comfort food to many and every mother has their own secret recipe to create this dish to encourage their kids to eat during dinner. Tai O is a famous fishing village in Hong Kong’s New Territories and even if you are not partial to salted fish, the aroma is strong and fragrant and add a hint of saltiness to the pork with dominant juicy flavor that is cooked to perfection. A simple dish to get it right yet can turn this dish to a disaster as the pork can be easily over cooked. Best to go with a bowl of steam Jasmine rice. Classic combination that never go wrong. 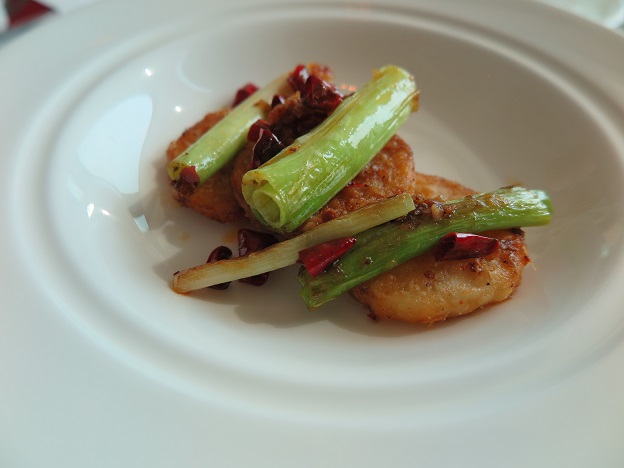 The usual choice for a vegetable dish is something green, but this time we were surprised with a <Northern Chinese-Style Crispy Sliced Potato with Dried Chili Pepper> it was absolutely delightful. Probably this is the only dish that is not Cantonese Cuisine yet the crispy potatoes were exactly as described, but retained a little softness inside and was incredibly tasty, with the chili pepper giving a bit of heat, but not over-powering the dish. 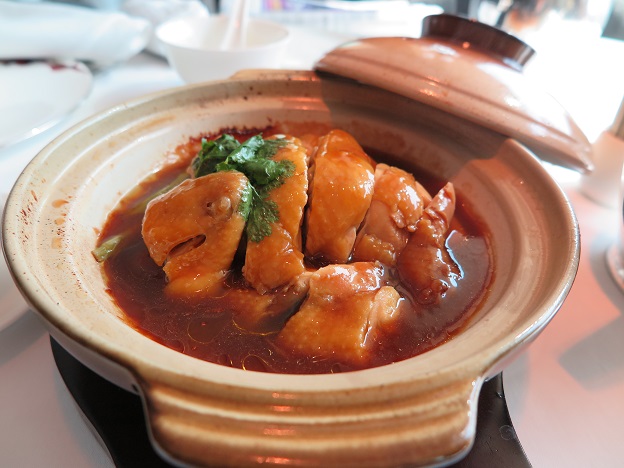 You would think that that would be the end of our meal and here came the <Marinated Chicken in Shaoxing Wine> was an interesting variation on a quintessential Chinese cooking casserole for chicken. The Shaoxing wine adds a piquant flavor to the chicken, It is simple aromatic and fills the air while the lid open. Chinese Shaoxing wine may not be to everyone’s taste but adding another dimension without over powering the tenderness of the chicken. 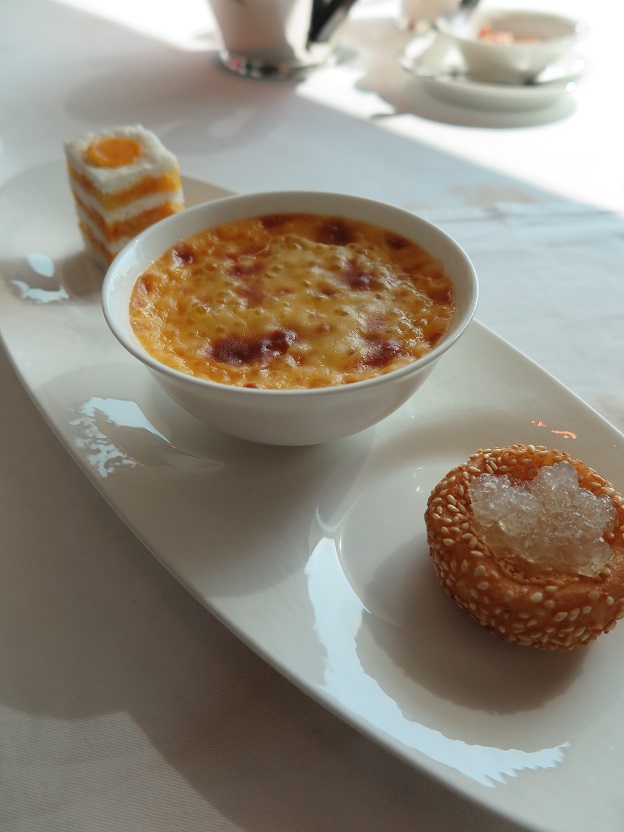 The dessert of <Baked Sago Pudding, Egg Yolk Sponge Cake and Sesame Puff with Bird’s Nest> sounded like it would be too heavy, but with three separate components, it had a lightness to it, although the baked sago pudding cannot make you full very quickly, so sensibly we tried the other two first. The puff itself was so lightly and gently crispy, with the birds nest being so precious that creates a delicacy that was pleasing to taste. The sponge cake was not as moist as we expected, but the flavor imbued within was very rich in an enjoyable way. The sago pudding is always the perfect way to end a Chinese meal and quite enjoyable eating every last morsel. 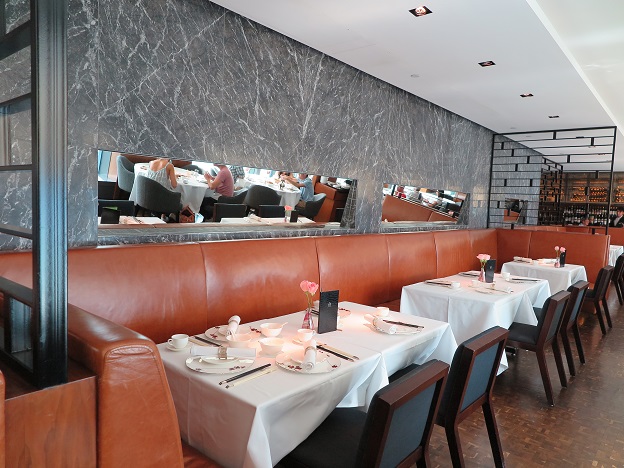 Dinning at ABOVE & BEYOND not only for the Sir Terence Conran eye-catching décor but the food speaks for itself by such exquisite Cantonese Cuisine offered. This restaurant already seems to have a lot of regulars and well deserved patronage and now we know why, as the kitchen really delivers with flair, while keeping the classic methods infused with something special in some dishes. They have just gone ABOVE & BEYOND to make things work.