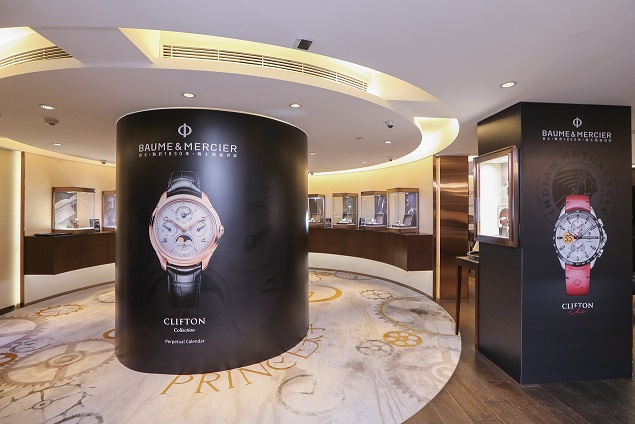 Baume & Mericer opened the Clifton Watchmaking Exhibiton in Prince Club (Peking Road of Tsim Sha Tsui Shop recently to persue at the height of the art of watchmaking, apart from displaying Clifton Baumatic™ collection with an in-house movement developed by Richemont Research & Innovation team, emblematic masterpieces of Clifton Collection like Flying Tourbillon, 5-min Repeater and Perpetual Calendar Watch were also showcased during the exhibition, it shows Baume & Mercier is able to create and handle the highly technical functions and in-house movement. 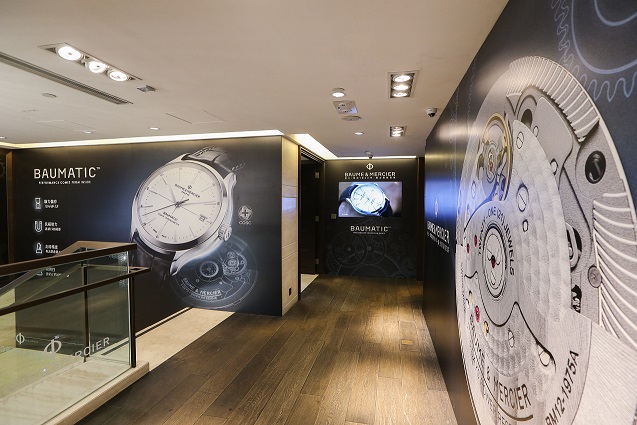 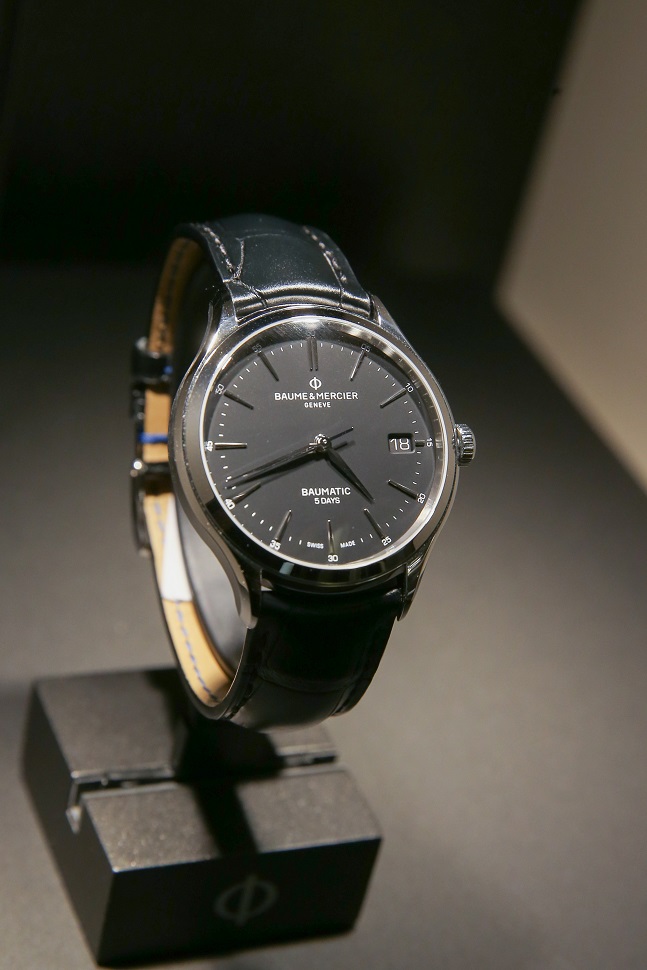 Clifton Baumatic™ - in-house designed mechanical movement
The Clifton Baumatic™ is the first watch by Baume & Mercier equipped with a mechanical movement that is fully designed in-house, featuring new materials and very innovative concepts. The culmination of watchmaking expertise acquired since 1830 and five years of research and development – it was designed to meet the needs of modern life. Clifton Baumatic™ is incredibly punctual. Its new hairspring works together with its variable-inertia balance wheel to guarantee a precision of -4 to +6 seconds per day. This enables the Clifton Baumatic™ to meet the very exacting standards of the Contrôle Officiel Suisse des Chronomètres (Official Swiss Chronometer Testing Institute, or COSC) for the model M0A10436 in this collection. Clifton Baumatic™ is stronger, and its power reserve lasts much, much longer. Through the optimization of its barrel, escapement and hairspring, it offers no fewer than five full days, or 120 hours, of power reserve. Also, thanks to the use of silicon and non-ferromagnetic elements, the Clifton Baumatic™ offers a magnetic resistance twenty-five times higher than the current standard. Besides, lubricating oils used in the Baumatic™ caliber are the result of years of research, and they offer the very best performances. In concrete terms, they make it possible to have maintenance services performed much less frequently than the usually recommended five-year period. 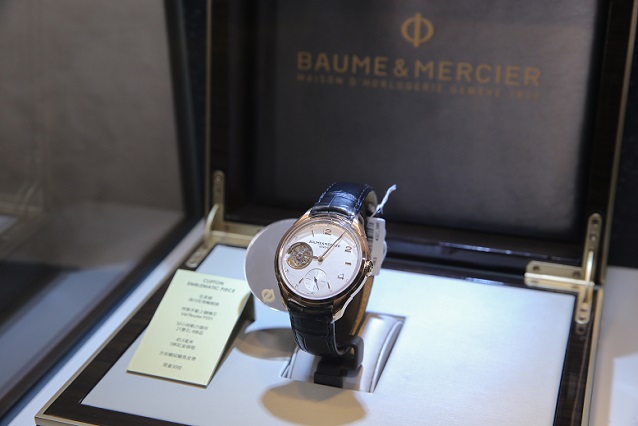 Clifton Manual Flying Tourbillon
This limited edition model comes in a large 45 mm 18K red gold case containing the exclusive Manufacture hand-wound ValFleurier P591 calibre movement with a flying tourbillon at 9 o’clock. This kind of construction without an upper bridge leaves room for the mechanical ballet of the tourbillon cage, to this day considered the queen of all complications. It is limited to 30 pieces with engraving: “Limited Edition, 18/30” for the only one in Hong Kong. 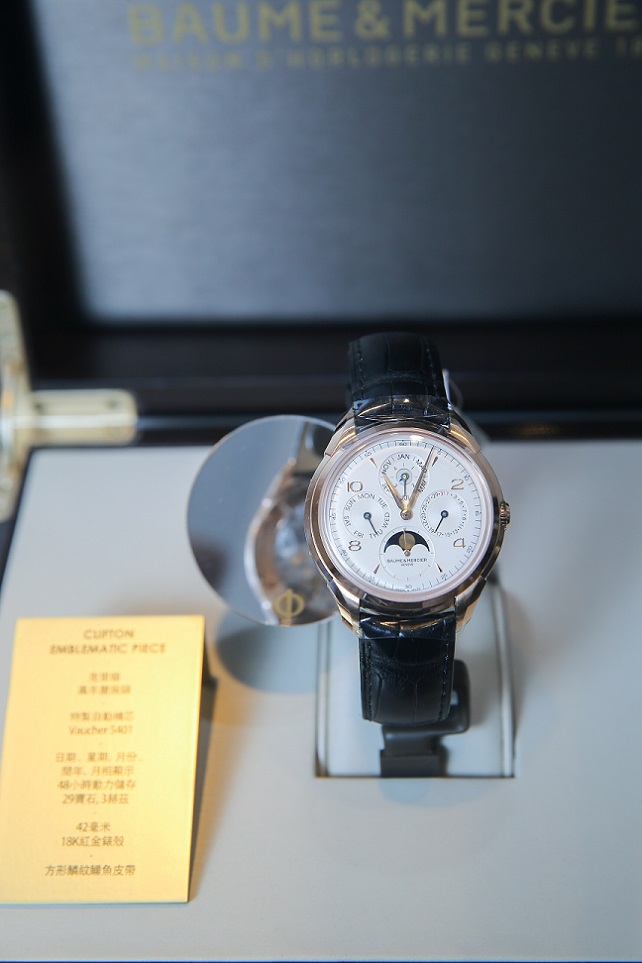 Clifton Perpetual Calendar
It is endowed with a «mechanical memory» of 1461 days, the equivalent of four years, which animates the self-winding Vaucher 5401 movement within the watch, designed from a Dubois Depraz 5100 Module. Ticking away at 21,600 vibrations/hour for a power reserve of 48 hours, this finely finished calibre can be admired through the sapphire crystal back. Display side, the new Clifton Perpetual Calendar captivates by its simplicity: topped with a sapphire “chevé” crystal for better readability, its silvered opaline domed dial is stylish and classic, complemented by numerals and stamped indexes in 18K red gold, while the blued hands indicate the watch’s calendar functions. 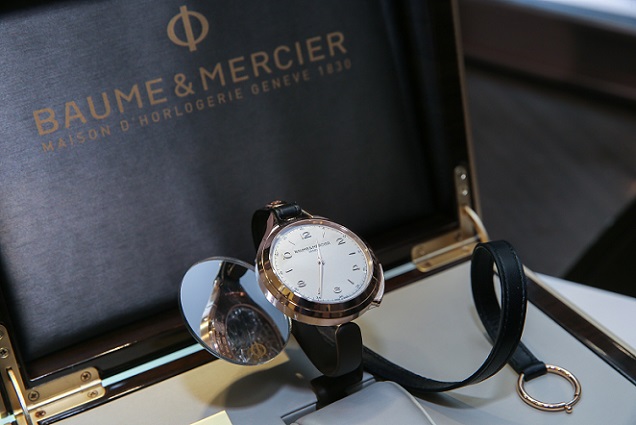 Clifton Manual 5-min Repeater
In the great tradition of pocket watches, this 50 mm timepiece in 18K red gold offers a minute repeater mechanism that marks the time upon request with a chime for the hours and 5-min periods. The magnificent construction of the Manufacture calibre, with an additional Dubois Depraz (D73) module whose skeletonizing of the bridges of the hand-wound movement were meticulously drawn in Baume & Mercier’s Design Studio, can be seen through the sapphire crystal case back and is engraved with the number 18 out of 30 for this limited edition in Hong Kong. 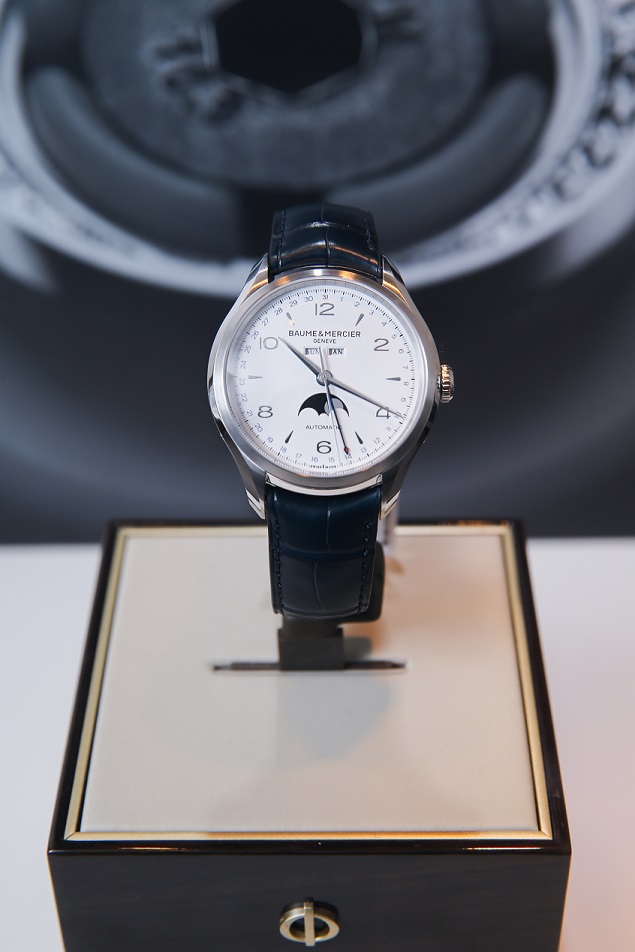 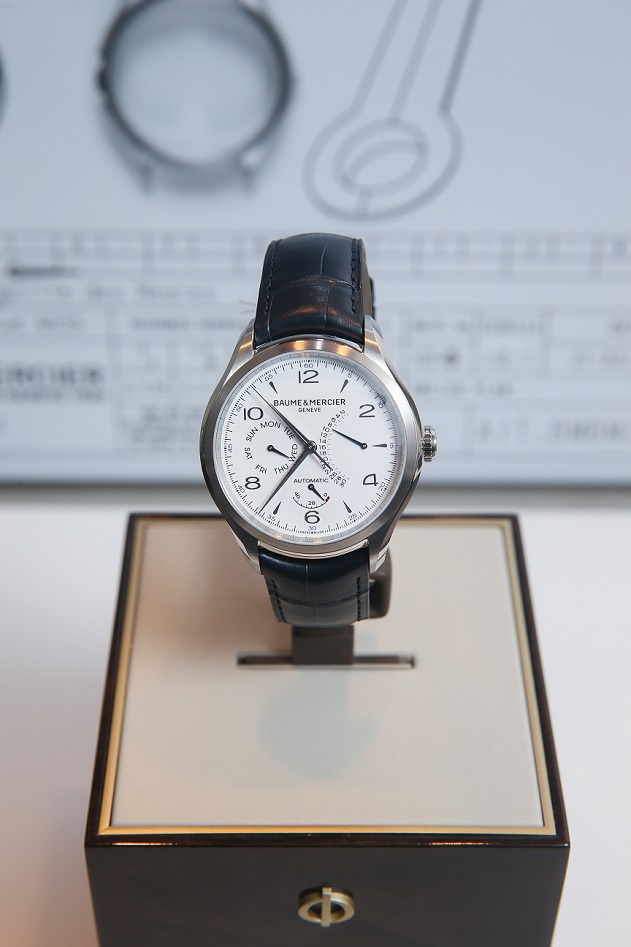 Clifton Power Reserve, Retrograde Day and Date
The dial of the second and most contemporary design features additional hands that indicate the day within a display aperture, the retrograde date along a wide arc, and the power reserve at 6 o’clock. 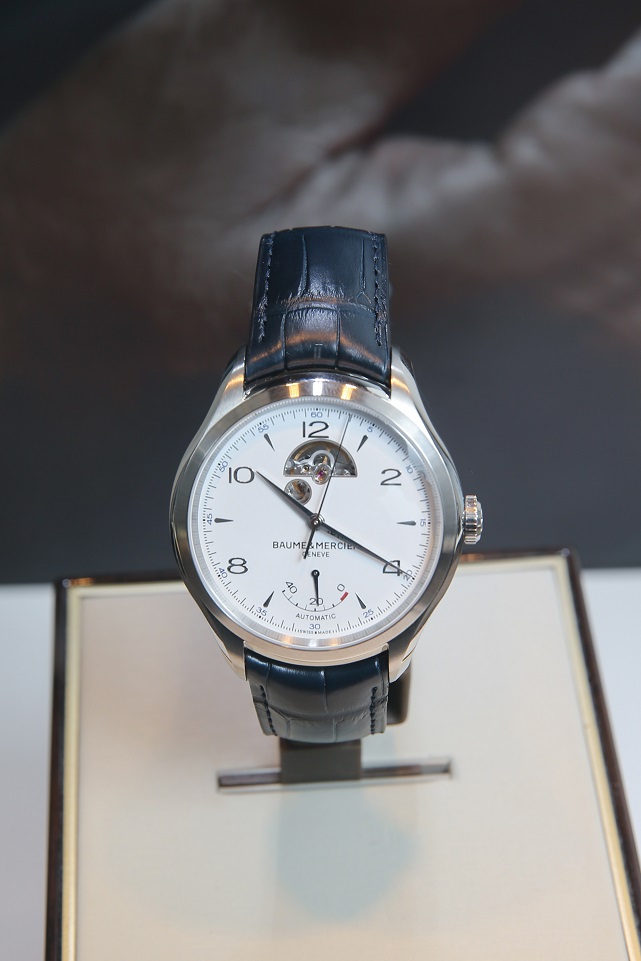 Clifton Open Balance Wheel and Power Reserve
The final Small Complication model also features a power reserve indicator at 6 o’clock. On this model, Baume & Mercier decided to unveil part of the movement by skeletonizing the dial at 12 o’clock. Fine watch aficionados will enjoy observing the oscillations of the balance wheel and the beat of the escapement anchor through the opening in the dial. 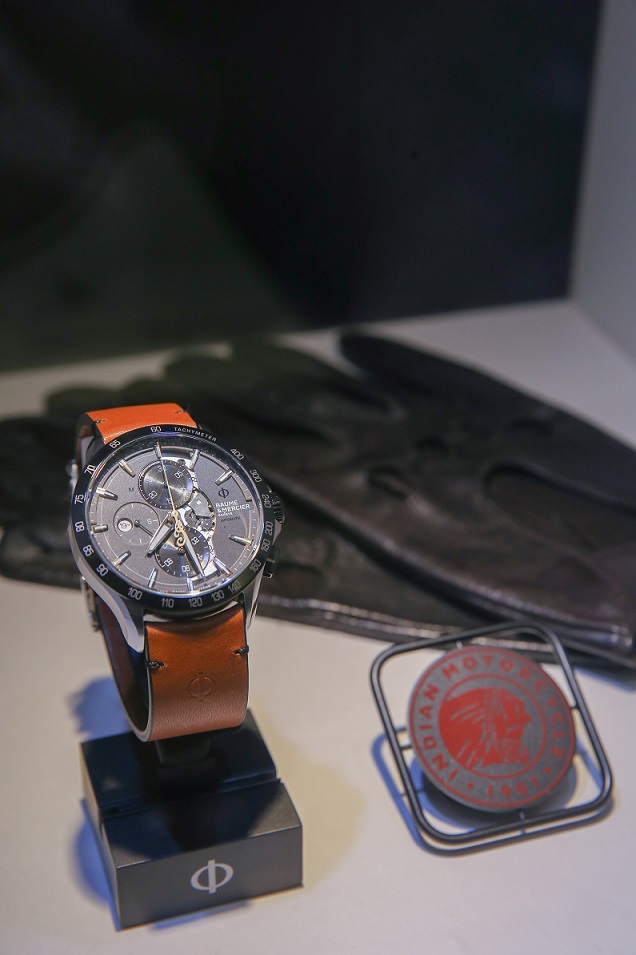 Clifton Club Indian® Chronographs
Baume & Mercier has teamed up with Indian Motorcycle®, America’s first motorcycle company, founded in 1901. This partnership was sealed in 2017 at the Bonneville Salt Flats, at the celebration of the 50th anniversary of the land speed record set by Burt Munro in 1967 on his Indian Scout Streamliner. That year, Monroe achieved an official speed of 184.087 miles per hour on a modified motorbike in the under-1,000 cc category. The feat earned him the nickname “the world’s fastest Indian”. To commemorate this record, unbeaten in its class, Burt’s great-nephew Lee Munro took to the famous salt lake in August 2017 in the saddle of a modern Indian decorated in the same colors as his hero Burt’s original Indian Scout. Founded on shared values, this new partnership expresses Baume & Mercier and Indian’s passion for an independent spirit, reliability and uncompromising performance. Limited edition of the three Clifton Club Indian® chronographs are powered by robust integrated automatic calibers. The architecture is structured to evoke the sculptural aesthetic of the powerful V-twin engine. Housed in a 44 mm steel case, the sporty but elegant design of the three models will appeal to lovers of fine mechanics and powerful performance. They represent an invitation to travel and to surpass oneself. 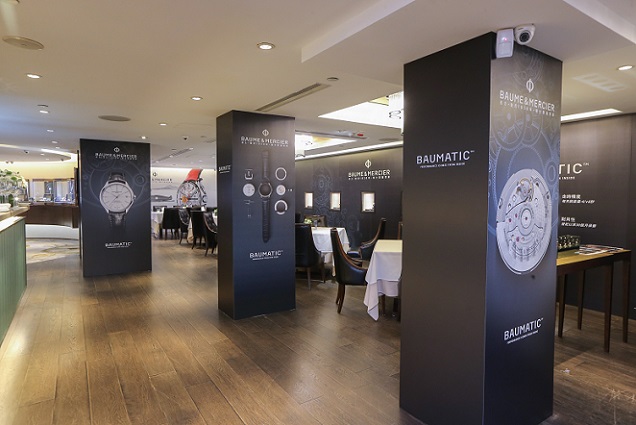