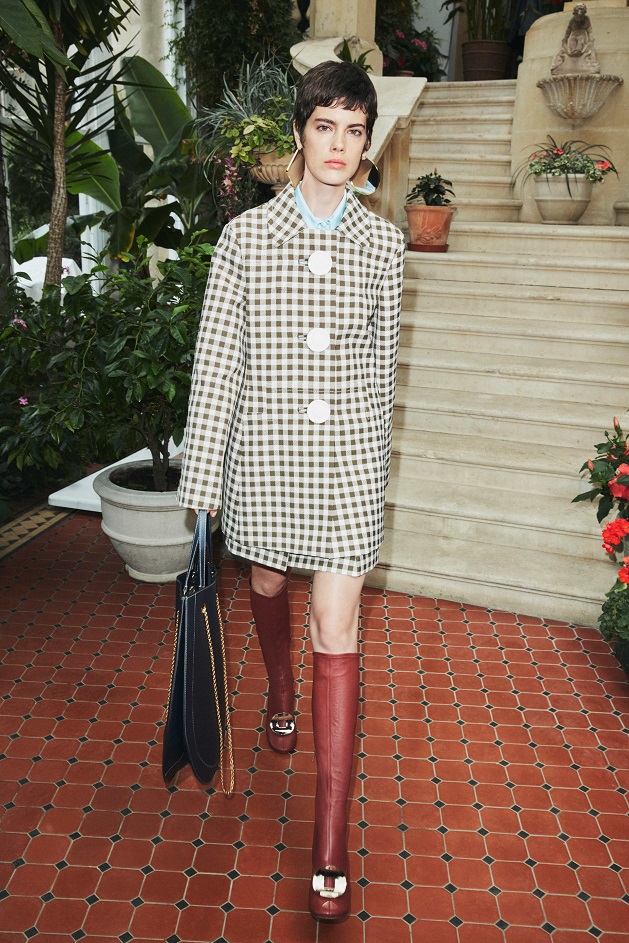 Mulberry SS2019 collection takes inspiration from not only the aesthetic of the era, but the mood. The sixties beat - of optimism, positivity and energetic spirit - animates the collection. It is classic, with a twist. Mulberry is a brand that is galvanised by British heritage and culture - taking from its traditions to write new pages of our history. The sixties were a time when British influence inspired the world and defined the shift of popular culture. But they also represented a period of freedom, emancipation and revolution - the birth of modernity and modern fashion. 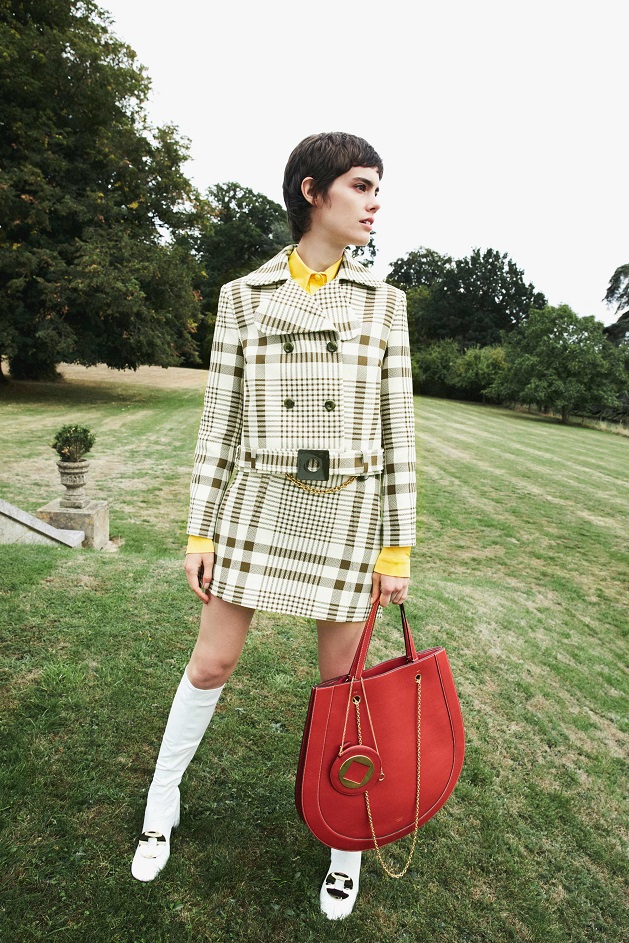 “The idea of Britishness is composed of so many different elements” says Creative Director Johnny Coca. “Over the past seasons we’ve been exploring the rebellious, the posh and the aristocratic alongside glamourous and romantic feminine figures. For this new season I was looking at a defining moment in British culture - the Swinging Sixties and its hedonistic and iconic imagery. I wanted something fun, dynamic, light-hearted, candid, graphic and pop. It’s a collection that revisits the spirit of the sixties with the attitude of today.” 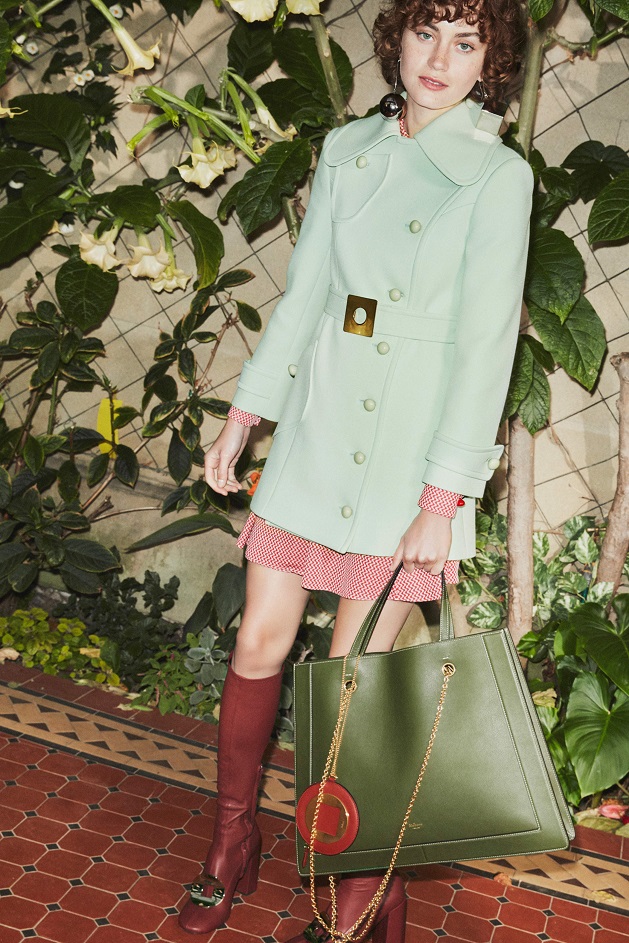 The striking silhouette of the decade is the blank canvas for the SS2019 collection – an invitation to explore textures, textiles and prints, with a new pop energy. Today’s Mulberry muse is youthful and dynamic in brief miniskirts and swinging coats, pea-jackets and trenches cut with precise lines - straight and narrow, or rounded into sweet, girlish scallops. 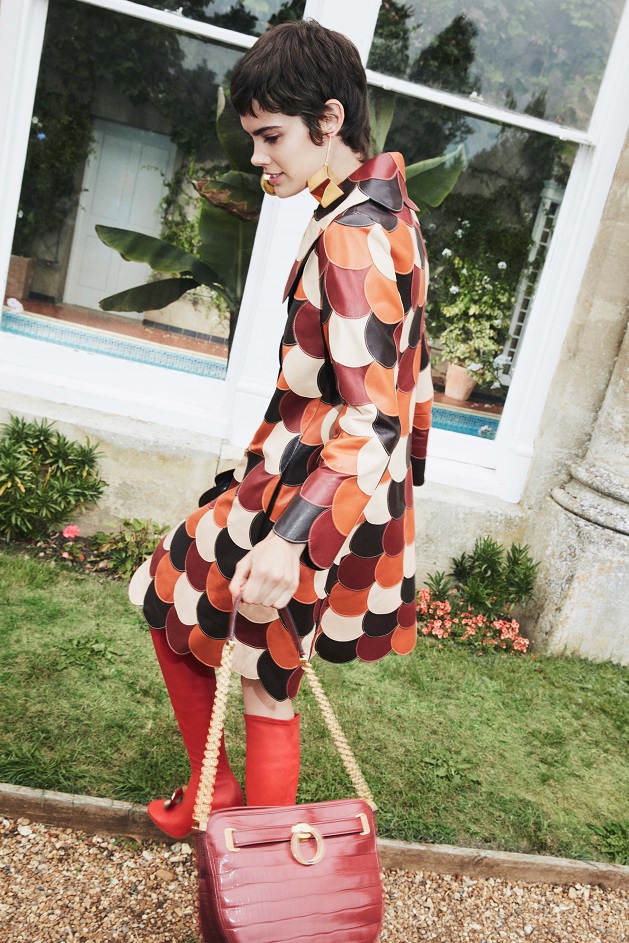 British sixties couture, the style of Carnaby Street and the King’s Road, the models Lesley ‘Twiggy’ Horby and Jean ‘The Shrimp’ Shrimpton - all inspire. The feel is more urban and urbane, although there is also a touch of craft, with crochet dresses in delicately-coloured metallic lurex, alongside matching wide-brimmed hats. 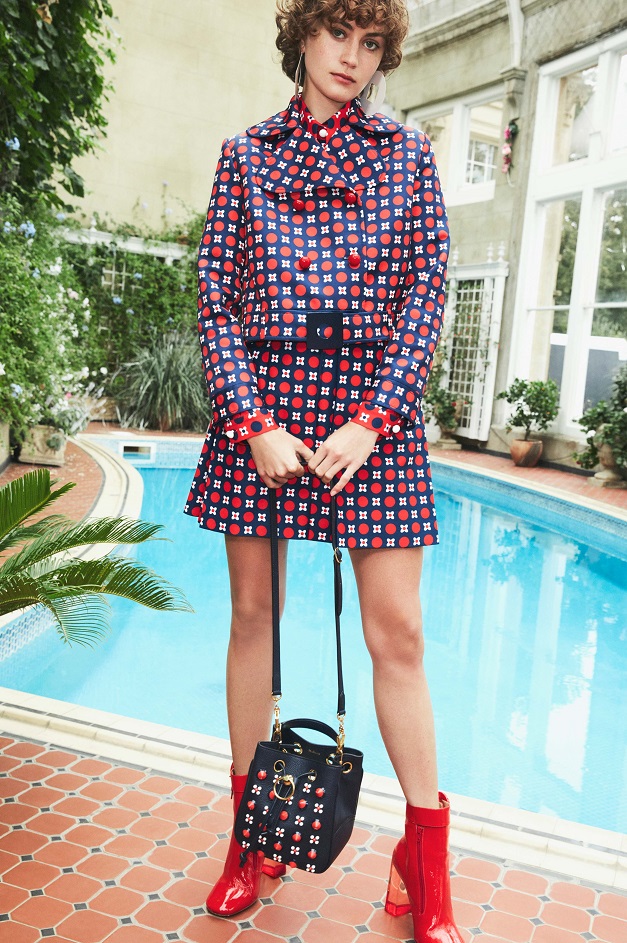 Colours are joyous, combining vibrant shades of pillar-box red, teal and royal blue with classic navies, camels and greys. There are also sugared-almond pastels – mint julep, lemon and soft pinks, mixed with fresh white. Prints alternate between the geometric – Op-Art nail head polka-dots combined with graphic quatrefoil daisies; an array of checks from windowpane through to gingham - and psychedelia blurs of manipulated florals, as if captured underwater, printed on crisp gazar. 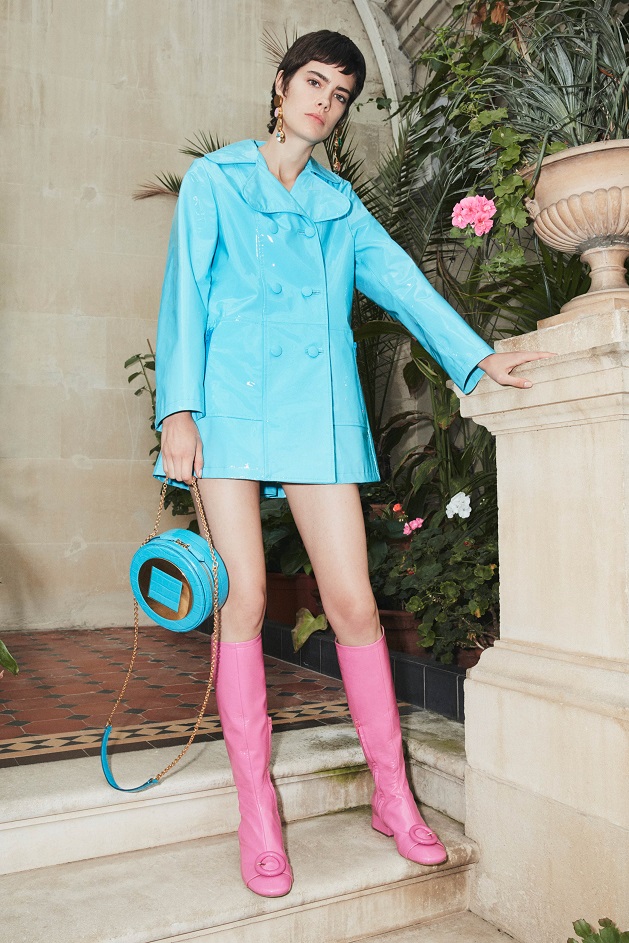 The Brockwell is a new crescent-shaped Mulberry archetype that also makes use of a variant on the Rider’s Lock. Geometric shapes inspire new clutches aptly titled the Roundabout and the Square – named after British street suffixes. 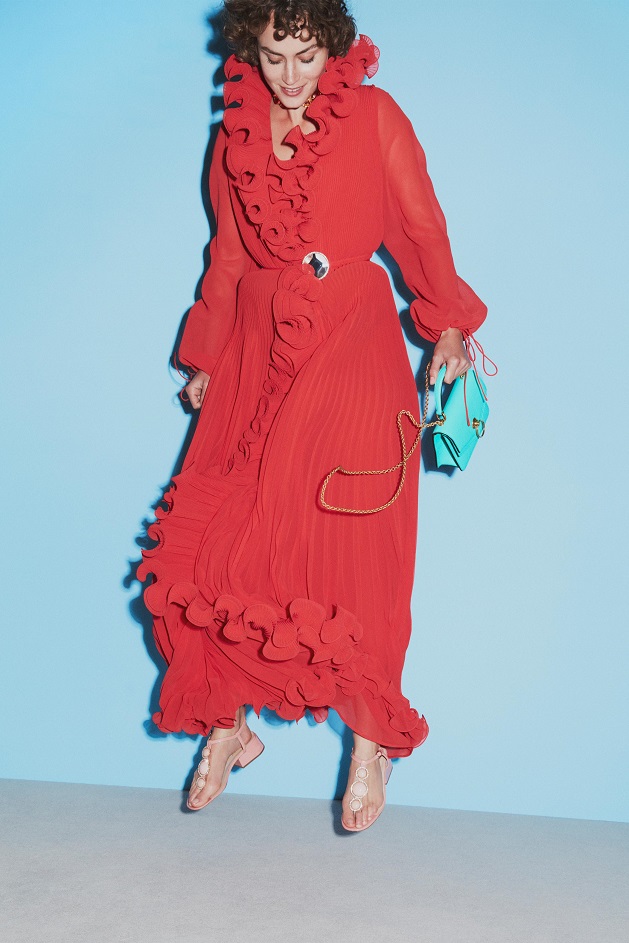 Inset with plates of polished metal and patchworks of leather, their shapes also inspired the Vale, a flat and clean-cut leather tote.  The accessories also share their palette of primaries and fondant shades with the collection’s clothing. 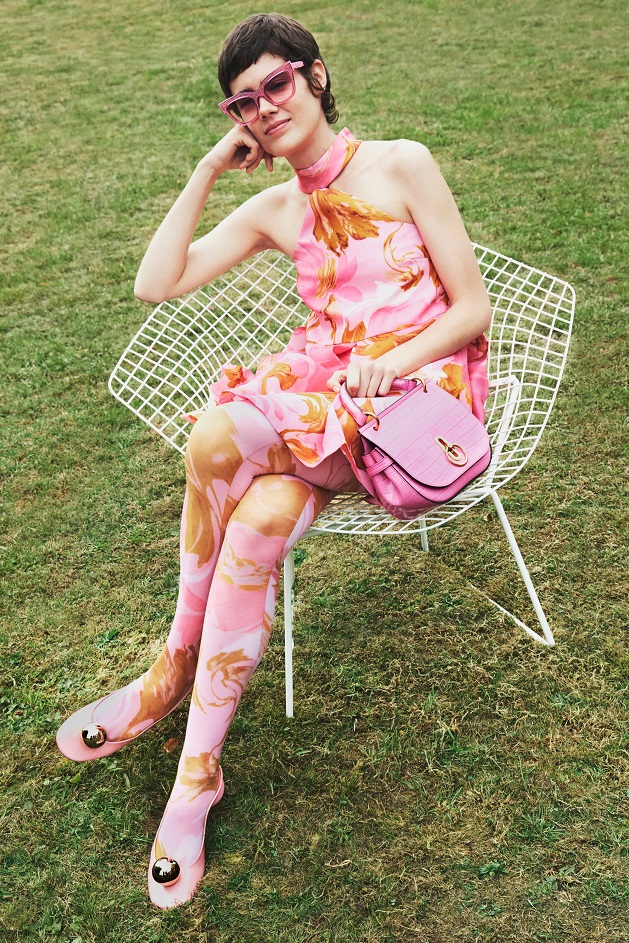 The accessories borrow elements from the fashion: the polka-dot and daisy graphic becomes three-dimensional bead embroidery patterns on the Mini and Micro Seatons, and the Small Amberley Satchels, while checkered patterns appear in woven leather on the Leighton and on a new key silhouette named the Hampstead. A bucket style with both a top handle and cross-body strap, the Hampstead features leather drawstrings that cinch the bag closed by passing through a new take on the Rider’s Lock, a Mulberry hardware signature. 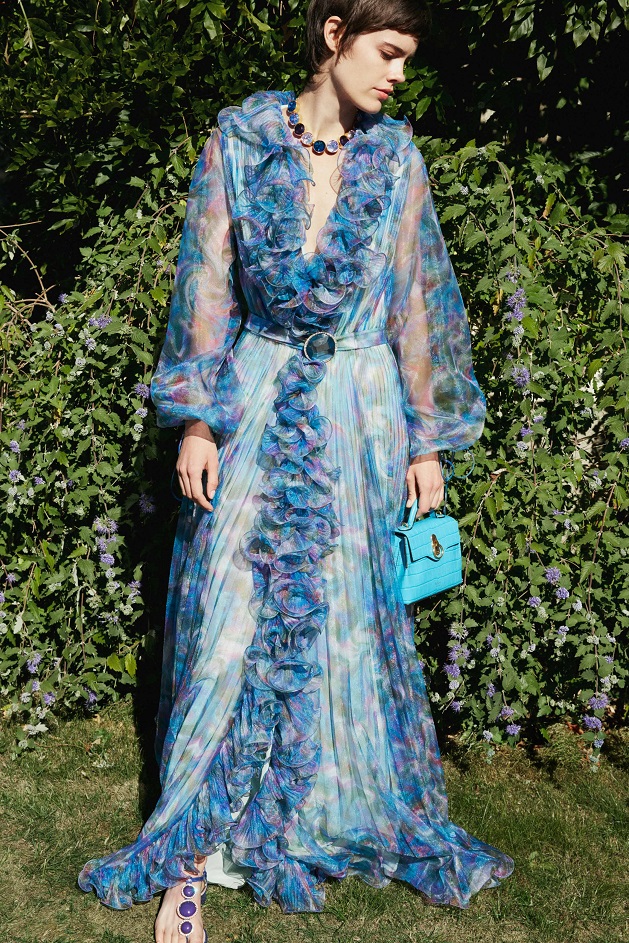 Shoes come both high and flat, square-toed and feature smoked plexiglass heels in the collection’s key shades. Inspired by the ‘metal couture’ of the sixties, jewellery elements embellished with stones and mirrors snake up the ankle of sandals; others feature burnished gold buckles, or three-dimensional cube and spheres as abstract decoration on the vamp. Below-the-knee stretch boots, perfectly coordinated in block colours, streamline and exaggerate the legginess of the silhouette. This season, the Mulberry jewellery is striking - oversized, playful, wilfully clashing shapes and textures. Mirrors and transparencies are key, combined with the same stark geometric shapes that appear on the shoes - in polished metals, or set with a pavé of pastel-coloured crystal. 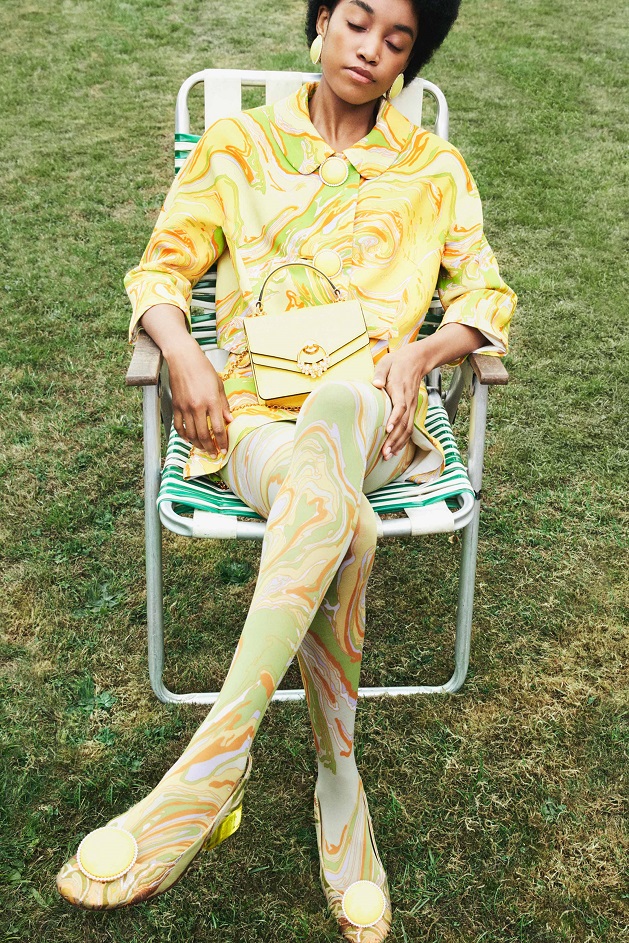