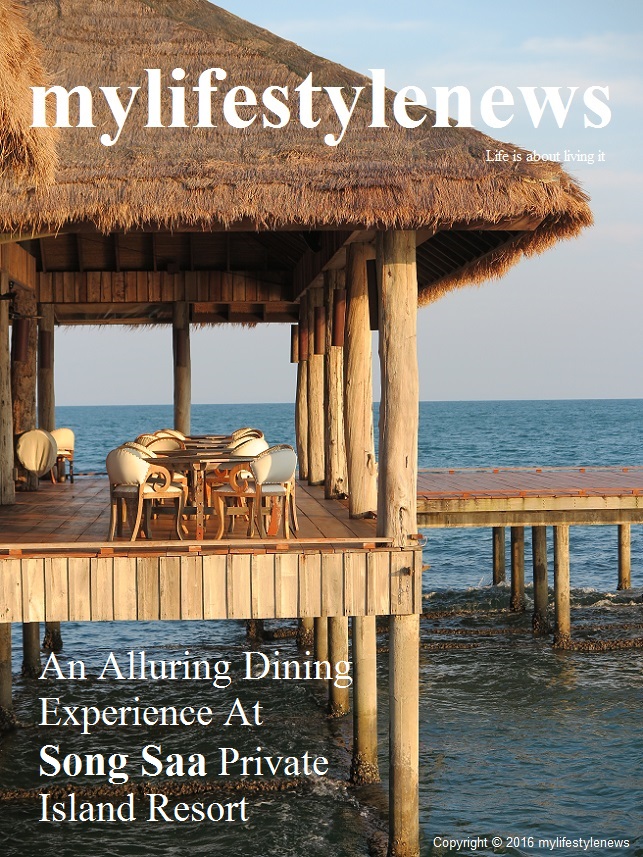 Dining is definitely another highlight while staying in Song Saa Private Island as the resort’s menu are inspired by the surrounding environment. It is a culinary journey of sustainable and responsible cuisine by teaming up to support local farmers, fishermen, growers and artisan purveyors right in their own backyard. The culinary experience delights mylifestylenews in many other ways of their freshest and sustainable ingredient used and creativity in their delicate fusion of traditional Khmer and western gastronomic presentation…… Once you step onto this exuberant private island, you are set free by exploring the food & beverage arrangement. There is not a single worry for wanting or planning on What’s-for-dinner-tonight? The experienced culinary and food and beverage team will have all the answers for you, as long as you are not trying to find any bones in the egg, they will have their ability to satisfy almost every single needs to please you. 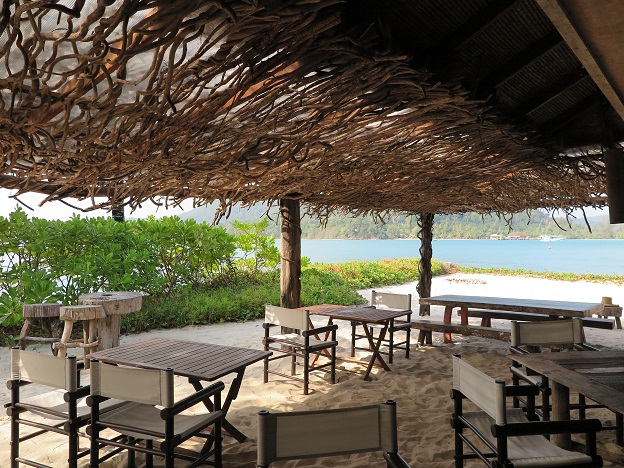 Besides, you can choose to either dine in your own villa where they deliver the food with traditional street vendor’s basket with inspiring presentation or 3 of the existing food and beverage outlets: the Vista Bar and restaurant, Driftwood Bar, Pool-side dining. 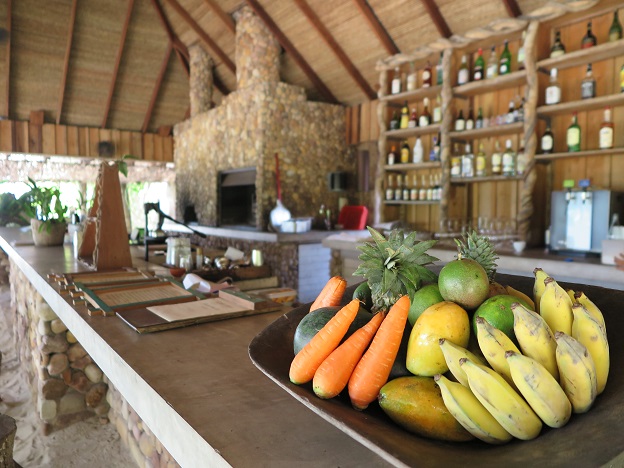 The relax and rustic Driftwood Bar is ideal for quite bite and drinks, offering pizza and tapas-style menu. Simply relax and enjoy the pool-side dining where the menu from the Vista Bar takes you across Cambodia without you move inch. While, the sky is clear, dining under the blue sky is a must while the evening cool sea breeze breaks in. Book in advance, we suggest! 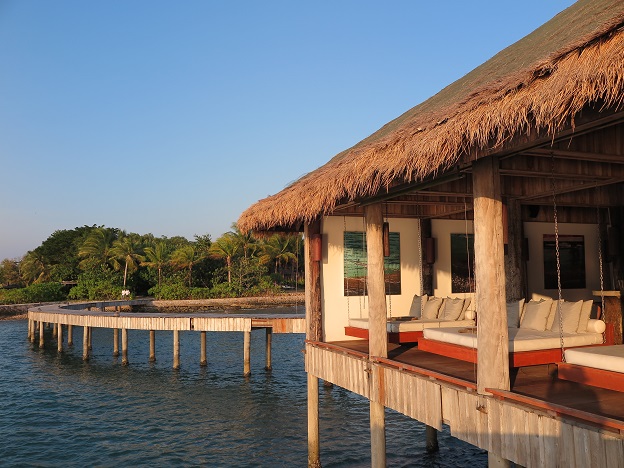 The Vista Bar and Restaurant sitting just off the island’s shoreline and surrounded by sea, pick the swing chair or the box seat, it is the best spot to indulge yourself with their signature cocktails while watching the dramatic sunset and romantic starry nights. 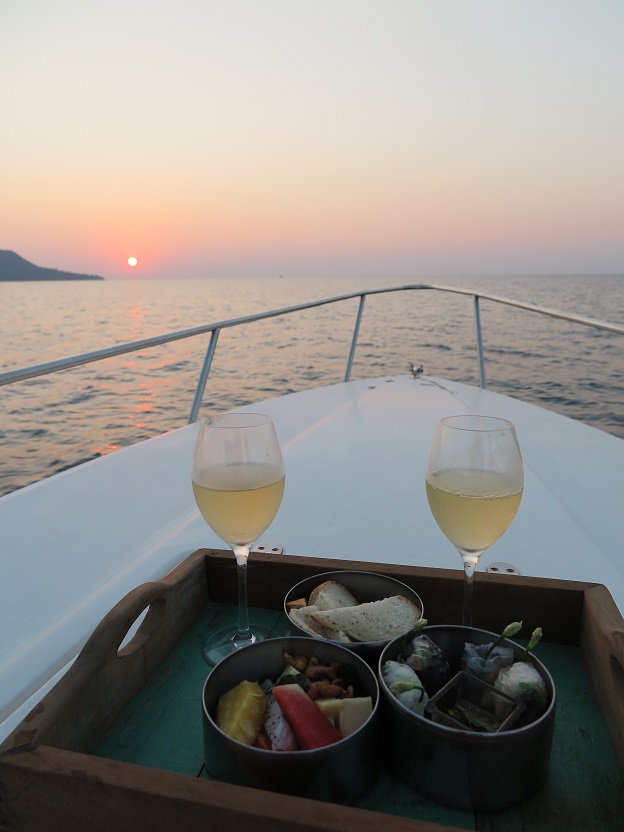 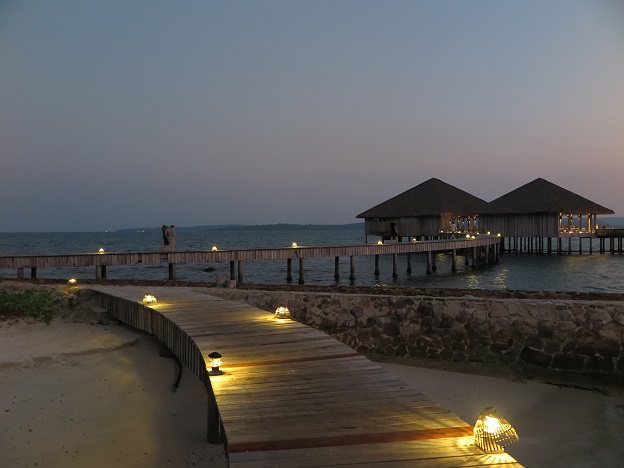 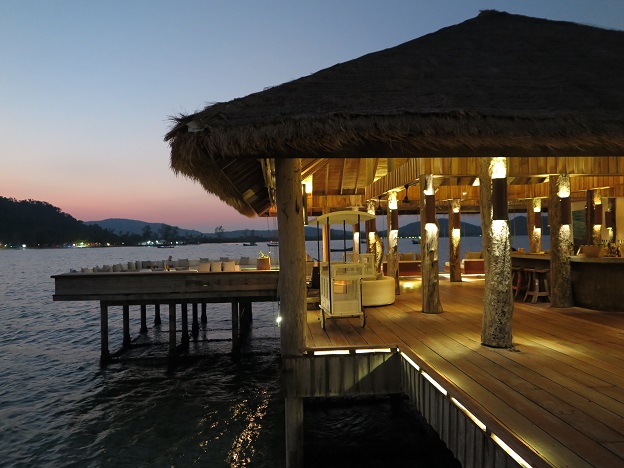 Pick your favorite seats to watch the enchanting sunset 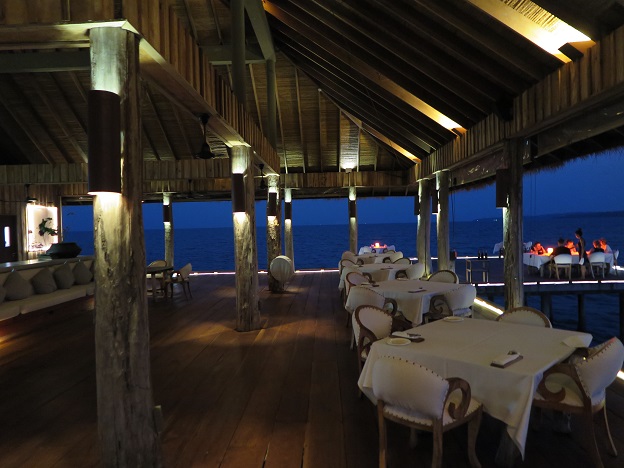 The high ceiling interior of the Vista Bar & Restaurant 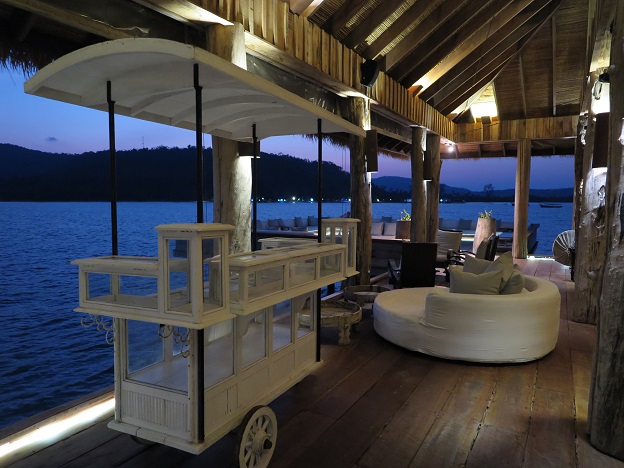 Another cozy corner at the Vista Bar & Restaurant 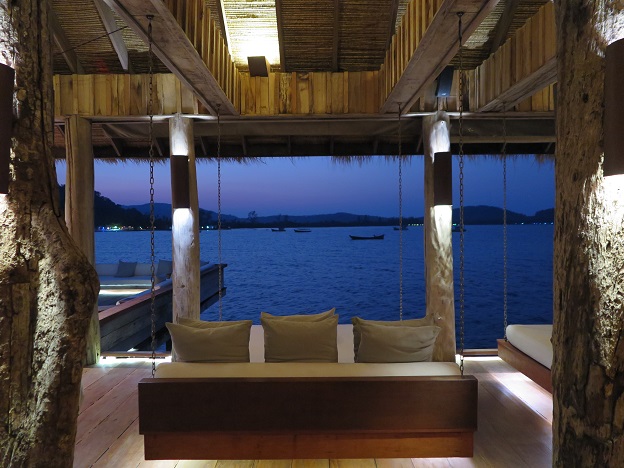 Destination dining is another definite excitement. You may choose one of the island’s private pick secluded hideaway spots from a private dining experience designed entirely for your taste. We suggest the sunset cruise and island hopping picnic. You will love this idea. 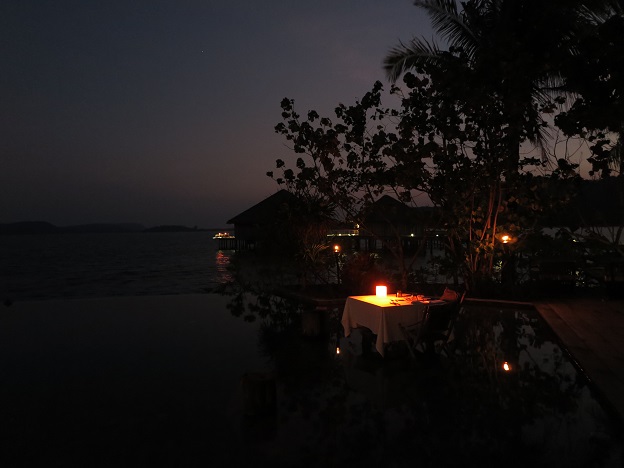 Dining at Song Saa Private Island reflects the harmony and balance and limitless and YES! all day dining means it is anytime, anywhere 24/7 as you please. You heard us right! We tried a variety of dishes throughout our stay and there were a few that resonated with us more than others, here are some of our favorite pick: 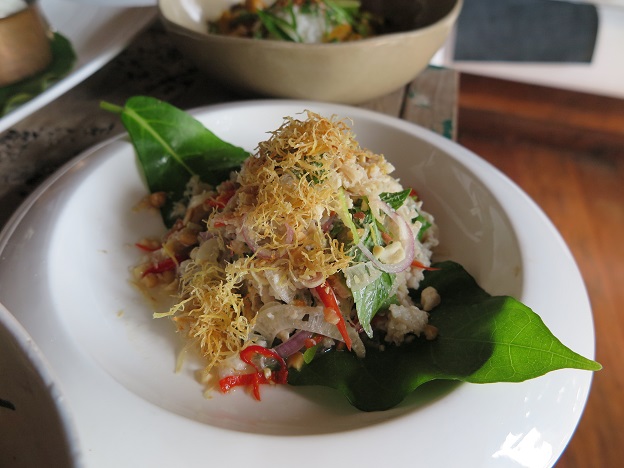 <Barramundi “Plea-Trey”>
Locally caught barramundi with green “garden” chili, banana palm, toasted peanut, mint, lemon-balm and basil, with a marinade of fish sauce, palm sugar and lime juice. “Plea-Trey” is the Khmer version of the Peruvian “Ceviche”, so a dish of raw fish that is chilled and cooked in citrus acid. The fresh local barramundi has a mild flavor and white, flaky flesh that remains intact and maintains its texture when cured in citrus. There is a pungent punch with all these ingredients combined that is mouthwatering and the garnish of crunchy fried shallots creates that nice contrast in texture, giving every mouthful a plethora of flavor and textural sensations. 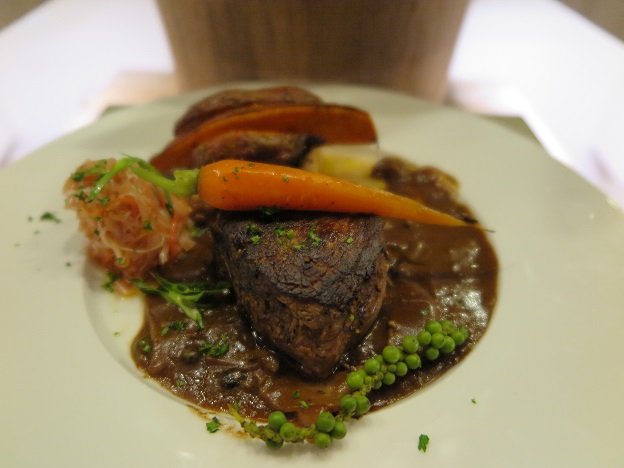 <Kampot Pepper Beef>
The original “Steak au Poivre”. 6oz black Kampot peppercorn crusted “Stockyards” striploin with Song Saa “stunning” potato wedges, zesty root coleslaw and fresh Kampot peppercorn sauce. What’s not to like about this dish and interestingly enough that this incredibly popular steakhouse dish the world over was inspired by one of Cambodia’s greatest culinary treasures – the Kampot peppercorn. When the French colonists arrived at the end of the 19th century, there was a real “pepper fever”. They intensified the production and produced up to 800 tons a year at the beginning of the next century, thus “Steak au Poivre”, Pepper Steak, became the rage in Paris in the 1920’s with Kampot peppercorns in high demand. For this classic bistro dish the resort uses Australian grain-fed Angus beef, locally grown wholesome wheat, barley and sorghum, with no growths promotants, antibiotics, animal by-products or genetically modified (GMO) feed products used. Sounds incredibly wholesome and tasty and it truly is! The fresh green peppercorn sauce finished with sweet sherry makes this a classic dish. All that’s missing is that glass of Cabernet or Shiraz! 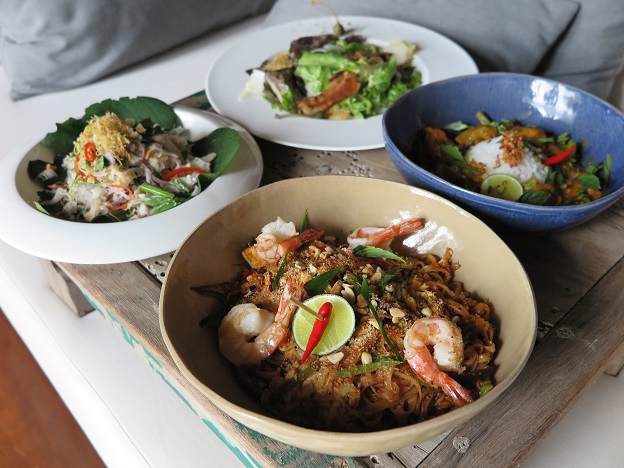 <Vegetarian Phad Thai>
Rice vermicelli noodles with peanut, tomato, mushroom, eggplant, peppers, bean sprouts, snow peas, chili, egg and bok choy in a tamarind-coconut sauce. We added prawns one day and squid the next for some variation. There are many versions of this classic Thai noodle dish and debates on what constitutes an “original” Phad Thai, so no one version is absolutely the right one, as each Thai household has a different take on what is the best. The Song Saa version has spicy, sour sweet, pungent, salty and earthy palate overtones, which we absolutely loved. Coconut milk is used to curb the heat and add a touch of richness and they start with a fiery curry paste of over 25 ingredients, which is the cornerstone of any good Phad Thai. Tamarind plays the key role as the souring agent in this dish, with lime, tofu, peanut, egg, chili, bean sprouts, coriander, palm sugar, shallots and fish sauce all playing the part of the brilliant supporting cast – the result of this all being a great blockbuster full of drama and endless action on the palate. 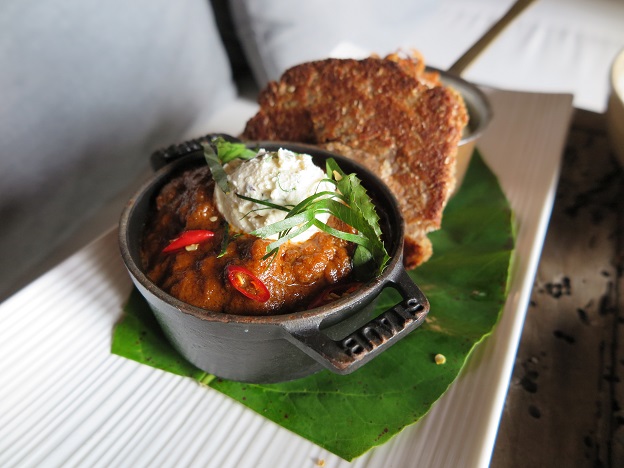 <Lamb Curry>
“Copper pot” Goan style “rogan josh” lamb curry with coconut basmati rice, fresh coriander paneer (Indian cheese) and ghee toasted cumin paratha. This dish is prepared at Song Saa with aromatic basmati rice cooked in coconut milk and curry leaves to help cut the heat of this intense curry. The lamb is first seared in ghee (clarified butter) until brown with onions and spices and then braised at low heat for 3 hours with the addition of yogurt, garlic, ginger, browned onions, saffron, milk, aromatic spice blends, tomato paste and dried Kashmiri chili being added in succession until the meat is butter soft and the liquid contents coming together to form a thick, rich gravy. There is also the addition of fresh homemade paneer as garnish, in which the cheese helps to balance out the heat on the tongue. Finally, there is the fresh baked naan bread made with fresh yogurt and coriander to help sop up all the leftover gravy. 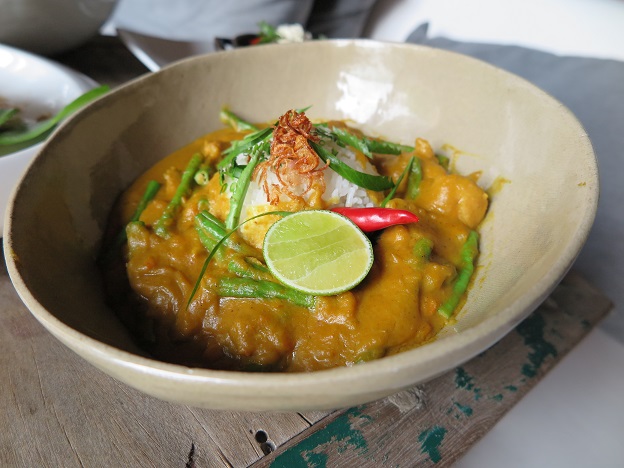 <Samlaa Khaeng Phet>
‘Cast iron pot” Cambodian chicken curry with lemongrass, ginger, coconut milk, chili, turmeric, potato, long beans, lime sweet basil and scented jasmine rice. This incredibly aromatic and deep-flavoured red chicken curry is made with a Cambodian spice paste that is used as a cornerstone in all local curries. “Kroeung” paste is one of the distinctive signature ingredients in the Khmer kitchen, with a base of lemongrass, galangal, kaffir lime zest, turmeric, garlic, and shallots. All these give it a fresh flavor note, but at Song Saa, they make this paste in fresh batches and allow it to rest and age, giving it depth and complexity in order to build deep and bellowing flavours. They first brown the chicken thighs in hot oil in a wok until caramelized and then remove them, keeping all the succulent juices to add back in later. The paste is then cooked in the hot oil in a wok to allow the flavours and aromas to come to life, then added some coconut milk and chili and cook until reduced and thickened. The chicken and its juices are then incorporated back into the wok with sweet potato, chicken stock, kaffir lime leaves, palm sugar, fish sauce, lime juice and additional coconut milk and simmer until the chicken is cooked through and the sweet potato is tender. The final step is to garnish with basil leaves and serve with rice. 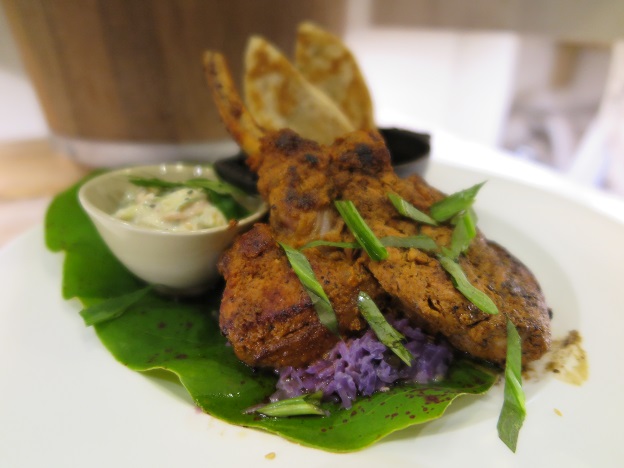 <Pork Chop>
Double-cut Tandoori roasted organic Cambodian pork chop with slow cooked “urad dal” lentils, coconut braised cabbage, cucumber-coriander raita and griddle charred homemade naan. The meat is marinated in yogurt and seasoned with the spice mixture masala. Kashmiri red chili powder is used to give it a fiery hue. The pork meat is 100% organic Cambodian pork accompanied by slow cooked urad dal black lentils, along with red beans and chickpeas. The dish is rounded out by slow braised coconut cabbage with fresh baked naan to round out this authentic Indian composition. 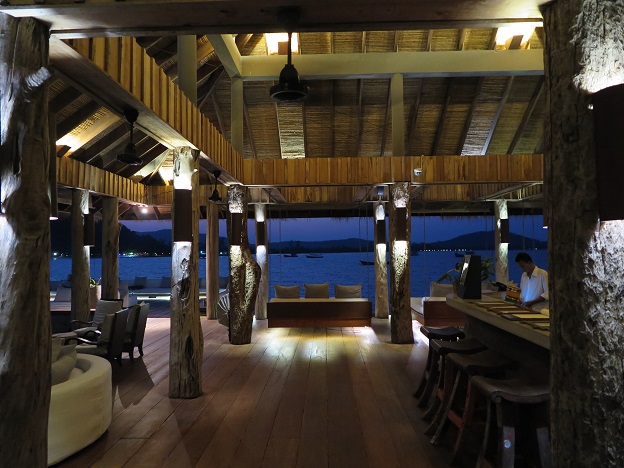