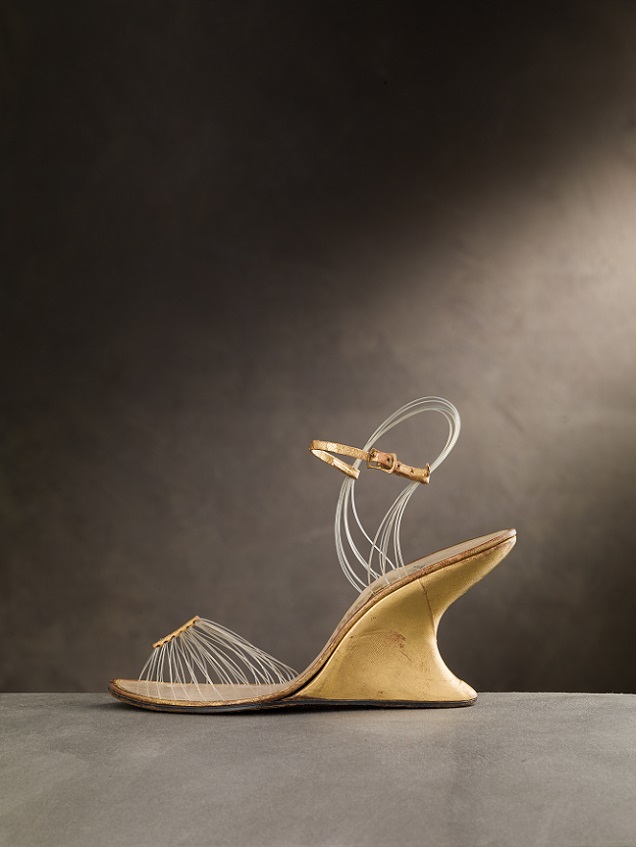 Salvatore Ferragamo forged the future of footwear through his constant search for Innovation, creating the unique shapes and details that are recognized today as Ferragamo icons. With details so unique, they boast their own copyright, these Signature styles influenced entire fashion seasons and were worn by the world’s most fashionable women. These are the shoes that wrote fashion history. One-of-a-kind masterpieces with luxurious detail and traditional savoir-faire that even after limitless reinvention have remained authentic to Salvatore Ferragamo’s original creations. Now, as the new Creative Director of the Ferragamo women’s shoe division, Paul Andrew continues to modernize these celebrated styles; first in his collection for Pre FW2017 and now for SS2018.

1947. The “F” Heel Patent
Flashback Between Past And Future

Salvatore Ferragamo was the first to envision the “F” Heel, patenting it in 1947. It was originally designed for a sandal and made from a combination of futuristic and Natural materials. Named the “F” Heel - perhaps due to its shape that mimics the sinuous line of a cursive “F,” or because the letter “F” is synonymous with Ferragamo – The heel owes its unique shape to the profile of a ship’s stern. Regardless of whether, the shape was inspired by the very ship that carried Salvatore back to Italy In 1927, this invention was the result of his pressing need to create something that had never been seen before and would symbolize a new woman with a bolder gait. His experiment was a success; with a transparent and light fit, the shoe was aptly named the “Invisible” sandal and perfectly aligned tradition with the future. It won the Oscar of the fashion world at the time, the Neiman Marcus Award for style, In Dallas, 1947. Today, based on An original drawing by the founder, the “F” Heel has been reinterpreted with updated elements and new material combinations to embody the ultimate synthesis of fine artisan tradition and applied technology. 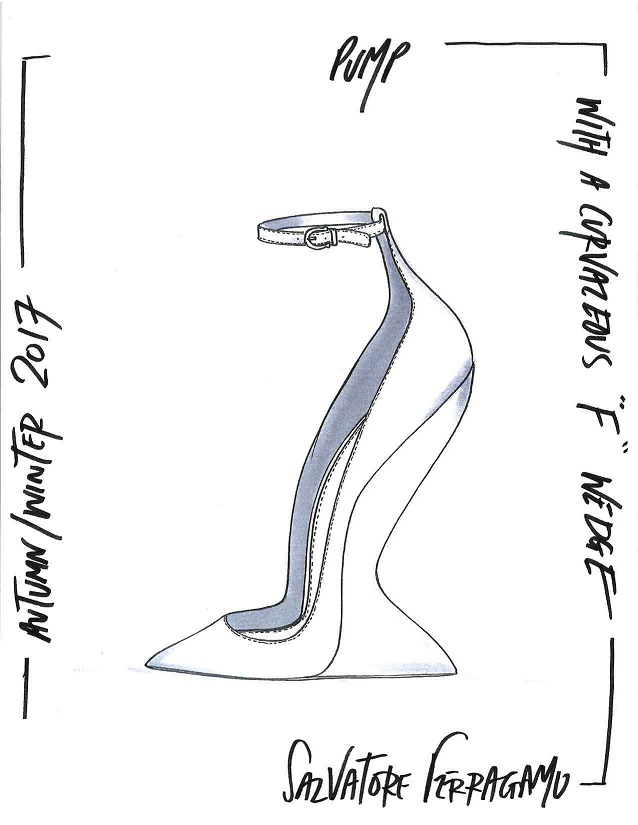 In 1939, Salvatore Ferragamo created an exclusive sandal with a special heel made of four vertical columns with a slightly concave top for comfortable fit. The iconic “Column” sandal took its name from this heel detail, which soon became known as the “Flower Heel” because of its unmistakable footprint. In constant demand from the American market, Salvatore Designed it for the most sophisticated of Hollywood’s stars. The Heel - classic, seductive and feminine, but equally light and comfortable - remains one of Ferragamo’s most renowned made in Italy artisan traditions. While Yesterday’s heel was crafted with small cork cylinders covered in gold kidskin, today’s high-tech version has replaced cork with lightweight and durable plastic covered in a variety of materials, including leather, suede, and fabric, or lacquered with a special metallic coating. 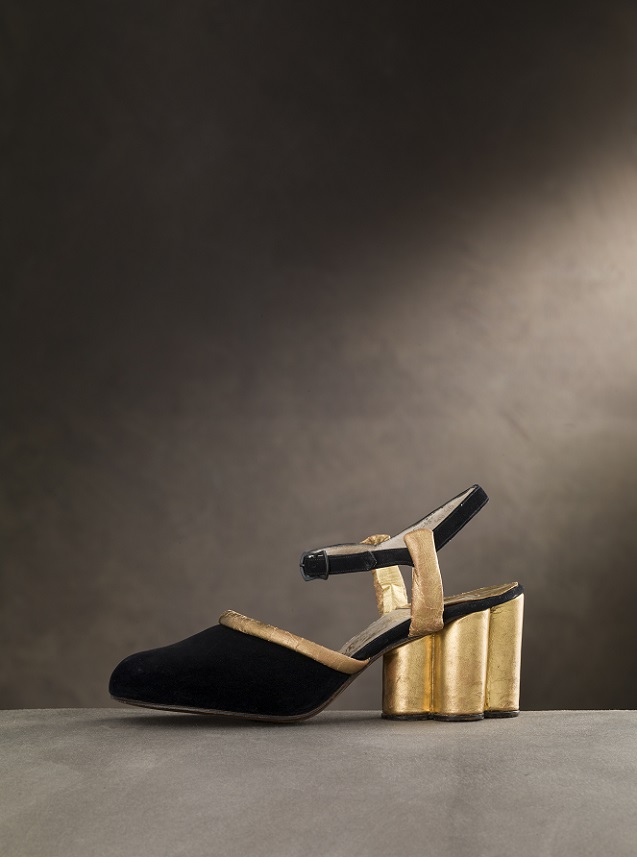 Paul Andrew reinterpreted both of these historically iconic shapes for Pre FW2017, his first collection for Salvatore Ferragamo. For the SS2018 Pre-Collection, he has reimagined them again, introducing new proportions and a unique mix of luxurious and high-tech materials. “No lover of shoes and shoe history could resist the fatal attraction of revolutionary models and details, like the “F” or the “Flower” heels from the Ferragamo Archive,” Noted designer Paul Andrew, Director of the company’s Core division, Salvatore Ferragamo women’s shoes. “They are revolutionary inventions that transformed the very concept of shoes. The heel became the essential feature, no longer as mere Support for the foot, but as a director behind the wings offering a new silhouette for a woman’s step. These are artistic breakthroughs with a technical heart and today I am thrilled to pick up where Ferragamo left off, continuing research into new high-tech solutions and working with unexpected material combinations and updated elements. It is always a surprise when I immerse myself in this tradition. A tradition that ironically appears to have come from the future.” 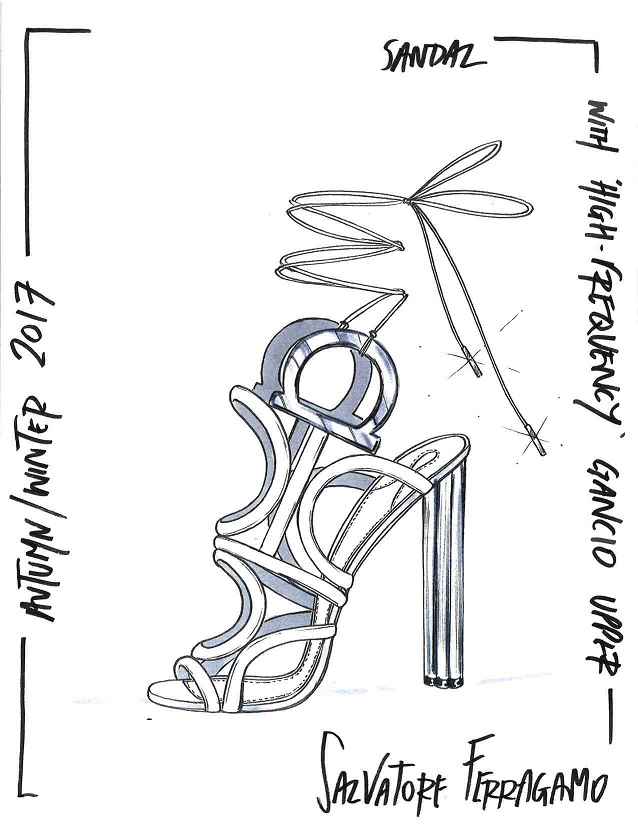 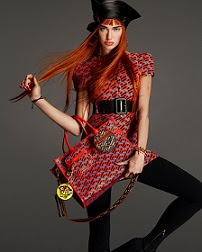