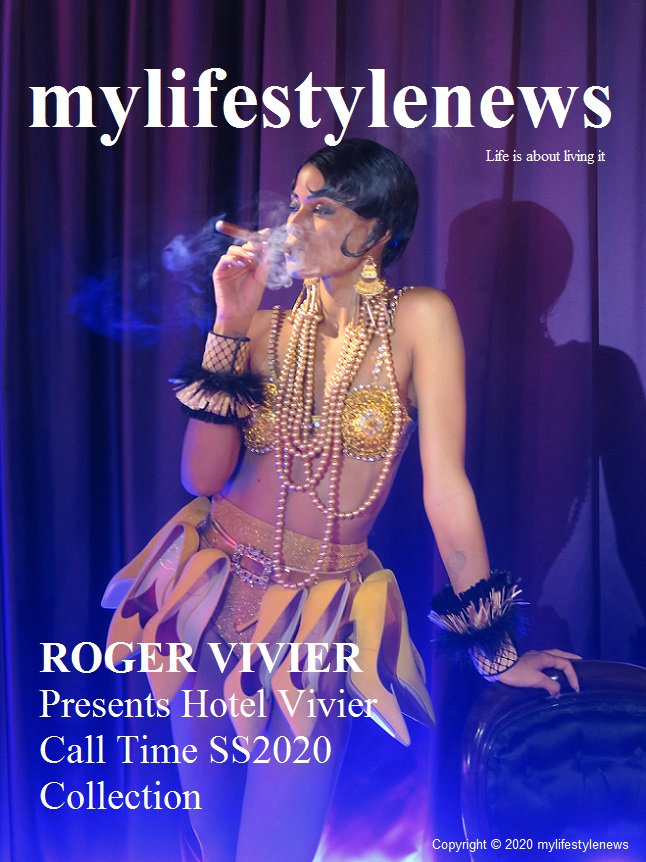 From the women of the arts who served as muses for Hotel Vivier, to the dreams of women that inspired Daydream Vivier, Maison Roger Vivier welcomes you to a new fantasy world. 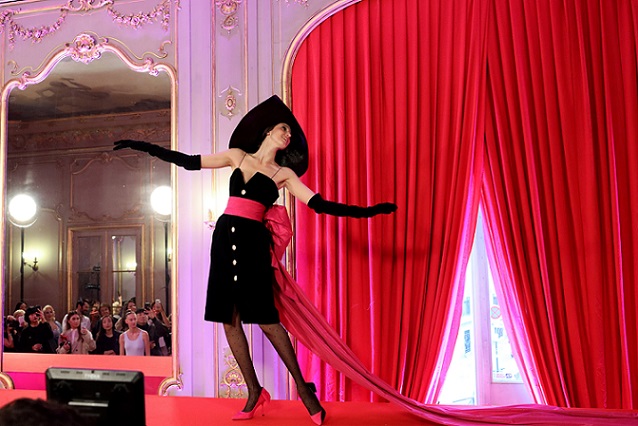 This SS2020, Creative Director Gherardo Felloni invites you to explore the mysteries behind the stage in Hotel Vivier Call Time. “I have always been inspired by theater, musicals, the cabaret,” he shares. “Performance is always present and, this time, I want to show the guests of Hotel Vivier the part that is not shown in every performance, the part that is usually hidden behind-the-scenes.” 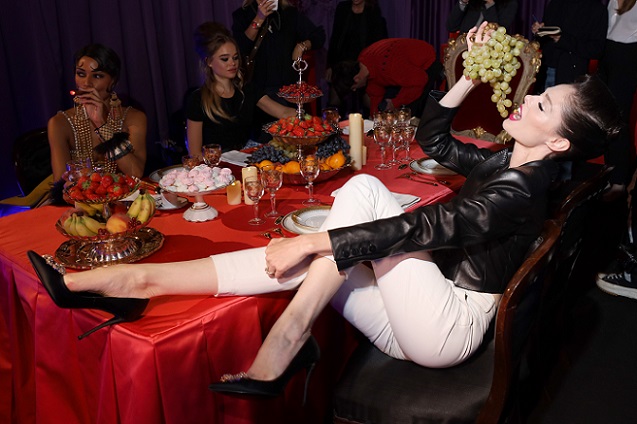 A mythical hotel where fantasy crosses over to reality, Hotel Vivier Call Time features different women, inhabiting different backstage rooms, who are preparing for the performance of their lives. 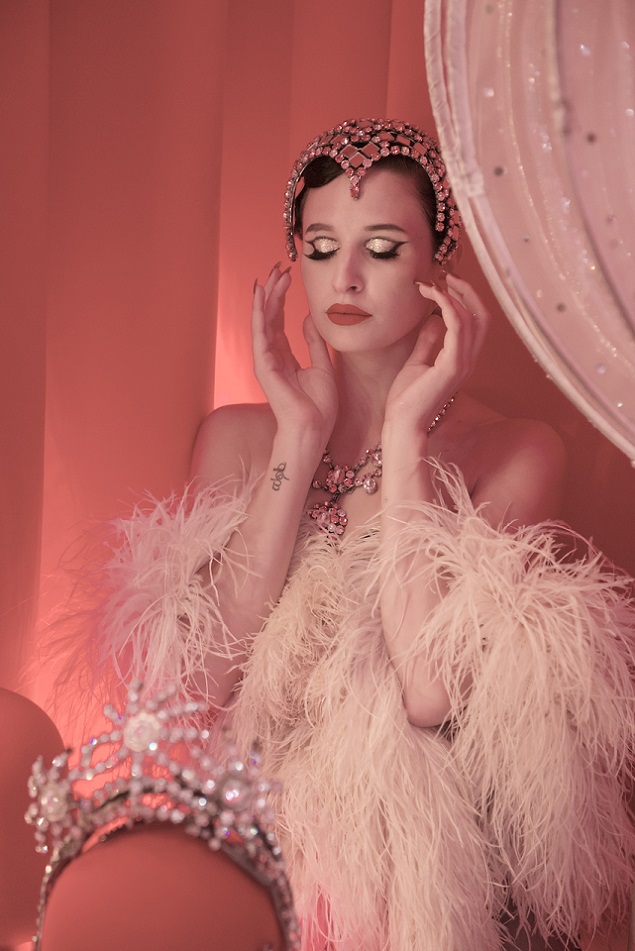 There are the showgirls, rehearsing for the cabaret and the young dancers with their teacher, perfecting a routine before their show performance. 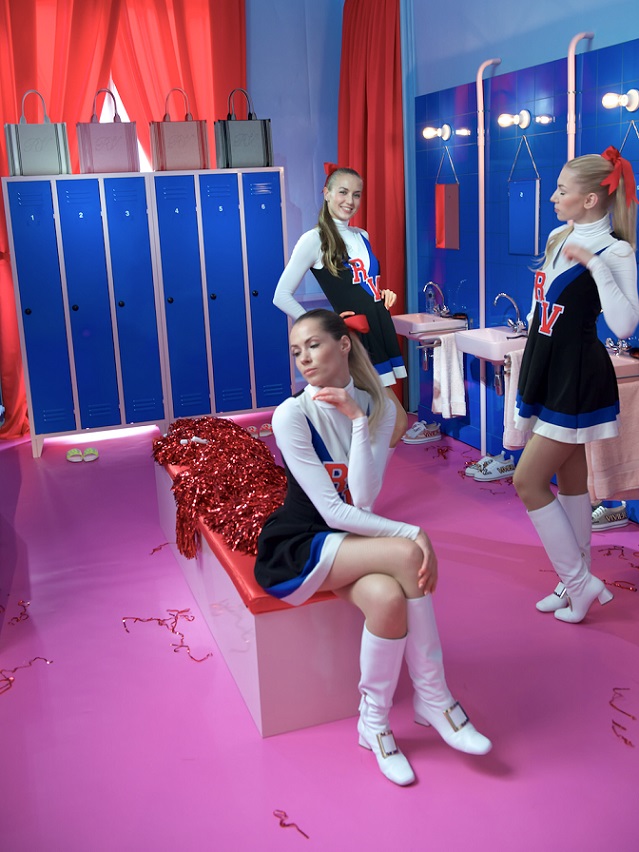 In another backstage room are the cheerleaders, busy with their makeup, while silently challenging each other – a scene that was inspired from the Glee cast’s performance of “I Say A Little Prayer” by Aretha Frankiln. 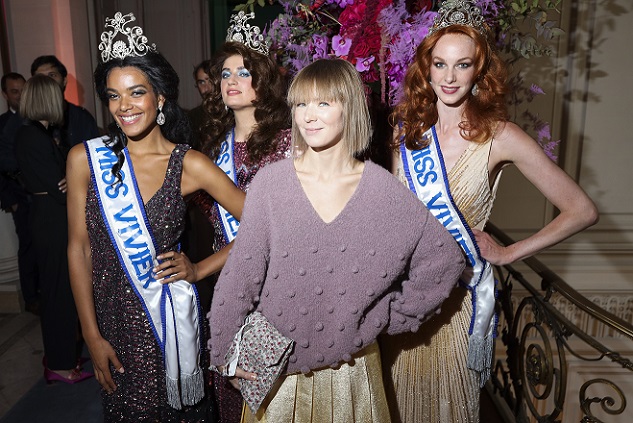 There are the Miss Universe candidates with their crowns, fighting to be the most beautiful. In a magical room, supermodel Anna Cleveland is with a fashion designer, preparing for the catwalk. 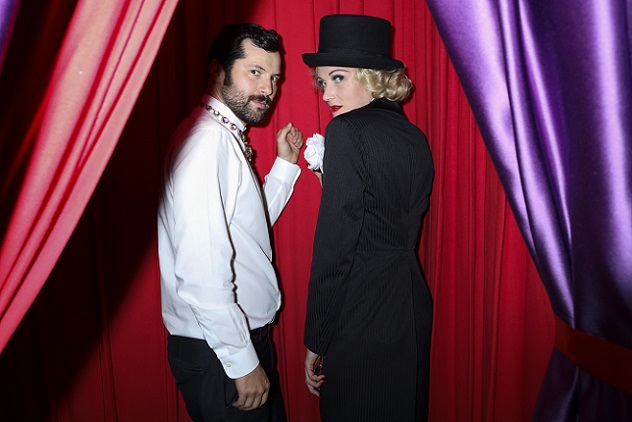 This room represents the Maison’s ties to fashion and haute couture. These two characters are Felloni’s homage to French fashion. The supermodel, who represents the glamour of Paris. And the fashion designer, inspired by women such as Elsa Schiaparelli, who moved from her native country to Paris and greatly influenced the history of fashion. 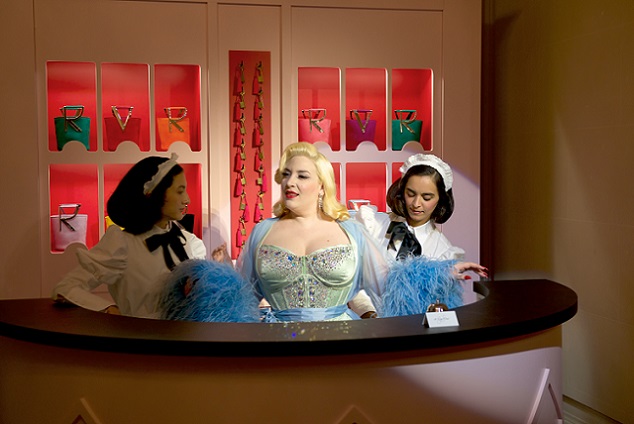 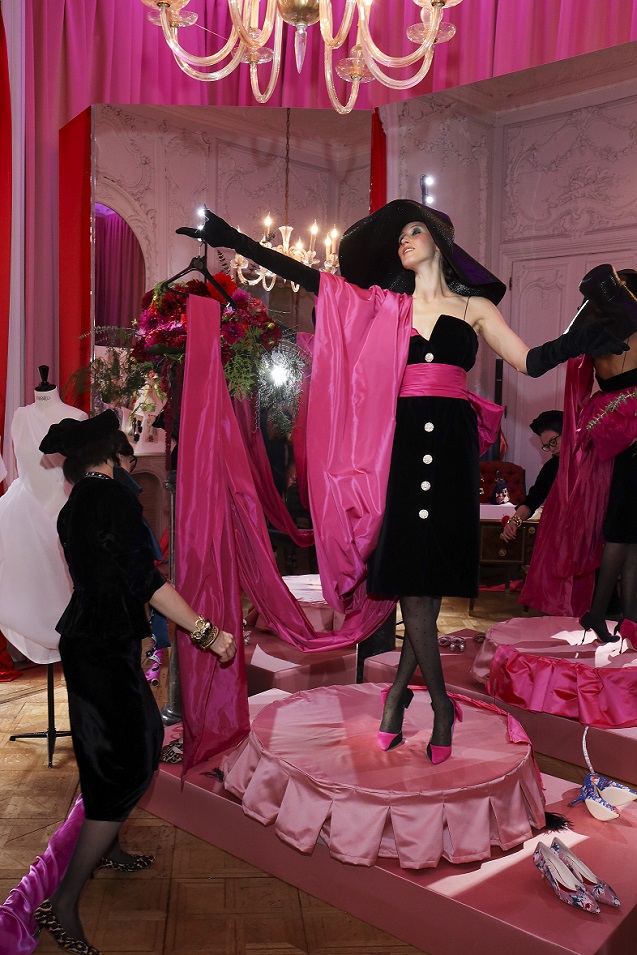 Aside from these personalities, Hotel Vivier Call Time also introduced newly imagined places such as Café Vivier, a real Parisan café where guests can try an authentic crêpe Suzette. 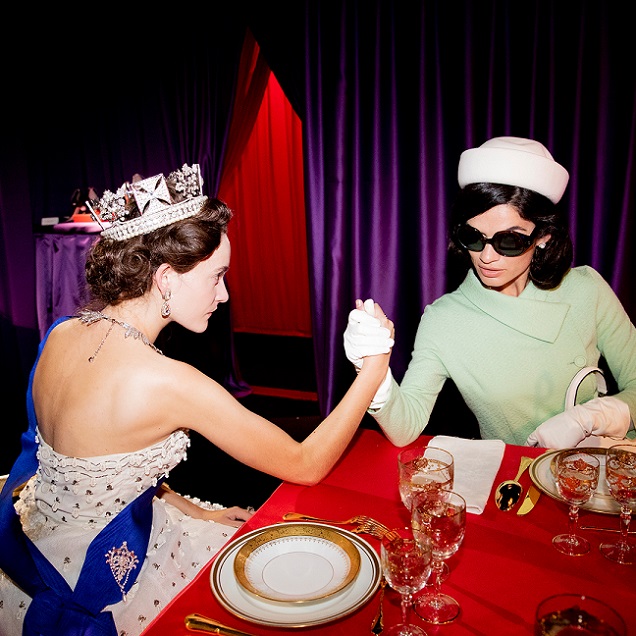 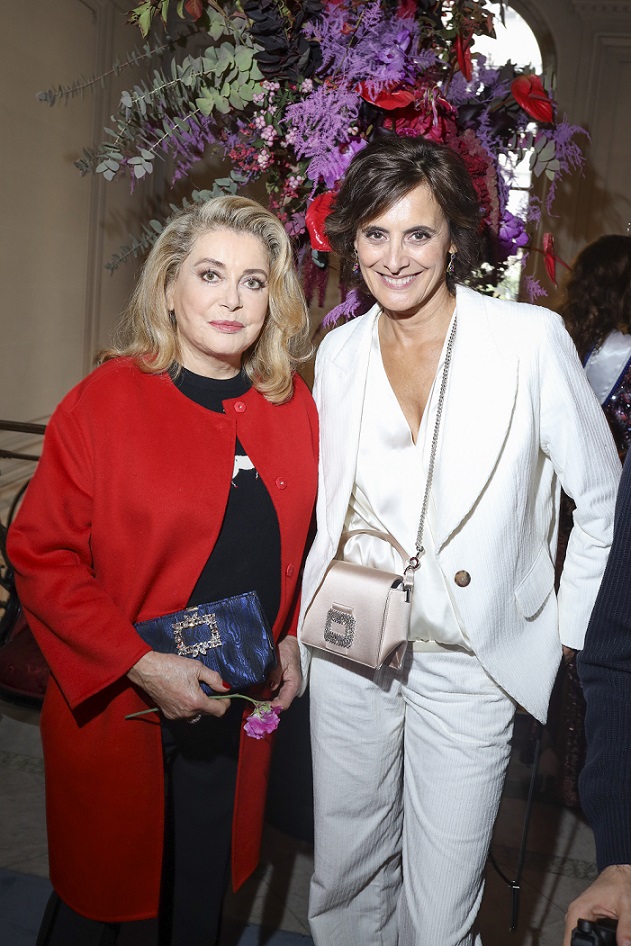 Given Felloni’s love for fantasy, imagery and a cheeky sense of humor, Hotel Vivier Call Time brings together an eclectic cast of characters who will treat audiences to a surprise finale as the call time comes around, bringing them to a metaphorical and ironic fashion show. 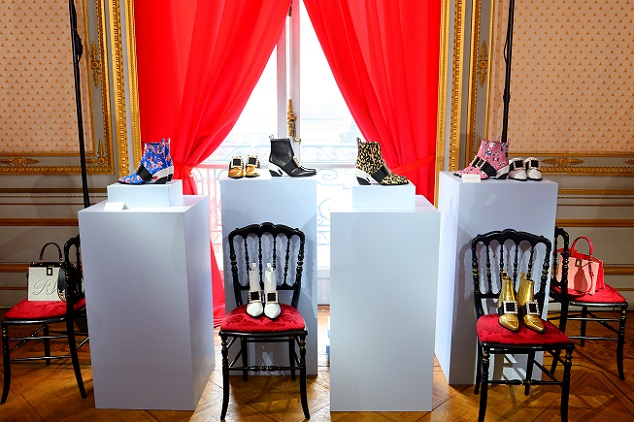 The Viv’ Clogs from Felloni’s SS2020 collection have come a long way from its traditional origins and are now given a fresh take, becoming an emblematic style for the Maison. The Viv’ Clogs are handcrafted in wood and come in classic black, brilliant silver and light pink, with a miniature crystal buckle that gives it that refined Vivier touch. 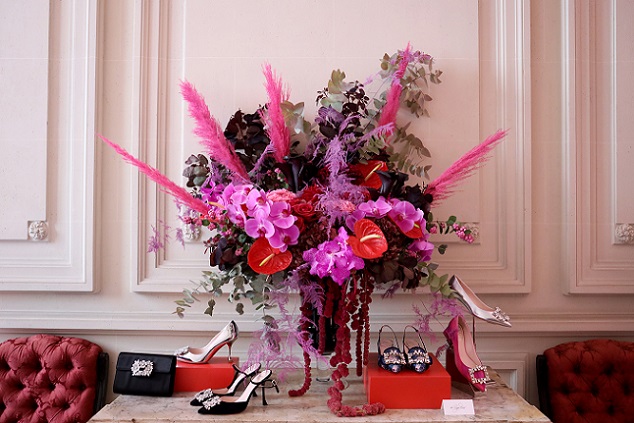 Eveningwear also remains at the forefront of the collection with two sandals: the Vivier Queen Sandal and the Tiki Viv’ Mule. Both inspired by the archives and the Maison’s rich history, the Vivier Queen Sandal, takes inspiration from HRM Queen Elizabeth II’s coronation shoes, made by Monsieur Vivier in 1953. The Vivier Queen Sandal features a reinterpretation of this intricate design, with a delicate fleur de lys motif and a crystal-encrusted heel, fit for a queen. 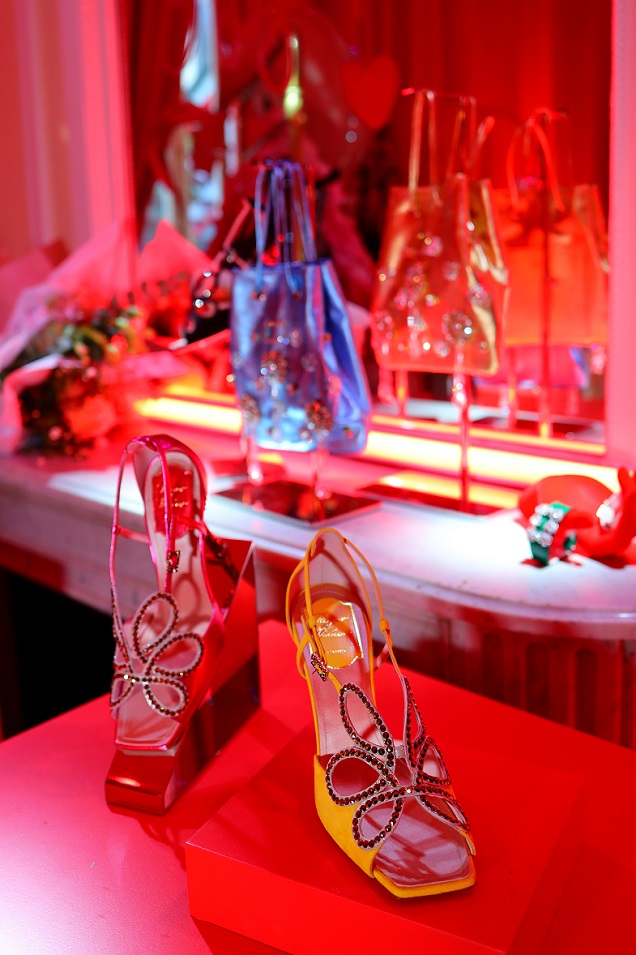 For the Tiki Viv’ Mule, the shoes of the season for SS2020, Felloni takes his cue from the infamous heel that Monsieur Vivier designed for Marlène Dietrich, which features the iconic boule strass, a small sphere covered in crystals, on the heel. These sandals highlight the elegance of natural materials, such as feathers and raffia, expertly handcrafted by artisans to create a fringe that fans out to shape a dramatic silhouette. 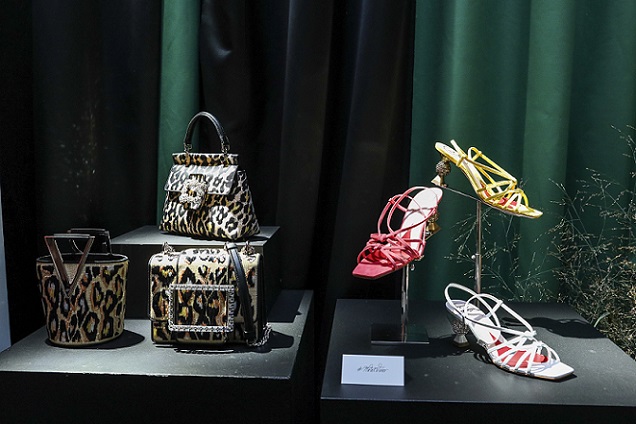 The Tiki Viv’ Mule sandals come with a low, 65mm kitten heel and in color combinations, such as black and beige neutrals, and lavender and pink pastels – excellent choices for the warmer months ahead. 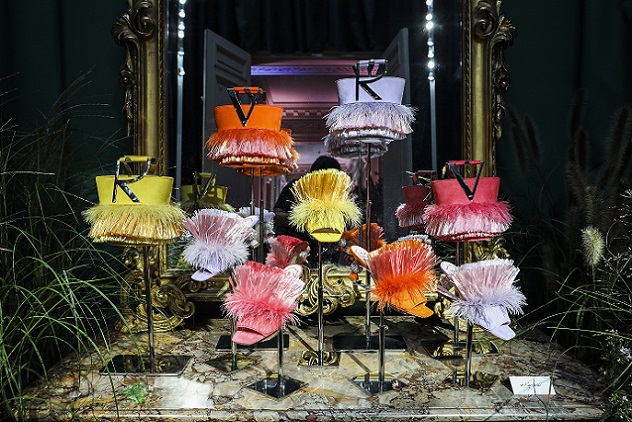 The collection’s bag of the season follows the same summer vibe. The Tiki Viv’ Mini Bag features a combination of straw fringes, feathers and suede, and comes in a color palette that ranges from bright pink and pastels to black and beige. With R and V logo metal handles and a chain strap, which can be worn on the shoulder or across the body, the Tiki Viv’ Mini Bag is the perfect accessory to take to the beach and beyond.