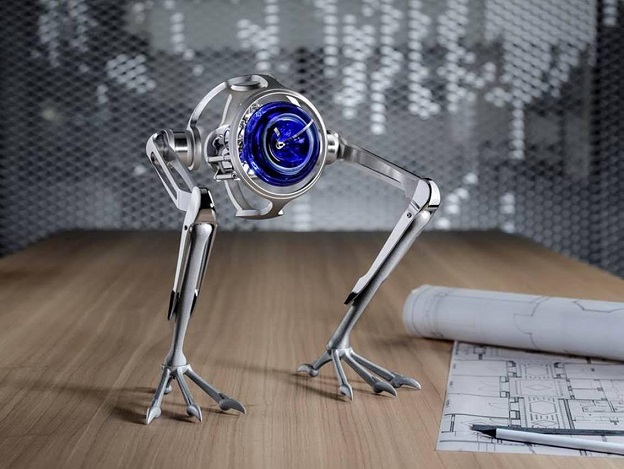 They say that art begets more art; that the act of creativity continues to generate and inspire other creations in turn. This is certainly true in the case of T-Rex, the 11th collaboration between MB&F and Switzerland’s premier clockmaker L’Épée 1839. A minimalist clock-face of Murano glass and steel, suspended between two jointed legs that end in taloned feet - T-Rex bears slight physical resemblance to the eponymous king of beasts. The name owes more to the aspects of design that reveal themselves to the close observer, such as the confluence of power and presence conveyed in the taut limbs. The literal time capsule formed by the spherical, skeletonised body is a subliminal yet insistent allusion to the fossilised bones that contain all we know of a prehistoric era. 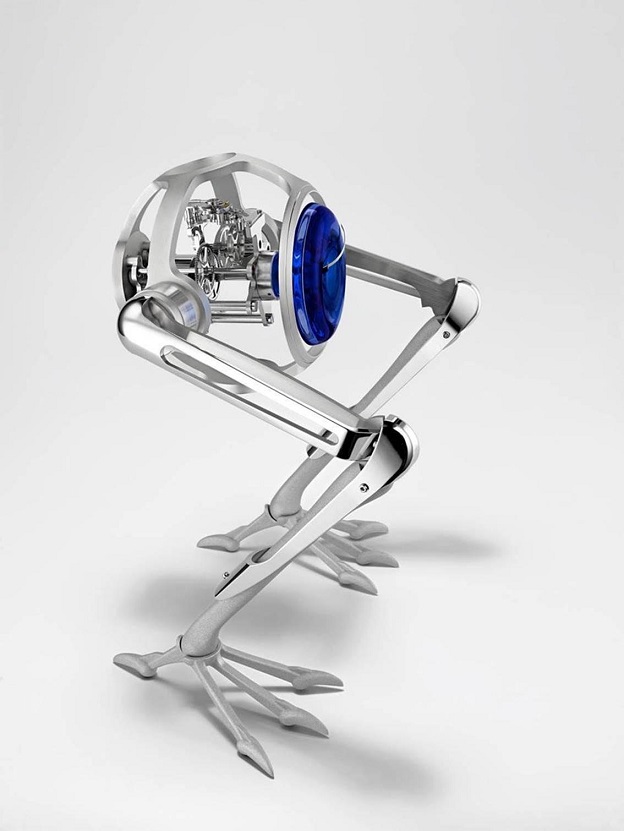 Two slim steel hands arch outwards from the centre of the Murano glass dial, indicating the hours and minutes. Behind the dial is a 138-component movement by L’Épée 1839, crowned by a balance beating at the rate of 2.5Hz (18,000vph). The clock is wound with a key at the back of the movement for a maximum power reserve of eight days, while time-setting is accomplished at the centre of the dial with the same key. T-Rex was first introduced to audiences earlier this year as a unique piece that had been specially customised for Only Watch, the world’s most high-profile charity watch auction. Previously, MB&F’s contributions to Only Watch had been taken from existing collections. Tom & T-Rex, the MB&F creation for the eighth edition of the auction, broke with tradition by preceding the collection from which it was taken. The point of differentiation is in the name: Tom & T-Rex comes with a rider who represents the children suffering from Duchenne muscular dystrophy, who benefit from the funds raised by Only Watch. 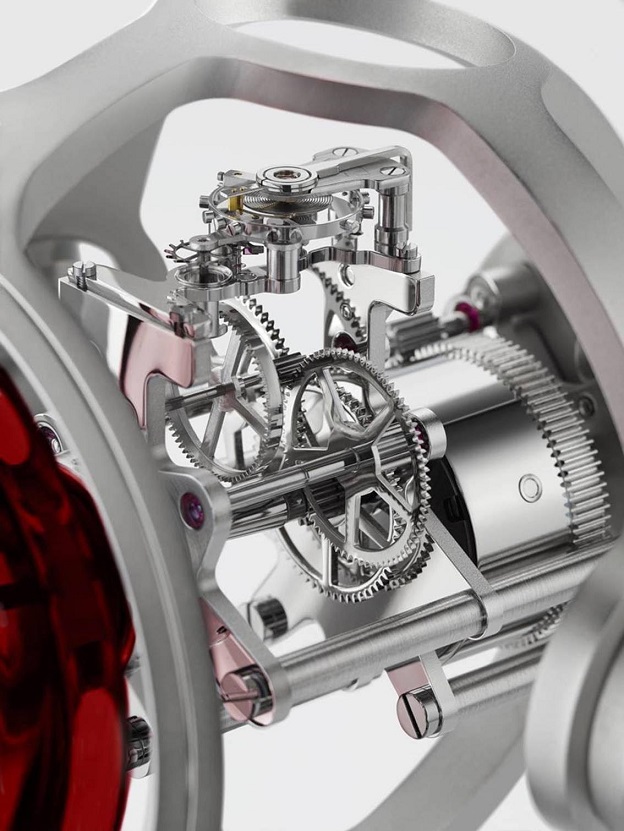 Through the Only Watch iteration, T-Rex has been shown to be perfectly capable of procreation. Looking back in time, its own point of genesis lies within an objet d’art from the desk of MB&F founder Maximilian Büsser, a whimsical combination of a shiny round holiday bauble mounted on metal appendages shaped like birds’ legs. When the time came to create the Co-Creation that was to become T-Rex, Büsser and designer Maximilian Maertens coalesced on this objet. Somehow, this oddly thought-provoking blend of organic and inorganic elements incubated in the mind of Maertens, becoming bigger, stronger, more fantastical - more MB&F! The legs of T-Rex are modelled directly on actual Tyrannosaurus Rex bones, using 3D scans of fossilised dinosaur skeletons as references to create verisimilitude in the final design. Alternating polished and sandblasted segments allow light to interact with the legs in such a way that make T-Rex seem agile and coiled to move, although the entire clock itself weighs approximately 2kg and its joints are fixed in place for stability. Those with an affinity for the metaphorical will see a memento mori of sorts in T-Rex, and not just in its invocation of a long-extinct animal. T-Rex is a clock with legs and pretty fast-looking legs at that! - saying time can run away from us all. Better act quickly, while you can. Live life, make art. 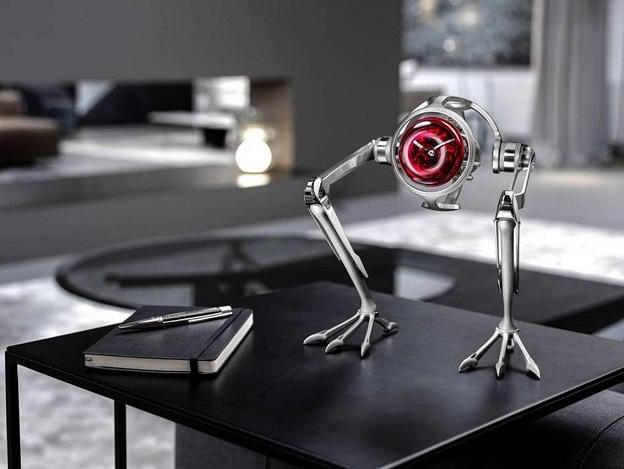 The Inspiration
Powerful and otherworldly, T-Rex was nevertheless drawn from a source both whimsical yet familiar. A quirky ornament on the desk of MB&F founder Maximilian Büsser, composed of a Christmas bauble perched atop two chicken legs. Members of the avian species are said to be modern-day descendents of the mighty dinosaurs of old, but the comic air of T-Rex’s inspiration had a long way to evolve before it came to fruition. Designer Maximilian Maertens was the creative incubator for the eventual rise of T-Rex as the 11th collaboration between MB&F and L’Épée 1839. The 1993 film Jurassic Park was a big influence on Maertens, being the first movie he remembered watching as a child. Said Maertens, “I just had the idea to do something with dinosaurs, and Max (Büsser) was very interested in biomechanical designs at the time, so we melded these two sources around his little desk sculpture and took the next step.” T-Rex is closely modelled on the actual skeleton of a Tyrannosaurus Rex, with Maertens studying 3D scans of dinosaur fossils to inject authenticity into the proportions and positioning of T-Rex’s legs. In the course of designing T-Rex, Maertens even came up with a little backstory to inform the process of developing the perfect balance of mechanical and organic visual elements. “The story takes off from ideas given to me by past projects of MB&F, that we have a pilot in his starship discovering new planets. Eventually he got so far out in space that the only way back to Earth was via a black hole, but it time-warped him back to the time of dinosaurs and the starship was fused with a hatching dinosaur egg. You see the remnants of the starship in the body of the clock and the movement, the dinosaur appears via the legs, and even the black hole remains part of the design, via the dial that sinks inwards towards the centre where time originates.” 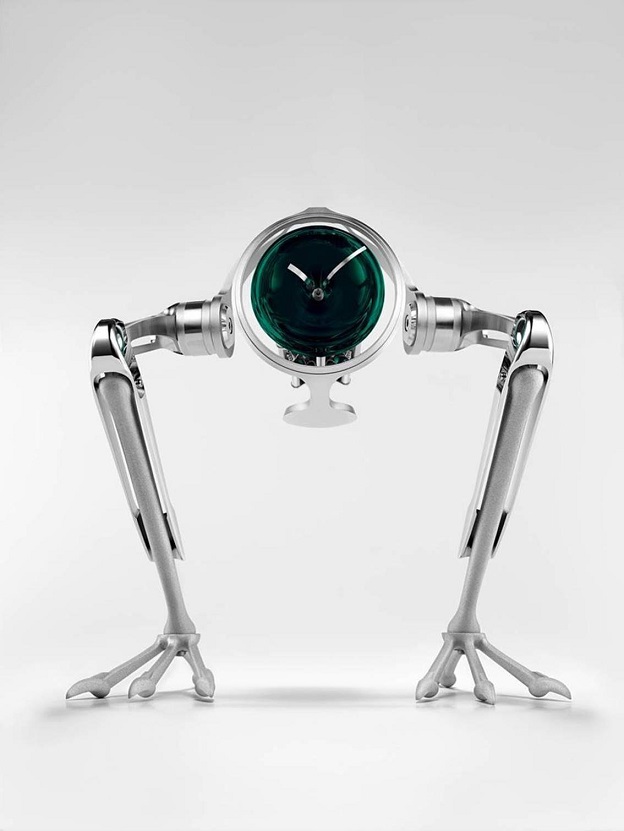 The Movement and Body
T-Rex is powered by a 138-component movement, designed and produced in house by L’Épée 1839, and finished to the very highest standards of traditional Swiss clockmaking. At the very top of the hand-wound movement, clearly visible through the skeletonised clock body surrounding it, is a balance beating at 2.5Hz (18,000vph). The eight-day power reserve is rewound directly via the barrel axis positioned at the back of the movement, while time is set through the centre of the dial. Both actions are taken with the same key. Hand-blown Murano glass forms the clock dial of T-Rex, a material that both MB&F and L’Épée 1839 became thoroughly familiar with in the course of creating Medusa, their 10th collaboration. T-Rex comes in variations of green, deep blue and red Murano glass dials, which are vividly coloured with metallic salts via age-old techniques of glassblowing. The 30-cm tall T-Rex is made of stainless steel and palladium-plated brass and bronze, weighing approximately 2kg distributed over two finely sculpted feet. T-Rex comes in three limited editions of 100 pieces each, with Murano glass dials in green, deep blue or red.

Email ThisBlogThis!Share to TwitterShare to FacebookShare to Pinterest
Labels: 《ART AND DESIGN》, 《WATCHES》