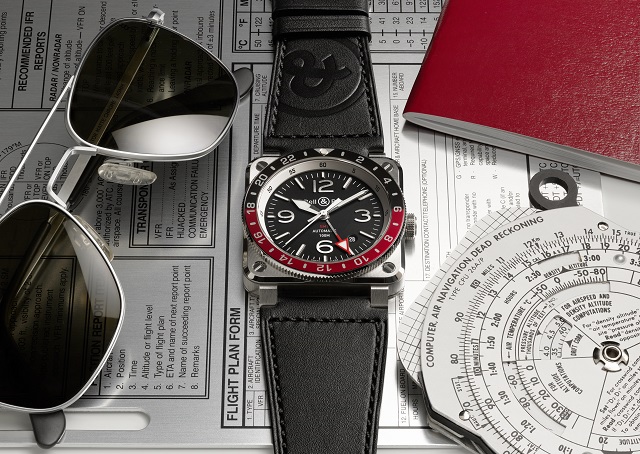 2021 is the year of further strengthening the bond with its core business and 1st passion, Aviation. It is also the year Bell & Ross rethinks its GMT Instrument and launches a new version. True to its iconic square flagship model, the new BR 03-93 GMT replaces the existing version. Redesigned, more modern, more functional, more readable. This “tool watch” goes back to basics in terms of design and shape which were influenced by two keywords: functionality and legibility. Horologically speaking, the GMT function was first developed to meet with both the needs and specifications of aviators and especially pilots. The acronym GMT is used to indicate a second time zone but not necessarily from Greenwich. This complication has since been popularized and is nowadays commonly used by travelers. Bell & Ross has made aviation, particularly aeronautical instruments, its specialty. Its designs very often match specifications created by professional users.In 2007, the brand launched its 1st GMT Instrument, the BR 03‑51 GMT TITANIUM. Two complications at the service of the long-haul traveler: a second time zone and a large date for optimum readability. The use of high-tech materials like brushed titanium for the case and carbon fiber for the dial optimizes the watch performances. A carbon version was released later in 2013. This complication has subsequently been chosen to equip the Vintage series. Following on from the BR V2-93 GMT 24H launched in 2018, Bell & Ross has completed its range of watches targeted at modern frequent travelers - both professionals and civilians - in search of a chic and functional timepiece. The BR V2-93 GMT Blue – launched in 2020 and picked by Air France pilots – adorns a galvanic blue sunray dial as a nod to the world of air travel and long transatlantic trips, while the second-hand counterweight is subtly styled in the shape of an aircraft. An indispensable tool for aircraft pilots and an ally for globetrotters, but it is also useful for those who are currently experiencing to keep track of multiple time zones simultaneously. Certainly, useful when travelling between different time zones, this function is worth having if your activity occurs in different time zones. It is the ultimate utilitarian tool watch when working remotely and wanting to stay in sync with an overseas office or when you need to schedule meetings across time zones.
Posted by mylifestylenews at 12:00 AM