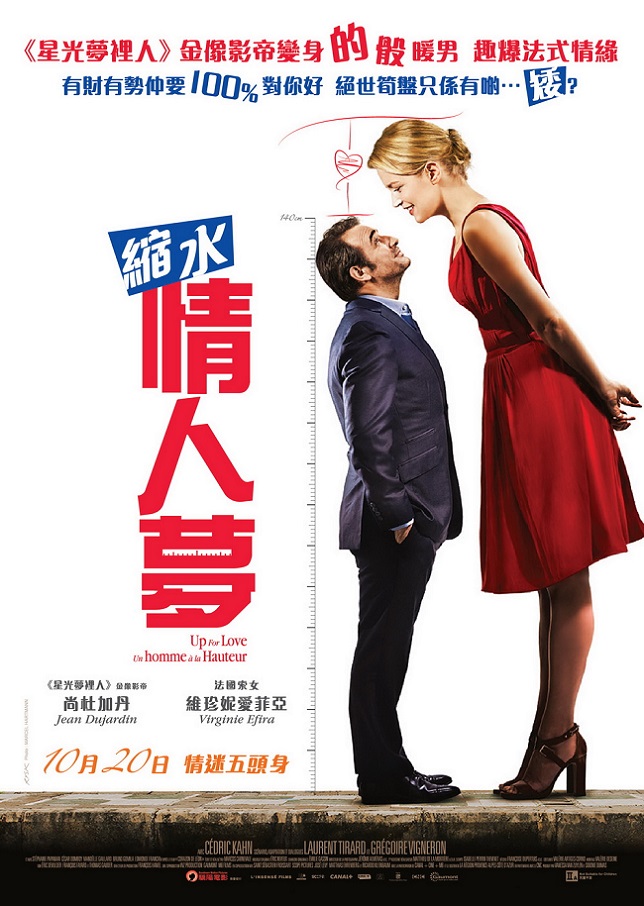 When someone picked up your phone while you were in the middle of the fight with your ex, and call you back and tell you how wonderful you are, would you be up for love? This is how the movie <Un homme a la Hauter> - A man's height <Up For Love> started. A man with what it takes from his look, 100% monogamy and wealthy, how could one possible resist?But his height as a midget is his only constraint for being the best company to your life. Stars Academy Award winner Jean Dujardin and French Sweetheart Virgine Efira, together they takes the challenge of being this rare couple from the public eye who opposed such relationship.

<Up For Love> is a remake from a successful Argentinean film <Corazón de León> by Marcos Carnevale that tells the story of a pretty woman’s love for a charming man… who measures 4 foot 7.  Since the film was typically “South American”, it was a real tearjerker - a lot like a telenovela and Screenwriter/Director Laurent Tirard thought it would be a good idea to rewrite it and Europeanize it a little and to maintain some poetic distance, so that the film would always remain a comedy. French Romance Comedy may differ from the mainstream Hollywood classics from its French humor being chucking around and culture especially for not being able easily understand as to how and why? But the witty and charismatic performance from both Dujardin and Efira broke the ice and brought one step closer to the audience by looking up in their relationship without much barrier but unfortunately there are much human's criticism and prejudice to prove that such relationship (physically reduced to 4ft 7 inches) is the main concern among all and to accept that good things can come in small packages.

Like it or not the sanctimonious scores could lead to a love hate ending by using too much of chintzy tonal misfire. Jean Dujardin was cast for reducing a famous actor who has a certain sex appeal and obvious charisma to 4 foot 7, would contribute to the jubilatory feel of the film.  Even Dujadin was curious about how he could play it technically and said to himself that this might be the only time in his life when he could measure 4 foot 7 and he was charmed by the idea of playing a rather perfect little person who does not inspire mockery or ridicule. However, It is more silly than funny and yet both beautiful faces of Dujardin and Efira sells and make believe that love is still in the air.